Fakest Stock-Market Rally Ever: The Next Leg Down Is Coming

Historically, bear-market recoveries are measured in months or years, not weeks. Systemic problems in the global economy aren’t resolved quickly, but you wouldn’t know it if you look at the recent stock charts. The coronavirus crash is already more than halfway retraced, and it defies all logic.

The breathtakingly swift rebound was led by the same tech-sector stocks that brought the markets to such lofty valuations in the first place. You know the names: Microsoft, Apple, Amazon, Alphabet (also known as Google), and Facebook. Twenty years ago the frontrunners were more diversified (Walmart, General Electric, etc.) but now they’re all concentrated in one sector.

This handful of tech names are perceived as safety stocks nowadays because they have deep cash reserves that supposedly will get them through this crisis. The problem is that out-of-work Americans aren’t willing or able to buy $1,200 iPhones anymore. Even if they wanted to buy them at that price, factory shutdowns make it difficult to produce them.

In any case, the entire large-cap stock market shouldn’t rely on such a small number of leaders, but that’s exactly what’s happening now. If you thought that the lack of market breadth and participation was severe before the pandemic, get ready for a shocker because it’s even worse today.

The top five holdings in the S&P 500 – the same technology stocks mentioned earlier – constitute nearly 21% of the weighting of the index. That’s a record for the S&P 500 in terms of weighting concentration. The previous peak for the top five stocks was back in the year 2000, when their total weight was 18% of the S&P (and we all know what happened to the stock market that year). 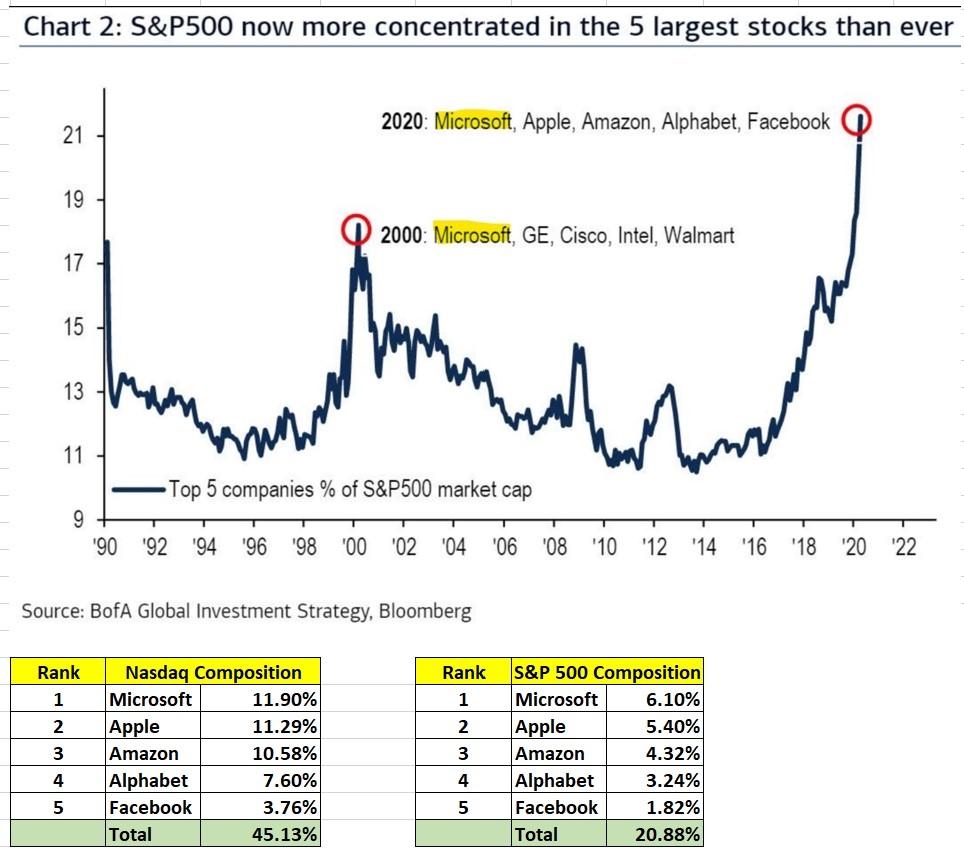 In the tech-heavy NASDAQ it’s even more concentrated, with the top five holdings representing 45.13% of the weighting of the index. A repeat of the 2000 dot-com bubble burst is inevitable even though most analysts and retail traders would believe that this utterly imbalanced market is impervious to sustained drawdowns.

Netflix is another good representation of today’s skewed markets. If Netflix stock had existed in 2000, surely its valuation would have been stretched beyond belief before the unavoidable snapback to reality.

Amid this weird, antisocial “new normal,” Netflix stock has gained 42% during a month of lockdowns and extended binge-watching sessions. Judging by its market capitalization ($185.6 billion), Netflix is now bigger than Exxon Mobil ($182.84 billion market cap), IBM ($106.72 million), and Costco ($140.39 million).

Seasoned investors who remember the pervasive euphoria and the lopsided market of 2000-2002 will hopefully see the writing on the wall here. Newer traders need to know that the omens of a second and much deeper leg down in the stock market are all here, plain to see if we’re willing to open our eyes. 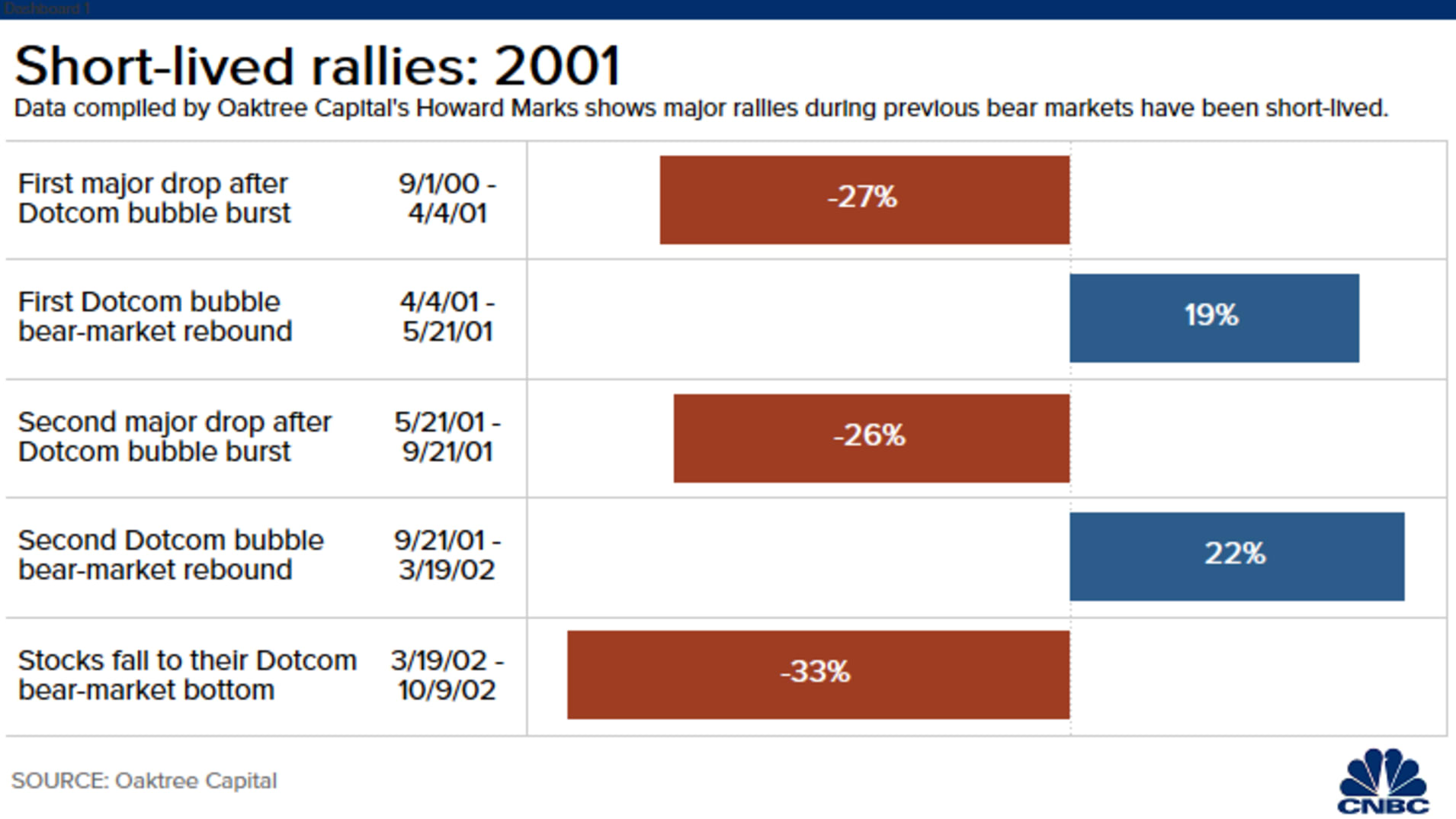 What many people don’t seem to appreciate is the potential for sharp, persuasive bear-market rallies. What’s happening now is a frame-by-frame replay of the dot-com collapse. Retracements to the upside feel great while they’re happening, but they’re typically short-lived as inexperienced investors get suckered into an ill-timed feeling of relief.

Oaktree Capital Co-founder Howard Marks explained how in both 2000-2002 and 2008-2009, “the first and second declines were followed by substantial rallies… which then gave way to even bigger declines.” Using history as a guide, Marks concluded that the “markets may well be considerably lower sometime in the coming months.”

Marks isn’t the only one advising caution now. DoubleLine Capital’s “bond king” Jeffrey Gundlach posits “a takeout of the March lows” as “the base case” for stocks, while Bleakley Advisory Group CIO Peter Boockvar anticipates a 20% pullback from the S&P’s current level.

Boockvar’s response is a sensible position in precious metals, which are highly regarded as crisis hedges. “What I am most comfortable in is a position in gold and silver in this world of negative interest rates and what’s seemingly unlimited money printing,” stated Boockvar.

That’s part of precious metals’ enduring value proposition: they’ll retain their value even when central banks devalue the currency and stock markets sucker in an ever-growing pool of inexperienced, unwitting investors with more cash than knowledge and more courage than wisdom.