For Furloughed Workers, the Government Recommends Doing Handyman Work for Rent and Hiring a Personal Attorney

With the government shutdown likely to continue into the new year, the ripple effect is being felt by Main Street while our elected leaders squabble over border wall funding and other issues. Workers at federal parks, the Coast Guard, NASA, the TSA, and other governmental employers are left in a holding pattern, struggling to make ends meet while our politicians fuss and fight.

Thankfully, our trusty government has a recommendation for the nearly 800,000 workers impacted by the shutdown. The Office of Personnel Management tweeted out a letter template to furloughed employees which they could “use as a guide” when dealing with their landlords and other creditors:

No, this is not a Saturday Night Live sketch; it’s 100% real despite its comedic value. In an ultimate “let them eat cake” slap-in-the-face moment, the Office of Personnel Management suggested that furloughed employees should bargain with their landlords, and even offer to do maintenance work in lieu of rent.

“I would like to discuss with you the possibility of trading my services to perform maintenance (e.g. painting, carpentry work) in exchange for partial rent payments,” reads the sample letter that furloughed workers are supposed to send to their landlords with a straight face. The subtext I’m getting from this is: brush up on your handyman skills or face homelessness, federal workers!

As the shutdown entered its second week on Saturday, there’s been little if any progress toward ending the standoff between President Trump and the Democrats, and the new Congress will not reconvene until January 3. If the shutdown continues, which seems highly likely at this point, all workers in nine federal departments as well as dozens of agencies will miss their next paycheck, which was supposed to be issued on January 11. 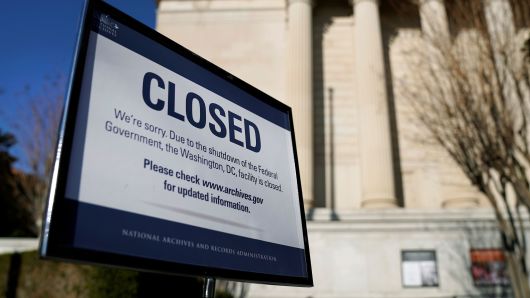 It has been estimated that 400,000 federal employees are currently working without pay and an additional 350,000 have been furloughed. The shutdown, which began on December 22, will not affect the Department of Defense but has impacted other departments, including the Justice, Homeland Security, Interior and Treasury Departments.

And by the way, you can go ahead and cancel your early-January visit to any Smithsonian museum or research centers, or to the National Zoo, as these will close starting on January 2 unless the shutdown ends. Ditto for the National Air and Space Museum, the National Museum of African American History & Culture, and the Cooper Hewitt Design Museum in New York.

But let’s not stray too far from the Office of Personnel Management’s super-helpful tweet and letter templates – the ones simultaneously recommending doing handyman work to get by while also hiring a personal attorney. While the government’s response to the real world’s struggles have been nothing short of comedy gold, the Twitter replies have also been quite humorous. Here’s my personal fave:

Swing and a miss, indeed. And as long as the disconnect between the politicos and the people widens, the government will continue serving its agenda of elitism in a modern America that’s divided not down the middle, but into the 1% and the rest of us.