For Your IMMEDIATE Attention: GOLD Alert!

For some, the bear market was a brutal winter that crushed poorly-positioned mining companies. I’m not just referring to companies, but investors alike.

There are some investors that are so scarred from what took place during the bear market that they have dismissed the precious metal sector indefinitely.

I understand that. Everyone needs to make their own decisions when it comes to their own investments, but I would suggest that if you endured the winter, you might as well stick around and be part of the spring and summer seasons of the bull market cycle.

I hope my readers aren’t ignoring what we are seeing with $1,550 gold: I’ll remind you that we’re now 50% higher than when gold bottomed in December of 2015.

There have been loads of companies I’ve witnessed fall by the wayside and be consumed by the bear market. They ultimately folded and are not in a position to take advantage of the turnaround we are seeing in gold.

GoldMining has been one of the most resilient companies I’ve ever had the privilege of covering.

I’ve been covering this company for years, and I have true conviction in the long-term plan for GoldMining, which I believe is playing out right before our very eyes.

For this company in particular, the bear market was a fortune-building opportunity at insanely discounted valuations.

Starting off in Brazil with its former name, Brazil Resources, GoldMining has expanded and is now in 5 different countries in the Americas. 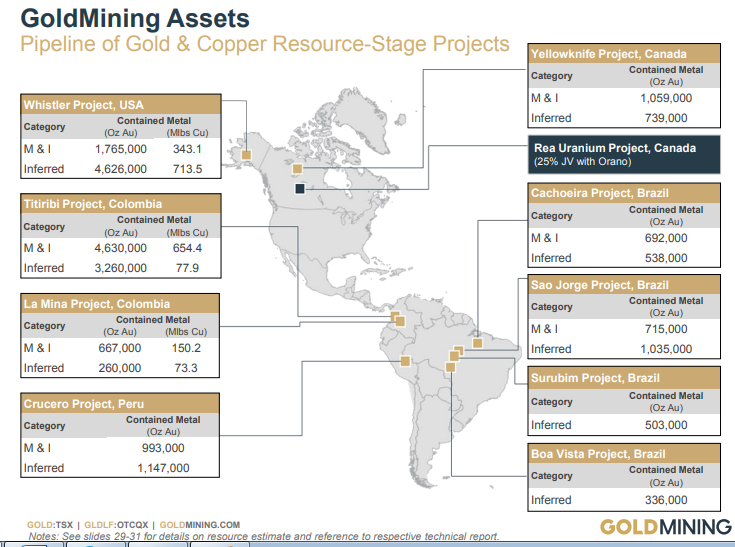 Tech reports are at www.goldmining.com

Some of you know and many may not, but Amir Adnani, Chairman of GoldMining, is a rare breed of mining magnate and one I’d like my readers to attach themselves to for YEARS to come.

Amir is making a name for himself and will be the man to thank when this story plays out.

Right now, the entire company is worth CAD$192 million, and just these projects returning to their previous peak 2011 valuations, will be a 4x return for investors, which I believe is a conservative projection considering I believe gold’s 2011 all-time high could be completely shattered in the next 12 months.

In fact, GoldMining’s resource on a per-share basis is the highest in the industry. With only 138 million shares outstanding, the company’s share structure is beautifully intact.

I would also add that GoldMining has $7CAD million in cash on hand and no debt.

The last time the company went into the market to raise money was all the way back in 2016, showing true resilience.

We’re talking about management that has been very conservative financially with its share structure and balance sheet.

The best example of this paradigm shift is with the optionality plays.

GoldMining has one of the LARGEST portfolios of total measured & indicated resources and inferred oz. across all projects when compared to its peers. 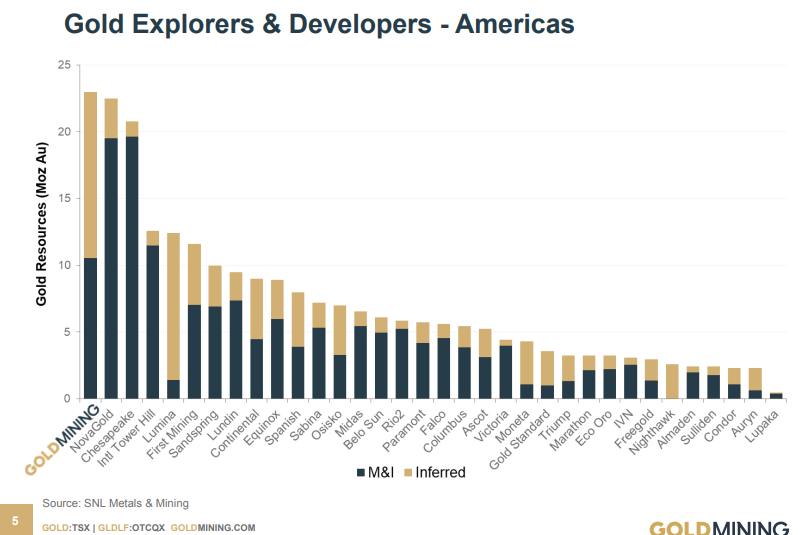 No matter how good an investment sounds, and no mater who is selling it, make sure you’re dealing with a registered investment professional. Use the free, simple search at investor.gov

This work is based on public filings, current events, interviews, corporate press releases and what we’ve learned as financial journalists. It may contain errors and you shouldn’t make any investment decision based solely on what you read here. It’s your money and your responsibility. The information herein is not intended to be personal legal or investment advice and may not be appropriate or applicable for all readers. If personal advice is needed, the services of a qualified legal, investment or tax professional should be sought.

Never base any decision off of our advertorials. Wallace Hill LTD (CrushTheStreet.com) stock profiles are intended to be stock ideas, NOT recommendations. The ideas we present are high risk and you can lose your entire investment, we are not stock pickers, market timers, investment advisers, and you should not base any investment decision off our website, emails, videos, or anything we publish.  Please do your own research before investing. It is crucial that you at least look at current SEC filings and read the latest press releases. Information contained in this profile was extracted from current documents filed with the SEC, the company web site and other publicly available sources deemed reliable. Never base any investment decision from information contained in our website or emails or any or our publications. Our report is not intended to be, nor should it be construed as an offer to buy or sell, or a solicitation of an offer to buy or sell securities, or as a recommendation to purchase anything. This publication may provide the addresses or contain hyperlinks to websites; we disclaim any responsibility for the content of any such other websites. Wallace Hill LTD has been compensated by Gold Mining Inc for this email coverage. We have entered into a one year digital marketing agreement and have received one hundred thousand Canadian dollars and stock options that vest over twelve months. We also own shares of the company and will never sell shares within four weeks of any email coverage.