For new investors, there’s nothing worse than piling into an asset after a breakout only to have the market pull it right back down again. This is how the unseasoned get shaken out: many will sell into the weakness, taking a loss and compounding their frustration.

This is precisely what’s happening with the gold and miner sectors now. The evident culprit is news-based: on Sunday, The Wall Street Journal had reported that the U.S. and China are close to finalizing a trade agreement – which, if this pans out, would bring months of investor uncertainty and tension to a conclusion.

Was gold’s rise all about tariffs and trade wars?

The report from The Wall Street Journal also stated that the trade deal (in its currently proposed form, at least) would have China lower its tariffs on U.S.-imported goods, while the U.S. would rescind most or all of the trade sanctions it levied against China last year. Additionally, the report said that President Trump and Chinese President Xi Jinping plan to meet in Florida later this month. 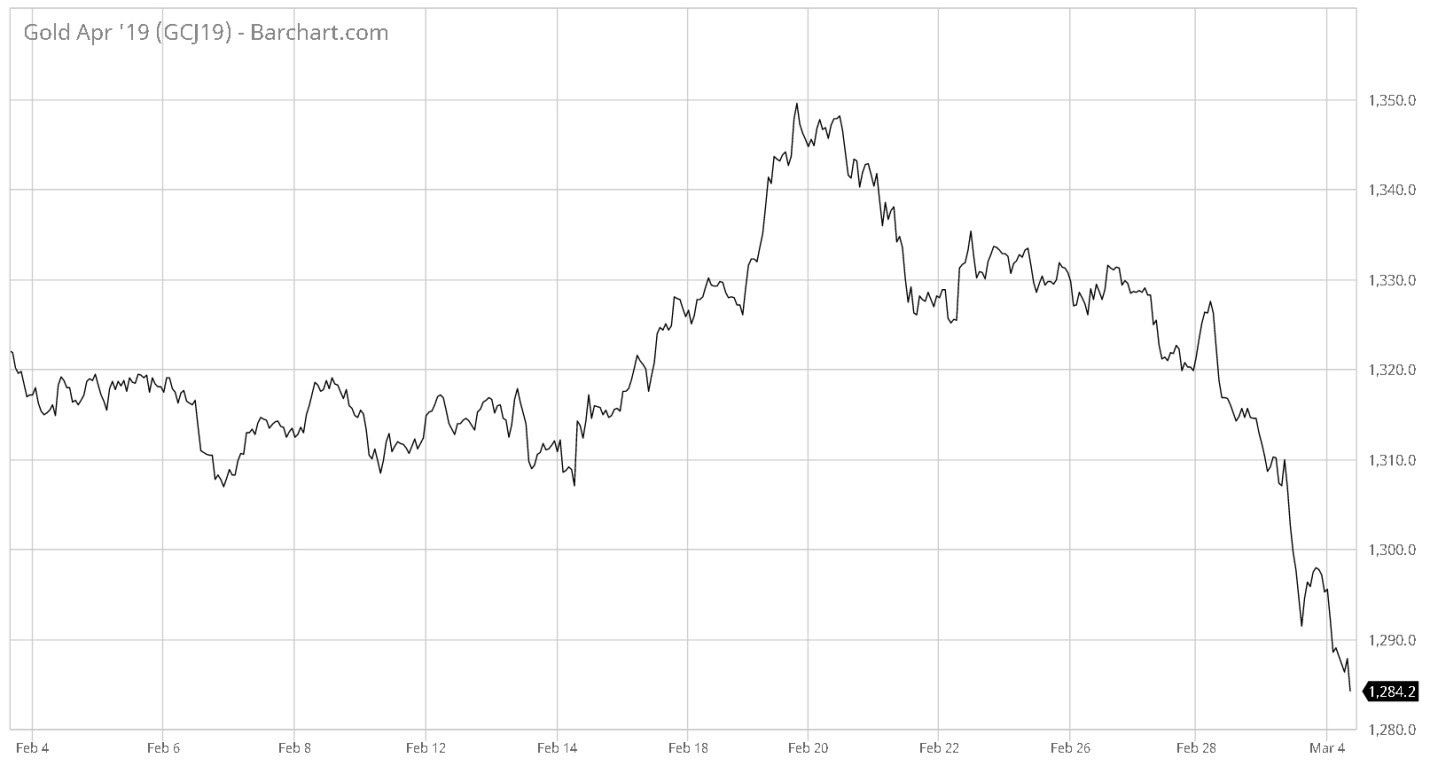 Gold futures had already dropped below the psychologically significant $1,300 mark on Friday, settling at their lowest price in a month and half. They were also down 2.6% for the week, the sharpest weekly decline since August. The rout accelerated into Monday, with gold leading precious metals and miners to fresh short-term lows.

Along with trade deal optimism, strength in the U.S. dollar – which posted its biggest monthly rise in four months – has also put pressure on gold. It’s also likely that the break below $1,300 triggered further selling from technically-oriented traders.

One catalyst no one can deny that is putting pressure on gold is the ongoing relief rally in the stock market.

The psychological damage is going to put some downward pressure on gold in the short-term, but suffice it to say that the doom-and-gloomers are out in full force. Hantec Markets analyst Richard Perry’s price-action analysis is not atypical: “The selling pressure of the past three sessions has completely changed the outlook on gold. From a decent-looking consolidation around the old breakout at $1,326, the strengthening downside has smashed through the 14-week uptrend.”

The gold mining sector, as represented below via the VanEck Vectors Gold Miners ETF, has followed spot gold into the abyss, mirroring gold’s decline almost tick for tick: 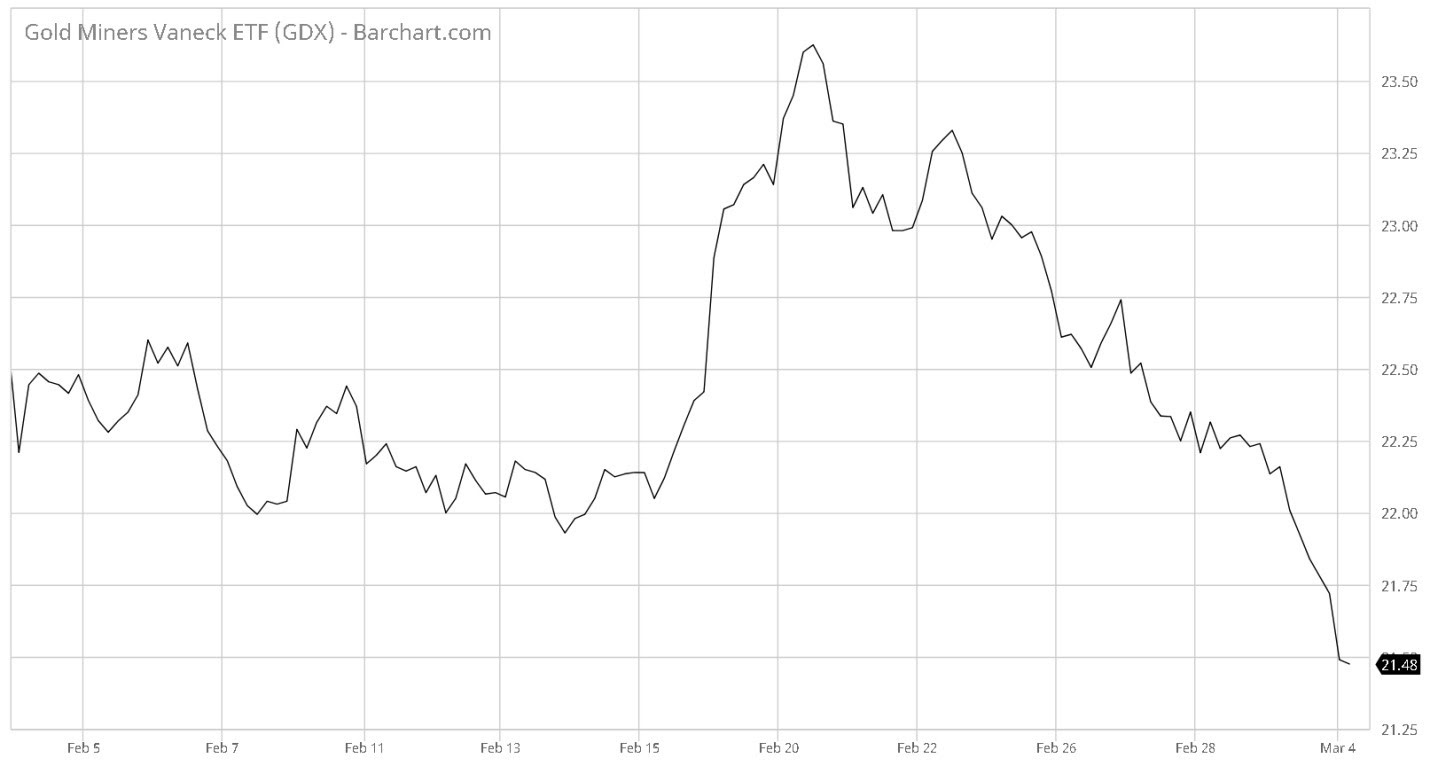 Along with gold’s selling pressure and the slow-motion resolution of the trade war, the mining sector is also dealing with its own war: the ongoing mergers-and-acquisitions battle taking place between some of the mining sector’s biggest players.

Newmont’s rejection of Barrick Gold’s proposal is the latest development in a recent string of consolidations (or at least attempted consolidations) in the gold mining industry. As you may recall, Barrick had agreed in September to buy Randgold Resources for $6.1 billion in stock, thereby forming the world’s largest gold miner.

What we’re witnessing now is a harsh blow to the mining sector – which, prior to the current rout, had jumped more than 11% over the last three months. As investors, our next step is to lick our wounds and reassess our positions – not from where we were a month ago, but from where we stand right now.

At the end of the day, what gold and miner bulls want to see is a reclaiming of the $1,300 level. We need to bear in mind that the market’s job is to frustrate impatient investors, and it will do this by testing key levels, head-faking multiple times before the “real” breakout occurs.

You don’t have to let the fake-out turn into a shakeout: if you truly believe in precious metals and miners as a sound investment, you can choose to let your capital reflect your conviction. After all, these are short-term price moves in the grand scheme of things – or as the time-tested adage says, “This, too, shall pass.”