PRECIOUS METALS INVESTORS: Are You Prepared For The Great Financial Enema? – By Steve St. Angelo (SRSRoccoReport.com)

While many Americans have been hornswoggled to believe President-elect Trump is going to make the United States great again, are you prepared for the greatest FINANCIAL ENEMA in history?  Of course not.  That is why we continue to see precious metals sentiment fall further into the cesspool.

I have to laugh at how much the gold inventories at the GLD ETF have declined in less than three months.  Since October 20th, 2016, the GLD has shed 17% of its supposed gold holdings.  No, I don’t care if the gold is really there.  It’s probably not, but that isn’t the important thing to focus on now.  It’s the sentiment.

Regardless, the falling gold price and falling gold inventories at the GLD ETF suggest that the mainstream investor is cashing in their GOLD CHIPS for LEAD SLUGS to wager in the broader markets.  Nothing like BRAIN DAMAGE gone wild in the good ole U.S. of A.

Now, when I say the GREAT FINANCIAL ENEMA is coming….. it is.  However, it is difficult to pinpoint a date and time when this will occur.  This is due to the ability of the Fed and Central Banks to continue sucking more and more blood out of the patient before he turns white and finally drops dead.

The reason the patient hasn’t died sooner is due to significant plasma transfusions right when the patient is ready to keel over.  This is the most difficult part for the “Financial doctors” to manage.  They want to continue bleeding the patient as much as they can, but they don’t want him to turn into a corpse prematurely.

Not yet that is….

Unfortunately, the economic and financial system is decaying much quicker than the public realizes.  And those who believe Trump will make positive changes for the country, may be sadly mistaken once he starts renovating the rat invested house.  As soon as President-elect Trump begins ripping apart the structure to see what is inside, his policies will likely speed up the collapse of the United States, rather than provide a new manufacturing utopia.

The reason I am so certain of the upcoming disintegration of the GREATEST PONZI SCHEME in history, has to do with the information in the following chart: 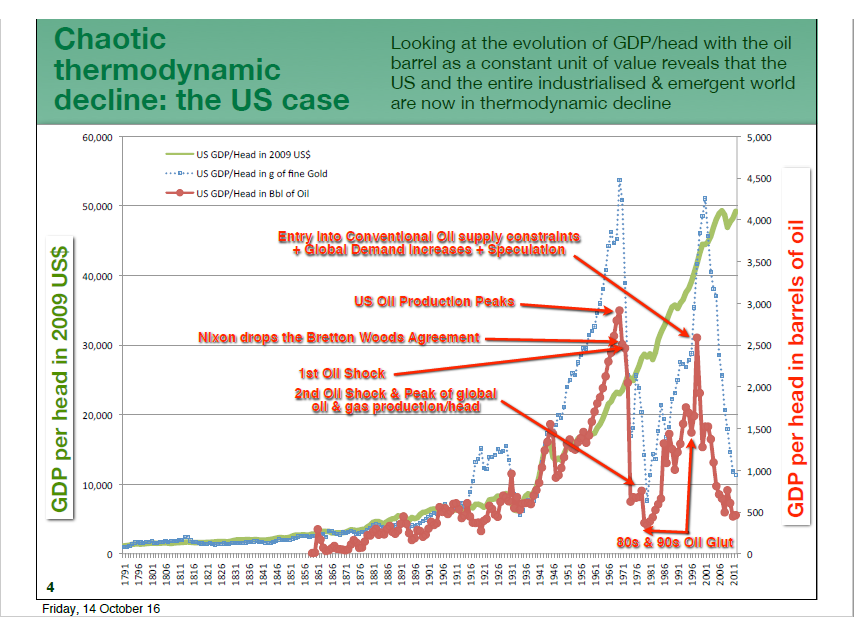 This chart was produced by Louis Arnoux.  I interviewed Louis during our conversation about the Thermodynamic Oil Collapse.  If you haven’t watched that video, I highly recommend it.

I will simplify the chart by saying, for the public to enjoy real wealth creation, all three lines need to move up in the same direction.  You will notice that all three did from 1900 to 1970.  Then all of a sudden gold and oil shot up in the 1960’s and crashed in the 1970’s.  The same thing took place in gold and oil in the late 1990’s and then crashed in 2011.

However, as the gold and oil trend lines reacted violently up and down twice, the GDP continued to move higher without a care in the world.  The REAL U.S. GDP should have followed along with the GOLD & OIL trend lines.  Furthermore, the U.S. GDP per head should have collapsed with oil and gold, but didn’t.

Thus, this is the SETUP for the GREATEST FINANCIAL ENEMA in history.  For those who continue to follow the markets via CNBC or Fox business, your brain is turning into mush.  I am sorry to be so blunt, but there it is.  The folks talking out of both sides of their mouths on these financial networks do not have your best interest at hand.  So, when the LEAD SLUG CHIPS start to lose some serious value in the future, you should not be surprised.

However, if you thought the crying and belly-aching that took place by many of the public after Trump was elected, you AIN’T SEEN NOTHING YET.

I have updated three charts below to show how the huge disconnect continues to take place in REAL vs FAKE ASSETS. 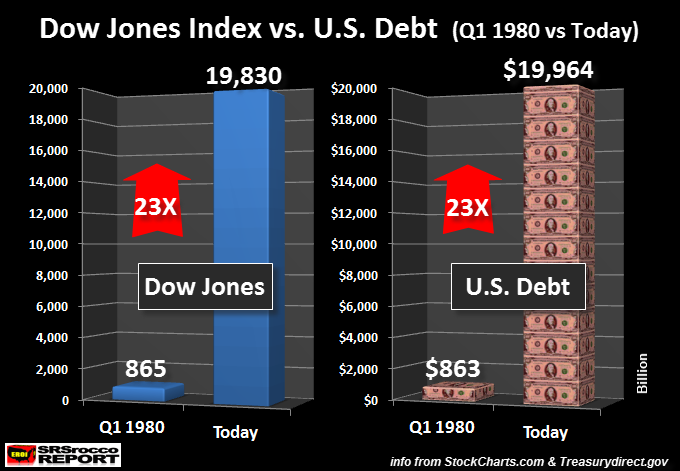 Of course, this is just a mere coincidence….

In addition the S & P 500 is up 21 times since 1980 and the U.S. Retirement Market has been inflated by a staggering 24 times in the same time period.

So, what isn’t doing as well as these wonderful bull market stock indexes?  You got it, GOLD & SILVER.

The price of gold has only doubled since 1980: 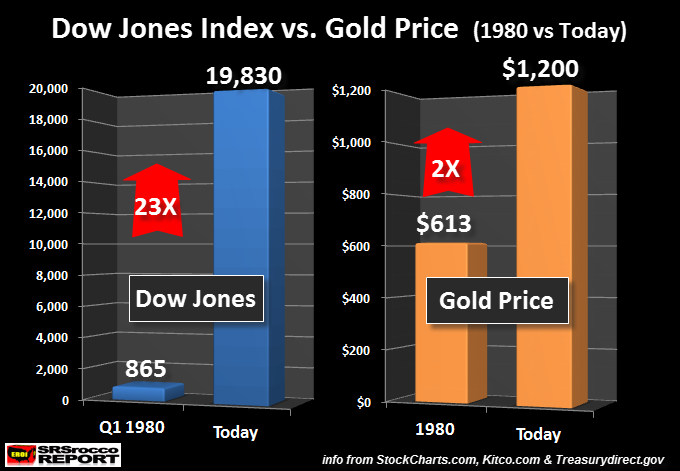 And then we have an even worse performer, the SILVER PRICE; 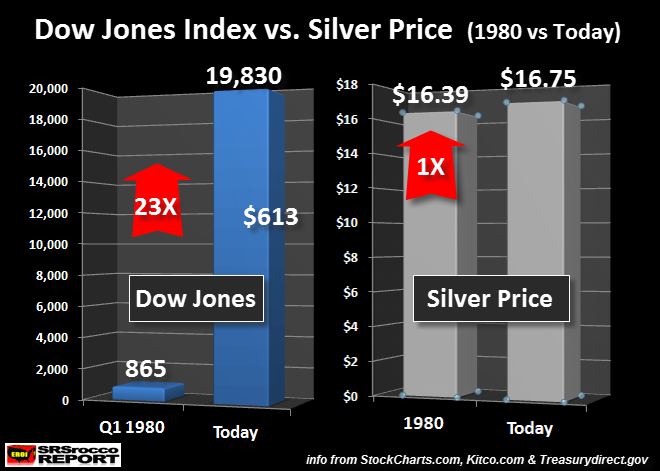 While the Dow Jones Index surged 23 times since 1980, gold has only doubled and silver is basically the same.

Of course… some will say, “HEY STEVE!!, you’re cherry picking the best years for gold and silver and trying to compare them to the stock market.  That just isn’t fair.”  Okay, that is a good point.  Something I have heard dozens of times.  But, the huge move up in gold and silver in the 1970’s was REAL MONEY trying to reset itself back into the market.

However, Fed Chairman Volcker and the “Financial Doctors” at the CME Group initiated the Silver & Gold Coup in 1979-1980, which allowed the GREATEST FINANCIAL PONZI SCHEME to continue for another 36 years.

In order for the “Financial Doctors” to be able to control gold and silver, they had to make sure the public didn’t get too interested in these “Barbarous relics”.  Thus, the U.S. and British Govt started the Gold & Silver Futures Markets.  Their plan was to make sure POOR UNWORTHY SLOBS did not put their Dollars in physical gold or silver, but rather in the paper futures market.

This was released by Wikileaks and published on GATA’s website via TFMetalsReport.com on January 4th.  Here are two of the most important sections of that official 1974 cable:

The U.S. gold futures market was created in December 1974 as a result of collusion between the U.S. government and gold dealers in London to facilitate volatility in gold prices and thereby discourage gold ownership by U.S. citizens, according to a State Department cable written that month, obtained by Wikileaks

“The major impact of private U.S. ownership, according to the dealers’ expectations, will be the formation of a sizable gold futures market. Each of the dealers expressed the belief that the futures market would be of significant proportion and physical trading would be miniscule by comparison. Also expressed was the expectation that large-volume futures dealing would create a highly volatile market. In turn, the volatile price movements would diminish the initial demand for physical holding and most likely negate long-term hoarding by U.S. citizens.”

Basically, the “Financial Doctors” realized that they could funnel a great of gold and silver demand into a paper market rather than into physical bullion.  Craig at TFMetalsReport.com has stated this many times on his site.  When the volume of gold demand on the futures markets increases tremendously, the bullion banks just add more contracts.  They don’t care how many POOR UNWORTHY SLOBS want to buy paper gold, they can issue as many new contracts as necessary.

This is the same with silver.  The genius behind the creation of the Gold & Silver Futures markets is that it provided a mechanism to funnel more money into the GREATEST PONZI SCHEME in history and away from 2,000+ years of REAL MONEY.

And yes, this stunt has worked extremely well.  Try to talk one of your family members, friends or associates into buying physical gold or silver.  After several attempts, you will realize the brainwashing has been a complete success.  I always find it simply amazing when those who have been BAMBOOZLED, actually defend those who do not have their best interest at hand.

I hope those who read the SRSrocco Report are more wise than those who look at gold and silver more superficially.  Buying and holding physical gold and silver is probably the best protection when the FAN finally hits the SEWAGE PLANT.  While some may sell some of their precious metals holdings to trade like the professionals (or so they try), it is extremely wise to hold onto most of one’s physical gold and silver when the Fed and Central Banks no longer are able to suck anymore blood out of the patient.

As stated in several articles, ENERGY is the key to understanding when things really fall apart.  The SRSrocco Report site will continue to publish information that will detail the changing energy dynamic.

To give you an idea just how screwed up the U.S. financial system is versus energy, I suggest taking a look at the article, The U.S. Empire Would Have Collapsed Decades Ago If It Didn’t Abandon The Gold Standard.