Back in 1987, legendary investor Paul Tudor Jones tried to warn stock-market traders that the current prices were unsustainable. By the end of the year, the market was crashing at an alarming rate. Today, Jones is trying to warn investors about a different but equally compelling threat.

The Tudor Investment Corp. founder revealed that his fund is buying “a low single-digit” amount of Bitcoin futures. This move, while not a direct investment in Bitcoin, could lend credibility to the world’s oldest cryptocurrency among older investors who respect Mr. Jones.

Let’s not gloss over the fact that Jones didn’t take a massive position in Bitcoin futures. I personally have never recommended betting the house on cryptocurrency or its derivatives. We can keep our position sizes reasonable even if we believe that a particular asset class has a stellar future.

Jones, known for his sensible approach to investing, advised, “I am not a hard-money nor a crypto nut.” He also provided a concise explanation for his pivot towards Bitcoin ownership, saying, “The most compelling argument for owning Bitcoin is the coming digitization of currency everywhere, accelerated by Covid-19.”

Of course, “currency everywhere” started long before the spread of the coronavirus. The Federal Reserve’s repo operations and QE 1 through 4 ushered in money-printing operations whose consequences will be borne by generations yet to come.

In 2020, the Fed’s balance sheet will include not only the usual mountain of government bonds, but also corporate bonds and even junk-bond ETF’s. As I’ve described in detail here at Crush the Street, it’s an unprecedented and supremely risky move for the nation’s central bank to buy these types of assets. 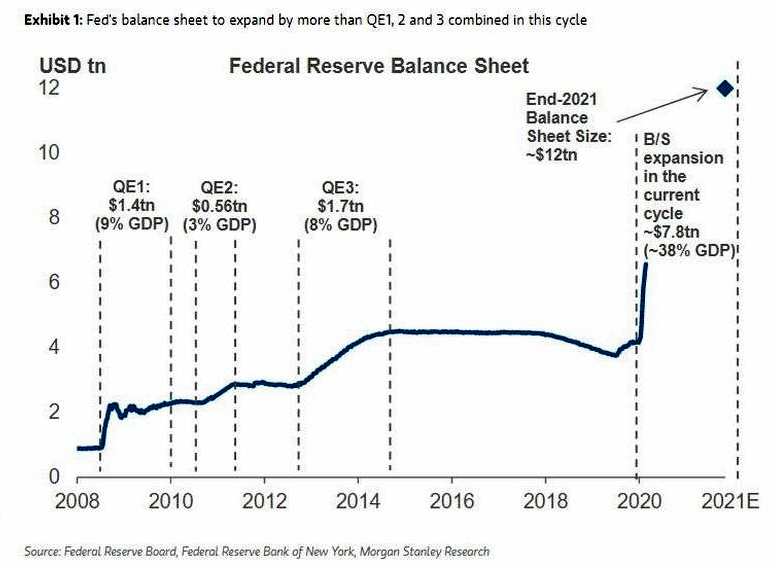 With the coronavirus not within the Fed’s control, they’ll continue to do what they do best: shore up the equities markets for as long as they can by flooding the banking system with fiat money. Consequences are now of secondary importance as central-bank intervention has become a critical lifeline for the American economy.

In response to this, Paul Tudor Jones questions whether interest-rate normalization will be feasible after the coronavirus crisis eventually subsides. Given how low-rate-dependent the big banks and the stock market have become, bond yields above zero might become unthinkable.

As Jones put it, “How reasonable is it to expect that in the recovery phase the Fed will be able to deliver an increase in interest rates of a magnitude sufficient to suck back the money it so easily printed during the downswing?”

In other words, don’t count on the Federal Reserve bringing interest rates back to normal because the world will never return to what used to be normal. Instead, count on the Fed to revert to old habits whenever it’s under pressure: give banks and corporations what they want, which is more money, more often.

Mr. Jones is betting on the Fed continuing to behave this way, and that’s certainly a safe bet. It makes sense, then, that he’s using Bitcoin (or derivatives thereof) to express his bearish thesis on the dollar. Even if the world continues to demand dollars, the government’s printing presses will effortlessly meet the demand.

Interestingly, Jones likens Bitcoin to another dollar-devaluation hedge. “Bitcoin reminds me of gold when I first got into the business in 1976,” he commented. That seemingly offhand remark actually suggests a very bullish outlook on Bitcoin, however, as the gold price has increased by many multiples since the mid-1970’s.

It’s also worth noting that Jones said he’s still a fan of gold and furthermore, he predicted that gold could rally to $2,400 and possibly even to $6,700 “if we went back to the 1980 extremes.” The implication is that the hyperinflationary conditions of 1980 could, indeed, return to America at some point in the future.

The hyperinflation scenario isn’t far-fetched given the Fed’s fiat-printing proclivities as illustrated in this article’s two charts. And gold remains a terrific hedge against government and central-bank lunacy – or as Kyle Bass once put it, “Buying gold is just buying a put against the idiocy of the political cycle. It’s that simple.”

Whether you use cryptocurrency, precious metals, or something else to hedge against ill-considered policies, just don’t get too attached to your government-controlled cash. The same state that bestowed value upon that fiat money can just as easily take that value away – and they’re doing it right now, faster than ever before.