Hell to Pay: The Return to Sound Money Will Demolish the Unprepared

The inevitable global monetary reset is, in many respects, a godsend. It’s a necessary starting from scratch in a world where debt spending is commonplace and taxpayer money bails out globalist criminals. But don’t misunderstand: the restoration of sanity will entail suffering, and the pain won’t be apportioned in equal measure.

Sadly, it’s the hardworking middle class, the economic backbone of society, that will bear the brunt of the cataclysm. There will be great anguish and little justice as the policymakers who spent others’ money recklessly will be given a massive golden parachute: no jail time, no fines, and no accountability.

I wish I could forecast a satisfying cinematic ending to the story, but I refuse to sugarcoat the path that this will take. The illusion of justice persists in our society as the media throws Eric Snowden to the wolves but lets Federal Reserve fraudsters and corporate shysters off the hook completely.

If a low-level criminal commits theft, he’ll face legal consequences; yet, grant-scale larceny goes unchecked and it passes as “policy.” This is what it looks like, by the numbers: 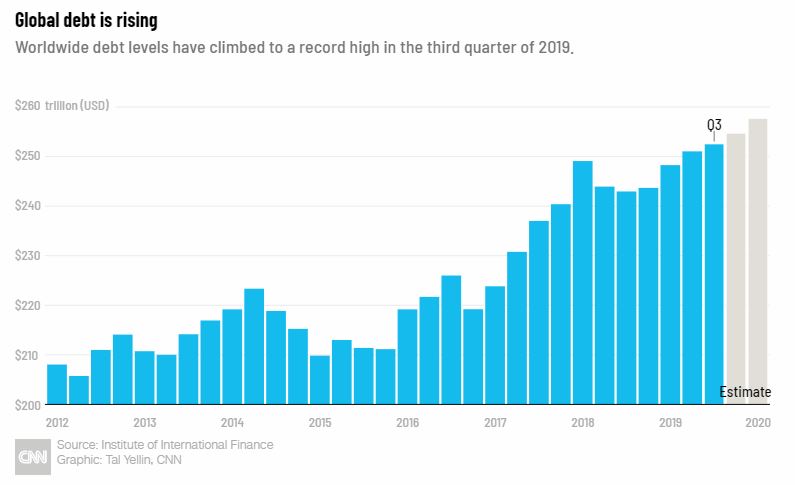 And according to the Institute of International Finance, we shouldn’t expect the situation to improve anytime soon: “Spurred by low interest rates and loose financial conditions, we estimate that total global debt will exceed $257 trillion” during 2020’s first quarter.

I would assert that they’re being generous in calling interest rates “low” and financial conditions “loose.” The world’s central banks have robbed retirees of inflation-beating government bond yields, a mainstay of conservative investing that once returned a safe 5% annually but now yield 1.8% for a 10-year Treasury bond while the U.S. inflation rate is 2.1%.

The Federal Reserve signaled that it’s going to allow inflation to “run hot” and “play catch-up,” and its most recent dot plot indicated no interest-rate hikes for at least the next year. Therefore, we can expect our government money to have less purchasing power, bonds will continue to pay very little, and giant banks will remain encouraged and empowered to borrow recklessly since the borrowing costs are so low.

This, naturally, is unsustainable over the long term but like frogs in a pot of boiling water, we won’t know we’re being cooked until it’s too late to save ourselves. Charles Schwab Chief Investment Strategist Liz Ann Sonders suggests that “The effect may be a subtle crisis over time,” though I personally don’t think it will be subtle once the repercussions really start to kick in.

The greatest irony, though, is that the Fed itself is directly telling us that things are going to get desperate. Indeed, Federal Reserve Chairman Jerome Powell admitted last year that “the federal budget is on an unsustainable path” which could “restrain fiscal policymakers’ willingness or ability to support economic activity during a downturn.”

Did you catch that? The Fed Chair openly conceded that not only would the central bank be unable to help the economy during a crisis – they’d also be unwilling to help. What’s worse: a government that can’t help its citizens, or one that refuses to? In this case, it appears that we have both.

The nation and the world are awash in government-perpetuated debt, but don’t expect justice to prevail when the great reckoning finally happens. Career politicians will bail themselves out first, and then they’ll blame everyone but themselves for the problems they created. At least we might get a return to something resembling sound money policy – a consolation only to the prepared as structures collapse and history, dramatically and problematically, repeats itself.