If you add up the market capitalizations of just four stocks — Google (Alphabet), Apple, Microsoft, and Amazon — their combined market caps exceed $5 trillion.

Add Facebook to this list and you get the top 5 biggest firms by market valuation, which compose an outstanding 18% of the S&P 500. Put differently, the market cap of a full 282 companies in the S&P 500 now equals the same as the top 5 behemoths. This is according to Michael Pento of Pento Portfolio Strategies.

When you have an endless supply of money coming from central banks and chasing finite amounts of stock, there is irrational behavior that can take place in the markets.

Tesla is another prime example of extreme irrationality. We’re talking about a company with a NEGATIVE earnings per share that doesn’t even turn a profit but is experiencing Bitcoin-like moves in the market. 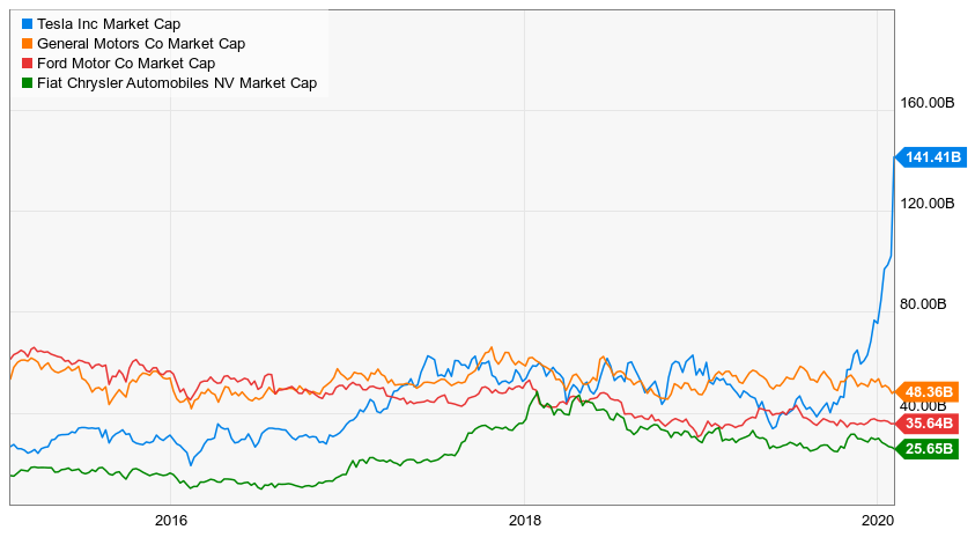 Tesla has only been around since 2003 and has a bigger market cap than Ford, General Motors, and Fiat Chrysler combined.

There’s a big problem that we all need to acknowledge: it’s getting really “easy” for that average investor to throw darts at the stock market and make money. This is symbolic of a manic phase that has me very concerned in the short- to medium-term when it comes to just mainstream investing.

When it comes to undiscovered companies, Google, Apple, Microsoft, Amazon, Facebook, and Tesla are certainly NOT names that come to mind.

Health developments are going to be a parabolic uptrend for the foreseeable future.

Ten years ago, for the first time in the U.S., sales of sliced wheat bread outsold sliced white bread, which ultimately contributed to the bankruptcy of the household name of Wonder Bread most of us grew up on according to the Christian Science Monitor.

Long gone are the days where Coca-Cola is drunk without hesitation from large portions of populations with those same people rejecting fast food, like McDonald’s, as an acceptable meal to feed their children.

A company I want to reintroduce to my readers is Koios Beverage Corp. (OTC: KBEVF & CSE: KBEV).

These are FUNCTIONAL beverages, which are the future. They are full of formulated ingredients that target mental and physical excellence.

Koios is near an all-time low when it comes to where its market cap is currently trading.

At a roughly CAD$10 million market cap, Koios is selling its products in 1,100 Walmarts and another 2,400 GNC stores.

Just to point out how radical health trends are transforming environments, according to the Balance Small Business, Walmart is among the largest retailers of organic foods in America.

I believe this story to be early-stage, which is why it has become a focal point for me this year.

When it comes to most assets in the 2020 market, valuations are at extremes now. Blind investing is a setup for an unsuspecting slaughter.

Early-stage companies in the hypergrowth phase will be the ones that will have the chance to defy macro trends in the equity markets.

Look for my write-up tomorrow, which will go deeper into the opportunity I see in Koios Beverage Corp. (OTC: KBEVF & CSE: KBEV).

Disclosure/Disclaimer:
We are not brokers, investment or financial advisers, and you should not rely on the information herein as investment advice. If you are seeking personal investment advice, please contact a qualified and registered broker, investment adviser or financial adviser. You should not make any investment decisions based on our communications. Our stock profiles are intended to highlight certain companies for YOUR further investigation; they are NOT recommendations. The securities issued by the companies we profile should be considered high risk and, if you do invest, you may lose your entire investment. Please do your own research before investing, including reading the companies’ SEC filings, press releases, and risk disclosures. Information contained in this profile was provided by the company, extracted from SEC filings, company websites, and other publicly available sources. We believe the sources and information are accurate and reliable but we cannot guarantee it. You should know that we have been paid two hundred and fifty thousand dollars by Koios Beverage Corp. (KBEVF) as consideration for a thirty-day digital marketing campaign, which includes this communication.  While we do not expect to buy or sell shares of KBEVF during this marketing campaign, we may do so once it ends. In the past, KBEVF has compensated us (and/or our affiliated companies Future Money Trends LLC and Gold Standard Media) a total of two hundred and fifty thousand dollars (twenty nineteen) and three hundred and forty two thousand dollars (twenty eighteen) for prior, now concluded, marketing campaigns. We also currently own nine hundred and ninety thousand, five hundred and sixty six warrants of KBEVF with a conversion price of thirty five canadian cents, which we received from KBEVF in connection with our prior work.