I grew up in the U.S. with a comparatively stable and normal economic upbringing. I can’t say I had a whole lot of personal reasons to distrust the government and a fiat currency system based on any sort of massive derailment of what I knew as normal.

But just one generation in front of me, massive distrust and personal hell riddled the livelihood of my mother who was born and raised in Argentina, a country that has experienced hyperinflation multiple times, along with banking controls and capital controls that robbed its citizens of their hard work.

Until the day he died, my grandfather kept cash stuffed underneath his mattress and never trusted the system when it came to years of savings that encapsulated the blood, sweat, and tears of years in the workforce. Now, it’s easy for Americans and those in Westernized countries to get so complacent that they let their guards down for too long to only be massively disappointed by the very country they thought was bulletproof.

But the fact is that too much success sometimes creates complacency, and we’ve seen very strong nations fall into traps that get them ensnared.

Take Venezuela, for example. It’s easy for many to write off Venezuela as some banana republic, but I will remind my readers that they were the richest nation in South America and the people there were experiencing some of the world’s highest standards of living at one point. It was after extreme socialism that the country ran into devastating financial ruin.

According to the International Monetary Fund, it has the world’s worst economic growth, worst inflation, and 9th-worst unemployment rate right now. And if that wasn’t enough to brag about, it also has the second-worst murder rate and an infant mortality rate that’s gotten 100 times worse over the past four years. And as for the bolivar, going by black market rates, this fiat has lost 99% of its value since the start of 2012. It’s what you call a complete social and economic collapse. And it has happened despite the fact that Venezuela has the world’s largest oil reserves.

If you don’t think inflation is something to concern yourself with, I implore you to consider the facts…

The World Has its Blinders On

The modern plague is inflation, the deteriorating force that devalues world currencies and creates a ceiling on the prospects of prosperity for the middle class. Even while wages remain stagnant in the so-called American and global “recovery” from the Great Recession, the price of just about everything has gone up, thus diminishing our purchasing power and making it harder for the average Joe and Jane to make ends meet.

The fact is that cash simply doesn’t deserve its reputation as a “safe” asset class. The global inflation rate, which seemed to have leveled off a few years ago, has picked up in recent years and shows no sign of reversing course:

We can try to blame a few “unstable” nations for the global inflation crisis, but there’s no point in playing the blame game when it’s a problem that can quickly and easily metastasize throughout entire continents: when currency crises become your neighbor’s problem, they also become your problem.

For the past several years, the American middle class has been under tremendous pressure, caught between steadily rising inflation and weak wage growth; paychecks, and the families that depend on them, are increasingly being squeezed: 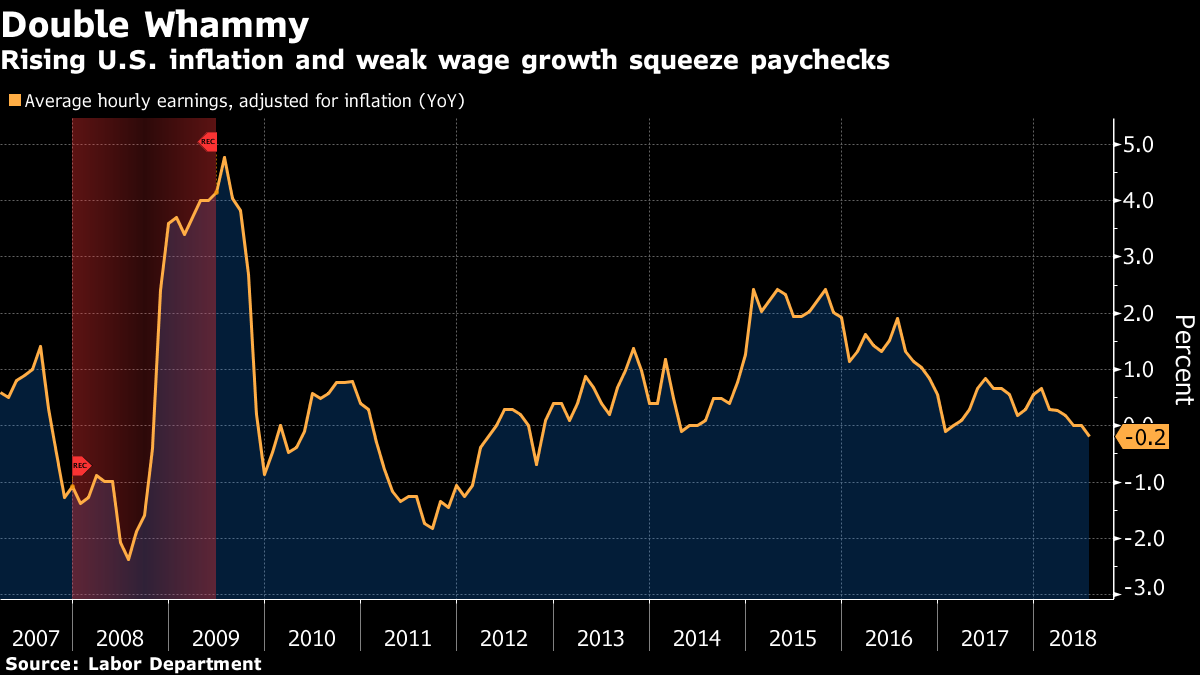 Unfortunately, inflation tends to hit the American middle class where they feel it the most: not in luxury purchases, but in necessities, like rent and gasoline.

Sadly, the Federal Reserve’s inflation “goals” don’t comport with the real-life needs of hardworking American citizens. In what is often referred to as the richest nation in the world, the currency has lost any semblance of trust as a lasting store of value; all signs point to the inevitable zero as the U.S. dollar is completely being hollowed out:

With world powers like China, Russia, and India dumping billions of U.S. dollars, it’s not unfair to say that “King Dollar” will lose its status as the world’s reserve currency in due time. For that reason, holding excessive amounts of cash for long stretches of time is not a recommended wealth building strategy, especially if that cash is in U.S. dollars.

True wealth building comes from allocations into a variety of asset classes that will appreciate in value, not deteriorate. With so many of the world’s fiat currencies spiraling into hyperinflation, your best strategy is to be positioned for the continued devaluation of these currencies; prepare now or deal with the implications very soon.

This is a newsletter that was founded on the ideas of opting out of conventional wisdom. Conventional thinkers consider gold as an antiquated relic. But consider the fact that gold has an unprecedented history of retaining purchasing power for thousands of years. This is metal that is bound by chemical and physical law and has had thousands of years for price discovery to settle.

This is the very reason I personally keep 10% of my wealth in physical metal: it’s the only wealth storage vehicle I can buy with the highest degree of confidence of knowing that my purchasing power over the course of decades will be persevered despite what governments will inevitably do.

Fiat currencies have all ultimately failed since the beginning of time, and this time isn’t any different than the rest.

Having said that, I believe 2019 is setting up to be a spectacular year for gold… Look for my next email where I will highlight 3 major trends happening in 2019 that I will be personally positioning in. My goal is to close out 2018 with a bang and pour fire on what we are doing diving right into 2019 in a major way.