Investors are faced with a tough decision in today’s strange market environment: hang on in hopes of eking out more gains from overpriced equities, or sit on the sidelines and watch with amazement as the investing community blithely ignores bad news and celebrates government-sponsored deceit.

Damned if you do, damned if you don’t, as they say. Things seemed tougher when markets went both up and down, but in hindsight it was much easier to play bidirectional markets than the current game of kick the can down the road. The combination of $15 trillion of central bank liquidity injections and record quantities of corporate stock share buybacks has kept this grand experiment going, at least for the time being.

Central banks and market bulls have some numbers on their side, if we’re willing to believe them. The U.S. Bureau of Economic Analysis, which touts itself as “your source of accurate and objective data about the nation’s economy” (they put the words “accurate and objective” in bold letters, so therefore it must be 100% true), proudly released their Q1 2019 GDP data:

What a treat: the newest orange rectangle is taller than the previous one, so everybody’s celebrating and the stock market has permission to float upwards for a little while longer. However, let’s take a closer look at the specifics behind the supposed 3.2 percent increase and see if this economic structure has legs.

As the Bureau of Economic Analysis states, “The acceleration in real GDP growth in the first quarter reflected an upturn in state and local government spending, accelerations in private inventory investment and in exports, and a smaller decrease in residential investment.”

So, the number-one driver of U.S. GDP growth acceleration was government spending. Call me old-fashioned, but I tend to equate “government spending” with “wasteful spending” – not something to brag about and certainly not a contributor to American productivity in any real sense.

Lest anyone accuses me of nitpicking (though I’m sure I’m guilty as charged), it’s well worth noting that while government spending (never a sustainable solution to society’s ills) picked up, private-sector economic activity slumped: 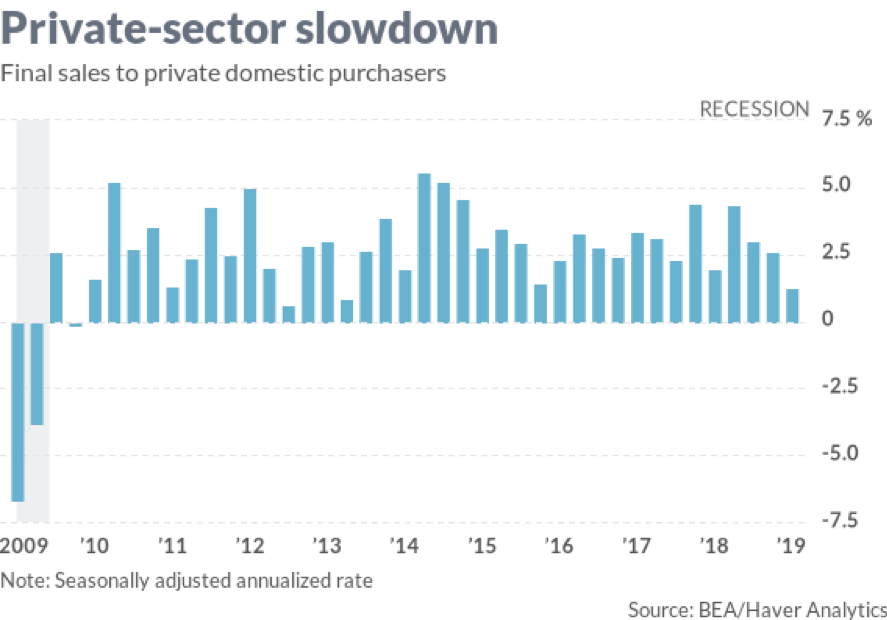 Looking at the chart, we can observe that the quarterly decline was not only quite sharp, but is the third consecutive decline. As the private sector is the backbone of the American economy, I find this chart to be much more telling than the one provided by Uncle Sam.

Evidently, I’m not the only observer with this opinion: Harvard University professor and former presidential economic adviser Jason Furman remarked, “First-quarter GDP is 3.2%, but the underlying data is much weaker and is consistent with a slowing economy.”

For his part, Economic Outlook Group economist Bernard Baumohl borrowed an old automotive analogy but still made his case: “On the outside, it looks like a shiny muscle car. Lift the hood, however, and you see a fragile one cylinder engine.”

Navy Federal Credit Union’s Robert Frick adjusted the government’s number to something more reflective of reality: “the first quarter report was marked by unusual data that inflated it temporarily — mainly short-term boosts from higher inventories and from trade (which added one percentage point alone). If you factor out those one-offs, you get GDP rising at just 1.3%”

And RSM chief economist Joseph Brusuelas affirmed the central bank’s eagerness to cherry-pick statistics and use them as an excuse to perpetuate the market bubble: “Fed policy makers are going to look right past that 3.2% top-line number and focus on composition of growth, which will reaffirm its prudent pause.”

Prudent pause, or pump job? I’ll let you pick sides on this one, but by now I hope you’re at least questioning the veracity of the government-sponsored “research” on how the economy’s faring in America. Be advised, though, that a skeptical mind-set may put you in the minority: more credulous analysts like Jefferies chief financial U.S. economist Ward McCarthy are happy to take the government’s stats at face value and conclude that “the economy is still ploughing ahead.”

McCarthy’s not entirely wrong: the economy is indeed “still ploughing ahead” for America’s financial elite. The Federal Reserve’s easy-money policy has stretched the wealth gap, which has increased consistently since financial disciplinarian Paul Volcker retired as Fed chair: 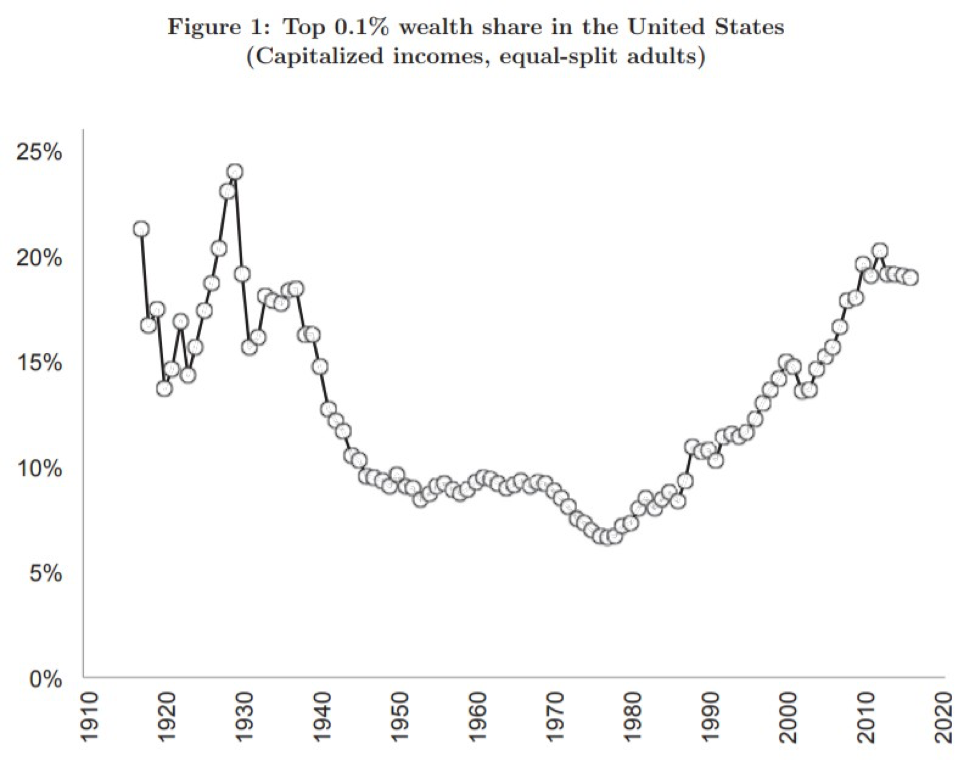 The middle class, naturally, is left to fight over the scraps – it’s business as usual as the numbers get massaged and the narrative gets perpetuated for another year, another cycle, another lifetime.