Living on the Edge: Millions of Americans Are One Paycheck Away from Disaster

One of the persistent and recurring themes at Crush the Street is the importance of saving and investing wisely – choosing tomorrow’s financial security over today’s wasteful spending. The fact is, your job could end tomorrow without warning or you could suddenly have unexpected expenses: this could happen to anyone at any time.

Living “on the edge,” just one paycheck away from financial disaster, is neither glamorous nor sustainable as a lifestyle. Yet, literally millions of Americans are unfortunately in this situation, with the latest data indicating an economic “recovery” that’s more fantasy than reality amid widespread financial uncertainty on Main Street.

In what’s commonly considered the wealthiest nation in the world, missing just a couple of paychecks would be disastrous for nearly half of the America’s workforce. Shockingly, a new study from NORC at the University of Chicago (based on a survey of more than 1,000 adults) has determined that 51% of working adults in the U.S. would need to dip into their savings to cover necessities if they miss more than one paycheck.

The outlook is especially bleak for households earning less than $30,000 annually, two-thirds of which wouldn’t be able to cover basic living expenses after missing more than one paycheck. Moreover, the report notes, “notable differences remain across race, ethnicity, education groups, and locations and many individuals still struggle to repay college loans, handle small emergency expenses, and manage retirement savings.”

It’s a sobering look at a nation whose families struggle to make ends meet even while the government touts a 3.6 percent unemployment rate (the lowest in nearly 50 years) and 3.2 percent GDP growth:

These numbers look great on the surface, but they hide stark economic realities in America: stubbornly stagnant wage growth, full-time jobs lost to outsourcing and automation, and a frightened populace in which “short disruptions in pay can cause significant hardship as most Americans appear to be living paycheck-to-paycheck,” according to Angela Fontes, director of the Behavioral and Economic Analysis and Decision-Making program at NORC at the University of Chicago.

Data from other sources only serve to corroborate this precarious outlook, with Washington, D.C.-based think tank Prosperity Now reporting that 40 percent of American households lack a basic level of savings (i.e., enough savings to live at the poverty level for three months if their income was interrupted).

Prosperity Now’s report concludes, “too many families are either struggling to make ends meet, or are just one emergency away from a financial disaster”; this is confirmed by HomeServe USA, who found that nearly 1 in 5 Americans (19 percent) reported having no money set aside for dealing with the costs of an unexpected emergency expense, and that 31 percent of Americans don’t have at least $500 set aside to cover an unexpected expense. 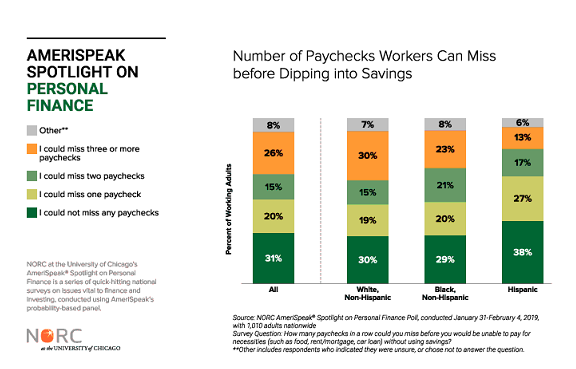 Courtesy: NORC at the University of Chicago

Even the Federal Reserve – the same one that continually paints a rosy picture of the American economy – has admitted that roughly 4 in 10 Americans (41 percent, to be exact) couldn’t afford a $400 emergency. Moreover, it has been determined that approximately 22 percent say that they expect to forgo payments on at least some of their bills.

And when Americans miss payments on bills, it’s a vicious cycle that only digs a deeper financial hole. Nearly half of households (47 percent), when in debt, reported that they will turn to credit cards to cover the financial gap; credit cards are notorious for carrying high interest rates and assessing hefty late payment fees, thus sinking borrowers further into the debt cycle.

Moreover, the Federal Reserve Bank of St. Louis has reported that the savings rate in America fell from its recent high of 12 percent in December of 2012 to just 6.5 percent in March of this year. For a basis of comparison, back in May of 1975 the savings rate was 17.5 percent – and that was during a sustained economic slowdown.

If you’re counting on the government to save us from America’s hidden financial ills, think again. George S. Clason’s classic book The Richest Man in Babylon says that you should save at least 10 percent of your income, and this advice is as timely as ever: if we’re going to save America, we first need to save our money, and thereby save ourselves.