***It was earlier this year when I alerted all of my readers about the early opportunity in Sandspring Resources. The company has just rolled back its shares one for eight and has officially changed its name to Gold X Mining Corp. The Canadian ticker is now (TSX-V: GLDX) and the U.S. symbol is (OTC: SSPXD). Just know that this sometimes take a couple days to square up in all brokerage accounts, so don’t be alarmed if you see the chips settling in your individual accounts.

As you all know, Gold X is sitting on more than 10 million ounces of gold in a favorable jurisdiction.

None other than the one and only Paul Matysek has been added to the advisory board, a man who was integral in the development and sale of five different companies since 2004 that were worth over $2 billion combined. He has identified gold in this specific bull market, and the 10-million-ounce resource that Gold X Mining has in Guyana got his attention.

This isn’t some farfetched pipe dream – it is happening, which is why I’ve highlighted this company to my readers as a high-priority gold pick for 2019.
I will keep everyone posted on further developments.***

They say money is the root of all evil, but they forget it’s the owner of the money that ultimately dictates what it’s used for. Money isn’t “bad” and shouldn’t control us, but should rather be used to enhance our lives and the lives around us.

Consider Bill Gates, founder of Microsoft and at the time, the youngest self-made billionaire, and someone who held the title of richest man on Earth for a number of years, has enhanced the lives of nearly everyone in the world. From more efficient lives to breakthroughs in I.T. that have helped save millions of lives in the medical industry and the wealth that has been created through jobs and investments, the capitalism that is encouraged in the free market has been responsible for more charity than any other charitable organization could ever come close to.

Once people start to have a proper understanding of how the system works, you can create a positive relationship with your wealth and the economic system we have all grown up in.

The mindset of the wealthy is not to view money as an obstacle, but as a resource. Resources are used to grow, acquire, and sometimes pay for themselves.

On the other side, the majority of the workforce exchange their time for money and ultimately fall victim to inflation, after which they’re pressured to work more for something that’s worth less to maintain basic living standards.

This is why the wealthy build companies and buy investments and why businesses invest so rigorously into creating solutions around infrastructure technologies such as A.I., the Internet of Things, and blockchain that are reshaping our workforce: the rich create the infrastructure (work hard once) and then generate sales with little effort and time (income for a lifetime, smart work), then compound and repeat!

Taking Action With Ideas the Mainstream Media Won’t Tell You

4 Ways to Protect and Compound Your Wealth

Tap into what the rich are doing because it’s not just for elites; in fact, anyone can implement this mindset and strategy into their finances today, maintaining living standards and purchasing power by making money work hard.

Strategically acquiring property can increase the success and growth of your real estate portfolio. Not all real estate is created equal. Consider the demographics of the area and the average income of the surrounding population. For example, if there is a large concentration of universities in the surrounding area, students and professionals would be an ideal target market for tenants.

An important thing to note about monetizing your property is the independence it gives you as an investor. Buying property in the hopes it will be worth more in the future can work, but it isn’t a guarantee. Turning it into a cash-flowing asset reduces risk and makes your portfolio more robust.

Savings accounts are often creating a delusion of wealth. It’s always good to hold some cash, BUT keeping your life’s savings sitting in one place may hinder your target retirement date. Fiat in your typical bank account is literally decaying from QE-driven inflation. By not making your savings work for you, you are committing financial suicide!

Lending platforms such as PeerStreet.com and Fundrise.com keep your savings ahead of inflation with yields ranging from 4-10% annually. As you earn interest and keep reinvesting, you are passively increasing your exposure to potential returns without risking your own capital in the process.

Purchasing shares of longstanding companies is a staple for most investment portfolios. Investors should make moves into companies for the long-term. And for this, it’s important to be robust and monetize your investments by considering companies that pay shareholders a dividend.

Dividend stocks and high yields give investors the ability to cashflow their portfolios, which would otherwise be exposed to market valuation and inflation. Companies like Anheuser-Busch InBev protect your capital against inflation, which currently stands at around 2.0%.

Manipulation in precious metals is obvious and shows no signs of stopping, but history has always shown that holders of gold and silver usually end up better off as the decades pass.

Holding precious metals during the last century would have protected your family’s wealth against a 90% drop in purchasing power. Despite this obvious realization, many ignore gold and its proven track record. 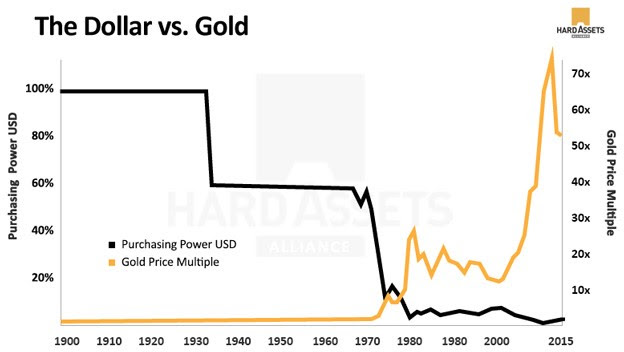 Despite the drawn-out bear market in precious metals, charts do not lie, and allocating a piece of your portfolio to gold and silver could benefit you and your family in economic and geopolitical uncertainty at a later date. Being prepared is better than being caught off-guard!

And if my readers would like to take an over and beyond position in the gold space, consider the junior mining sector.

There are lots of great things going for Gold X Mining, and as I started this email, I would strongly recommend my readers consider shares in this company.

No matter how good an investment sounds, and no matter who is selling it, make sure you’re dealing with a registered investment professional. Use the free, simple search at investor.gov

Never base any decision off of our advertorials. Crush The Street stock profiles are intended to be stock ideas, NOT recommendations. The ideas we present are high risk and you can lose your entire investment, we are not stock pickers, market timers, investment advisers, and you should not base any investment decision off our website, emails, videos, or anything we publish.  Please do your own research before investing. It is crucial that you at least look at current SEC filings and read the latest press releases. Information contained in this profile was extracted from current documents filed with the SEC, the company web site and other publicly available sources deemed reliable. Never base any investment decision from information contained in our website or emails or any or our publications. Our report is not intended to be, nor should it be construed as an offer to buy or sell, or a solicitation of an offer to buy or sell securities, or as a recommendation to purchase anything. This publication may provide the addresses or contain hyperlinks to websites; we disclaim any responsibility for the content of any such other websites. We have been compensated by Gold X three hundred thousand dollars for online marketing. We also own shares of Gold X purchased on the open market and their recent private placement. In the future, we may be buying or selling shares without notice. Assume we could be selling shares if you’re seeing this thirty days since its publishing date. Please use our site as a place to get ideas. Enjoy our videos and news analysis, but never make an investment decision off of anything we say. Please review our entire disclaimer at CrushTheStreet.com