May the Blockchain Be With You: Alt Season to Kick Off Bitcoin Boom

With Apple and Google recently reporting earnings, the mainstream media has had a field day reporting on stock market earnings season. But for those of us who like to focus on alternative investments that don’t depend on Federal Reserve prop jobs, there’s another season that’s equally important: alt season.

If you’re not familiar with alt season, you’re not alone: it’s grossly underreported but absolutely worth investigating if you’re interested in Bitcoin and other cryptocurrencies. Put simply, alt season is the part of the cryptocurrency market cycle in which many altcoins increase in value compared to Bitcoin.

Traditional, old-school fund managers and analysts don’t place much emphasis on alt season, but you will see cryptocurrency enthusiasts monitoring alt season on social media – including millennials, who have embraced crypto and blockchain technology faster than other generations.

That actually makes perfect sense, since millennials are first-generation digital natives who grew up with peer-to-peer platforms (BitTorrent, Limewire, etc.) – and also grew up amid the horrors of the financial crisis and lost trust in the government when it bailed out the big banks but not the average worker. 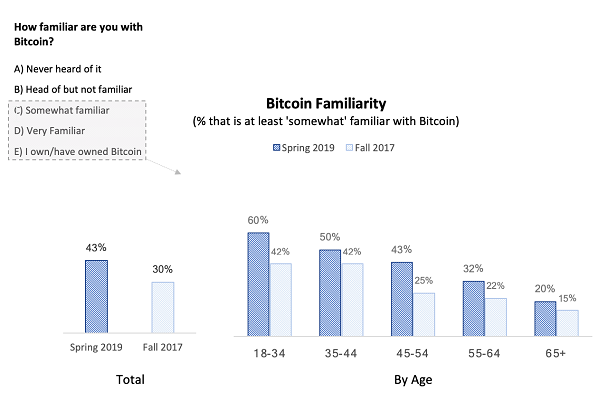 And so, we have a new generation of investors who pay attention to Bitcoin and altcoins, and rotate their investments between the two. They’re also interested in researching cryptocurrency, as Google search requests for Bitcoin have recently tripled.

Fundstrat’s head of research, Thomas Lee, is revered as an expert in the crypto and blockchain space, and Google searches for Bitcoin often end up on his social media accounts. One of his most liked and shared tweets features evidence that alt season might be under way – and the profound implications on Bitcoin’s potential future price action.

In a recent tweet, Lee explains that “since 2015, one of the ‘pre-conditions’ for the start of alt season is a drop in the correlation between alts and Bitcoin.” He continues by observing that “this drop in correlation has started recently” and that “this is a data point to suggest alt season could be under way”: 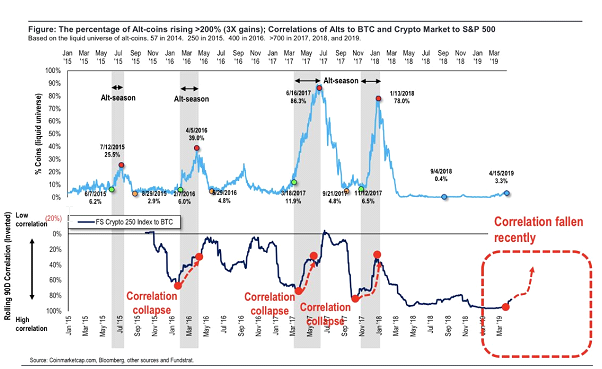 Lee’s chart indicates that a drop in the rolling 90-day correlation between the two subsets has preceded three alt seasons: March 2016, early 2017, and late 2017/early 2018. Lee and Fundstrat specifically define an alt season as when a large percentage of alt coins rally by over 200 percent in a short period of time.

In a tweet that continues this line of reasoning, Lee explains the likely result of the start of a new alt season: “Past alt-seasons averaged 1,100% gains”: 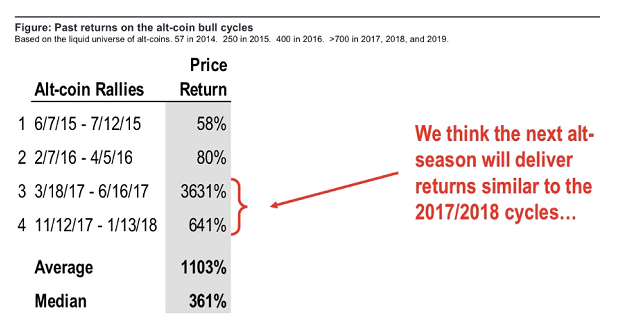 As you can see from Lee’s graphic above, he believes that the next alt season’s returns will deliver huge returns like we’ve witnessed in previous alt seasons. It’s worth noting, however, that while the average of the past four rallies is 1,103 percent, the median is “only” 361 percent – still quite impressive by any reasonable measure.

To provide further evidence that the coming alt season will provide returns of that magnitude, Lee cites the massive growth potential for crypto and the blockchain: “Will the next alt season be as strong as the past? Given there are probably only around 50 million active wallets (vs. 5 billion Visa/MasterCard accounts), we think crypto is still early in the adoption curve. So it should be similar.”

If you’re hoping that Lee would suggest loading up on any particular altcoin to ride the upcoming rally, you’ll be disappointed to know that according to Tom Lee and Fundstrat, “we don’t have any formal alt recommendations at the moment.” However, Lee also contends that “anything useful likely survives. That means ETH, BNB, DOGE, and some of those that raised dynastic levels of capital (EOS).”

As for Bitcoin, Lee noted in an interview that Fundstrat’s Bitcoin Misery Index, which measures the average sentiment of cryptocurrency holders, has recently reached a very high reading of 89. This index has never registered values above 67 during a bear market; therefore, it makes sense to conclude that Bitcoin is in the beginning stage of a bull market.

On the technical side of things, Lee observes that the price of Bitcoin has decisively crossed above the key 200-day moving average, a widely accepted bullish indicator: 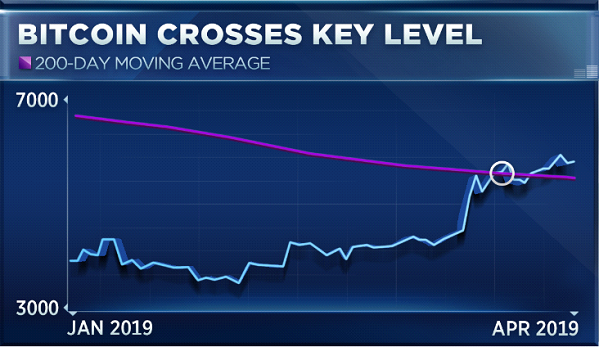 Lee’s conclusion is that the so-called “Crypto Winter” of last year is very likely over and that “Bitcoin can retain its old highs.” By “old highs,” we can assume that Lee means the December 2017 peak, when Bitcoin’s price reached nearly $20,000.

But you don’t have to take Thomas Lee’s word for it – with only 21 million Bitcoins in existence and blockchain adoption rates growing exponentially among businesses and individuals, the evidence is all around us and the best days are, by all indications, just ahead of us.