Betting on the Price of Gold

The Acceleration of Gresham’s Law

The U.S. dollar is a dying asset, and slowly diversifying away from it is the name of the game.

There is certainly a drive to opt out of the fiat paper instability and move into real tangible assets, or even intangible assets, as of lately. Much of the world has been educated on the fiat Ponzi scheme, and I’d say much more than ever before have a mild concern about the stability of the dollar.

I think the worst time for investors to be forced to make a decision is in the middle of a frenzy. Right now, the mainstream is enamored by the stock market frenzy. 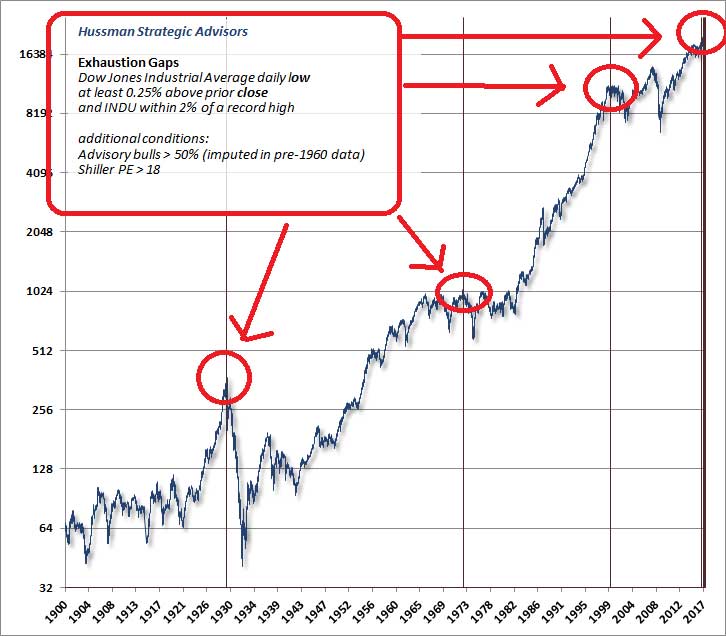 Despite extreme valuations, investors’ fear of missing out is looking increasingly desperate. In market cycles across history, that has been an unfortunate impulse.

Piling into stocks right now because you think they are going higher based on previous performance is not wise, in my opinion.

In fact, I believe that when we see stocks correct, this will trigger investor demand for gold in a big way. At this point, with the way stocks have run, a 10% correction for the Dow is a given, and I believe we could see a correction that takes the Dow Jones as low as 14,000-16,000 points.

There is this push to have gold treated as money, and there are good guys in the government that are arguably acting on behalf of the people, with Ron Paul being at the top of that list.

Gold and silver bullion are now treated as money in Arizona. Gold has always been money, as they were never able to take away its role because it is intrinsic, despite what anyone says. You could even call it an absolute. But after gold was officially disconnected from the dollar, the government was then able to tax capital gains, which is not practical for day-to-day monetary use cases.

Now most people use gold as a wealth storage vehicle and not for micro-transactions, but the principle remains and it discourages gold ownership. All taxes discourage the very thing that they’re being placed on.

So, in case you didn’t hear, Arizona Governor Doug Ducey signed into law a bill that eliminates capital gains taxes on gold and silver, thus allowing Arizona residents to use precious metals as currency instead of Federal Reserve notes.

This is very much a state vs. Federal interest, where the state technically has to operate within a confined budget and the Federal Government can spend into oblivion with their shoulder-to-shoulder relationship with the Federal Reserve. While it may not be in the best interest for the Federal Government to give any sort of respect to the yellow metal, the states might be a little more indifferent and capable of acting in the better interests of the people.

I hope more states catch this because regardless of what states do, fire,real intrinsic value will be reflected in gold.

I fully expect gold to go into a euphoric hype cycle, but the average investor is sitting around on the sidelines brushing off gold because of lack of enthusiasm surrounding the metal.

When gold starts climbing the ladder of the euphoric hype cycle, prices are going to climb and climb and investors are going to be left on the sidelines waiting for corrections that will never come (or at least prices that they will only wish to see again).

Don’t believe me?
Look at Amazon, Google, Apple, Tesla, and, of course, BITCOIN.

Gold is hanging around at the $1,250 mark now in the backgrounds of everyone’s mind. And to be fair, it is quietly climbing higher from its December 2015 low. I fully expect for gold to quietly climb into the $1,300, $1,400, and $1,500s, and then for enthusiasm to really start to kick in. I believe that at these prices, confidence will set in and we could start to have those runaway prices that will leave investors jumping into the party during the exuberant hype cycle. The good news is I believe gold is destined for $5,000-$10,000. The bad news is that it could happen fast.

The expectations for higher prices will drive gold to the moon, and the forecasts will be self-fulfilling in the hype cycle.

Reasons for a Massive Move Into Gold:

The bad money floating around the system in accordance to Gresham’s Law will drive out the good money. Or maybe another way to put it is that the bad money that circulates the system will pile into good money and drive the price higher. Of course, I’m referring to gold.

This really is just phase one of the company. Soon, according to Keith Neumeyer, we will see joint ventures, equity partners, royalties, streaming structures, and even spinouts. All properties contain known mineralization, so these are high-quality assets. FF is also actively pursuing new property acquisitions and company takeovers.

As the Royal Bank of Canada put it, “There is a shortage of near-term production gold projects available for acquisition, especially in geopolitically-safe areas.”

This is why First Mining Finance is a prime future takeover target.

First Mining Finance has a robust gold portfolio of nearly 14 million ounces… But you have to connect the dots to see who would be high on the list to take them over.

This is pure speculation on my part, of course, but look at these two maps of FF’s projects and their proximity to a very specific major mining giant. 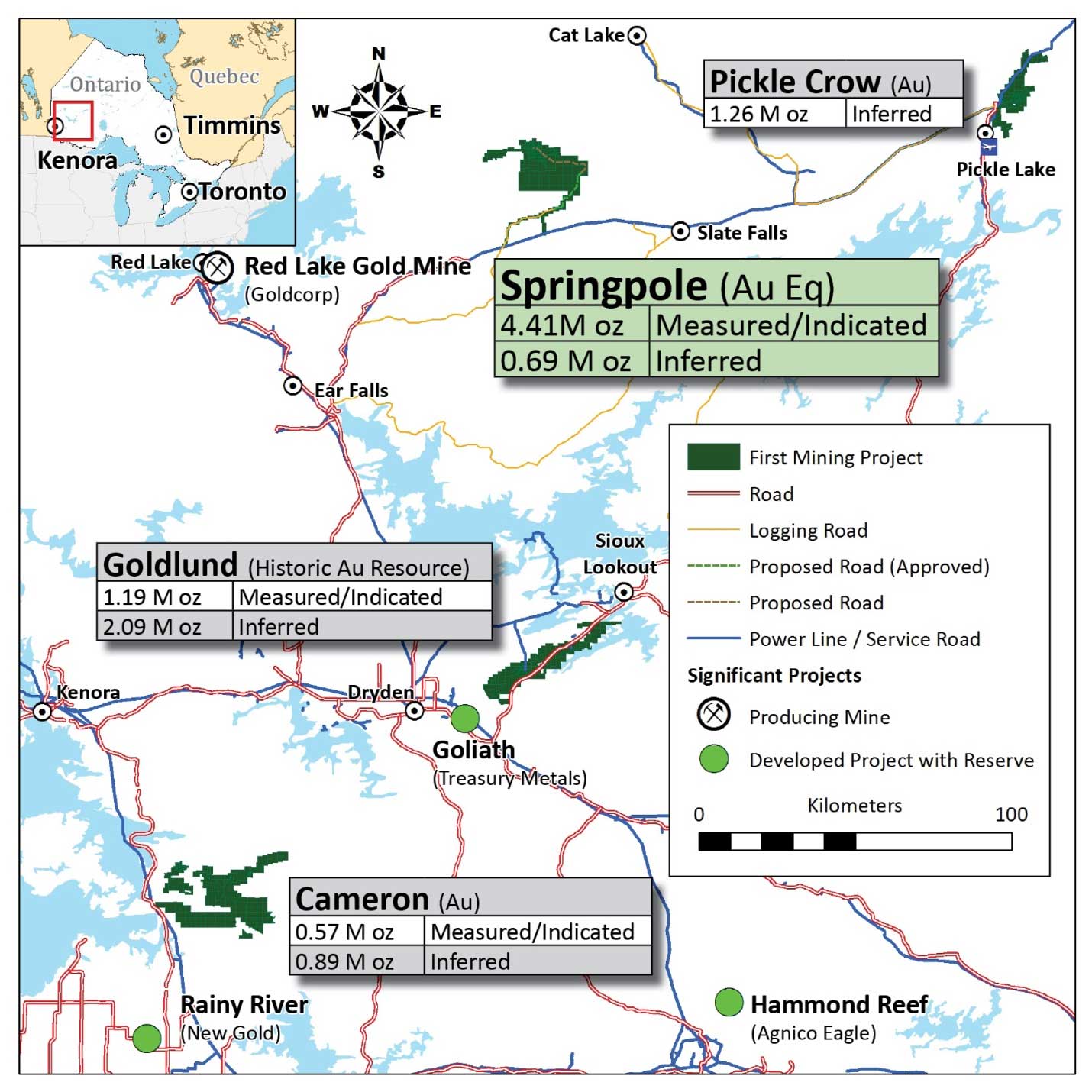 FF’s Springpole project (over 5m oz.) and Pickle Crow mine (1.3m oz.) are practically next door to Goldcorp’s Red Lake mine and Musselwhite mine.

I should note that the Springpole project ranks amongst one of the largest undeveloped gold assets in the world and would be a highly-lucrative asset for any major mining company to own.

In my opinion, given the current gold market and bull run we have in front of us, this single project alone could justify FF’s current market value.

This is a company that is hoarding gold and perfectly positioned to capitalize on gold’s explosive upward price action.

Look at the past year of press releases… honestly, I don’t think any of us have ever seen a small gold stock being so aggressive to deliver real value to shareholders.

Investors that will benefit the most from a rising gold price will be those who have the exposure to millions of ounces of gold through mining shares.