Riots in Our Streets

As I am writing today, I’m once again reminded as I watch the rioting ensue in Baltimore that society is very capable of losing all sense of stability in times of extreme emotion and anger. It does seem that after the Trayvon Martin scandal, any sort of police brutality towards African Americans is turning into an opportunity to burn down the specific metropolitan city the incident took place in, considering how often these riots are taking place now. Without getting too far into my opinion on these issues, I believe police brutality is wrong and I believe acting like an idiot in the street is wrong, too, but it does remind me that we don’t live in a 100% predictable world. Times of peace are what we have come to expect, but won’t necessarily always have.

These racial problems seem to be somewhat isolated in terms of the violence that follows in localized areas, but something that we talk about frequently here at CrushTheStreet.com is the potential of a dollar crisis, which will slam the U.S. across the board and affect every city in the U.S. if it does happen. The threat of a potential dollar crisis could lead to similar types of rioting and chaos in our streets.

Japan’s situation is always a fascination for me because they have a monetary policy that is more expansive than any other country around the world. In theory, we know that the more stimuli get injected, the less of an impact each stimulus will have on the economy. So seeing what happens in Japan is very much a foreshadowing as what might be to come for us here in the states. However, because the U.S. situation is unique, there is no precedence to give us a real idea what we can expect to unravel in a dollar crisis situation. There’s definitely a much closer resemblance that can be made between the U.S. and Japan than trying to compare the U.S. to a third world country in Africa that went through a currency crisis.

What we are seeing right now is Japan hitting the ceiling when it comes to monetary policy effectiveness. (Bloomberg) – Japan’s retail sales fell in March — the most since 1998 — cutting against Central Bank Chief Haruhiko Kuroda’s view that cheaper energy will give a boost to the world’s third-biggest economy.

Sales dropped 9.7 percent from a year earlier, when there was a run-up in purchases ahead of an April sales tax increase, according to trade ministry data released Tuesday. Sales sank 1.9 percent from the previous month, compared with a gain of 0.6 percent forecast by economists in a Bloomberg survey. The weak reading on consumer spending comes ahead of this week’s Bank of Japan policy decision and economic outlook that could highlight waning momentum in inflation. Kuroda has said cheaper oil may crimp price gains in the near term, while eventually fueling growth and inflationary pressures.

“It’s becoming clear that Japan’s recovery is very sluggish,” said Kiichi Murashima, an economist at Citigroup, Inc. “With a tight labor market and better consumer sentiment, we don’t have to change the view that spending will pick up gradually. But uncertainties are growing about the strength of the economy and that’s worrisome for the BOJ.”

Japan has been creating new currency on a scale that, relative to the size of its economy, dwarfs the Fed’s recent QE program. A bunch of its bonds trade with negative interest rates and its government continues to run huge deficits. And despite all this, its people will buy less stuff this year than last, while inflation drifts towards zero. Limits, in short, are starting to appear.

We could definitely see the U.S. go down this route of stimuli of last resorts to jump start what is left of an exhausted economy and it could very much look like what we are continuing to see in Japan. As I mentioned earlier in the piece, uncertain events could most definitely lead to uncertainty in the streets, and I suggest you be prepared for it all.

Riots in our Streets 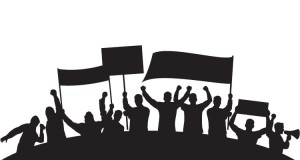 As I am writing today, I’m once again reminded as I watch the rioting ensue in Baltimore that society is very capable of losing all sense of stability in times of extreme emotion and anger.