More Stimulus Checks Are Probably Coming. What Should You Do with the Money?

Although the first round of relief payments to individuals is still a work in progress and not everybody’s received their promised funds yet, the government is now working towards round two. This prompts questions and decisions about how you’ll spend the money if and when you receive it.

This update is subject to change at any moment, but so far he $3 trillion HEROES Act has been passed the U.S. House of Representatives. However, to become a law it would still need to be passed by the Senate and then signed by President Trump.

The President has threatened to veto the HEROES Act, but there have been reports floating around that Trump is warming up to the idea of providing more stimulus funds. Meanwhile, senior White House economic adviser Kevin Hassett recently said that another round of stimulus payments is “pretty likely.”

To this Hassett added, “I think it’s coming sooner rather than later.” No specific timetable was provided, unfortunately. In any case, some folks are undoubtedly fantasizing about how much money will be sent, how soon they’ll get it, and how they’ll spend it.

First and foremost, please do not spend the money before it’s actually approved, distributed, and fully settled in your bank account. The first round of stimulus checks has had more than a few hiccups, and it won’t do you any good to spend money you don’t even have yet.

Given the state of the economy, especially as it pertains to the middle class, an argument could be made that a second round of stimulus is badly needed. Consider, for example, that more than 4 million Americans are currently skipping their mortgage payments. And the mortgage servicers are under tremendous stress as they’re dealing with a record number of requests for payment relief.

With the recently reported 14.7% unemployment rate and a much worse number undoubtedly coming for May, another stimulus payment will be a godsend for some families. If you’re in such a position, you might have to decide whether to pay off a credit-card bill first, or your mortgage, or perhaps an auto loan.

Assuming life’s essentials are already paid off (food, water, electricity, medical needs, and so on), the general rule of thumb is to try to pay down the highest-percentage debt first. The idea is to eliminate the debts that are exerting the greatest drag on your bank account.

Again, that’s just a rule of thumb and isn’t ideal for all situations. Still, it’s often a good idea to pay off high-interest credit-card debt first, as the banks that issue those cards are notorious for sending individuals into massive debt through compounding interest and hidden fees.

Now, let’s say you’ve got all of that taken care of – first of all, congratulations as you’re doing better than most people. Since 78% of Americans live paycheck-to-paycheck, if you’re actually saving money, you’re ahead of the majority and paving the way for financial independence.

Here’s what you definitely don’t want to do with the money: splurge on non-essential items. That might sound obvious, but Walmart chief executive Doug McMillon recently reported a trend that’s great for his company but unfortunate for the American middle class.

According to McMillon, hordes of shoppers spent part or all of their stimulus checks on items they don’t need. “Call it relief spending, as it was heavily influenced by stimulus dollars, leading to sales increases in categories such as apparel, televisions, video games, sporting goods and toys,” he said. 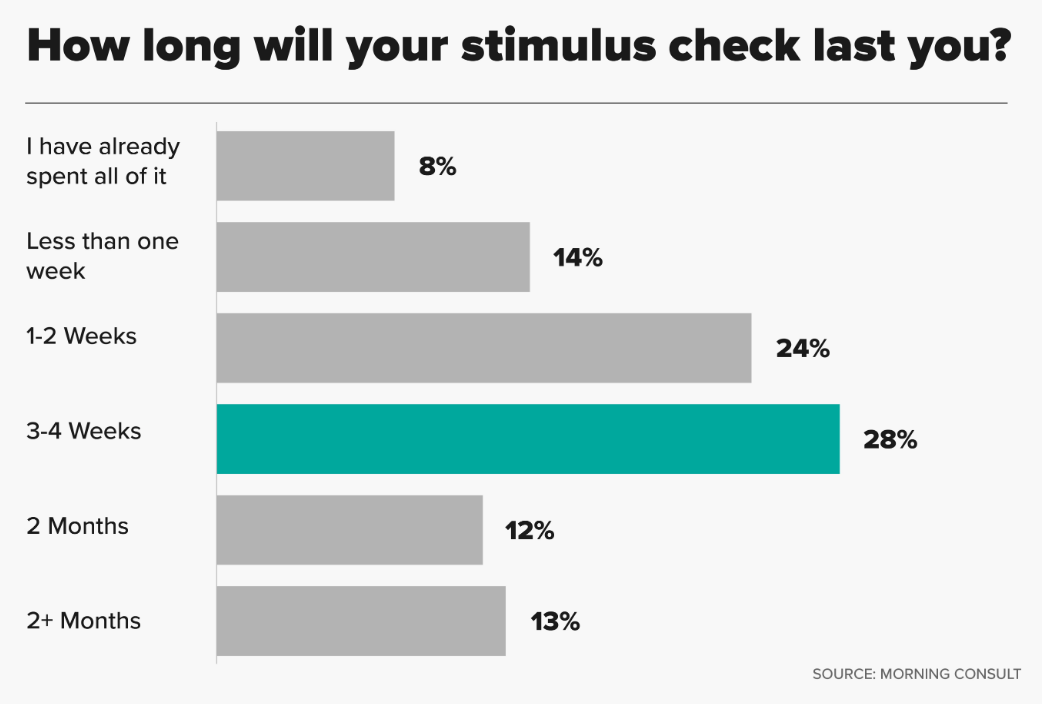 Walmart even saw an increased demand for adult-sized bikes after the first round of relief payments was sent out. Unless you’ve lost your car and need a bicycle to get to work and back, this should be considered a non-essential item and might not be the best possible use of the funds.

Granted, these types of purchases can provide a short-term boost to the economy; moreover, it’s understandable if you want to have some fun after you’ve been cooped up. However, purchases of non-essential items don’t make sense for most struggling individuals and their families right now.

A more sensible option would be to own things that are likely to increase in value. Some types of investments are unavailable to small-scale investors, but just about anyone can participate in the stock market. Nowadays, the brokers’ fees are typically very low and educational materials are available – just check out all of the reports here at Crush the Street and you’ll be well on your way.