PANDEMIC OUT OF CONTROL: Full-Fledged War!

A true war is now being fought on U.S. soil. Both of America’s largest Mercy-class hospital ships with 1,000 beds capable of receiving 200 patients a day have been deployed on both the east and west coasts of the country to battle this pandemic.

In my own personal life, I’m aware of three people that have been infected with Covid 19, and two out of the three have been hospitalized with one of them in a medically induced coma. By no means a representation of the overall statistics, but a serious enemy none-the-less.

This is a disease that originated from an animal that the human body is much more disadvantaged in being able to defend against, because it’s foreign to our body’s immune system. It’s proving to be more virulent than a flu and my hope is that it doesn’t mutate into something even worse for a second wave that could potentially hit in the fall, which we’ve seen historically happen in prior pandemics such as the Spanish Flu of 1918.

The markets have yet to fully price in the economic shutdown this is going to have on the global economy.

“It works ’til it doesn’t”: that policy has worked pretty well for the past decade if you’ve been buying every dip in the stock market. The Federal Reserve backstopped the economy time and again, making it practically impossible for investors to fail.

The banks were “too big to fail” and while half of Americans don’t own any stocks or funds, those who did own them benefited from a 400% ride up plus dividends since March of 2009.

This time, however, the Fed’s bazooka is getting extremely exhausted and the coronavirus is exposing the vulnerabilities of the economy.

America’s central bank already pushed the Fed funds rate to basically zero. With interest rates at rock bottom, the Fed has now gone to next level attempts to spur a reaction in the economy: $700 billion in asset purchases, then $1.5 trillion, and finally limitless, open-ended QE Infinity.

It’s a frenzy environment for sure to contain the economic recklessness.

The Fed is more reactive to the banks’ demands now than ever before. Long gone are the days of Paul Volcker and fiscal discipline. The one time Jerome Powell experimented with quantitative tightening, the stock market vomited 20% and there was talk of firing Powell. Thus, now the Fed Chairman can only appease and accommodate the ever-growing demands of the banking system. 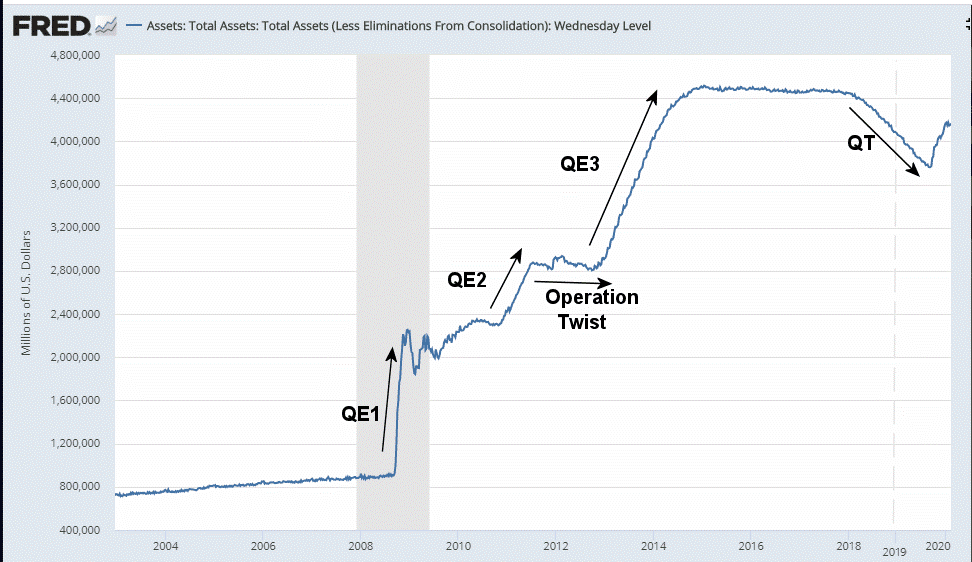 But no amount of quantitative easing can control the coronavirus pandemic and the toll it’s taking on the economy. The $2 trillion relief/bailout package approved by government only represents around 10% of the U.S. GDP. The $1,200 check you’ll get won’t last long, and people won’t spend their checks on luxury items. All in all, that money won’t provide much of a boost to the economy.

Policymakers are essentially battling against a pathogen that moves much faster than any government ever could:

And we literally have world leaders getting sick now, including U.K. Prime Minister Boris Johnson, who is currently self-isolating and trying to lead the government via video conference. Clearly, the coronavirus pandemic has gotten out of control and governments are failing in their efforts to contain it.

The stock market will continue to swing wildly in both directions, but nothing can mask the economic damage that’s been done. TSA travel is down 90% and the airlines, hospitality, and tourism industries are devastated. Meanwhile, the American energy sector is broken as Russia and Saudi Arabia have chosen an unfortunate time to put U.S. shale companies out of business.

Corporations from Viacom CBS to Molson Coors are withdrawing their 2020 financial guidance because they can’t effectively predict how deep the fiscal damage will be (and/or they just don’t want to admit it). Workers are being sent home in droves – we’re keeping people isolated to fight the virus but creating economic suicide at the same time.

But ask yourself this, “what’s the alternative?” Send people back to work to essentially backtrack every effort that’s been made? The layoffs are necessary at this point and unemployment benefits will need to be expanded – not that the corporations really mind this, since now they can feel good about laying off their employees, knowing there’s a greater safety net to soften the blow. This, of course, will only encourage even more layoffs. 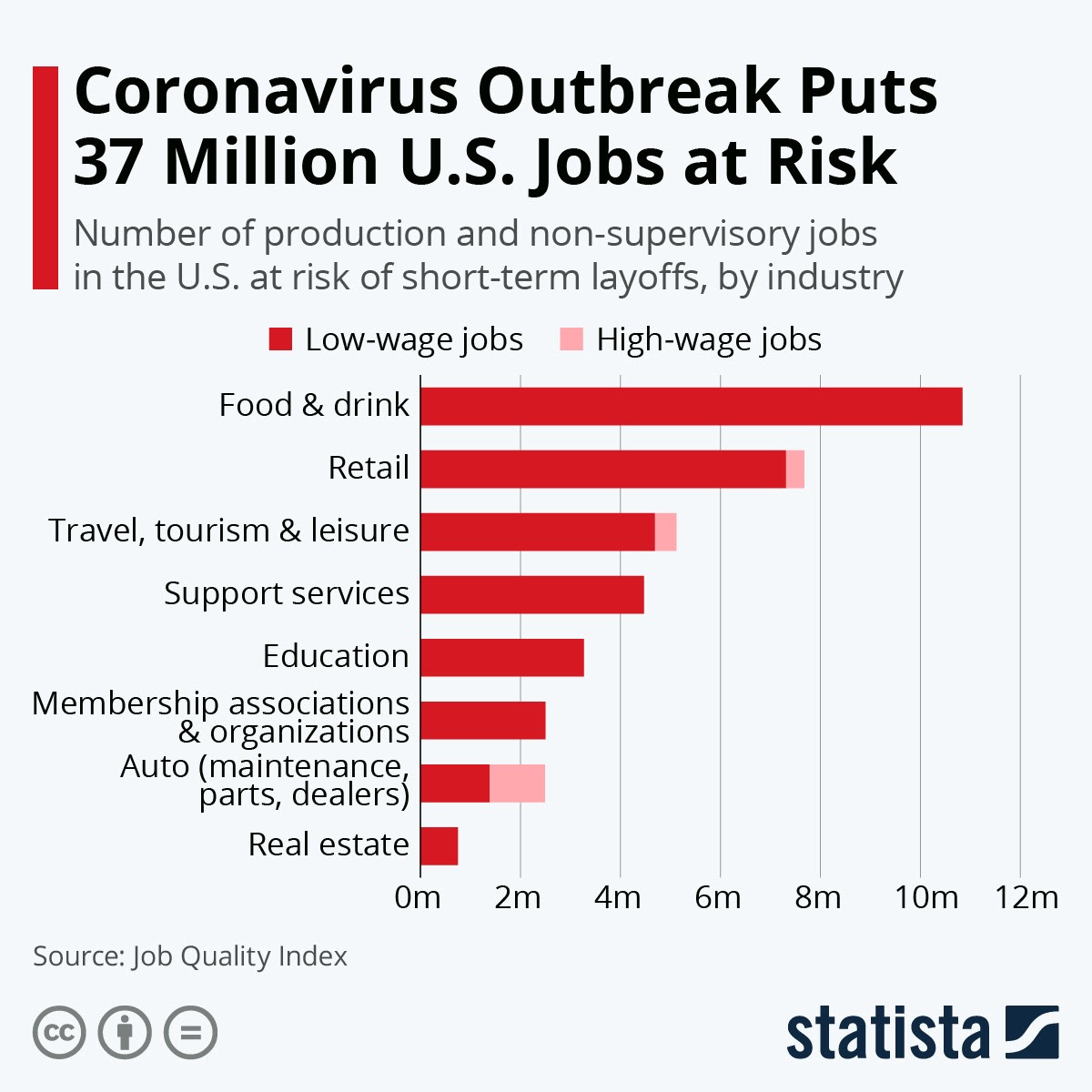 The layoffs are only the first wave; the next phases include bankruptcies, defaults, and a transfer of owners. That’s what a deep, lasting recession looks like. In its fruitless attempt to stave off the inevitable, the government has cranked up the money-printing presses. But with this bailout of Wall Street and individuals, the currency will get debased and America’s biggest export will be inflation.

Naturally, Congress and the Federal Reserve don’t want this to happen on their watch. They’ll fight it tooth and nail, pushing QE Infinity to its logical limit and approving bigger and wilder bailout packages. Don’t expect any of it to provide more than a temporary boost to the economy or the equities markets.

With so much more pain in the pipeline to come, there will undoubtedly be an over-correction to the downside. This will be peppered with multiple head-fakes and sucker’s rallies, which experienced investors will recall were common during the 2008-2009 stock market crash.

One of my biggest points I’ve stressed is our psychology during market moves. During the bull market greed times and the bear market crashes, do you have the mental fortitude and resilience to handle the emotions of the market without getting steamrolled.

This is a time when you will be tested as an investor.

Stimulus Not Enough: Illusions are Being Shattered! – Jerry Robinson