Buying a financial instrument that will outlive you: it’s an odd concept and a sign of the times, something most rational folks have trouble wrapping their heads around. Yet here we are, charging through the second half of 2019 and our own government is floating the idea of bonds maturing in 50 or even 100 years.

“We are going to start with 50 years, and if the answer is 50 years is successful, we’ll consider 100-year bonds,” declared U.S. Treasury Secretary Steven Mnuchin with a completely straight face. I thought I was reading The Onion when I discovered this, but Mnuchin’s statement was dead serious and entirely free of satire.

Unlike Federal Reserve Chairman Jerome “Bonehead” Powell, Mnuchin is on board with President Trump’s plan to tackle America’s mounting debt aggressively through reduced and delayed interest payments. Reportedly the Trump administration is currently considering issuing the “ultra-long bonds,” with Mnuchin explaining that “It’s quite attractive for us to extend and de-risk the U.S. Treasuries borrowing.”

There is a certain skewed logic to this, as it is alarming that the American government (in other words, the taxpayers) will end up spending $393.5 billion this fiscal year on interest payments on the $22.5 trillion national debt. That’s completely wasted money which could be spent on education, infrastructure, health care, or just about anything more productive than servicing our ballooning debt burden.

That, along with the need to keep the stock market from dropping, is the chief rationale for ultra-low government bond yields. You won’t hear the Treasury Secretary admit this, though, as Mnuchin would rather have the populace believe that “Low interest rates are good for economic growth.”

​
And so, the government wants to refinance the debt much like a cash-poor married couple might refinance a home they can’t really afford: extend the repayment term duration, lower the payment amounts, and assume that you’ll be dead before they get all money you owe them.

Of course, this has the long-term consequence of burdening our grandchildren with a problem that we collectively created. Just like with refinancing a mortgage with smaller payments, this doesn’t reduce the total payment; if anything, delaying and reducing the individual payments will increase the total outlay.

Plus, there’s another potential issue: longer-duration bonds tend to have higher yields than shorter-duration bonds. This contravenes the government’s stated objective of keeping interest payments on the debt as low as possible. On the other hand, yield-curve inversions are so normal nowadays that there’s nothing preventing the Fed from pushing 100-year Treasury yields lower than all of the shorter-duration bond yields.

Perhaps the government is counting on the U.S. dollar being so devalued in 50 or 100 years that it will be much easier to pay off the national debt by then. This logic almost sounds sensible, as no one would deny that the dollar’s value is melting like an ice cube in a heat wave: 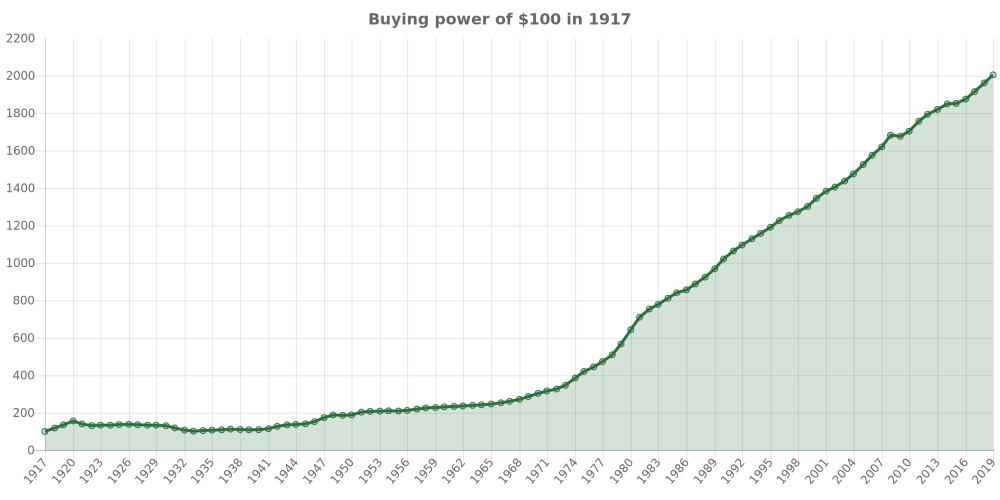 Besides, there’s no denying that other countries are already using ultra-long-term sovereign bonds. Currently, over a dozen developed nations offer bonds with durations from 40 to 100 years; Canada has had a 50-year bond since 2014, and Ireland, Belgium, and Mexico have issued 100-year bonds.

Corporations have issued century-long bonds, as well. For instance, J.C. Penney issued $500 million worth of 100-year bonds in 1997; the interest rate on those bonds was of 7.625% – pretty enticing, right? Actually, those bonds now trade at 22.5 cents on the dollar, and there’s a long way to go before they mature in 2097.

I suppose we could blame that on J.C. Penney’s problems – the Amazon-induced “retail-pocalypse,” as they call it – more than on any inherent shortcomings of 100-year bonds. There’s a whole lot more at stake, though, when the world’s most powerful nation ventures into experimental finance than when J.C. Penney does it.

Not that any of us can stop this from happening – it’s the next tool they’ll reach for when they’ve run out of room to slash interest rates. With the interest payments on the federal debt set to exceed the entire national defense budget within 10 years, there’s pressure to do something, or at least look like they’re doing something.

And so, the government will kick the can down the road once again – very, very far down the road, until we’ve gone too far and can’t find our way back.