96-Month and Subprime Auto Loans – It is All Good Until…

Have you ever had the pleasure of attending a NHRA professional drag racing competition? I personally prefer the Top Fuel Nitro category, at night, as close to the line as possible with ear protection. What a rush!

Under full throttle, dragster engines consume 11+ gallons of nitromethane per second vs. a 747 jetliner, which consumes jet fuel at the same rate with 25% less energy output. To exceed 300 MPH in 4.5 seconds, dragsters accelerate 4Gs, and to reach 200 MPH before half-track, launch acceleration is near 8Gs. We’re talking 8,000 horsepower. You feeling me? The sport takes counterparty risk to a completely new level. It’s like sitting on the launch pad next to a SpaceX Falcon Heavy rocket launch. When you stand near the starting line or sit anywhere along a track’s parallel seating arrangement, the engine roar penetrates your bones and the visual experience lights up your neurons. Go live life and try it. NASCAR circle jerk racing is Matchbox toy car competition in comparison. If you want to know the down and dirty of how those fire-breathing monsters work, Popular Mechanics produced a great and short documentary, How a Top Fuel Dragster Works.

Here is a rear-wing GoPro view…

While we are on the topic of acceleration… auto loans and household debt to da moon, Alice! 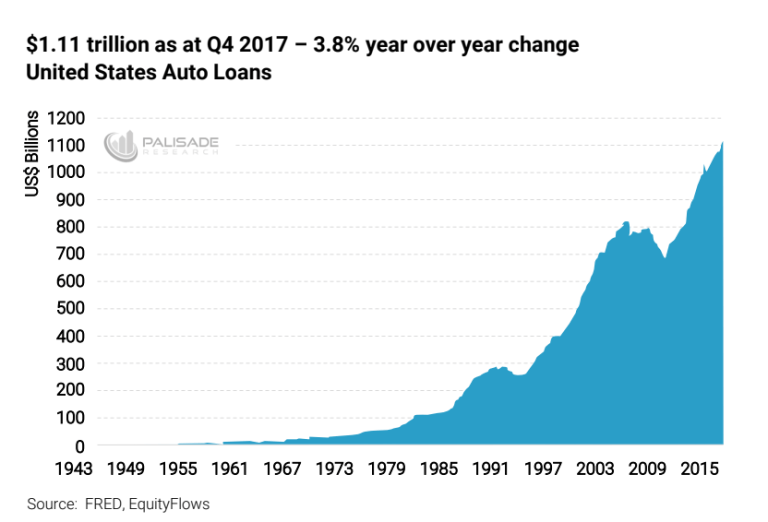 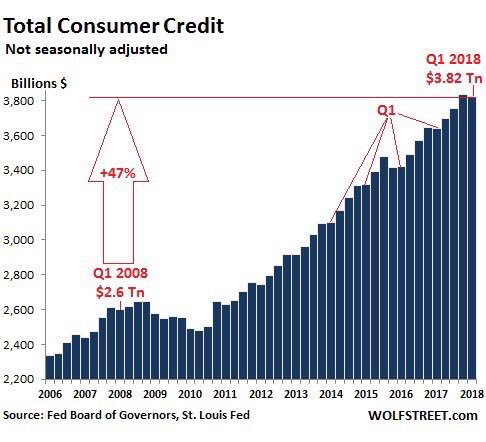 The car buying rush is not doing too well…

Underwater Car Loans Are Bigger Than Ever… “Car dealers have become more loose about exactly to whom they will sell cars. We’re not just talking about the sketchy ‘buy here, pay here’ dealers, either. Mainstream dealers are playing loose and fast with car loans as well… For example, auto researcher Bozi Tatarevic recently tweeted a chart of credit scores and loan terms to qualify for a Kia Stinger. The chart goes into relatively low credit score numbers, though at high interest rates. Even at a 580 credit score, you can own a new Stinger GT2 for just $1,009 per month for 72 months… that’s a lot of coin for a Kia. After factoring in the 11 percent interest rate, the $53,000 loan inflates to more than $80,000, which is probably the most expensive Kia ever… a year after buying my Subaru WRX, I still owe a bit more on it than it’s worth… In the meantime, more and more people are ending up in this situation. Bloomberg reports that nearly one-third of all trade-ins are now worth less than their loans, up from about a quarter just ten years ago. What happens if suddenly the economy busts and many people can no longer afford their car loans? The bubble bursts, just like the housing bubble did in 2008. Cars will be repossessed and sold at a significant loss, which hurts the economy as a whole.” – TheDrive, Jan. 2018

The WSJ Also Uncovered The Source Of The Next Consumer Debt Crisis… “As we detailed previously, the Federal Reserve reported most recently that US consumer non-mortgage debt has never been higher: as of December 31, 2017, US households had a record $1.0 trillion of credit card/revolving loans, a record $1.3 trillion of auto loans, and a record $1.5 trillion of student loans. Among these, credit card and auto loans, in particular, have been experiencing accelerating delinquencies, but the very gradual increase in aggregated Net Charge-Offs has allayed any economist concerns about the state of the US consumer… Wages are rising only slowly and some consumers have simply taken on more debt than they can handle.” – ZeroHedge, Mar. 2018 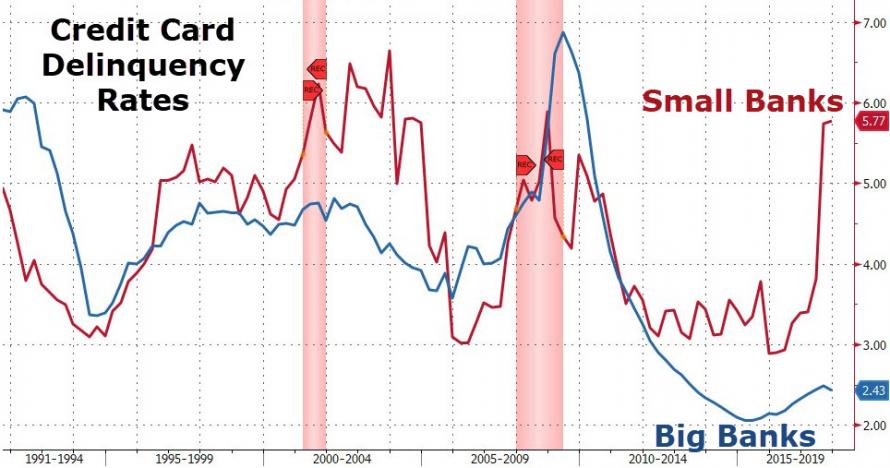 But wait, consumer confidence is soaring because the plebes have record savings, right? Try again.

Americans Are Borrowing More Than Ever For Cars… “Americans are not just borrowing more to buy vehicles, they are also extending the time it takes to pay the loans, taking an average of 69 months to pay off new-car loans and just over 64 months for used vehicles, according to Experian.” – TheDrive, Mar. 2018

But don’t you worry a bit because obtaining that car loan with an expert problem solver is just a click away. Here are a few examples of “out of the mainstream” financing opportunities you can find online.

ezAutoFinance.net is described as a “premier online auto loan expert financing company” with easy approvals and no money down… 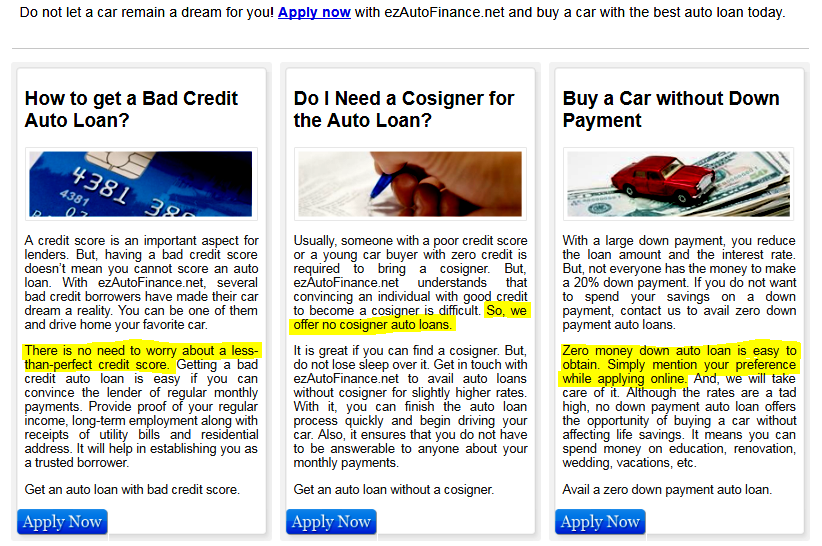 Credit unions are in the game, too, like the Justice Federal Credit Union…

Hey, do not worry about that bad credit history others reject you for. Get better rates and the perfect opportunity to better your credit score as well. “It is like killing two birds with one stone” at CarDestination. 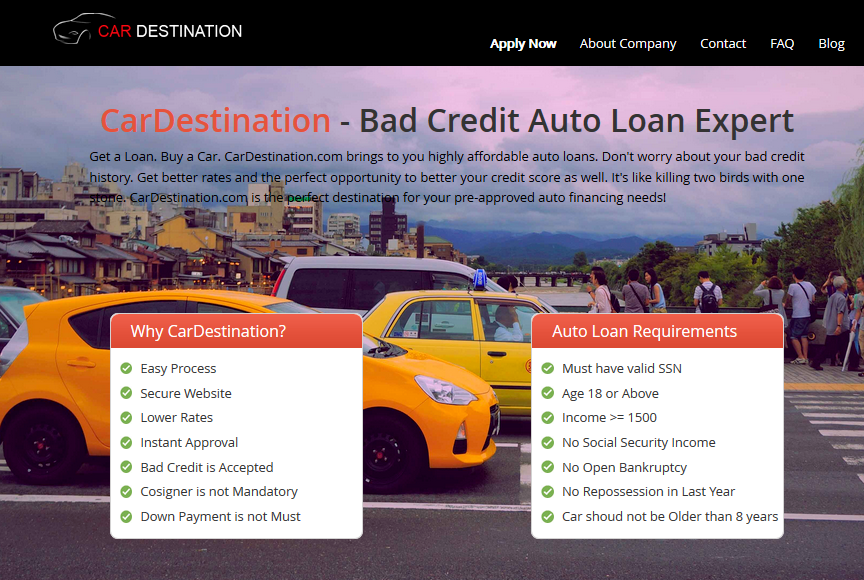 According to the Consumer Financial Protection Bureau, last year, 42% of auto loans were for six years or more. That is 72 months. Now we are seeing 96-month loans, or 8 YEARS. Here is a local news report on the acceleration of auto loan lifespans from FOX 5 in Atlanta, Georgia.

In the meantime, with all the household debt accumulating, more analysts are blowing the horn on maxed-out consumers while the economy is approaching the end of a business cycle that precedes a return to recession.

U.S. Consumer Spending ‘Maxed Out’, Saxo Bank’s Steen Jakobsen says … “Citing several factors including growing credit loans, a widening fiscal deficit in the U.S., doubts over infrastructure spending plans and a potential trade war. ‘I think overall we have been pricing in for Goldilocks and we are closer to Frankenstein to be honest,’ he said. He added that in a scenario of a potential sudden economic recession.” – CNBC, Mar. 2018

Just when you thought things were looking peachy, with Rocket Man supposedly in Teflon Don’s pocket and all, the counterparty risk brewing in the derivatives casino of securitized loans is not “bulletproof…”

Consumers Skip More High-Rate Auto Payments Than During Crisis… “Borrowers in the U.S. are defaulting on subprime auto loans at a higher rate than during the financial crisis, according to Fitch Ratings… The delinquency rate for subprime auto loans more than 60 days past due reached the highest since 1996 at 5.8 percent, according to March data, the most recent available from Fitch. That compares with default rate of around 5 percent during the financial crisis in 2008… Subprime-auto asset-backed security sales are on pace with last year at about $9.5 billion compared to $9.6 billion a year ago, according to data compiled by Bloomberg. With new transactions from Santander, GM Financial, Flagship, and Credit Acceptance expected to hit the market this week, volume may exceed 2017’s total of about $25 billion. This bond market looks very different than it did even a few years ago. An influx of generally riskier, smaller lenders flooded into it in the post-crisis years, bankrolled by private-equity money, which pursued the riskiest borrowers in order to stay competitive… Bond investors generally consider those securities bulletproof, as issuers bake in credit protections to insulate buyers from losses” – Bloomberg, May 14, 2018 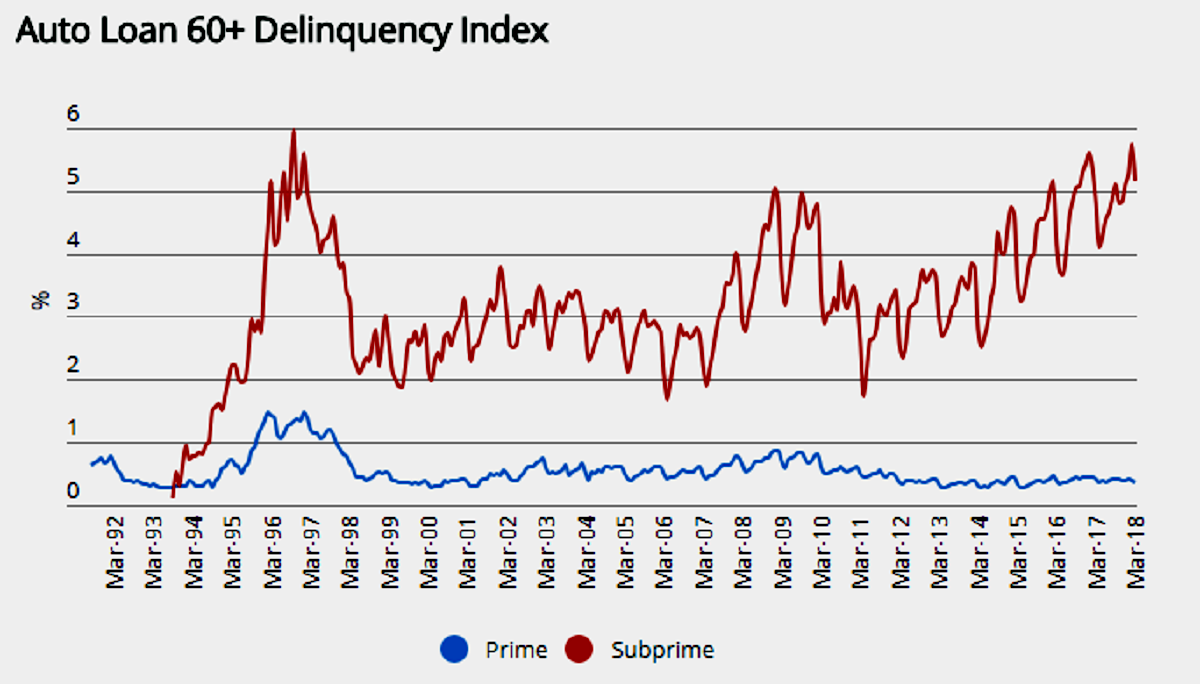 What is most interesting about the economic charade is that consumers are defaulting on subprime auto loans at a 22-year high when the economy is supposed to be doing really well. I cannot help but Déjà vu over how the most recent housing bubble developed. Back then, homeowners mailed the house keys back to the loan servicer, but today, the servicer is sending out the repo man for your car and keys before the house. Usually, folks default on other bills before the car payment because if you do not have a car, you most likely cannot work or commute around to all those other life obligations.

This time around, it appears the cars are going before the house or the apartment, which is not a good sign. IMHO, the Fed’s short-term interest rate hikes are making the current subprime auto loans unserviceable, in addition to weakening the economy.

Are The Wheels Coming Off The System? – Investment Research Dynamics, May, 2018

In the meantime, used car prices are plunging the most they have in nine years… 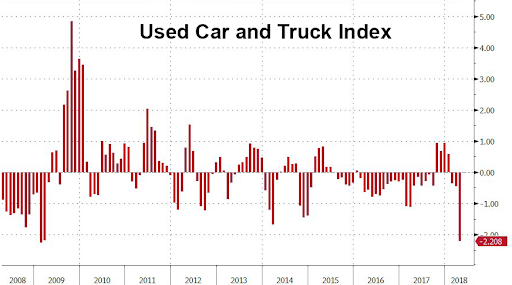 It is all good until it is not. Wait for it from both angles…