The Dow Jones Industrial Average closed above 29k today for the first time ever at 29,030 points, and as my fingers type tonight, the futures have added several more points on the ticker. If you thought the market could not party in 2019 and early 2020 like it was 1999, Goldilocks may have shattered any concern you have about underlying fundamentals. However, the big bad bear is growing extremely impatient behind the curtain while the bull soaks up the limelight and bows to his own version of “irrational exuberance.”

“But how do we know when irrational exuberance has unduly escalated asset values, which then become subject to unexpected and prolonged contractions as they have in Japan over the past decade? And how do we factor that assessment into monetary policy?” – Alan Greenspan, 1996

If you missed or have already seen Peter TooGood’s irrational exuberance rant on live financial TV, it is still worth your time.

“One of the most brutally honest mainstream media interviews is the following CNBC Squawk Box clip out of Europe from last Monday, which ranks second next to Jim Cramer’s 2007 meltdown during the run-up to the Great Financial Crisis. Yes, Peter TooGood is his real name, and taking the 2007 phrase “until the music stops” from the former CEO of Citibank, Chuck Prince, is too good to be true, but it is true” – TraderStef, Dec. 2019

When we juxtapose the current stock market party against the super-rich and central banks hoarding gold, the recent behavior displayed by German citizens might behoove you into reviewing and potentially adjusting your current portfolio allocations.

German Government Escalates its War on Gold… “From Jan. 1, 2020, new national legislation was to take effect that would dramatically reduce the threshold on anonymous buying of precious metals from the existing €10,000 limit to a far lower limit of €2000, all under the guise of money laundering prevention. So when the German government throws up restrictions on such a fundamental right as anonymous buying of gold and other precious metals, Germany’s citizens took notice and did what any rationale economic actor would do in the circumstances – buy as much gold as they can get their hands on before the deadline. Hence, the queues and long lines outside gold shops included some of Germany’s biggest gold dealers… Germany’s leading investor magazine summed up the situation. ‘Large gold traders such as Pro Aurum and Degussa are currently experiencing massive bottlenecks in gold products and customers are literally buying their shelves empty. We are currently being overrun,’ says Raphael Scherer, managing director at Degussa. ‘The queues go up into the street.’” – BullionStar, Jan. 13

Bridgewater sees gold rallying as central banks ease… “‘And when you look at the geopolitical strife, how many foreign entities really want to hold dollars? And what are they going to hold? Gold stands out.’ Although rate cuts by the Fed have bolstered equity markets, Mr. Jensen said the group was ‘more cautious’ on U.S. stocks, describing them as ‘frothy’. He warned that ‘most of the world is long equity markets in pretty extreme situations’, particularly in the U.S., raising the appeal of emerging markets. ‘A decade-long outperformance of the U.S. is now being extrapolated, so people are generally under geographically diversified.’ U.S. stocks ended 2019 with their best year since 2013, with the benchmark S&P 500 rising nearly 29%.” – FT, Jan. 15

The long-awaited signing ceremony for the first stage in a trade deal with China turned into a bust for the market as the terms and conditions surrounding the deal put a damper on the early enthusiasm by market close.

Stocks reverse gains following the signing of US-China trade deal… “The U.S.-China trade agreement includes provisions to curb intellectual property theft along with forced technology transfers… the deal does not remove existing U.S. tariffs on Chinese imports and leaves questions as to how the terms of the agreement will be enforced. The deal is also seen as ‘fragile’ by some analysts who believe additional levies could still be implemented.” – CNBC, Jan. 15

The impeachment coup of the POTUS finally made its way over to the Senate today after Nancy Pelosi signed the articles, which the market interpreted as a big yawn because everyone and A.I. automated trading knows the Senate is unlikely to follow in the footsteps of the House’s sedition.

One well-respected analyst, Byron Wien of Blackstone, injected a dose of reality into markets today with a prediction of higher volatility in 2020 and several corrections greater than 5% throughout the year. He sees the S&P 500 printing a modest 3,500 at the end of the year.

What is the Fed thinking about after injecting more than $400 billion into the financial system with its REPO operations during 4Q19? The Dallas Federal Reserve Bank President Robert Kaplan chimed in last week with the following:

Fed’s Kaplan says rates ‘appropriate,’ flags balance sheet concern… “‘I want to actively explore options that would allow us to restrain from here growth in the Fed balance sheet… I do think the growth in the balance sheet is having some impact on the financial markets and on the valuation of risk assets… I want to be cognizant of not adding more fuel that could help create further excesses and imbalances.’ Possible options, he said, include a ‘hard look’ at the differences between how regulators treat banks’ holdings of Treasuries and reserves, and establishing a so-called standing repo facility that would allow banks to tap liquidity when needed.” – Reuters, Jan. 9

You read that right. Despite the enormous amount of liquidity injected into the financial system since Sep. 2019, which exceeds the pace of QE during the Great Financial Crisis, the Fed might keep the REPO door wide open for an indefinite period with a revolving door for hedge funds. NorthmanTrader recently summed up the effect REPO is having on the stock market and provided an awesome visual of the S&P 500 vs. REPO for the first two weeks of 2020.

Repo Lightening… “Every trading day this year the Fed has unleashed repo operations of varying size in premarket. These are the daily liquidity injections the New York Fed provides in overnight repo markets to keep overnight rates artificially suppressed and to meet rising demand of banks for liquidity. The temporary liquidity crisis has apparently become permanent… The only obvious exception was the first trading day of the year, also the smallest repo operation of the year… Correlation does not necessarily equate causation, but we can observe regular, get me in at all cost, vertical jams in prices with little to no price discovery in between except the now also regular tight intra day ranges. How to test the theory? Simple. Try not doing repo for a few days and watch what happens. Just try it. But of course they won’t. Too scary.” – NorthmanTrader, Jan. 14

After the Fed injected an additional $82 billion into the financial plumbing yesterday, an inflation metric released today is the weakest since 2016, which may entice the Fed to plunge the pedal through the floor with another interest rate cut. That would put a portion of the U.S. bond market into real negative interest rate (NIRP) territory in a hurry and make our debt much less attractive.

The only economic metric holding up the economy and market besides the Fed’s REPO operation is the consumer, which is responsible for roughly 75% of GDP. Despite initial reports of a blockbuster holiday shopping season, the Fed’s Beige Book for 4Q19 has confirmed my suspicion that retail sales would flatline with only a modest gain at best.

“Consumer spending grew at modest/moderate pace. Number of Districts noted some pickup from prior period. On balance, holiday sales were said to be solid, with several Districts noting growing importance of online shopping.”

I recently had to confront the “can’t beat them so join them” mentality while debating monetary policy with a colleague. It is unfortunate how many folks remain clueless. Jim Rickards penned a prescient article a couple days ago that should assuage any misguided soul who believes that adding digital zeroes and printing worthless paper can readily solve their own financial woes or the world’s for eternity.

Today’s technical analysis on the Dow and S&P 500 ETFs will focus on the weekly chart and eliminate the daily noise. To view a larger version of any chart, right-click on it and choose your “view image” option. 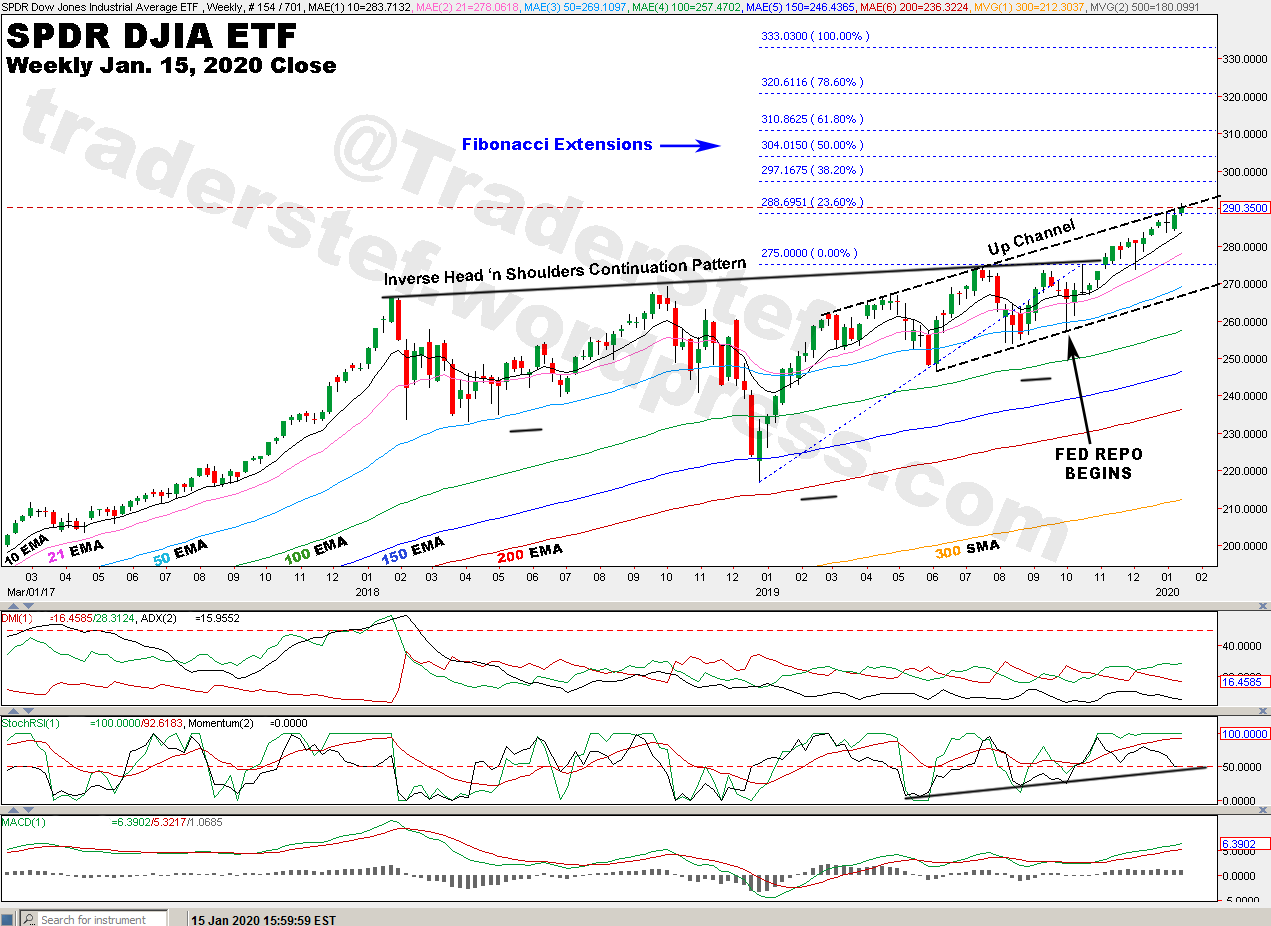 “At first glance, the Dow is clearly in the bullish camp. I have included Fibonacci extensions to identify near-term resistance levels if the price action continues higher. The lateral breakout price was $275. The DIA closed at $279.33 today. The topside resistance trendline drawn back to early 2018 was taken out after the price chopped within an Up Channel for seven months, all of the Moving Averages remain below the price action and in bullish alignment, and the StochRSI is spiking to the upside.”

The Up Channel and Inverse Head ‘n Shoulders continuation pattern are now confirmed with the price rally having breached the first Fibonacci Extension at $288.69, and today’s close of $290.35. There is no resistance while trending into these new highs and only Fibonacci levels can serve as a guide until a chart history manifests. The DMI-ADX remains positive but flat overall since the low in Apr. 2018 and the MACD uptrend is intact.

Two negatives that are indicative of a potential correction in the near-term are that the StochRSI is stuck in overbought territory since late Oct. 2019 and the Momentum indicator is rolling over and ready to test its lower trendline drawn back to a low in May 2019. 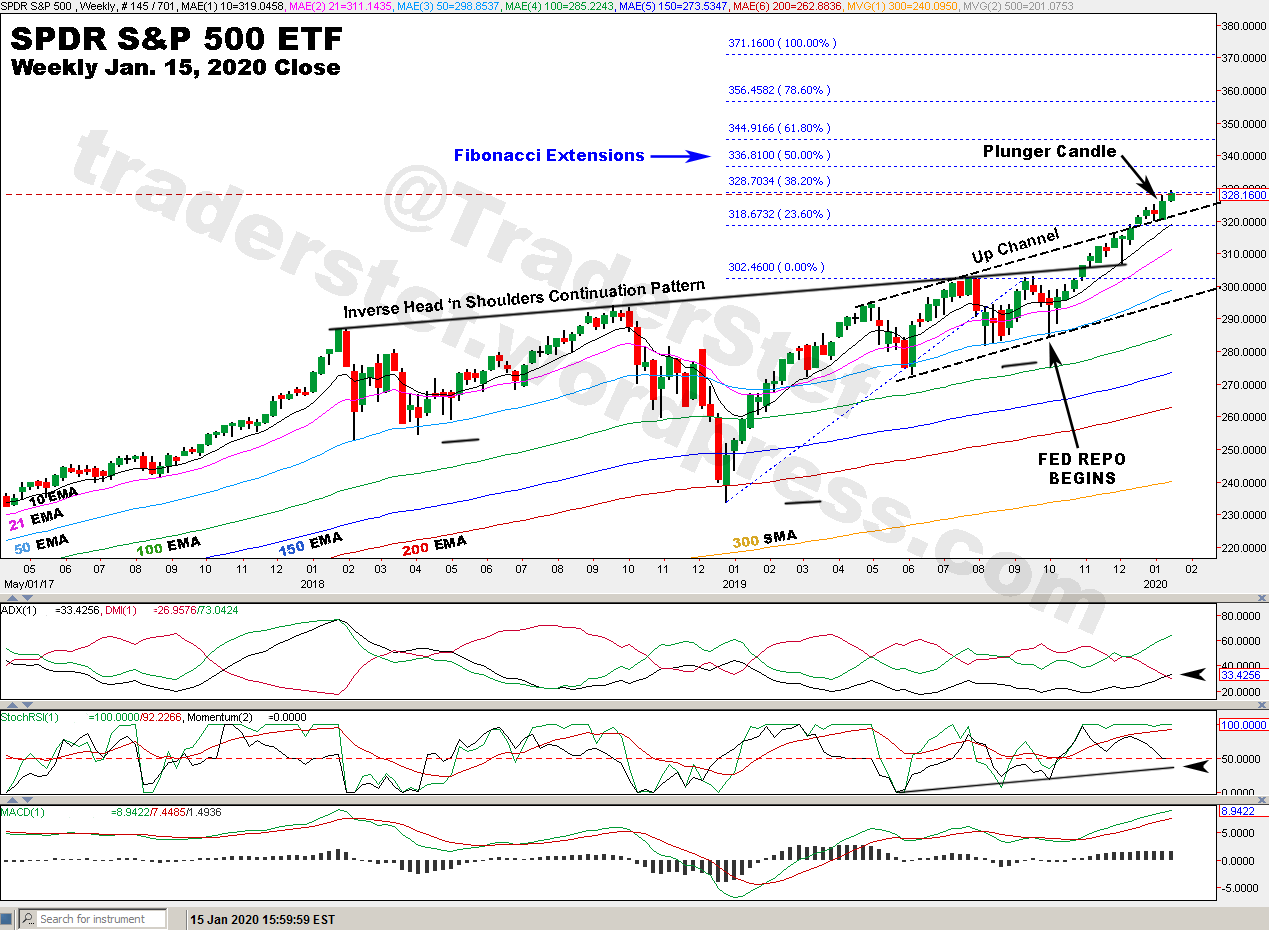 “There is not much of a difference between the DIA and SPY chart. One exception is the MACD’s attempt at a positive crossover. The lateral breakout price was $304.55 and the $SPY closed at $311.91 today.”

There are only two differences between the SPY and DIA charts today besides price points. The first is a Plunger Candle (aka Shooting Star with a long body) that printed last week, which increases the potential for a price correction in the near-term. The second is the DMI-ADX that is setting up with a bullish Alligator Tongue pattern.

My expectation for the price action going forward remains the same as it was in Nov. 2019, short of a major event that shocks the market to the downside. Both charts remain bullish and are ripe for downside and upside Scalping opportunities rather than long-term core positioning. A substantial retreat will eventually occur and sidelined cash will take advantage of those lows.