The most recent gold technical analyses can be found at The Big Boo on Gold published on Oct. 31, The Wither of November from Nov. 30, and a Gold and Silver Sweetspot Alert Update on Dec. 7.  To view a larger version of any chart, right-click on it and choose your “view image” option.  Here is my commentary and chart from the Dec. 7 alert. 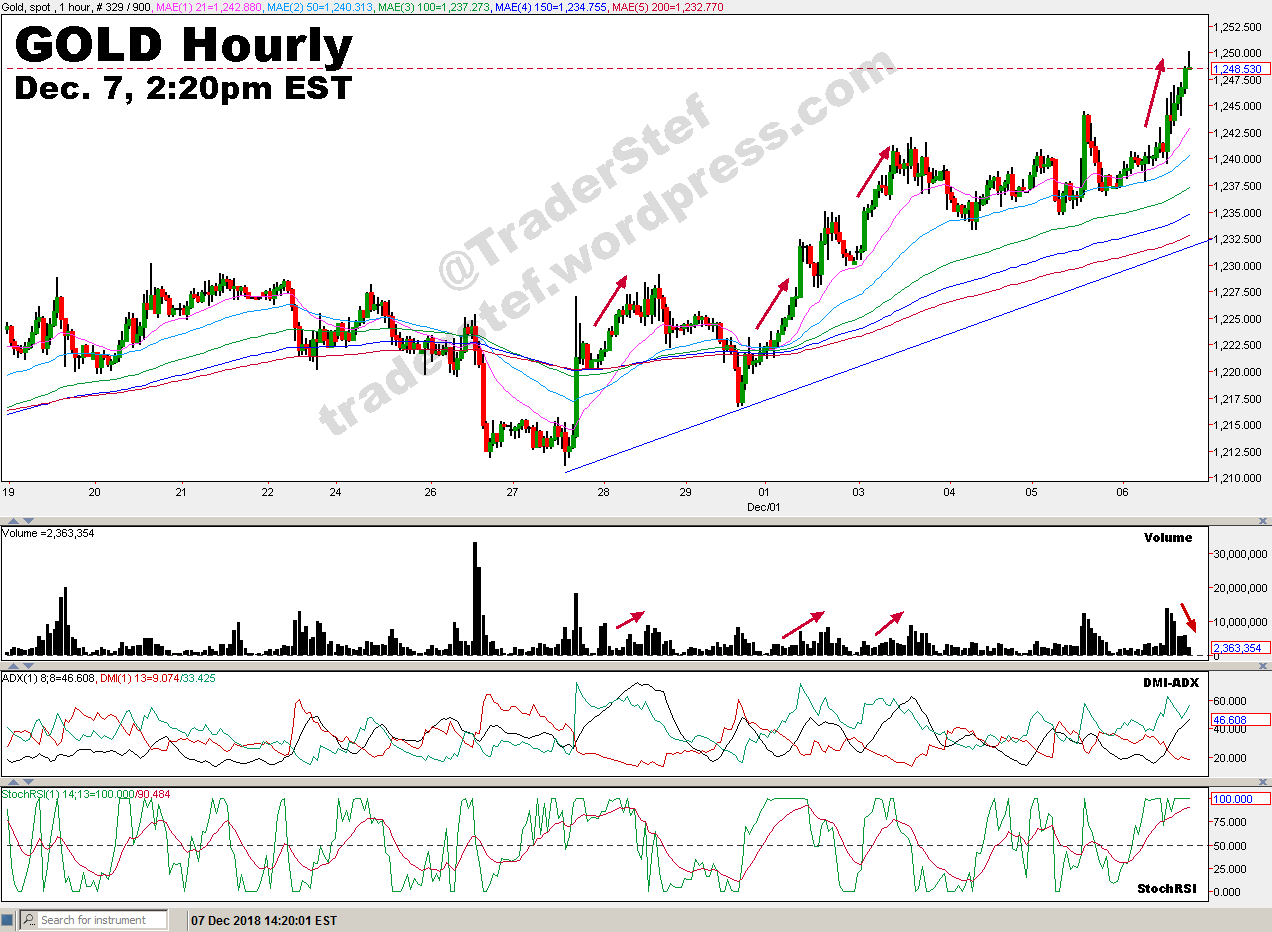 “Price has reached a level of substantial resistance in the low $1,250s.  The StochRSI and DMI-ADX remain bullish but volumes are falling as price is rising today, and that Divergence may indicate a correction is near. If you are in a swing or intraday position, it would be prudent to decide before close of day whether you prefer to hold through the weekend – or take profits and re-enter after the $1,250 level is taken out on strength.” 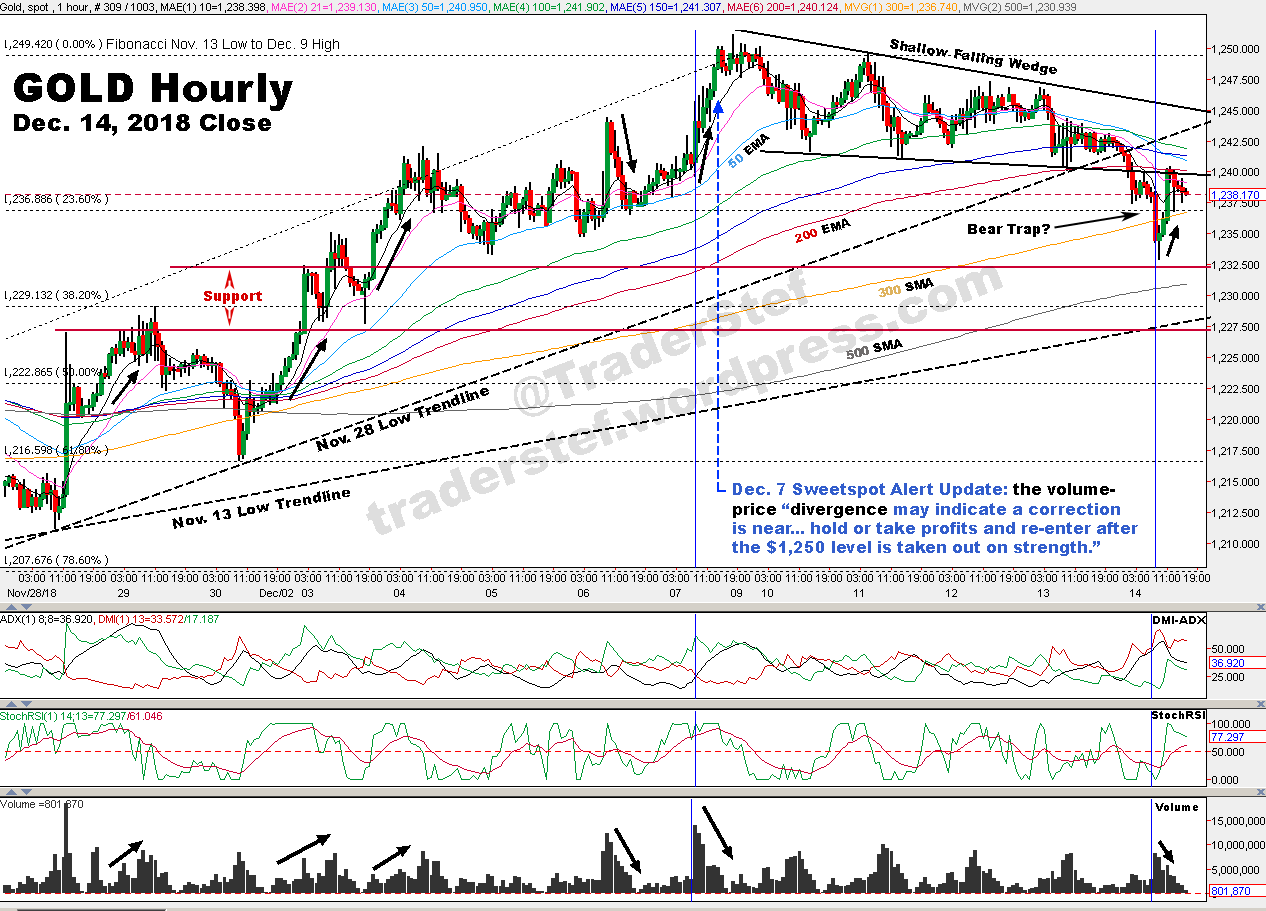 As of Friday’s close, the divergence call was timely and within a few hours of a price reversal. Whenever a sudden divergence occurs in the direction of the volume and price, that is a heads-up that the current trend may take a breather or sustain to the downside if additional studies are violated.

A shallow Falling Wedge pattern developed after Dec. 7, and price eventually violated the 50 Exponential Moving Average (EMA), the Nov. 28 lower trendline on Dec. 13 at 11pm EST, and the lower trendline of the Falling wedge on Friday at 2am EST.  The volume rose on Friday morning, along with a spike in price, then the volume fell with a falling price going into the close. That dynamic formed a potential Bear Trap just below the Falling Wedge’s lower trendline.  A Bear Trap will confirm if price does not violate Friday’s low and the price pivots upward and decisively takes out all overhead EMAs and challenges the Dec. 9 $1,251 high. The DIM-ADX is slowly rolling over, and the StochRSI remains in positive territory, which indicates there is potential for a retest of the $1,251 high sooner than later. 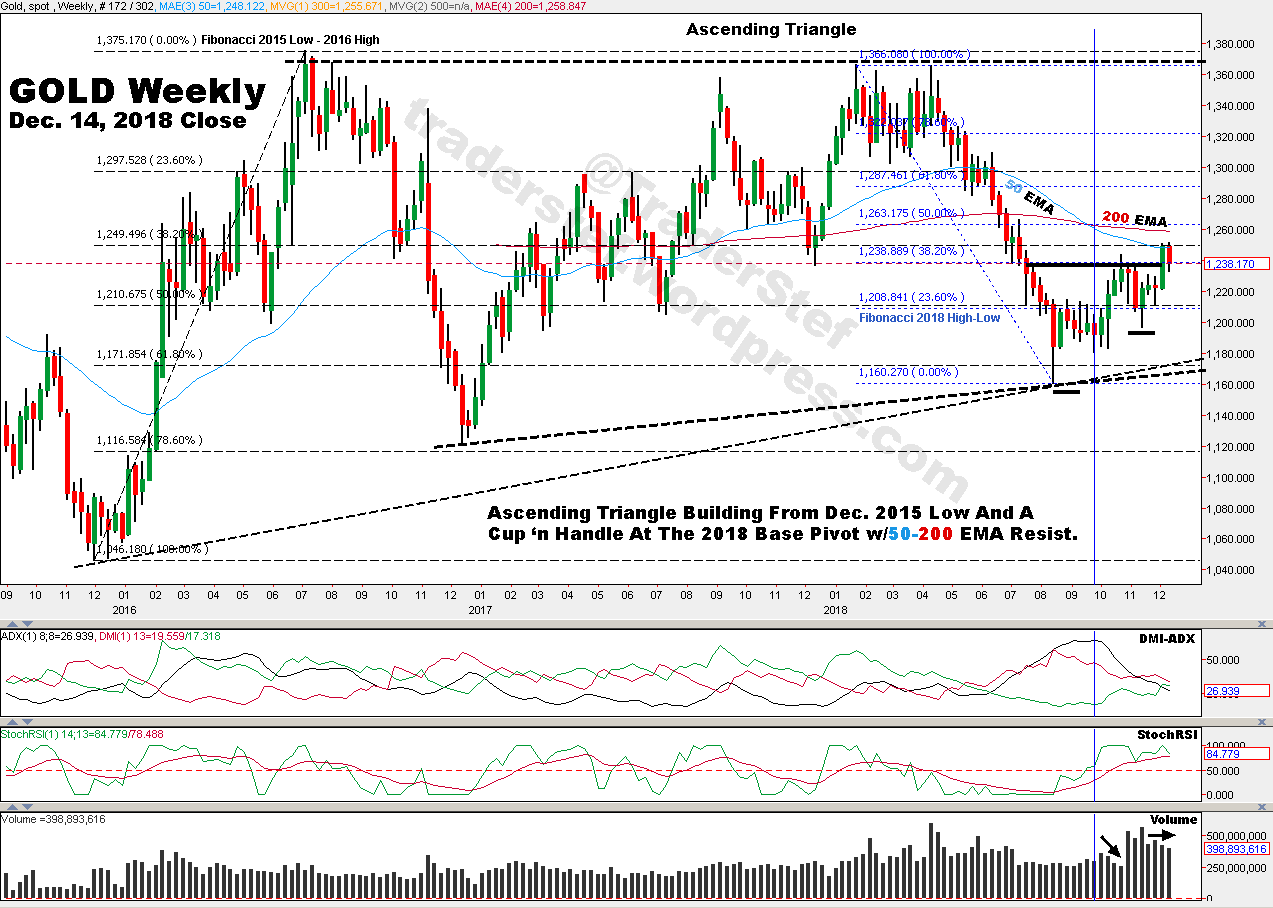 The weekly chart tells another story and may clarify.  Following the price swoon for most of 2018, a well-defined Cup ‘n Handle pattern developed following a pivot off the 2015 lower trendline, which was noted in a Dec. 5 Tweet, as well as the Dec. 7 sweet spot update alert.  Throughout the Cup ‘n Handle, volumes fell along with price and then rose or remained steady during a price rise.  The Cup ‘n Handle rim line is tied to the hip with the $1,238 Fibonacci level taken out on Dec. 7, leading to the high of $1,251, but the next Fibonacci at $1,249 and the overhead 50 EMA acted as resistance and the price retraced to a $1,233 low on Friday morning.  If the 50 & 200 EMAs are taken out with rising volume, the odds favor a sooner retest of $1,300.

I suspect that short of a gold positive or negative news item, the price will remain stable until the FOMC meeting announcement on Wednesday.  Following the FOMC, we have the potential for a government shutdown over the weekend. I must remain neutral on price until the $1,251 high is taken out with conviction on the price and volume. 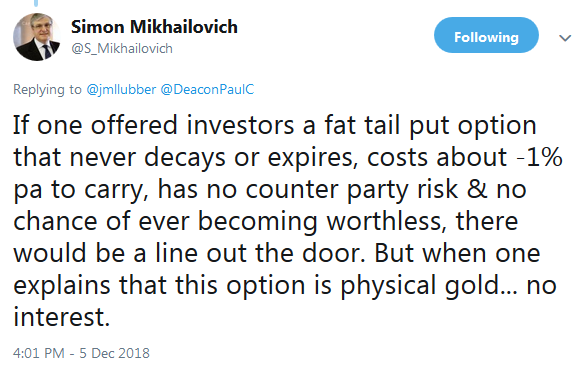 Keep in mind that the current average all-in cost of production (AISC) per ounce for the top gold miners stands at $1,210, which just happens to be the Fibonacci level I have discussed on numerous occasions due to its significant support and resistance history since the Dec. 2015 low.  The following chart is courtesy of SRSRocco on Nov. 24. 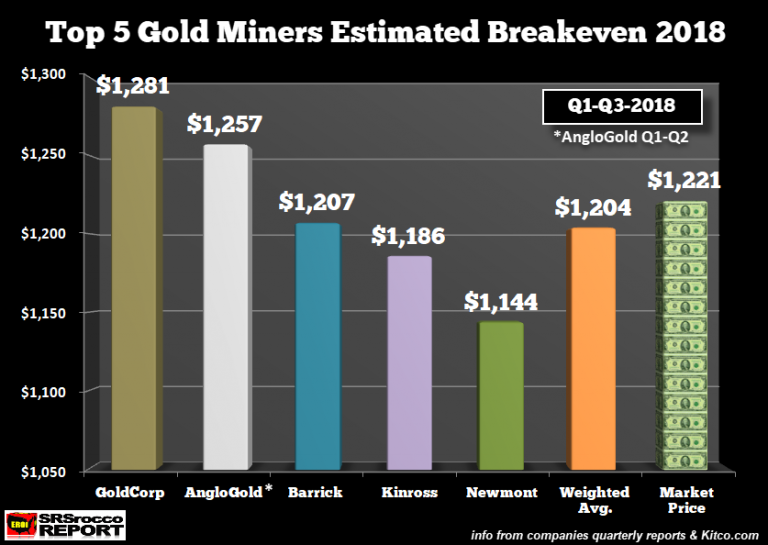 Jim Sinclair is so confident in his conviction of where the price of gold is going from this point in time that he added an additional 50% to his position on Dec. 8.

Much of what will transpire in the stock market and gold throughout 2019 will likely depend upon the FOMC decision this week. Will Jay Powell confirm the TaperCaper with another .25% interest rate piker as the “one and done,” then pause in 2019?

“Next week may be one of the most pivotal Fed meetings in recent memory. Jay Powell will either be the new hero who saved markets or be blamed for what follows. Tough spot to be in with no easy choices… What will the Fed do this week? One rate hike and stop, putting their rate hike schedule on hold into 2019? Not raising rates and admitting the Fed made a policy error bringing its credibility further into question? Reducing the speed of QT? Either way Jay Powell has a tough task this week. He’s the bag holder dealing with the fallout of what Ben and Janet bestowed on him, a market that can’t handle even a neutral rate. Pathetic. Bears have been right all along. The debt construct can’t handle normalized rates. We’re not even close to normalized and already the walls are closing in as the 6 risk factors hang like a sword of Damocles over the market.” – Northman Trader, Dec. 16 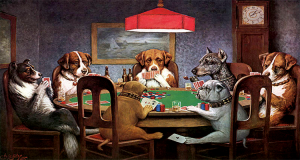