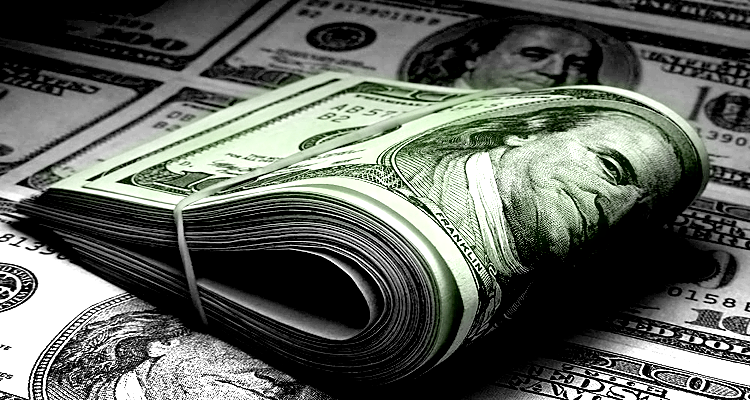 The last time I penned a USD analysis that included an interesting history lesson on its origin was on Jan. 10 with “Silver Dollars, Soviet Nukes, and a Global Currency Reset,” just prior to pandemic reality sinking into the Western psyche. The initial kneejerk reaction to the COVID-19 virus bringing the world to a halt was a plunge in U.S. equity markets that led to an increased buying of dollars by asset managers that needed to rebalance their portfolios. After the Fed stepped in to support central banks around the world to exchange their U.S. Treasury holdings for an overnight dollar bridge and the subsequent trillions in a liquidity firehose that Capitol Hill enabled with the CARES Act legislation in support of the U.S. economy, the USD has dropped 10% in waves of hope and fear. If we cut through the noise from this past year, the trend will likely continue downward based on a few metrics.

Rosenberg: We Are In A Depression… “Not a recession, but a depression. And I think the dynamics of a depression are different than they are in a recession because depressions invoke a secular change in behavior. Classic business cycle recessions are forgotten about within a year after they end – the scars from this one will take years to heal.” – Forbes, Oct. 9

“The US dollar could collapse by the end of 2021 and the economy can expect a more than 50% chance of a double-dip recession… The so-called net national savings rate, also recorded a record decline in the second quarter, going back into negative territory for the first time since the global financial crisis… Lacking in saving and wanting to grow, we run these current-account deficits to borrow surplus saving, and that always pushes the currencies lower. And the dollar is not immune to that time-honored adjustment… As we head into flu season with the new infection rates moving back up again, with mortality unacceptably high, the risk of an aftershock is not something you can dismiss. So that’s a tough combination. And I think the record of history suggests that this is not a time, unlike what the frothy markets are doing, to bet that this is different.” – Stephen Roach, Sep. 24 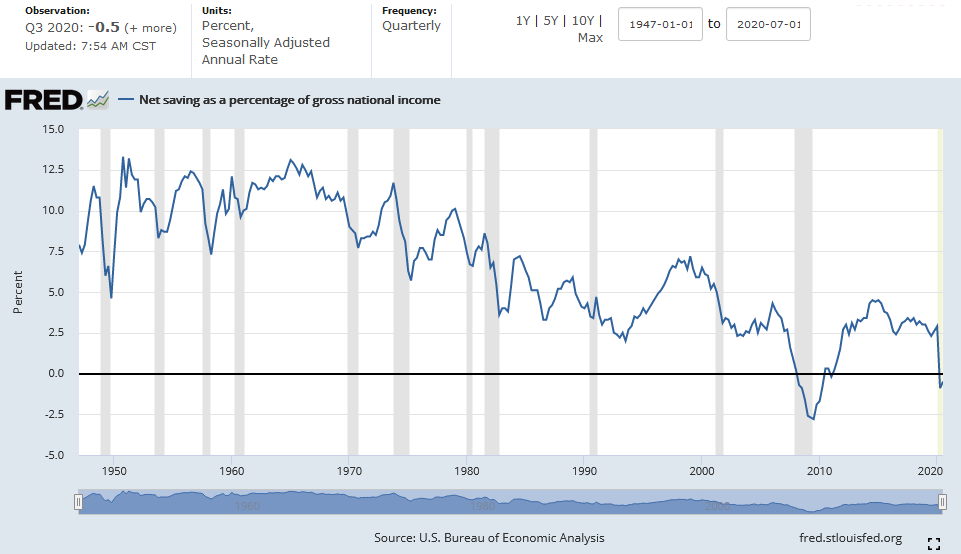 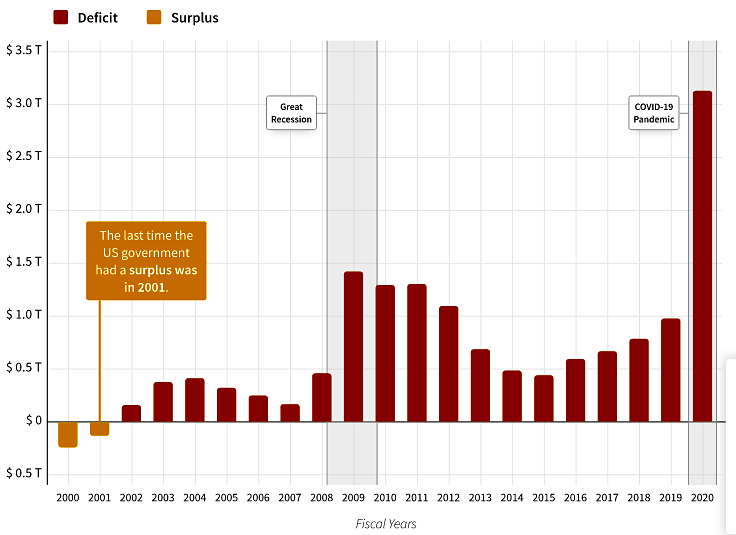 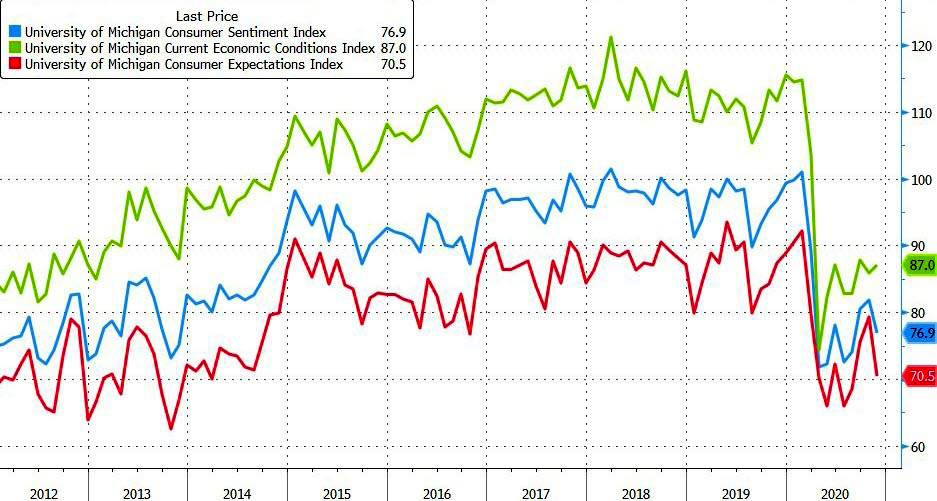 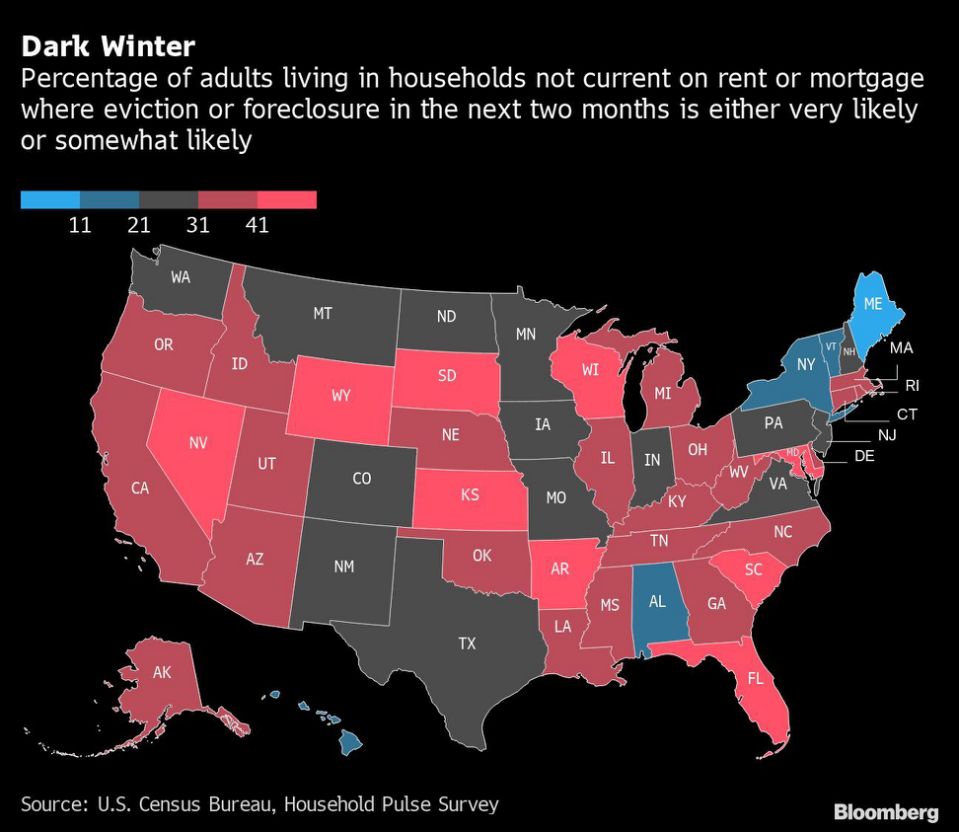 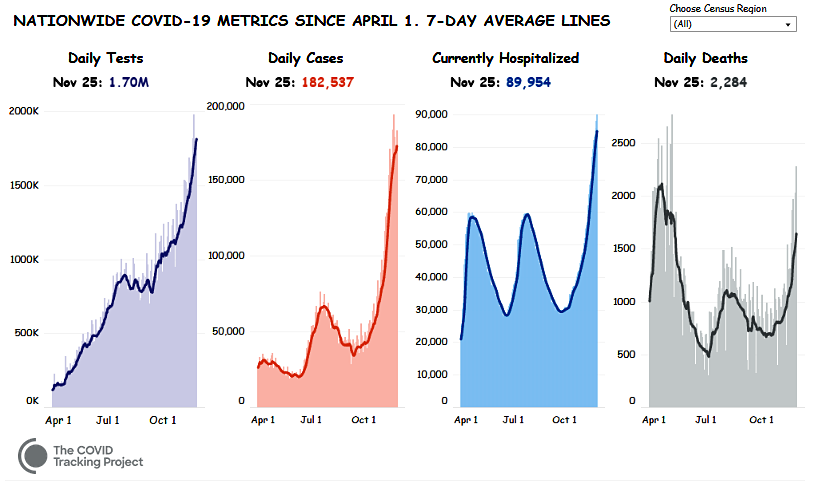 Let’s move on to a brief overview of the dollar’s price action since Jan. 2020. To view a larger version of any chart below, right-click on it and choose your “view image” option. 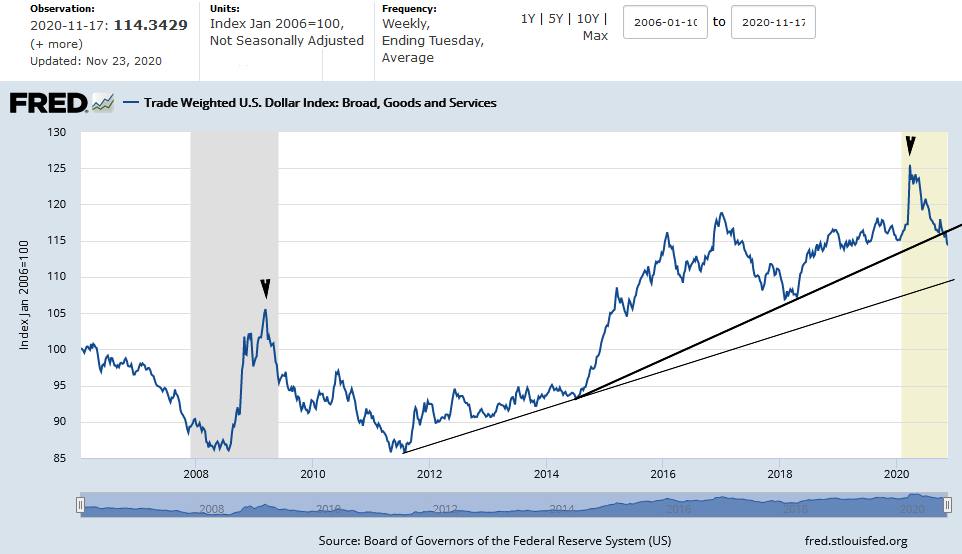 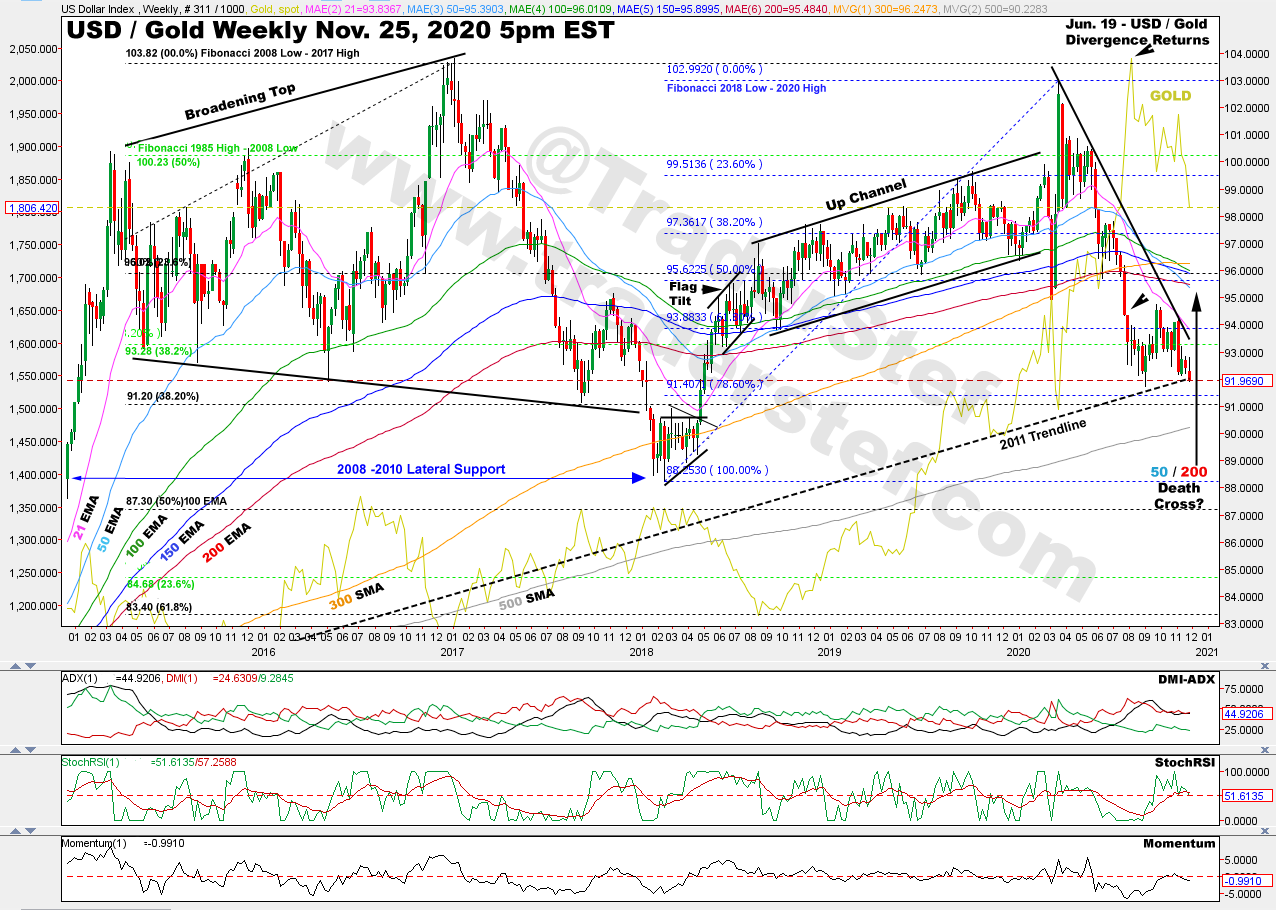 “There is a Broadening Top drawn back to the 2015 high… A pullback (rally) back above the Broadening Top Lower trendline and 50 Exponential Moving Average (EMA) occurred as per a Broadening Top playbook… The 50/200 EMA did not Death Cross… The price has fallen for the past four weeks and printed a $95 low this week, right on top of the 50 EMA and just above the 100 EMA… The USD may kneejerk back into an uptrend.”

“Despite reports of the USD breaking down, when Up Channel trendlines are drawn properly with equal distance between them, the price action has not closed below the channel or printed a lower low… The price closed below the 50 EMA during the first week of Dec. 2019 for the first time since May 2018 but has found support along the Up Channel’s lower trendline and closed above the 100 EMA… The lower support levels are clearly marked with Fibonacci levels and EMAs. A break below the confluence of the Fibonacci level and 150 EMA around 96 are where a lower low may trigger decisive downside price action. I remain bearish long-term on the USD because its overall trend is down, with lower highs since the early 1980s.”

The pandemic’s Herald Wave arrived on U.S. shores as global equity markets turned volatile before settling into their respective trends. The USD was nearing a new high at 102.99 during the second week of March, then began plunging after the initial lockdown announcements and accelerated through several support levels and moving averages into late May through the end of July. The price action has been chopping between 92 and 95 since August and is now showing the first sign of breaching 92.

This afternoon’s closing price was 91.96 and is perched atop a lower trendline drawn up from the 72.69 low in 2011. There are a few immediate support areas that include two Fibonacci levels just above 91, the 500 Simple Moving Average (SMA) in the low 90s, and lateral support drawn back to 2008 that intersects with an 88.25 Fibonacci low from Feb. 2018. This week’s price action has put a bearish 50/200 Death Cross on the table. The DMI-ADX is in a negative momentum trend, the StochRSI appears to be breaking down, and the Momentum indicator is rolling over. The near-term looks bearish.

One notable shift in trend was how the USD and gold transitioned from an atypical correlation and back to divergence in mid-June, which flipped back to a tight correlation during the first week of November. If the USD has a decisive breakdown through the noted Fibonaccis and onto the 500 SMA as gold approaches its seasonal uptrend during the holidays, a divergence will reassert. Gold is currently in an extremely oversold condition and is primed for its next move upward. 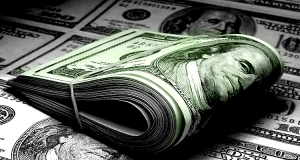