On April 30, 1789, George Washington took the oath of office from a second-floor balcony at Federal Hall in lower Manhattan to become the first President of the United States. I could not find any meaningful coverage across the media landscape today, with the exception of a few social media-based profiles such as MountVernon, URDailyHistory, and OurPresidents. Coincidentally, just as this date formalized the American Revolution’s purpose of ending the tyrannical rule of King George III 230 years ago, today’s New York Times headline story focused on the Venezuelan citizens’ final push to remove a Socialist despot from power through the country’s constitutional process. 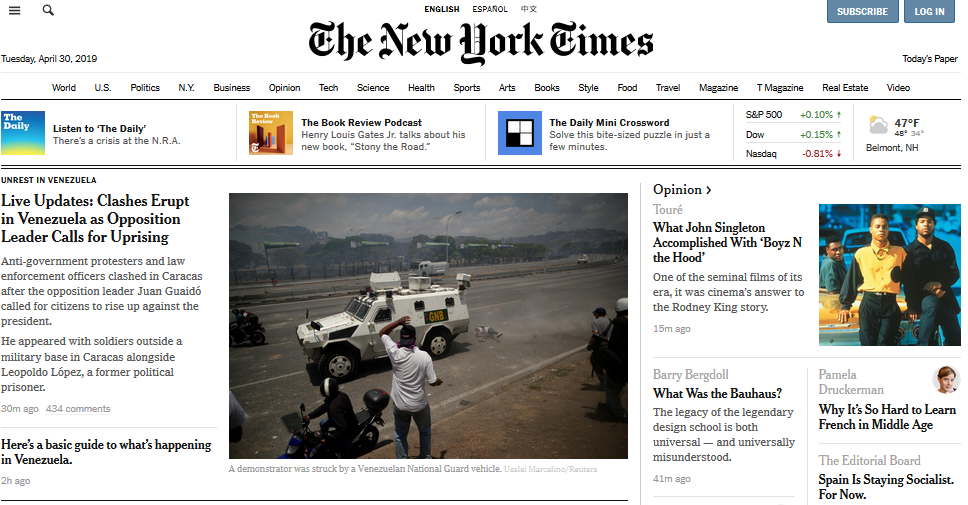 The property at 26 Wall Street was formerly New York City’s City Hall, built between 1699 and 1703, and it hosted the seat of government for the British colony. John Peter Zenger, who was arrested for libel by exposing government corruption in his newspaper, the New York Gazette, was jailed, tried, and acquitted at City Hall in 1735. That court case influenced how people thought about subjects like freedom of the press and influenced the protections embodied in the United States Constitution, the Bill of Rights, and the Sedition Act. 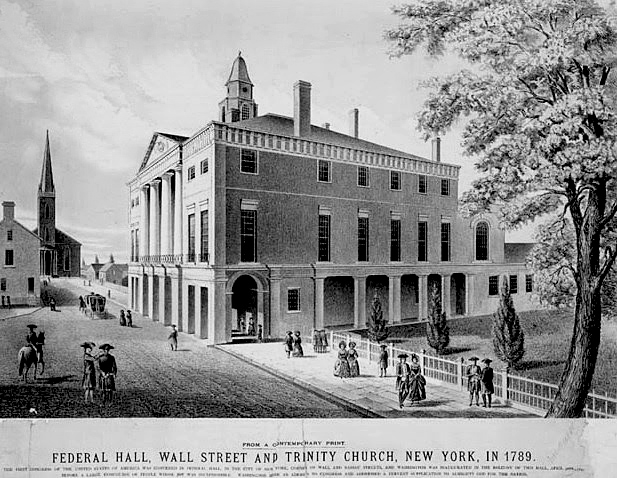 City Hall hosted numerous historical legislative efforts. The Stamp Act Congress in 1765 protested “taxation without representation” by the King of England. After the American Revolution, Congress met there in 1787 to adopt the Northwest Ordinance that formalized procedures for adopting new states. Following a fully ratified Constitution in 1788, Congress added the Bill of Rights in 1789. When the capital moved to Philadelphia in 1790, the building again housed the New York City government. In 1812, City Hall was demolished to make way for the current building that is named Federal Hall. Millions of dollars of gold and silver were once stored in its basement vault until the Federal Reserve Bank and its building down the street replaced the Sub-Treasury system in 1920.

George Washington was an Episcopalian, and when he traveled to New York he worshipped at St. Paul’s Episcopal Church (aka Trinity Church) on Wall Street, wherein his inaugural pew is preserved. Trinity Church occupies a prominent spot within an oil painting rendition of the inauguration by Ramon de Elorriaga in 1889. 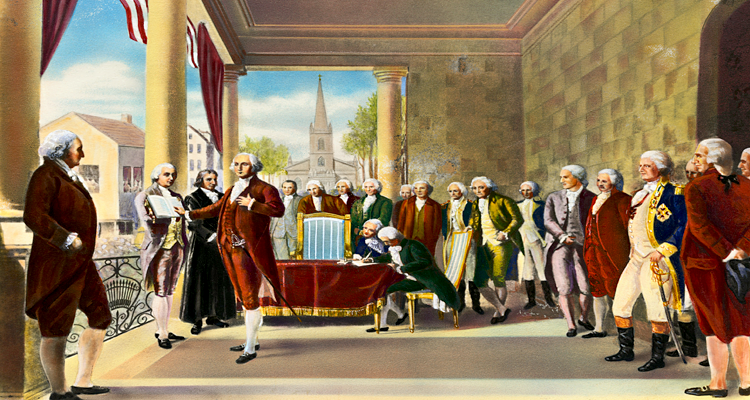 A misconception about the Inaugural Bible is that it was a Masonic one, despite his affiliation with Freemasonry. The members of the First Congress discovered that there was no Bible to be found in City Hall for the inaugural ceremony, so the New York State Chancellor, Robert Livingston, quickly retrieved a Bible only a few blocks away at St. John’s Masonic Lodge. While Secretary Otis of the Senate held the Bible, Chancellor Livingston administered the oath of office with Washington’s hand rested upon a random opening to Genesis 49-50. When Washington completed his oath, he added the phrase “I swear, so help me God” and kissed the open book. The corner of the opened page was carefully folded to preserve the random opening. The Bible was returned to the Lodge, where a noted page was inserted to commemorate the important role it played in the inauguration of President Washington.

After having addressed Congress following his oath, President Washington walked between rows of saluting militiamen on his way to Trinity Church. Martha Washington and both houses of Congress accompanied the new President to a church service by the Episcopal Bishop of New York, Samuel Provoost. On the wall where Washington’s pew was located hangs the first painting of the Great Seal of the United States, commissioned by the Vestry in 1789 to commemorate Washington’s inauguration. For information on how the Great Seal of the United States came into existence and ended up on our currency, visit “A History of the Bald Eagle for the United States Coat of Arms and Money” that I published last year. 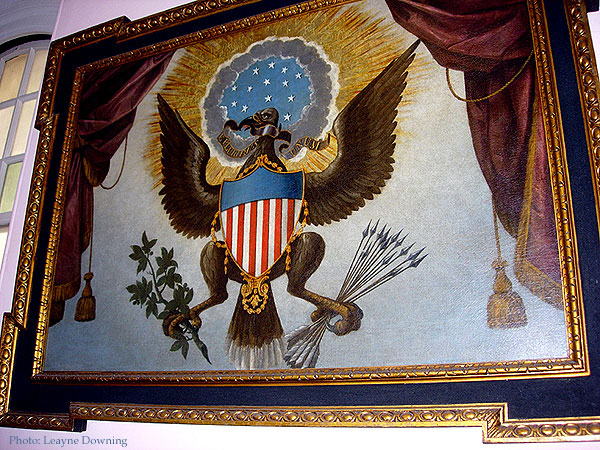 A false impression that historical revisionists make about President Washington is that he was a soulless “slave-driver.” In his Last Will and Testament dated July 9, 1790, he made the following statement about the Slaves on his plantation and bequeathed to them a lifetime trust fund and educational needs. You can read it in full here.

“Upon the decease of my wife, it is my Will and desire that all the Slaves which I hold in my own right, shall receive their freedom.”

President Washington did not want to be referred to as “Your Highness” or “Your Excellency” and opted for “Mr. President” with a more businesslike approach. He also established the moniker “Commander-in-chief,” as it was a military rank he once held. His military mindset influenced how he conducted business and he created a cabinet to work closely with that resembled the war cabinets during his time in the military. He reluctantly accepted the role as President and preferred to have remained on his property in Mount Vernon to retire quietly. Not only did he serve our country and play a huge role in defeating the British, but he also sacrificed his later years that would have been much easier and refused a salary while serving as POTUS for two terms. He enjoyed a little more than two years of retirement at Mount Vernon before he died of a throat infection during the winter of 1799. It is said that he died with the same dignity that he lived his life with, never complaining.