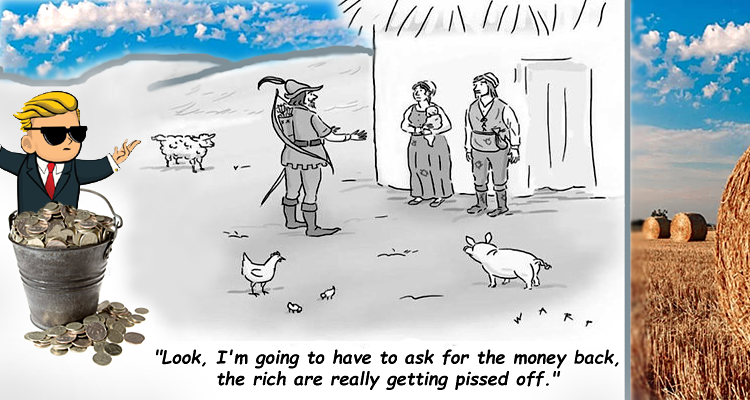 In light of recent events that include the retail precious metals industry being wiped out of physical silver bullion inventory, mayhem in select equities before a few precious metal mining stocks and ETFs were targeted via Robinhood and other brokerage platforms, and extreme volatility in the gold and silver spot market despite the balanced Futures data that preceded it, my focus will be on silver today. Unless indicated otherwise, all quotes from my short Twitter thread have dated hyperlinks.

Robinhood pays $65m to settle SEC claims it mishandled trades… “Robinhood failed to provide its customers with the best prices for trades on its platform. The Securities and Exchange Commission said that while Robinhood promoted its services as ‘commission free’, its customers’ orders were processed at prices ‘inferior’ to other brokers. The commission also said the company failed to disclose payments it received from high-speed trading houses that process its orders, payments that may have influenced decisions over how Robinhood trades are executed.” – Financial Times, Dec. 2020

If you missed the big show or turned into a proverbial bag-holding Muppet by chasing the herd, a retail Reddit mob initiated an atrocious plan against main street last week instead of the intended target that were boogeymen at hedge funds and banking behemoths. The plan, as was pronounced publicly across numerous media platforms, was basically a revenge execution via a “silver squeeze” to financially lynch short interest players for the benefit of silver-stackers and mom-and-pop investors.

“SLV, GLD etc… none of them set the price of gold or silver. That is not how the PM market functions. They have to kill real physical supply, or out-buy the Futures market. Amateurs. Now, if real players in Futures decide to have some fun?… not let a good crisis go to waste.” – Jan. 28

Let’s have a look at silver’s Jan. 23 Commitments of Traders (CoT) report released on Jan. 26, and includes one year of futures contracts represented by bars. The data did not shift significantly (and for two days following the report) before the Reddit crew launched a farcical strategy against a non-existent silver short imbalance. 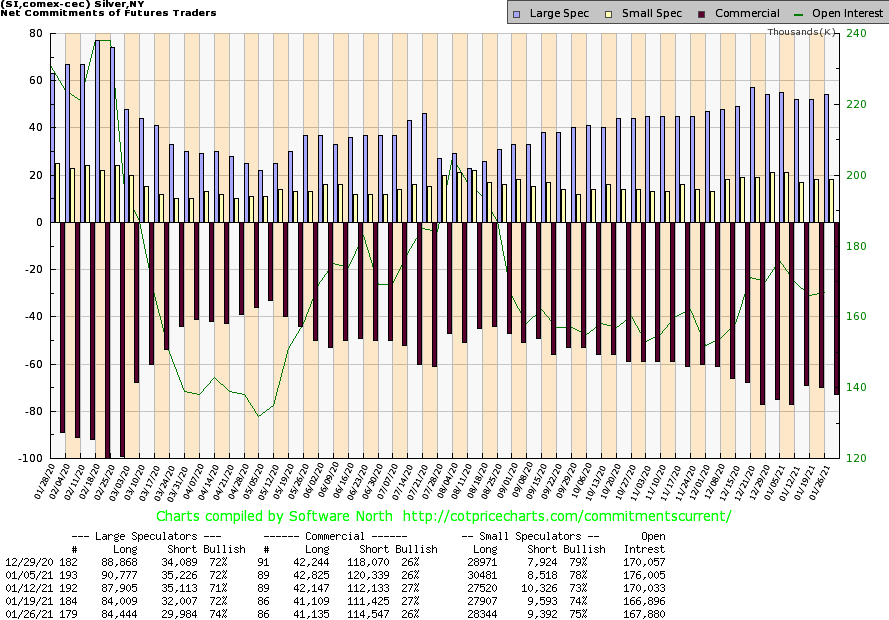 “The spread between Silver Short & Long in CoT was FLAT before Robbin-da-hood fools: Net Long 74,393 (Small & Large Speculators aka Hedge Funds) vs. Net Short 74,392 (Commercials aka Bullion Banking). A balanced picture. There was no huge short squeeze to attack.” – Feb. 1

The strategy was flawed from its outset. Aside from having an opposite effect that immediately followed the very brief price spike, there will likely be SEC, CFTC, or FBI agents knocking on a few doors in the near-future.

“Under 18 U.S.C. 1348 Federal Offense: fines and up to 25yrs of federal imprisonment for engaging in fraudulent securities transactions or using fraudulent practices to profit from others’ purchase or sale of securities.” – Feb. 1

“Get real folks. Follow through (on price). I would love to see it, but the half-baked robbin-the-hood mob plan screws more average folks than it helps. Foolishness. But, whut? Weren’t thinly traded overnight hours the linchpin of manipulation crybabies? Oh, always blaming others but yourself.” – Feb. 1

Reddit’s ‘epic’ silver squeeze is only helping Wall Street… “The merry band of day traders behind runaway stocks like GameStop piled into silver on Monday in an effort to squeeze Wall Street. But metals market experts say the resulting rally is more likely helping, rather than hurting, the big boys.” – New York Post, Feb. 1, 7:30pm

Goldman Sachs says it’s impossible for retail traders to short squeeze silver… “Global commodities head Jeff Currie and other strategists say a short squeeze would be ‘unattainable’ and that regulations around positions have made it nearly impossible for someone to corner the market. They note during the famous squeeze in 1980, the Hunt Brothers were able to acquire a third of the world’s (physical) supply, driving the price up by 713% in three weeks.” – LenexWeb, Feb. 2

I will end this brief rant with a few observations and the silver spot chart for reference. 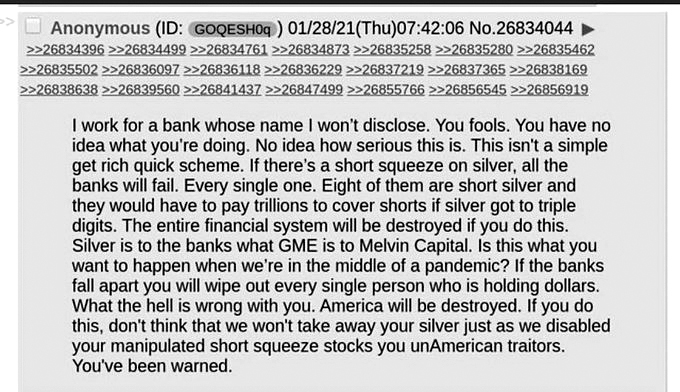 As the Reddit mob began raiding silver from retail bullion suppliers just before and during last weekend, it quickly spiked premiums above spot and wiped-out inventory before mom-and-pop or average Joe even knew what was taking place. It was only a couple days prior that silver coin availability was nowhere near critical, premiums were reasonable, and a bright-uncirculated 1oz American Eagle or Canadian Maple Leaf could be purchased in the high $20s.

We now have a situation that folks who were supposed to benefit are being robbed in the high $30s to mid $40s per ounce with no availability, and supply will remain scarce into the near-future with delayed delivery. Initiating a “steady Eddie” plan to acquire physical bullion to keep supply reasonable, as fundamentals and technicals were fast approaching an upward move through a significant resistance level, would have produced a sustainable thrust upward in price. That would have been an intelligent and legal plan.

“Risk-taking with a process leads to success, while risk-taking on impulse leads to regret”

Equities that were targeted in the stock market or were precious metals specific, now have volatile Christmas trees printed on their chart with technical damage. The naive investor class was likely chasing prices and buying high, selling low on pullbacks, or are still sweating bullets while holding onto losing positions with hopes for a quick reversal. Very few benefited and many were robbed of their capital, savings, or self-respect.

Silver Market Fleeces Reddit Patsies… “The recent silver rally was triggered by a Reddit forum thread called WallStreetBets calling for ‘the biggest short squeeze in the world’… As investors who followed Reddit’s blueprint continued to stockpile ETF shares, other investors sold and probably took profits, with silver having already rallied almost 48% in 2020… Futures market may have driven the rally and the silver forward curve distorted. A very strong build in open interest occurred during the rally and most of it focused on 28 January. Given that silver ETFs saw outflows on 28 January and the spot price jumped 4.89%, this first leg of the rally seems, in fact, to have been driven by Futures market rather than ETFs… Later during the rally, the silver forward curve saw its second-strongest front-end backwardation since 2000. This exceptional situation may have happened as Swiss coin sellers were reportedly overwhelmed by online purchases of silver coins creating a short-term shortage of silver to melt. Since then, the market has normalized and the silver forward curve is back in contango.” – Macrobusiness, Feb. 4 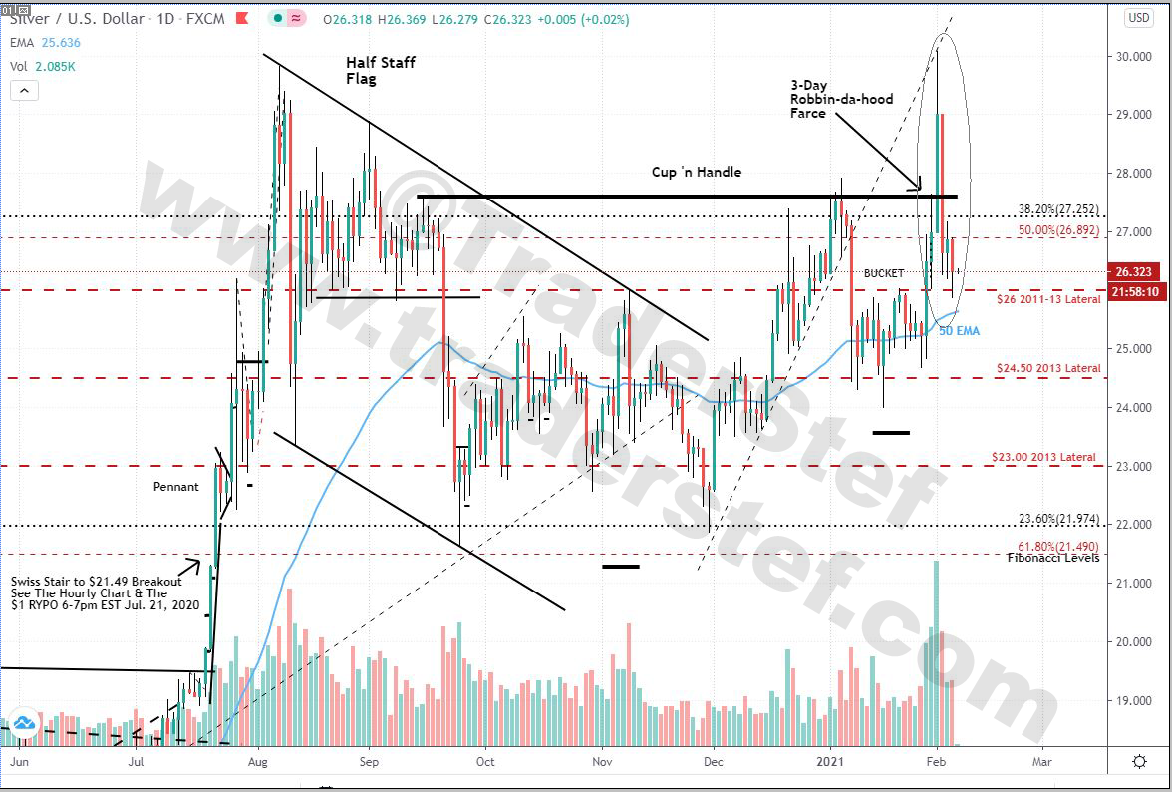 The actual sweet spot during silver’s price spike occurred on Jan. 31 after the Sunday night open, and within a brief window of opportunity in Asia to Europe during the overnight hours in the U.S. The price punched through the Cup ‘n Handle’s $27 rim line and onto $30 during the early morning hours in London. The price had already plunged before Monday’s EST stateside pre-market open, then chopped violently all day at $28 and change. During pre-market on Tuesday, the price action had already broken below $27.

The best opportunity to capture any substantial benefit occurred outside of U.S. trading hours, but GLOBEX access afforded large Futures players to game the foolish plan launched by a merry band of amateurs. The plan ruined the near-term technical picture and potentially delayed gains for everyone else, as a bullish fundamental and technical picture were nearing a breakout without the need for narcissistic gamers.

Any seasoned professional in the precious metals industry, the “silver squeeze” organizers, and pundits that encouraged or cheered on the debacle, should be as ashamed as Judas. 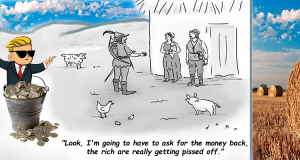