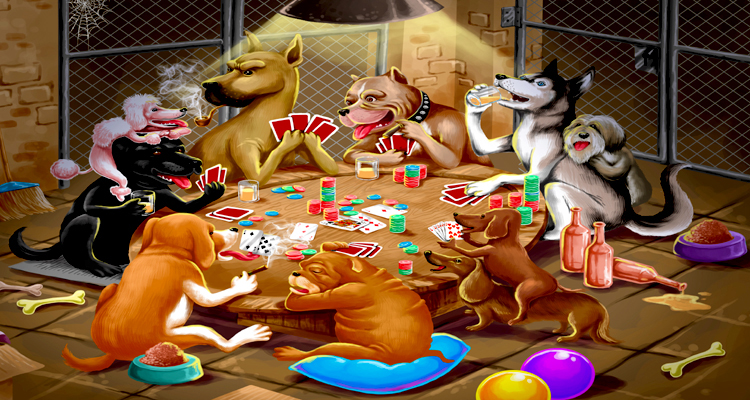 After publishing “Silver Still Needs a Few Dollars More for a Breakout” on Aug. 26, the troll farm questioned the legitimacy of a $21.49 Fibonacci as the only number that mattered. Whether you are stacking silver or trading the paper markets, individual goals among investors vary and available capital certainly influences those decisions. It is important to differentiate which sides of the fence investors are sitting on. Are you a physical stacker, a paper trader, or both?

When the silver price was basing for an extended period of time and below the primary silver miners’ breakeven average price per ounce due to cost-of-production factors, silver appeared to be a screaming buy on the fundamental and technical side of the equation. For those who stack physical silver and trade the paper markets, entry points are not necessarily simultaneous. Most folks generally hold physical silver with a much longer time horizon in mind vs. capturing low-risk, high-reward entries for paper profits in the equity markets. When an opportunity in any asset is approaching or revisiting a secular bull market, bottom picking and top picking are not what seasoned professionals do, as they’re more often than not looking for a low-risk, high-reward momo play (aka sweet spot). Consider the following quote by Charlie Munger. 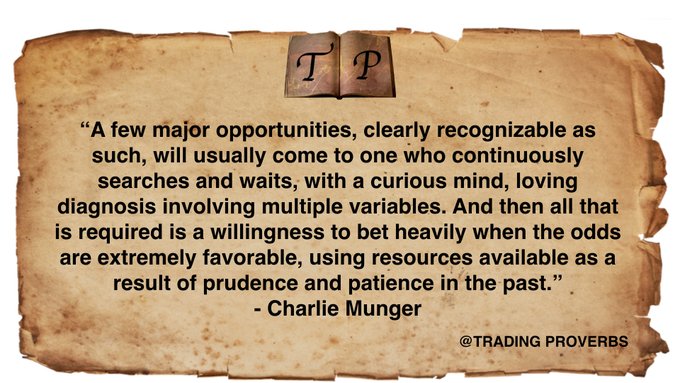 If you missed my recent analyses on gold’s price advance, I suggest you review “The Banking Scam and Gold’s Poker Face at $1,433,” published on Aug. 4, and “NIRP Supports Gold’s Explosive Rally with Ultra-Bears and Ghosts in the Asylum,” published on Aug. 15. To view a larger version of any chart, right-click on it and choose your “view image” option.

Here is the gold spot weekly chart as of Aug. 30, overlaid with the CFTC’s Commitments of Traders (CoT) report data from Aug. 27 and released on Aug. 30. The CoT is always delayed by one week. The Sep. 3 CoT data covering the previous week’s price action will be released on Friday, Sep. 6. 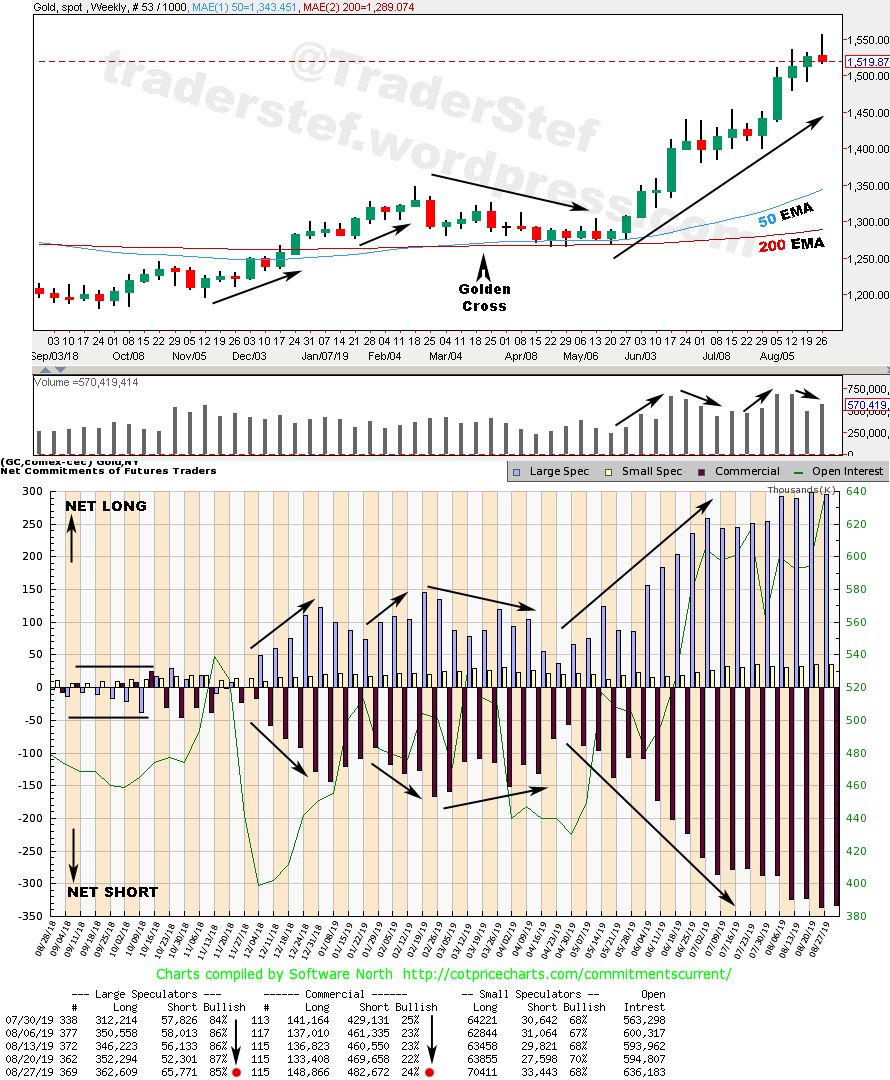 The purpose of the overlay is to help identify the near-term price trend based on positioning by the commercials (bullion banks) and large specs (hedge funds). Almost without exception, the commercial (bullion banks) traders build short positions during a rising price trend and large specs (hedge funds) add long positions to capture the momo play. When the price is approaching an inflection point, their positioning begins to flip. Zoom in to the bottom of the chart and note the Aug. 27 data points marked with red dots. I included the 50 & 200 Exponential Moving Averages (EMA) for reference.

Notice the flip in long vs. short positioning by the commercials and large specs, indicated by horizontal lines without arrows on the lower half of the chart. It is a rare occurrence that commercials go net long with the large specs net short, which telegraphed the potential for a significant reversal in price to the upside, as noted in “Price Derangement Syndrome Fuels Gold Pundit Insanity – Part 2, published on Mar. 12, 2019. 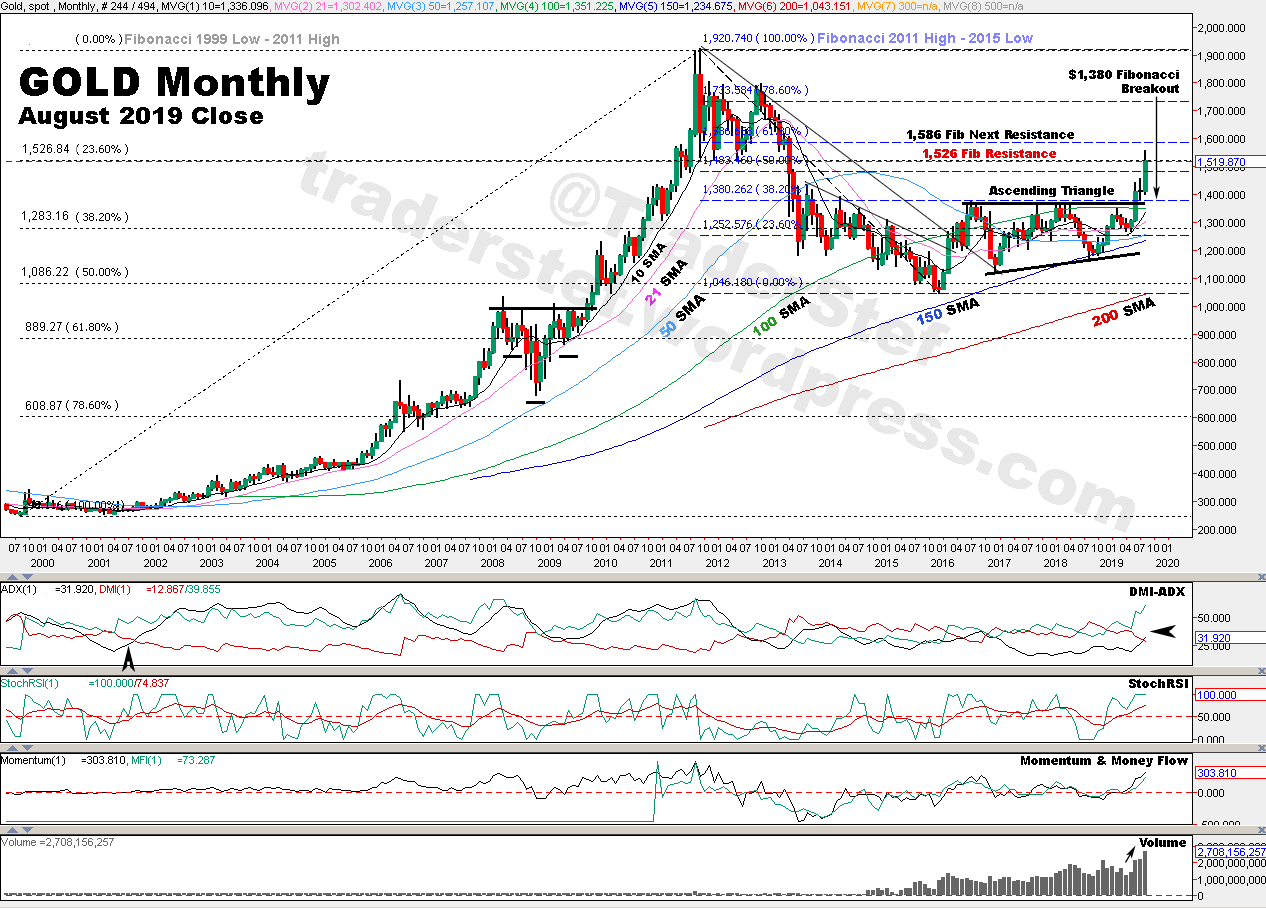 “The monthly highlights the continuation of gold’s upside move with a $135.53 gain in August with two weeks left. The $1,430 lateral resistance area from Aug. 2013 is likely history, and the $1,483 Fibonacci was taken out with conviction and the price easily advanced to a high of $1,535.05 on Aug. 13. Resistance is currently at the $1,526.85 Fibonacci level, where lows printed during 2011 and 2012 just prior to the 2013 plunge. The next target within striking distance is the $1,586.65 Fibonacci. All of the Simple Moving Averages (SMA) continue to realign into a bullish pattern, the DMI-ADX is setting up an Alligator Tongue momentum play, and we have a rising price and volume pattern. The only downside is the StochRSI, which is in overbought territory but can remain elevated for an extended period. The price is due for a breather and consolidation before decisively taking out $1,586.”

Overall, technicals on the monthly chart remain the same as noted in the Aug. 15 analysis. I have added the Momentum and Money Flow studies on the August close chart, and they continue to rise steadily. The monthly chart remains bullish long-term but is in the process of taking a breather and a consolidation as noted in the previous monthly analysis. The $38 pullback at the end of the week confirmed that analysis. 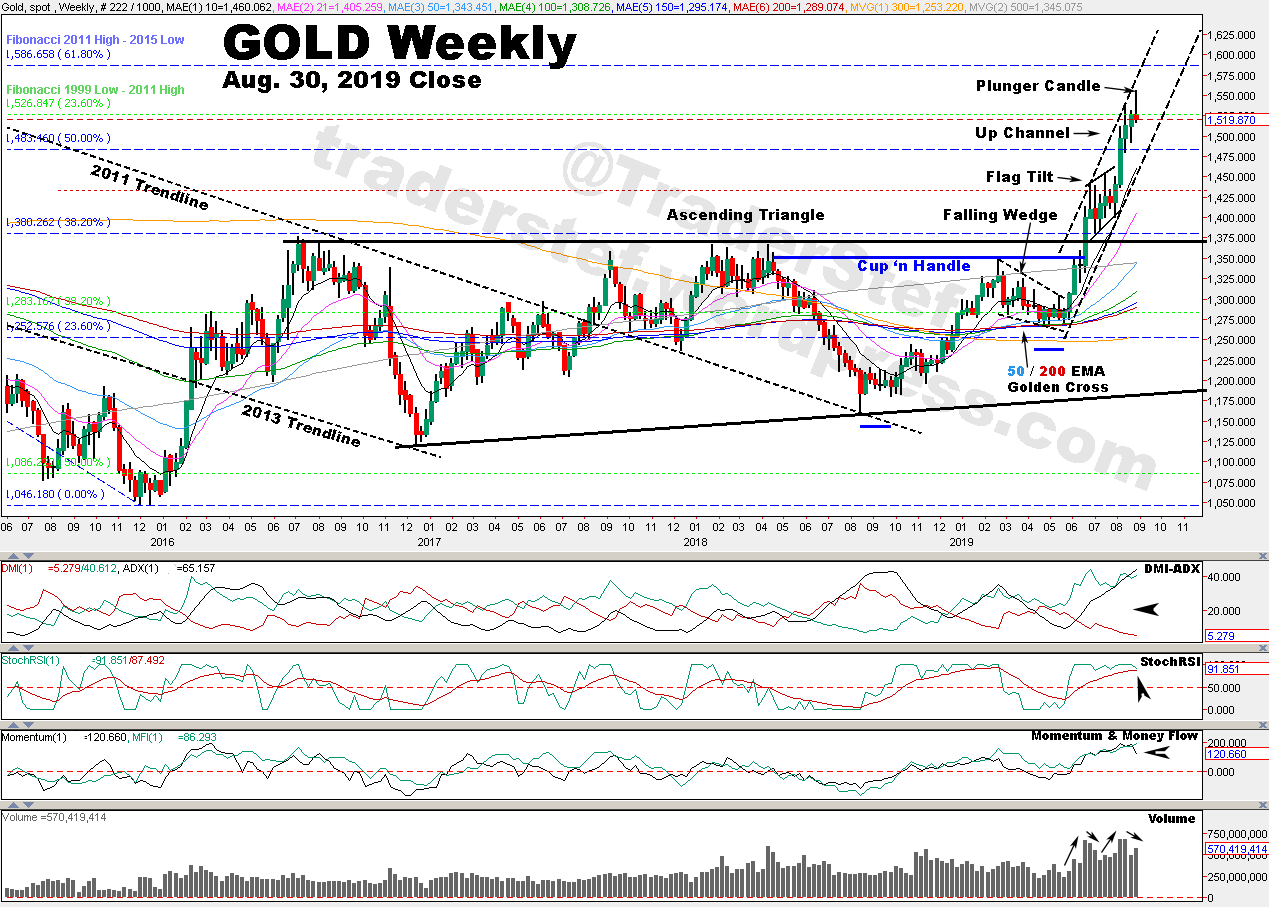 “The $1,380 Fibonacci and topside trendline of the Ascending Triangle confirmed as solid levels of support. The chart pattern currently dominating the price action is a bullish Flag Tilt. As noted in the Jun. 20 analyses, the $1,430 lateral resistance area from the Aug. 2013 high of $1,433.73 has been a challenge to breach. All of the Exponential Moving Averages (EMA) and Simple Moving Averages (SMA) are aligned with the stars, the DMI-ADX remains in a bullish stance, the StochRSI is in overbought territory but can remain there in the near-term, and Volume is steadily rising with an upward price consolidation. All the studies are indicative of a potential for additional price gains in the near-term.”

The pattern that has taken hold is an Up Channel with a bearish Plunger candlestick (aka Shooting Star) print for the last week of August. Whether the $38 breather is the beginning of a larger pullback before consolidation takes place will be determined by the September news cycle. I posted an hourly gold chart on Twitter on Aug. 29, that pointed out a fractal on the chart that implied a correction was in the making. 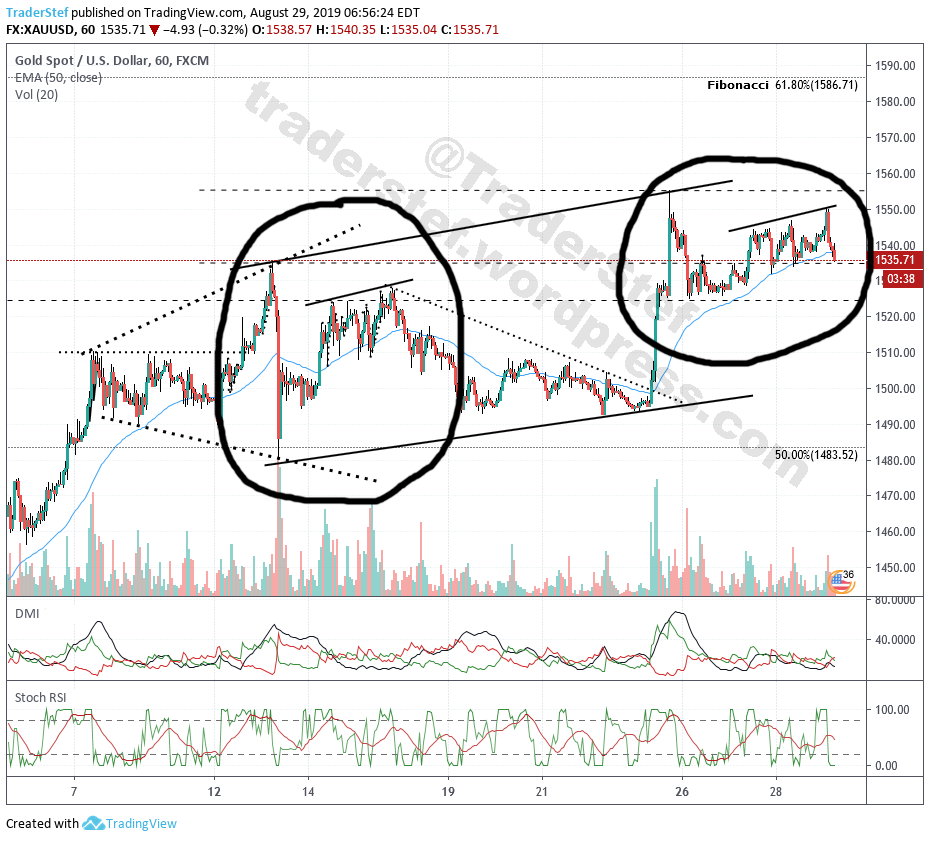 The price action made a stellar attempt at reaching the $1,586.65 Fibonacci, but no cigar. With the weekly close at $1,519, the $1,526 Fibonacci resistance is back in play. The ADX at 65 is approaching overbought territory, the StochRSI is threatening a break to the downside after bouncing along overbought territory since June, the Money Flow is rolling over, and the Volume printed lower than the peak in June for a second time. I remain bullish long-term as noted on the monthly analysis, but caution is warranted in the near-term until a price consolidation takes hold and a price pivot to the upside with conviction takes place.

Negative Interest Rates Are Extremely Toxic… “Jim Bianco, President of Bianco Research, cautions against evermore unconventional monetary policy interventions. He fears that the global slowdown is going to get worse and he spots opportunities in long-term bonds and gold.” – The Market, Aug. 28

Mark Mobius: Should Be Buying Gold on Any Level – Bloomberg, Aug. 20 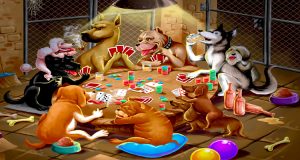