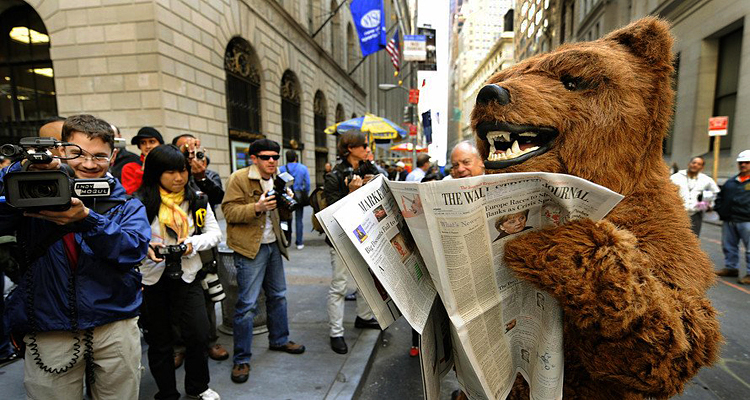 On Feb. 13, my gold and silver analyses included a recent interview from the financial sandbox that aired on Jan. 6 and featured Jeff Currie, global head of commodities research at Goldman Sachs Group Inc. His opening salvo pointed to stretched valuations in the equity market, a convexity in bonds at a high level alongside record dislocations and “structural deficits” in asset markets such as energy, metals, and agriculture despite tons of capital sloshing around that’s looking for somewhere to go. A “Russian invasion of Ukraine would only heighten the geopolitical premium in prices” and investment positions in real assets remain relatively low in financial markets. I suggest that you watch his interview if you missed it, as the world entered an uncharted state of war this week.

“Goldman Sachs advised their clientele in 2021 that the world is entering a new commodity supercycle and is the best place to invest in right now.”

Regarding the invasion of Ukraine, there is a long story that can be found in “Little Green Men and Metal Poised to Strike” Part 1, 2, 3, and 4 (Twitter thread). Since crossing into Ukraine from the north, south, and east yesterday evening, Moscow’s goal and point of view are clear.

The main roads out of Kyiv were massive parking lots with people fleeing west. 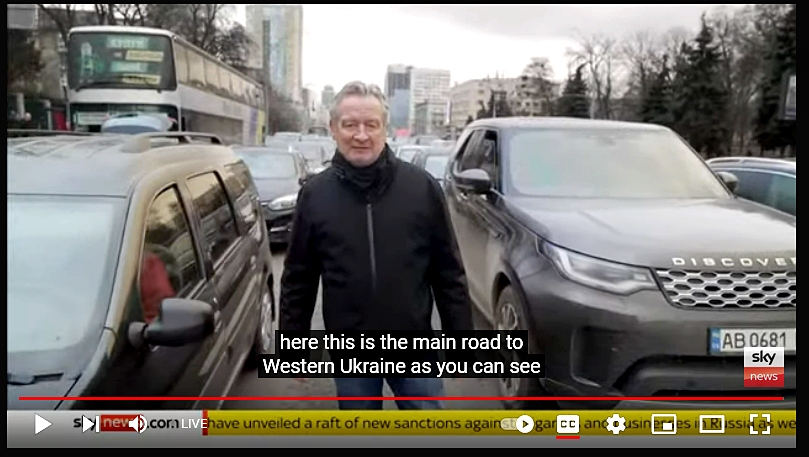 In early 2021, Currie pointed out that producers of almost every commodity were massively underinvested in new supply since the last commodity cycle topped out in mid-2008 and the recession followed the Great Financial Crisis. He also noted that the extremely accommodative monetary policy around the world, at the Fed, and combined with loose fiscal policies for infrastructure and expectations for a greener economy would stimulate commodity demand. The combination of supply chain issues and the eventual increase in demand would unleash the early phase of a new bull cycle.

As prices began to surge last year, so did interest on Wall Street. The annual Robin Hood investor conference that attracts hedge fund gurus like Paul Tudor Jones, Stanley Druckenmiller, and Ray Dalio discussed raw materials for the first time in about five years. Druckenmiller is one of many that are betting big on inflation in the near term. And for the first time since before the Great Financial Crisis, a boom in commodities means that central banks are having issues with inflation. Politicos are also unhappy about rising costs for commodities because it makes it more expensive for them to push the “Build Back Better” or “Green New Deal” ideas.

The most critical commodity on the list is oil because the global economy depends on energy to keep the wheels of business spinning. Oil continues to rally higher as the world emerges from pandemic lockdowns and demand is increases, but the OPEC+ alliance is keeping supply constrained to preserve their high profits after Biden wrecked U.S. energy independence. Trafigura Group is the world’s second-largest independent oil trading firm. They posted over $2 billion in net profit in six months ending in 1Q21, which is almost as much as it made in its best full year. Cargill Inc. is the world’s largest trader of agricultural commodities, which made more profits in nine months than any full year in its history when net income soared beyond $4 billion. There are plenty of opportunities out there if you take the time to find them.

Supercycles are typically associated with a period of higher-than-normal demand that miners, oil companies, and farmers struggle to match. That sparks a rally that goes well beyond a normal business cycle. Prior to China joining the international trade party, there were three distinct commodity supercycles that were caused by a transformational socioeconomic event. The first is the U.S. industrial revolution during the early 1900s, the second was the global military industrial complex rearmed through the 1930s, and the last was the reconstruction of Japan and Europe through the 1950s and 1960s after World War II.

Respected analysts, investors, and a cross-section of price charts indicate that the world is in the early stage of a new commodity supercycle. Supply is having a difficult time keeping up with demand, bottlenecks in global supply chains are taking much longer than expected to return to some semblance of normalcy, and many industries are having difficulties with keeping raw material operations running, smelters melting, and farms and slaughterhouses are struggling to stay afloat with higher operational costs and supply chain constraints. As Currie pointed out, there’s a structural supply constraint, and higher prices are not creating higher production that usually brings markets back into balance.

Supply Chain Crisis Will Not End Anytime Soon – Part 3… “The consequences from a multitude of geopolitical hotspots and the political circus in the U.S. are unknown at this time. No matter what you read or hear, it is prudent to keep your pantry stocked with bullets, beans, and bullion until this global mess resolves itself at some point in the future.” – TraderStef, Jan. 8

For the commodity bulls, like hedge fund manager Doug King, it’s time to double down as he sees oil rallying to $200 per barrel in the next five years. There will be blips along the way, and he does not see the intermittent rallies as transitory spikes.

Commodity Trader King Eyes $200 Oil… “London-based Doug King, 55, is among a cadre of hedge fund managers, including Pierre Andurand, who made huge profits from commodities last year amid a global economic recovery from the coronavirus pandemic and supply disruptions… The Bloomberg Commodity Spot Index, which tracks energy, metals and crop futures, jumped 27% in 2021, the most in over a decade… ‘We believe in structural supply-side commodity inflation that most will not have ever seen — the highest since the 1970s,’ he said in an interview. ‘Only OPEC will react to price metrics and they are undershooting every month.’” – Rigzone, Jan. 13

Here are a few of the commodity reports and technical analyses I’ve written since 2019. There’s still room to find a position and grab a bull by the horns.

I’m working on a watchlist of gold and silver mining stocks for 2022 that will be published soon. The miners have invested in infrastructure, reduced costs, ventured into mergers and acquisitions, and generated substantial free cash flow relative to the past. Access to capital in markets today is constrained in the unloved commodity sector. Little money is given for exploration, but some of the best mining companies are ahead of the curve and ready to prosper in a new supercycle.

“Gold at 1,900 and precious metals miners have never been so cheap. Highest median FCF yield in the last 26 years. Now on track for 6 straight profitable quarters for the first time in history!” – Otavio (Tavi) Costa, May 25, 2021 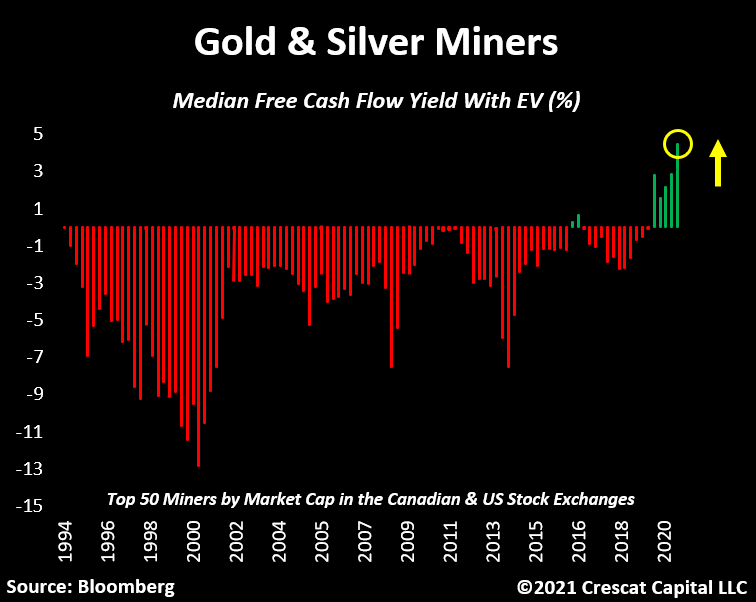 The most important question facing markets next week is the impact on energy prices and business sectors due to the invasion of Ukraine by Russia and subsequent sanctions. Beyond that is what will be the response from the Fed and other central banks. Uncertainty usually puts the bankers on pause, and the current geopolitical and socioeconomic situation is uncharted territory.

U.S. Banks Are Prepared for Russia Sanctions, but Concerns Grow About Potential Hacks… “Several major financial institutions declined to comment publicly on their plans in light of sanctions, but retaliatory cyberattacks is a major worry… On Thursday, the Treasury Department issued a directive banning U.S. financial institutions from opening or maintaining correspondent banking accounts for Russia’s biggest bank, Sberbank, and its subsidiaries, effectively cutting them off from the U.S. financial system starting on March 26.” – WSJ, Feb. 24

Percentage of natural gas imported by European nations from Russia: 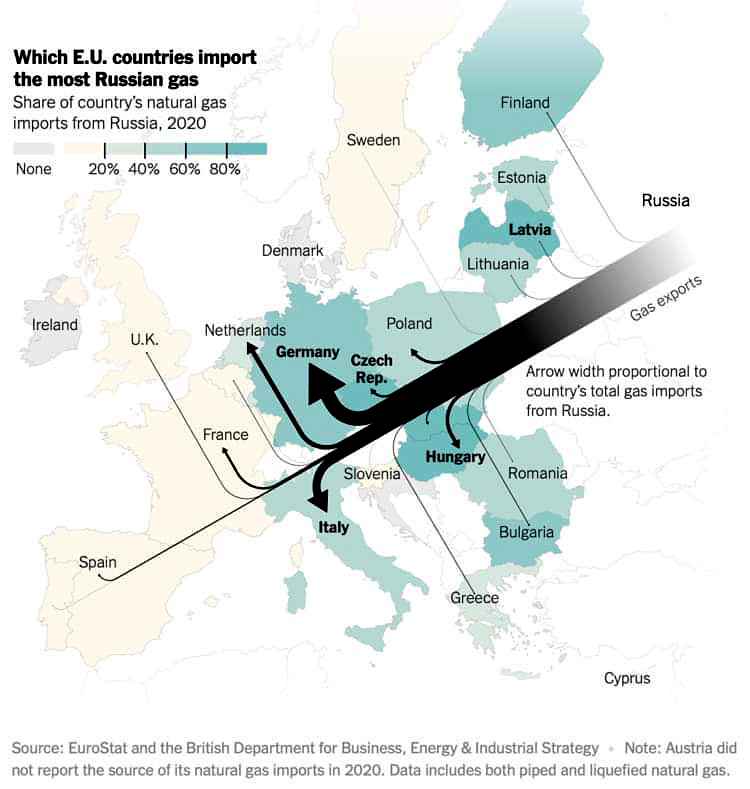 We’ll know when we get there. In the meantime, here is a commodity index chart to consider that provides an overview of the raw materials forest. It looks like some constituents are due for a pause and consolidation before trending higher. The buy volume pouring in is stunning relative to the last two decades. A rising price with rising buy volume is building a bullish base that’s indicative of an accumulation phase and higher price points over the horizon.

“The Fund is designed for investors who want a cost-effective and convenient way to invest in commodity futures. The Index is a rules-based index composed of futures contracts on 14 of the most heavily traded and important physical commodities in the world. The Fund and the Index are rebalanced and reconstituted annually in November.” 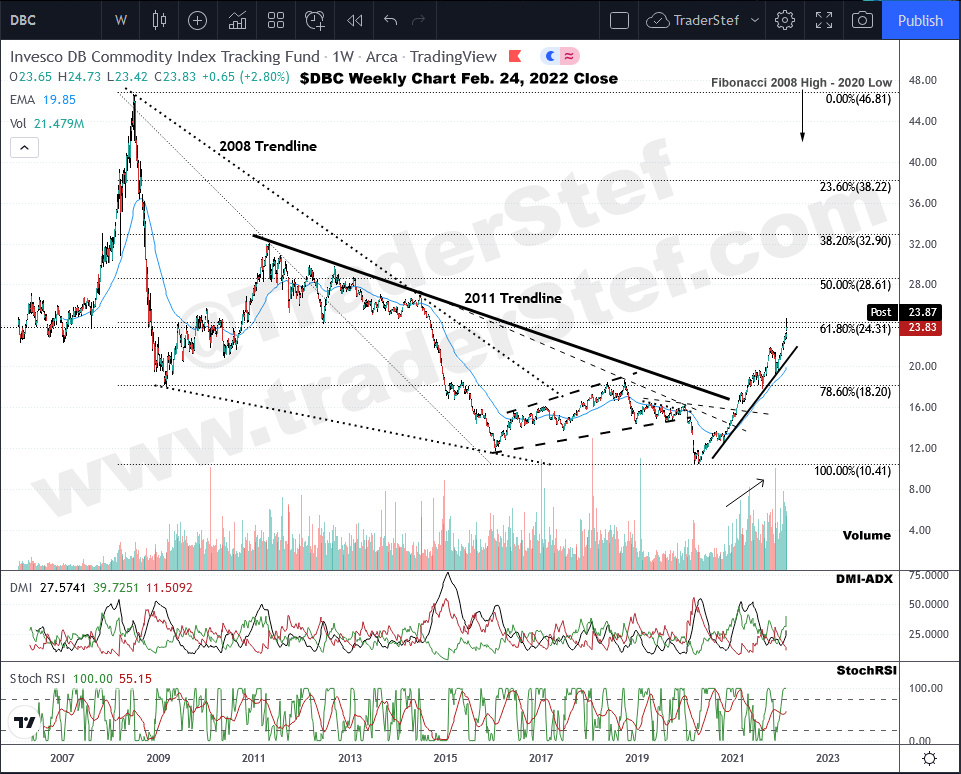 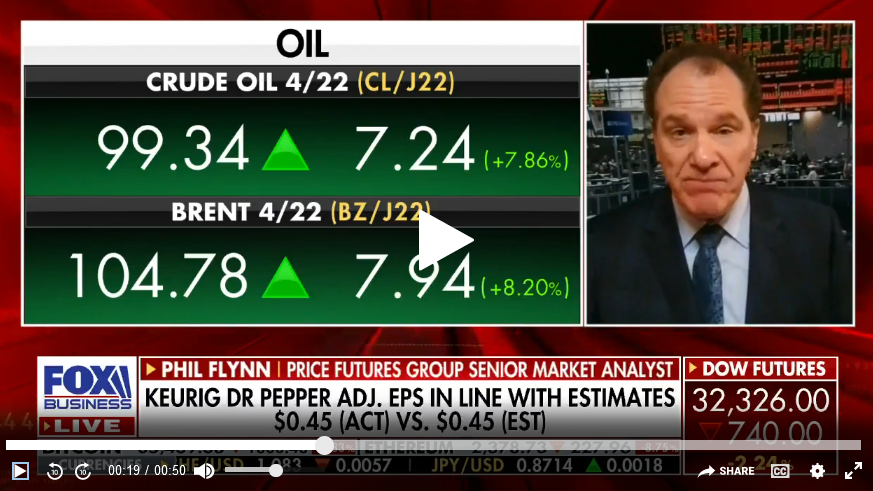 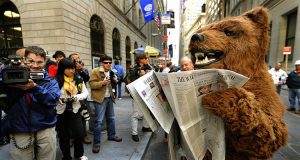