A boatload of investors and traders have been patiently watching that 2011 topside trendline on gold.  Over the course of the last month, that resistance was taken out in both volume and price.  A potential big move in precious metals is afoot, and there’s no nest on this ship to see any dangers that may lie ahead.  With so much documented manipulation occurring, it’s understandable why many may be weary of getting their feet wet.  Far too often, when the price has reached an important technical crossroad in the past, the cartel has appeared and your belly starts to flip at the sight of a “Mini-Puke.”

So what’s a pirate to do?  Wait for the next pullback?  Maybe, maybe not, because there will always be chops.  Everybody wants a bottom for entry or a top for profit.  The reality is that few actually accomplish the timing of such a feat.  The goal is to be positioned and accumulate.  One effective method to accomplish that while in a low-risk trade environment is to ladder positions.  I used the same strategy when CDs were actually worth the interest rate offered from 2004-2007.  Instead of putting all your eggs in one basket, you invest in multiple CDs over a period of many months or years.  By doing that, you’re not beholden to a single rollover decision and can take advantage of a higher yield along the way.  How many positions and how long they take to mature are dependent upon the size of your piggy bank and current market conditions.  The same strategy is used by seasoned traders. Whether scalping, swinging, or long-term positioning, the result is the same… reinvest profits at a lower price and ride the bull.  Just don’t be a pig or allow your emotions to rule, and always expect volatility.

As gold and silver approach important lateral resistance and Fibonacci price points in the near future, laddered positions can be added or taken away as conditions warrant.  A common strategy is one taken in thirds.  As the bull runs wild and hot money dives in for momo moves, plan to exit 2/3 on strength for profit, then reinvest on the pullbacks, all the while keeping your foot in the door with an original core position.

Speaking of fear and volatility, as I’m typing this, the following headline flashed across my screen… 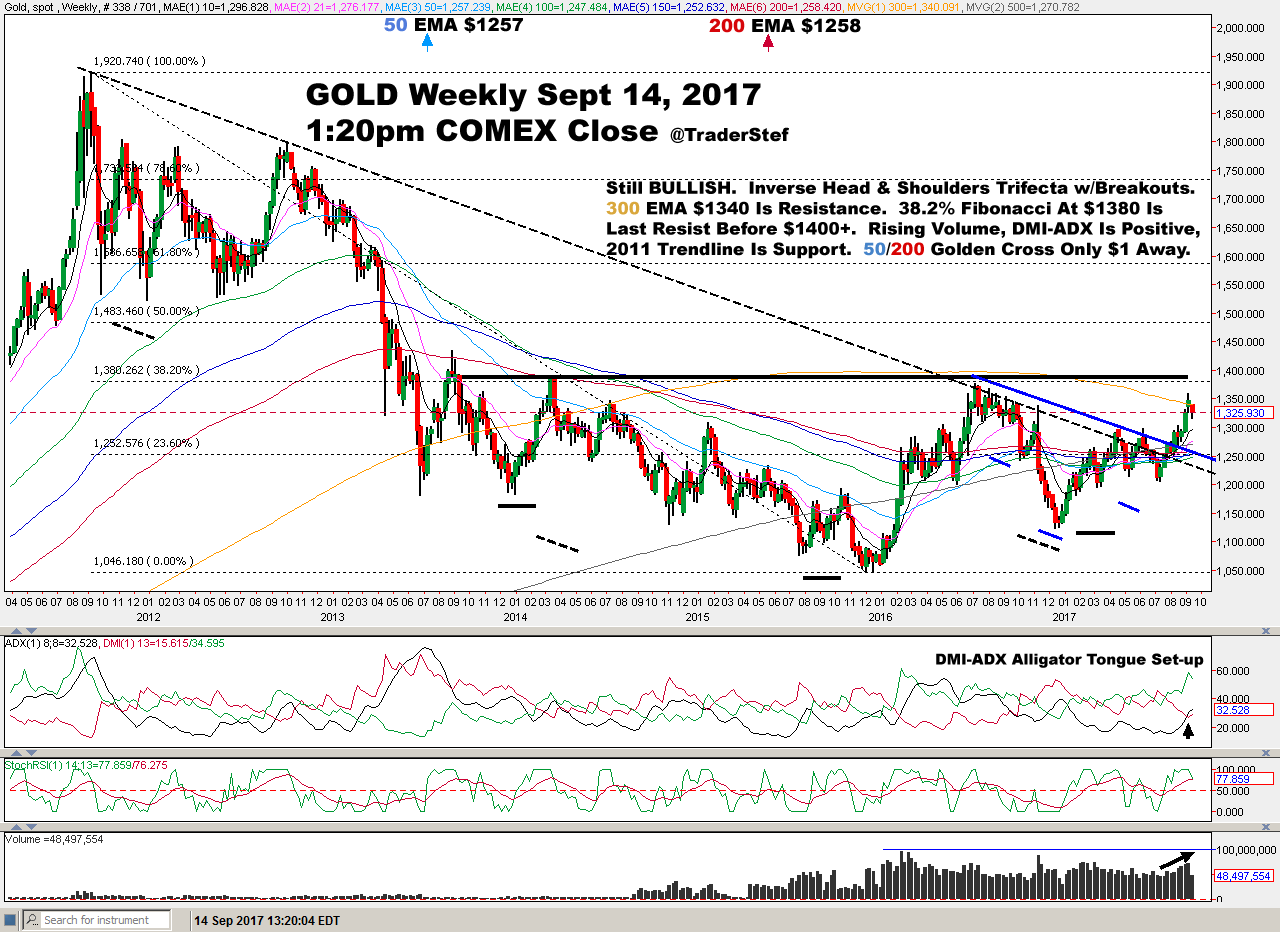 BULLISH: the gold weekly chart has successfully broken out of two in a trifecta of Inverse Head & Shoulders patterns. The last, and likely the most influential on price, has its Neckline at a confluence of the 38.2% Fibonacci $1380 and a 50/200 EMA Golden Cross that is only $1 away.  A Golden Cross on daily charts is great, but on the weekly, deeper pockets jump in for much longer sweet-spot price action to the upside.  I cannot stress enough how important this crossroad is.  In the meantime, the overhead 300 SMA is acting as resistance before the price can decisively take out that Neckline & Fibonacci level.  The DMI-ADX set-up is now entering a positive Alligator Tongue pattern, along with rising volumes for the last two months.  One potential negative is that the StochRSI is rolling over but has not broken down, which may indicate that a period of consolidation lies ahead before the price can attempt a decisive breakout of the confluence discussed above.

My last thought on gold is what Bill King discussed in a September 13th interview at the 11:54 timestamp.  Price action has morphed into the “accumulation” phase. 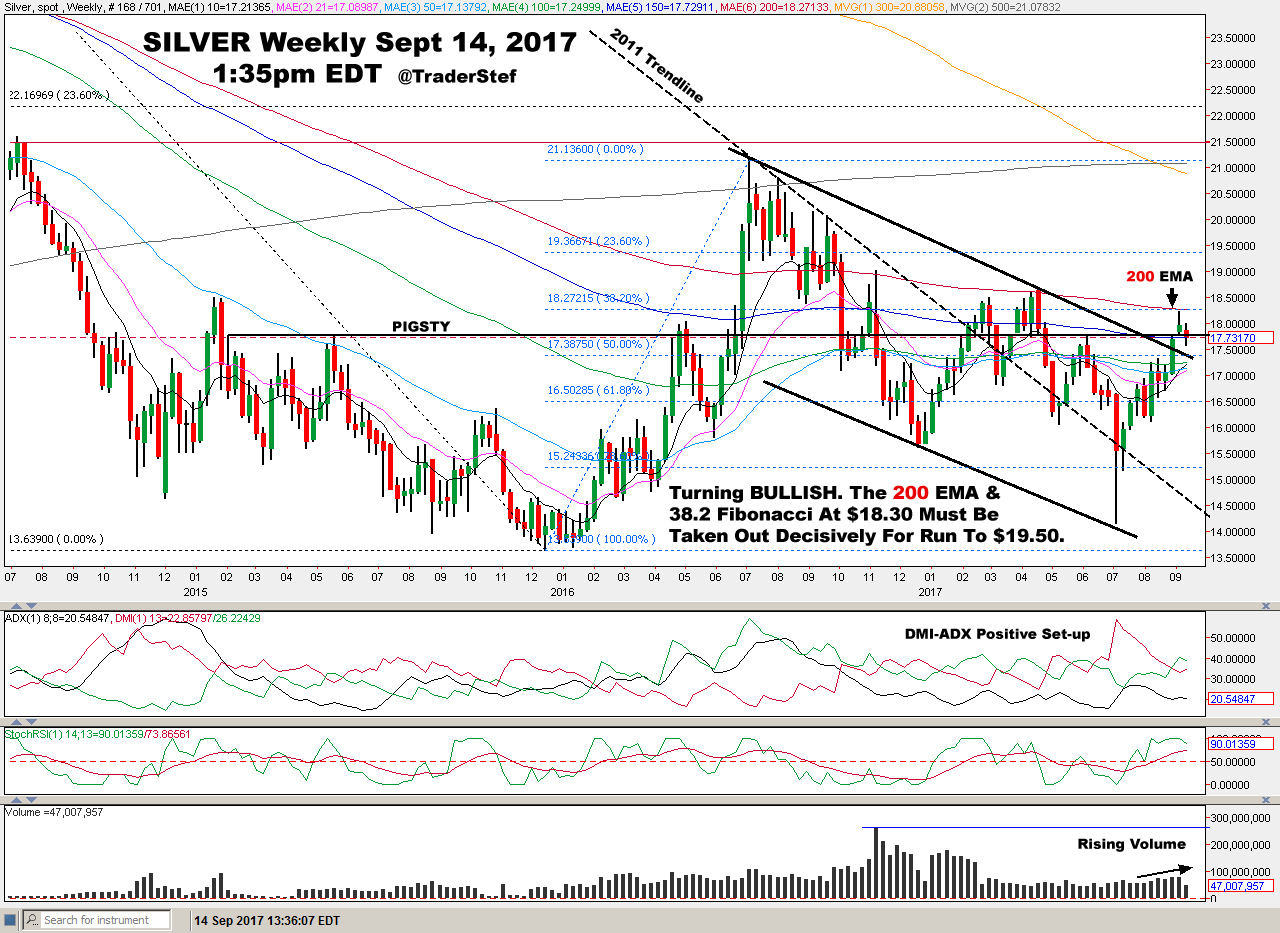 Turning BULLISH: silver will follow along with whatever direction gold takes, but the percentage gain will be much larger.  The 200 EMA is currently seeing resistance, and the buy volume is stealthily rising.  As noted in previous posts, the ultimate number to watch is $21.50. 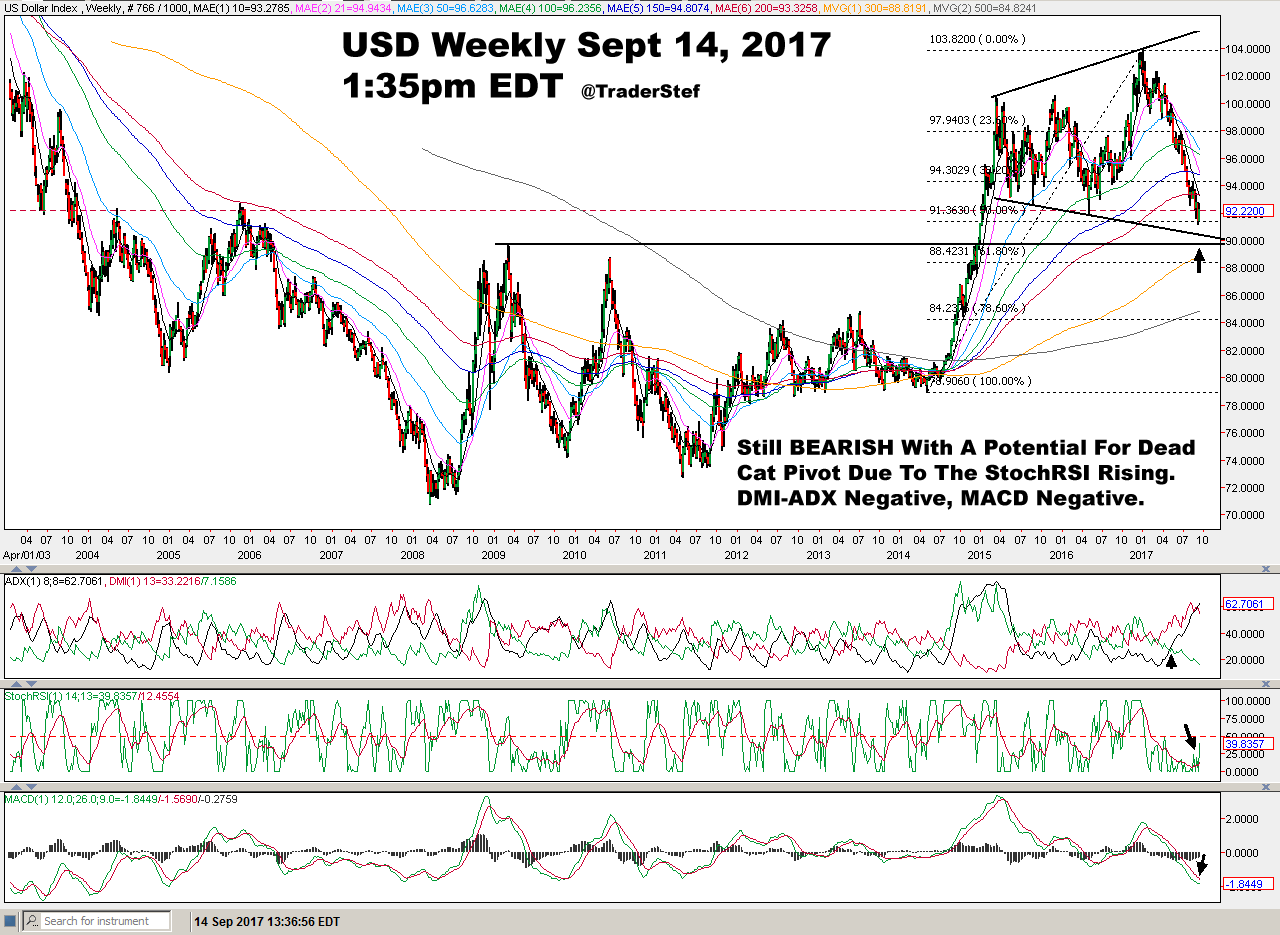 Still BEARISH: as noted in my August 28th post, $91 to 91.36 for the USD appeared to be baked in the cake.  Last week’s low was $91.13.  There’s still room to fall for the dollar after a dead cat pivot.  The lower trendline of the Broadening Top (aka a Megaphone pattern) is a likely target.  If that price level is taken out decisively to the downside, watch out below, savvies.