“Black” placed before a day of the week formerly meant something terrible happened that day in financial markets and elsewhere or denoted some kind of natural catastrophe, like the Black Death. That was the case until the Internet was born and U.S. retail adopted “Black Friday” as a day to go shopping and bring retail balance sheets into black ink and out of red ink.  Before we get to Black Friday’s origin, let’s review a full week of doom.

Black Monday… “October 19, 1987, when stock markets around the world crashed, shedding a huge value in a very short time. The crash began in Hong Kong and spread west to Europe, hitting the United States after other markets had already declined by a significant margin. The Dow Jones Industrial Average (DJIA) fell exactly 508 points to 1,738.74 (22.61%).” – Wikipedia 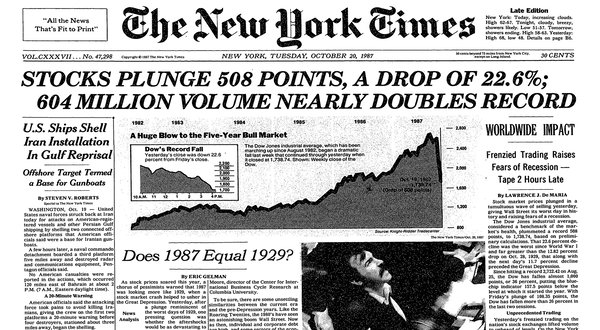 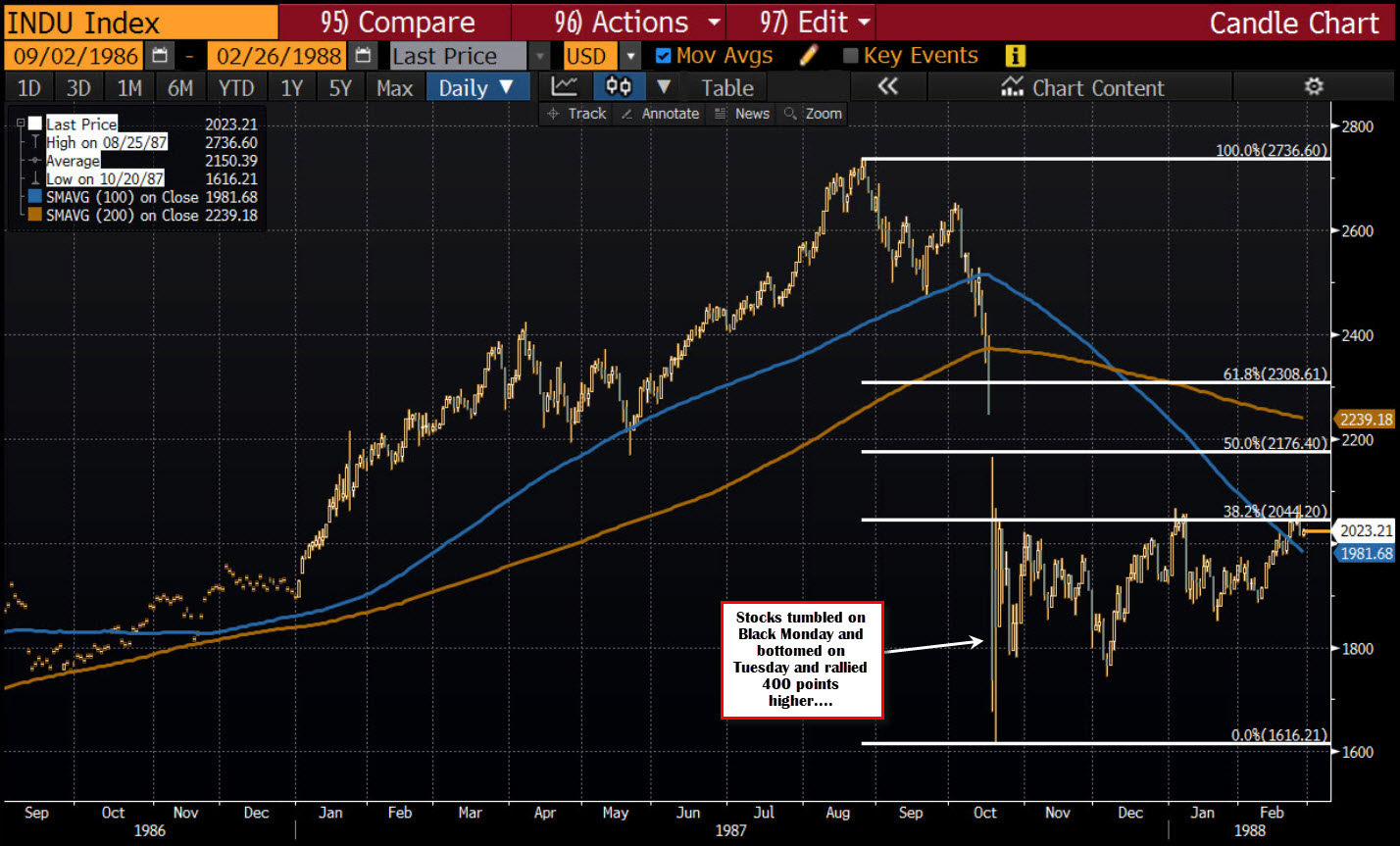 Black Tuesday… “October 29, 1929 was the fourth and last day of the stock market crash of 1929.  Investors traded a record 16.4 million shares. They lost $14 billion on the New York Stock Exchange NYSE, worth $199 billion in 2017 dollars.  During the four days of the crash, the Dow dropped 25 percent and investors lost $30 billion. That was ten times more than the 1929 federal budget. It was more than the United States had spent on World War I.” – The Balance

Black Wednesday… “September 16, 1992, the day when the British government was forced to withdraw the pound from the European Exchange Rate Mechanism (ERM).  The UK Treasury estimated that the loss from that day was around £3.14 billion. It is also known as the day that George Soros broke the Bank of England. It has been reported that he made a $1 billion profit that day, which cemented his reputation as one of the greatest forex traders who has ever lived.” – Investopedia

Black Thursday… “October 24, 1929 was the first day of the stock market crash of 1929, kicking off the Great Depression. Even before the New York Stock Exchange opened, investors were panicky. The Dow Jones Industrial Average had fallen 4.6 percent the day before. The Washington Post headline screamed, ‘Huge Selling Wave Creates Near-Panic as Stocks Collapse.’ The market opened at 305.85.  It immediately fell 11 percent during intra-day trading. That’s one percent more than a stock market correction. That worried Wall Street bankers. The stock market had already fallen almost 20 percent since its record close of 381.2 on September 3, 1929. Even worse, trading volume was 12.9 million shares, or three times the normal amount. The three leading banks at that time were Morgan Bank, Chase National Bank and National City Bank of New York. They bought stocks to restore confidence in the markets. The intervention seemed to work. The Dow recovered a bit, closing 2 percent down, at 299.47. (Source: ‘1929 Crash,’ San Francisco University.)  On Friday, the Dow closed higher, at 301.22. But on Black Monday, it fell in light trading, to 260.64. That triggered an all-out panic on Black Tuesday. By the end of the day, the Dow had fallen to 230.07, a 12 percent loss.  After the crash, the Dow continued sliding for three more years.  It finally bottomed on July 8, 1932, closing at 41.22. All told, it lost almost 90 percent of its value since its high on September 3, 1929. In fact, it didn’t reach that high again for 25 years, until November 23, 1954.” The Balance 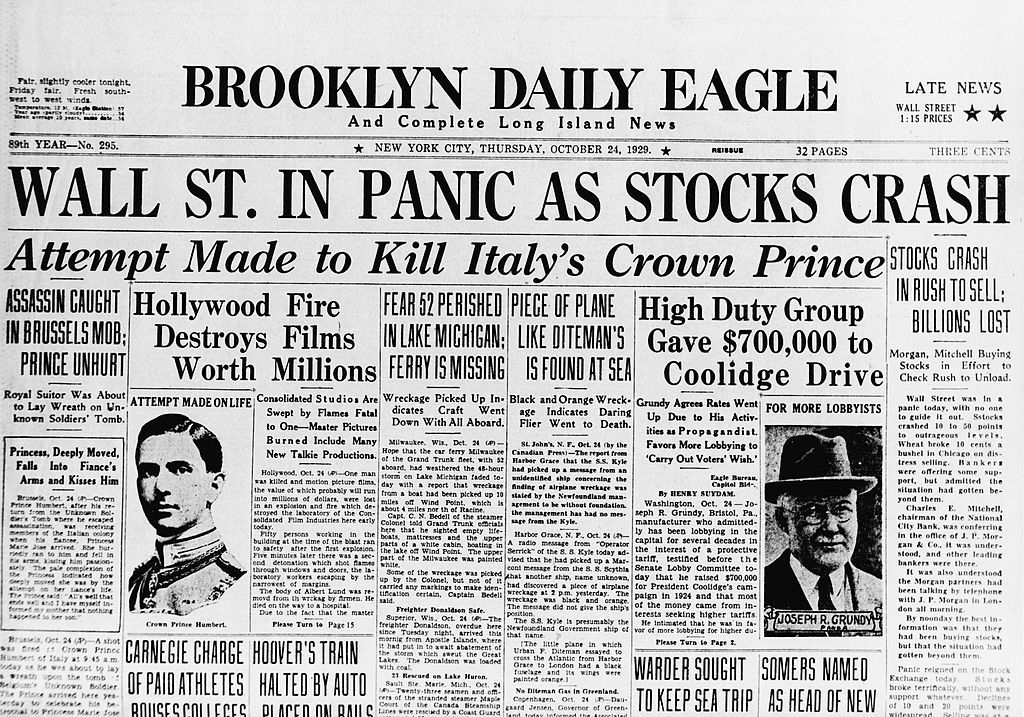 Black Saturday… “The Black Saturday fires were Australia’s most devastating bush fires. They occurred in the state of Victoria on Saturday, 7 February 2009. This day coincided with the worst bushfire weather conditions ever recorded. Extreme heat, high winds, low humidity, and severe drought were all factors in fanning the flames on that tragic day. These fires also caused the greatest loss of life for a bush fire and wiped whole towns off the map. On a global scale, this was the world’s worst fire event. It was the equivalent of 400 Hiroshima atom bombs going off.” – BlackSaturdayFires

Black Friday in the U.S. today…

Black Friday 2017 has already arrived!  It has become Black November.  75% of consumers between the ages of 13 and 35 are hardcore bargain hunters who will continue shopping for several weeks into the holiday season.

What’s the Real History of Black Friday Shopping?… “The true story behind Black Friday, however, is not as sunny as retailers might have you believe. Back in the 1950s, police in the city of Philadelphia used the term to describe the chaos that ensued on the day after Thanksgiving, when hordes of suburban shoppers and tourists flooded into the city in advance of the big Army-Navy football game held on that Saturday every year. Not only would Philly cops not be able to take the day off, but they would have to work extra-long shifts dealing with the additional crowds and traffic. Shoplifters would also take advantage of the bedlam in stores to make off with merchandise, adding to the law enforcement headache.

By 1961, ‘Black Friday’ had caught on in Philadelphia, to the extent that the city’s merchants and boosters tried unsuccessfully to change it to ‘Big Friday’ in order to remove the negative connotations. The term didn’t spread to the rest of the country until much later, however, and as recently as 1985 it wasn’t in common use nationwide. Sometime in the late 1980s, however, retailers found a way to reinvent Black Friday and turn it into something that reflected positively, rather than negatively, on them and their customers. The result was the ‘red to black’ concept of the holiday mentioned earlier, and the notion that the day after Thanksgiving marked the occasion when America’s stores finally turned a profit. (In fact, stores traditionally see bigger sales on the Saturday before Christmas.)” – History Channel

Remember Wilma and Betty from the Flintstones?  Very prophetic, fuggetaboutit…

So here we are in late October of 2017, and the push for sales has already begun.  Expect more sheeple insanity this year, spending money they do not have on things they may not need.  The latest and greatest electronics are the largest percentage of purchases that bargain hunters seek.

Enough about consumer idiocy.  So, when did BLACK FRIDAY originate?  September 24th, 1869 was one of the greatest stock market crashes in American history.  After a period of rampant speculation, the price of gold plummeted and the market crashed.  For some historical context as to what was going on in politics and monetary policy at the time…

“The Civil War had recently ended, and the Reconstruction Era was underway, as Ulysses S. Grant, renowned war hero, became the 18th President of the United States. He inherited a deeply divided nation, with large federal debt. In his inaugural address in January 1869, Grant demonstrated his commitment to gold-backed currency by insisting on repaying the war bond debt from the Civil War with gold. Greenbacks (paper dollars), which had been introduced to fund the Union march to war in 1961, represented the first issue of a federal paper currency since the collapse of the Continental Currency of the late 18th century. These notes, which were originally intended to be temporary and to be recalled following the war, had more than $450 million worth in circulation. Due to hard times of 1867, particularly by western farmers, demands were made for an inflated currency through the creation of more greenbacks. A compromise was finally reached in 1869, whereby greenbacks to the amount of $356 million were left in circulation. Grant tried to improve the economy by reducing the supply of greenbacks, or paper dollars by using gold to buy dollars from citizens at a discount and replacing them with currency backed by gold. This effectively set the value of gold: when the government sold its supply, the price went down; when it didn’t, the price would go up.” – Golden State Mint

“Since Lincoln had introduced the fiat ‘greenback’ paper dollar and stopped the redemption of paper money for equal amounts of gold money in 1862, the greenback had traded at a discount to U.S. tender gold coins. Instead of being traded in ‘dollars per ounce’, since the U.S. was on the gold standard, gold was traded on the New York Gold Exchange as ‘the amount of paper dollars to buy $100 in gold dollars’. During the height of the war in 1863, with a Union victory uncertain, it took $250 in greenbacks to buy $100 in gold coins. In 1869, when Fisk and Gould started their scheme, it took around $130 in greenbacks to buy five double eagle $20 gold coins. This works out to about $26.87/oz.” – GainesvilleCoins News

This is where these two geniuses stepped into the picture. 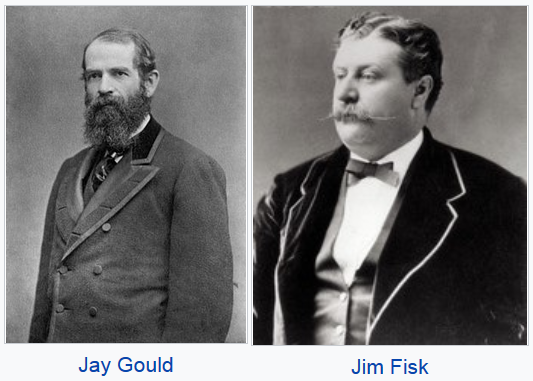 “The two men, president and vice president of the Erie Railroad respectively, where known, among a slew of other misdeeds, for having issued fraudulent stocks, bribing politicians and judges… Beginning in early 1869, Gould & Fisk, began an ambitious campaign to conquer the gold market. Gould wagered that, because there was only around $20 million of gold in circulation at a given time, a speculator could potentially buy large portions of gold, and corner the market. From there, the price of gold could be driven up, and then sold for a hefty profit. Grant could simply order the Treasury to sell off large amounts of gold to drive prices back down. For this ambitious gold scheme to work, Gould needed to manipulate the President of the United States.  Abel Rathbone Corbin became the perfect partner-in-crime; a former Washington bureaucratic and married to Grant’s sister, Virginia. In the spring of 1869, Corbin was befriended by Gould, and persuaded to help. $1.5 million in gold made its way into an account with Corbin’s name, and the conspiracy began. Corbin recruited Daniel Butterfield, who he helped install as the U.S sub-treasurer in New York. Butterfield was responsible for handling the government’s gold sales, and he agreed to give Gould, Fisk, and Corbin information of when the government was going to sell gold. Butterfield was given a $1.5 million stake in the scheme, and a $10,000 loan. The players were in place.” – Golden State Mint

Gould and Fisk began spreading rumors that the U.S. Government was refusing to sell any of its gold, which, in turn, led to huge demand, driving up the price. On September 23rd, the partners in crime decided to drive up the cost of gold to $150/oz., then sell their shares while any bag holders were eager to keep on buying. When trading opened at 10am on September 24th, the price was at $150/oz. and going higher.  Large crowds were forming outside the NYSE gold room. The National Guard was called in order to keep the peace outside.  When the price ran up to the $160+ range, brokers were buying large amounts of gold on credit. At 1 p.m., gold was at $164. 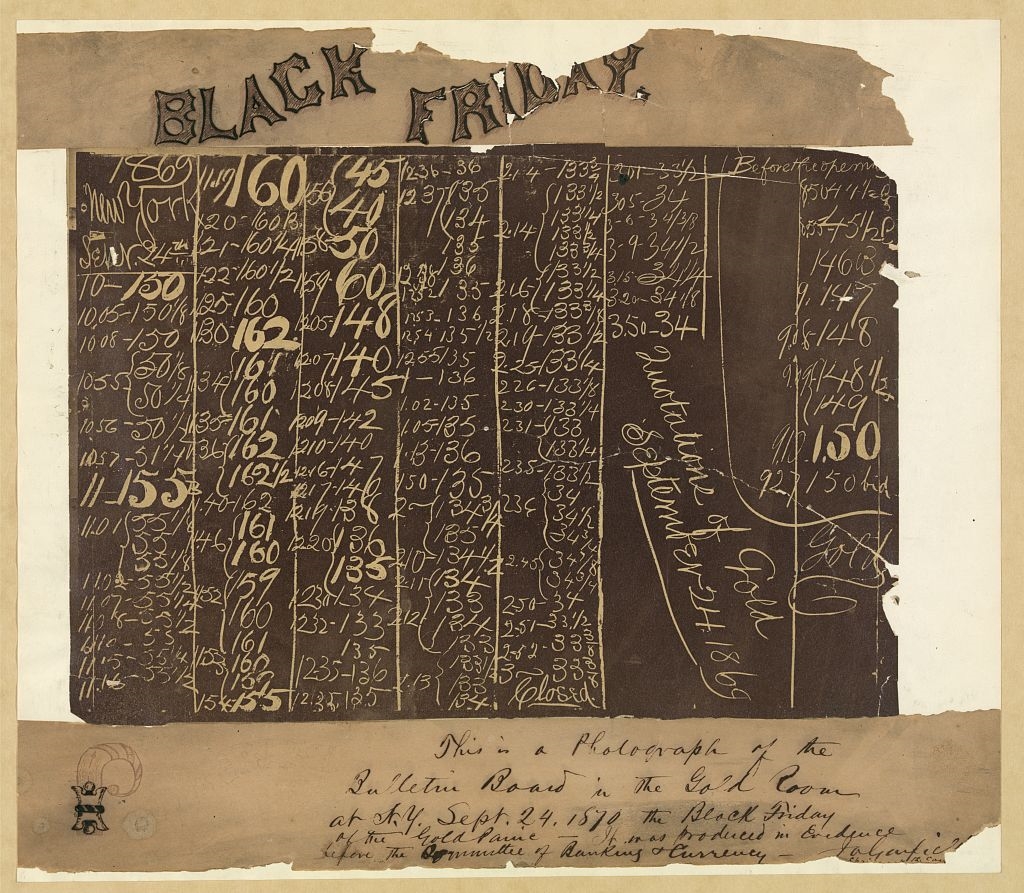 President Grant finally agreed to prevent a national collapse by selling some gold.  Treasury Secretary George Boutwell announced he would begin selling government gold on September 25th, which caused a price crash to $132.  The result… mass bankruptcies, mostly due to all the credit-margin issued to the bag holders.  Then, the stock market crashed.  Within a half hour, gold was back at the $130 level, where Gould and Fisk hatched their plan and bought months beforehand.  Hundreds of brokerages on Wall Street and across the U.S. were ruined.  Stock brokers were committing suicide into the evening of September 25th.  The newspapers of the day coined the story… Black Friday.

A caricature of financier Jay Gould, left, who attempts to corner the gold market, represented by bulls and bears in a cage. 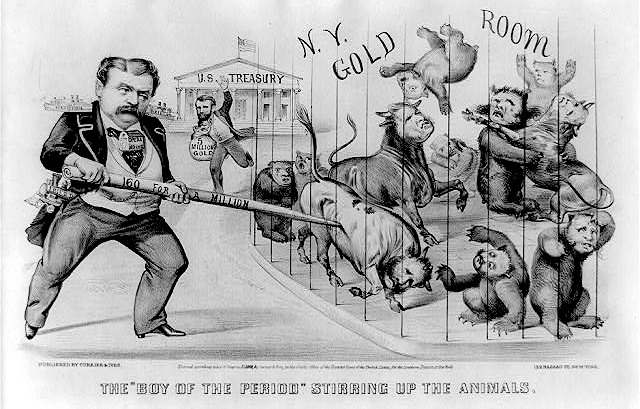 So there you have it.  Some things never change, like greed, and trading based on emotions, rather than fundamental facts.