If you weren’t cultivated to know that the value of real money is dictated by intrinsic value and you had a penchant for gambling, crypto’s inherent fugazzi nature may have suckered you along with likeminded and hopeful get-rich-quick investors into behavior that trashes rational thought, due diligence, and risk management. It more often than not manifests a herd mentality that’s awash in a flagrant disregard for counterparty risk. Anyone that has followed my writing or analyses on Bitcoin is aware that I have no bones to pick with speculation in any investment class as long as you implement fusion analysis for trading and are keenly aware of the risks. Although, when the aforementioned principles are ignored while investing capital with a dash of greed wrapped in altruism or emotion, a rock-bottom experience typically results in financial ruin before coming to grips with the periodic table vs. paper promises and cloud-based fakery.

“The FTX collapse may turn out to be the largest single day loss of assets in the history of money. The story of the FTX implosion is bigger than the global recession it may cause. Complete and utter corruption of people who run our country.”

There is a much larger picture to consider about the FTX scandal than Sam Bankman-Fried (his real name) and Queen Caroline’s elite connections that will dominate media headlines and be paraded on Capitol Hill in front of the House Financial Services Committee next month. An innumerable list of retail investors, wealthy promoters, and invested companies that took the bait hook, line, and sinker will severely impact everyone connected to them. Jim Rickards’ analogy of an “avalanche and the snowflake” juxtaposed against the FTX collapse in his recent article is the likely destination for the clown show full of fake charity nerds.

Avalanche!… “The FTX collapse has the potential to spin out of control and affect all capital markets in the same manner as the Mexican collapse in 1994, the Russia-LTCM collapse in 1998 and the Lehman Bros. bankruptcy in 2008. Think that’s an exaggeration? It’s not.” – Jim Rickards, Nov. 15

FTX says it could have over 1 million creditors in new bankruptcy filing… “Beleaguered cryptocurrency exchange FTX may have more than 1 million creditors, according to a new bankruptcy filing, hinting at the huge impact of its collapse on crypto traders. Last week, when it filed for Chapter 11 bankruptcy protection, FTX indicated that it had more than 100,000 creditors with claims in the case. But in an updated filing Tuesday, lawyers for the company said: ‘In fact, there could be more than one million creditors in these Chapter 11 Cases…’ Before its collapse, FTX offered amateur and professional traders spot crypto investing as well as more complex derivatives trades. At its peak, the platform was valued by investors at $32 billion and had more than 1 million users. The company’s failure has had a chilling effect on the industry, with investors selling their positions and moving funds off exchanges.” – CNBC, Nov. 15

Meanwhile, cryptophants are suddenly whining about how the lack of regulation is responsible for the demise of FTX. Let me get this straight: the same folks who promoted crypto back in the day as a decentralized safe haven from Big Brother are now blaming a lack of government oversight and regulation for losing their shirts in crypto? I digress.

So, what does the world of crypto have to do with a central bank digital currency (CBDC)? The cryptocurrency herd did all the groundwork for the powers that be (TPTB) by developing blockchain technology and an exchange network as a blueprint. The CBDC system will also be programmed as your digital ID with biometrics, and will likely be connected to every detail of your life from health records to Girl Scout cookie sales. They’re doing it in plain sight. I covered a few variables associated with that beastly system in four articles since 2018: “The Orwellian Panopticon Majority Report is Born” Parts 1 and 2 and “Dogged by the War on Cash” Parts 1 and 2. The G20 leadership signed an agreement this week in Bali that’s one stepping stone closer to a panopticon prison.

“With the advent of cryptocurrency, the participants in that speculative venture are responsible for promoting and tweaking a blockchain technology that central banking and governments will integrate with systems such as China’s Skynet. It is only a matter of time before the Orwellian nightmare comes to fruition on a global scale.” – TraderStef, Aug. 2021

G20 Leaders Agree to Global Vaccination Passport System… “The leaders of the world’s largest economies at the G20 meeting held in Bali, Indonesia, this week did much more than discuss current economic troubles. They drafted and signed a declaration to adopt vaccine passports with the purported goal to promote global travel and tourism… A vaccine passport will limit a person’s ability to leave home, work, shop, dine, travel, attend a public event, or even worship. It’s being used to advance a dangerous threat to freedom. We must never accept vaccine passports or tracking apps as the new normal… Why would you need a digital vaccine passport if the ‘vaccines’ don’t stop transmission? Oh right, because this was never about a virus… Either ‘health officials’ are stupid or the agenda isn’t about health.” – CBN News, Nov. 18

The two following video clips highlight the deputy managing director for the International Monetary Fund (IMF) and the head of the Bank of International Settlements (BIS). They clearly state how a CBDC will allow governments to precisely control what people can and cannot spend their money on. When you’re done, download the World Economic Forum’s (WEF) Digital Currency Governance Consortium White Paper Series that’s part of its “Great Reset” agenda. 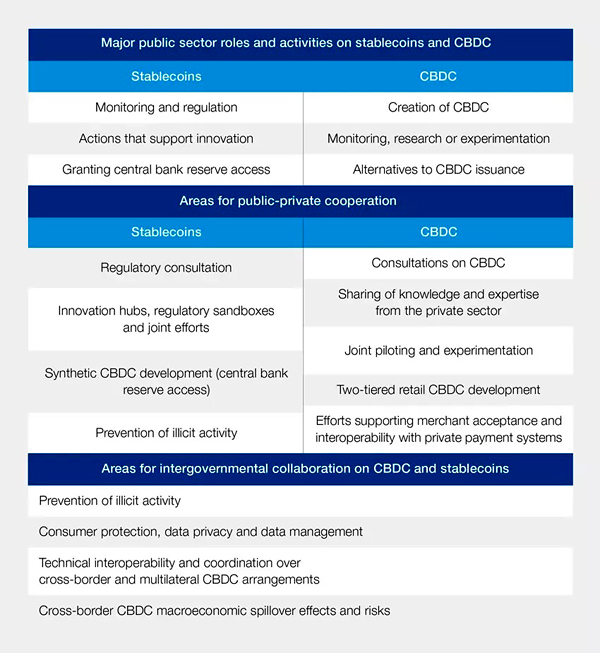 Another article by Jim Rickards was published last month that dives into the “Biden Bucks” CBDC that’s in the works at the Federal Reserve.

Yes, “Biden Bucks” Are Real… “Nowhere to Hide: Imagine if the government decides that gasoline needs to be rationed to further advance the climate change agenda? Your Biden Bucks could be made to stop working at the gas pump once you’ve purchased a certain amount of gasoline in a week. How’s that for control? And in a world of Biden Bucks, the government will even know your physical whereabouts at the point of purchase. Also, if you give donations to the wrong political party or make purchases the government doesn’t like, maybe the IRS will take a sudden interest in you. Who wants to be subjected to an IRS audit? If any of this sounds extreme, fantastical or otherwise far-fetched, it’s not. It’s already happening around the world. China is already using its CBDC to deny travel and educational opportunities to political dissidents. Canada seized the bank accounts and crypto accounts of nonviolent trucker protesters last winter. These kinds of “social credit” systems and political suppression will be even easier to conduct when Biden Bucks are completely rolled out in the U.S. In fact, it’s already starting.” – Jim Rickards, Oct. 21

This week, the banks that are too big to fail (TBTF) and the Federal Reserve Bank of New York (FRBNY) launched a test run for a CBDC infrastructure.

New York Fed Launches 12-week CBDC Pilot Project with Commercial Banks… “The FRBNY stated in the announcement that the project would ‘explore the feasibility of an interoperable network of central bank wholesale digital money and commercial bank digital money operating on a shared multi-entity distributed ledger’ (aka blockchain). Commercial banks involved in the project include BNY Mellon, Citi, HSBC, Mastercard, PNC Bank, TD Bank, Truist, U.S. Bank, and Wells Fargo. These banks would issue tokens and settle transactions through simulated central bank reserves. Director of the New York Innovation Center, said in a statement: ‘The NYIC looks forward to collaborating with members of the banking community to advance research on asset tokenization and the future of financial market infrastructures in the U.S. as money and banking evolve.’” – DefiPlanet, Nov. 18 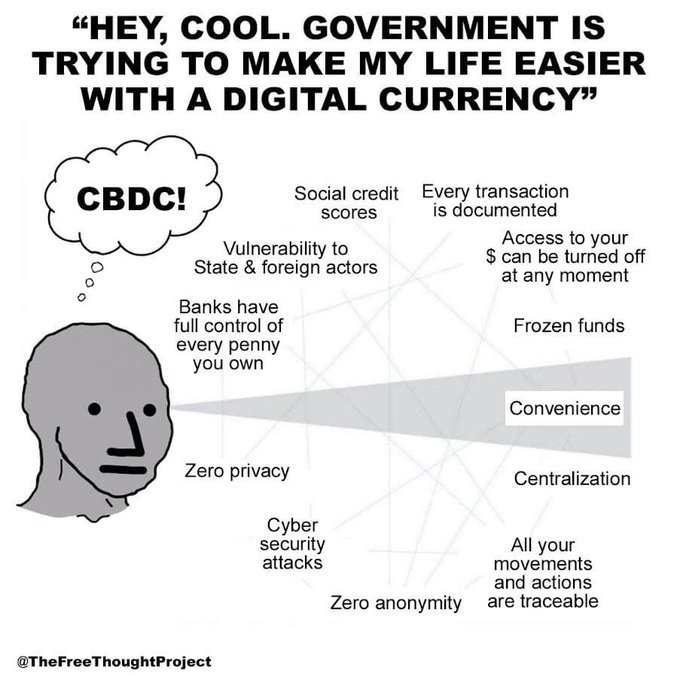 Governments around the world locked you down in a pandemic, mandated billions of people to wear a useless face diaper, tanked the global economy and bankrupted the U.S., killed your grandma, damaged your kids, destroyed small businesses, fired you from a job if you refused an experimental gene-modification jab, are squandering your tax dollars on another foreign war that could morph into WW3, laundered your tax dollars to Democrat election campaigns through FTX, and are linking a false climate narrative to a future social credit score. Are you done with crypto or a glutton for tyranny and punishment? Have you vaulted some gold and silver coin in a safe place? 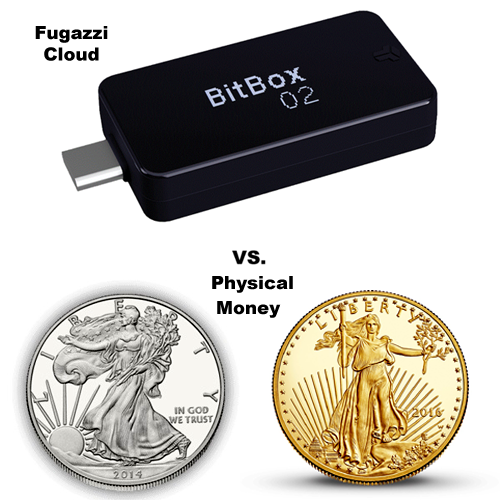 Fugazzi Cold Storage Cloud vs. Real Physical Money In Your Possession Has No Counterparty Risk