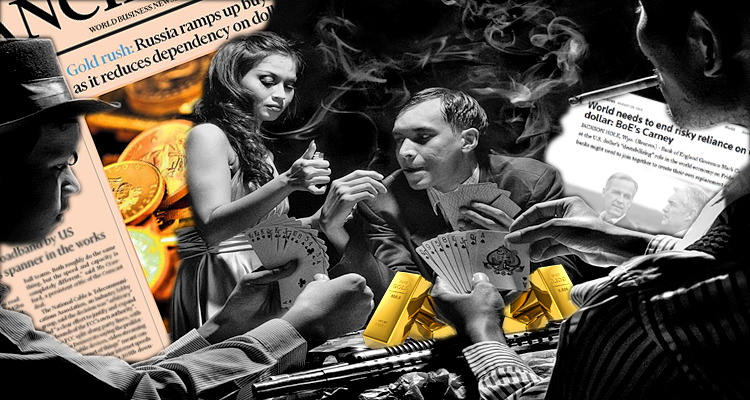 President Trump won the White House in 2016 because we are living in a depression with cyclical recessions along the way, as the U.S. economy and stock market masquerade as boom times. A depression can be defined as a severe and prolonged recession. A typical recession is due to a decline in economic activity. A decline in economic activity includes falling output and employment levels. When an economy continues to suffer recession for two or more quarters, it is a depression.

Last week, the Labor Department revised the total job gains downward from April 2018 to March 2019 by 501,000. It is one of the largest revisions ever published. Morgan Stanley published data that shows global and U.S. economic indicators are worse today than in Sep. 2007, and their proprietary business conditions index has collapsed by the most it ever has. 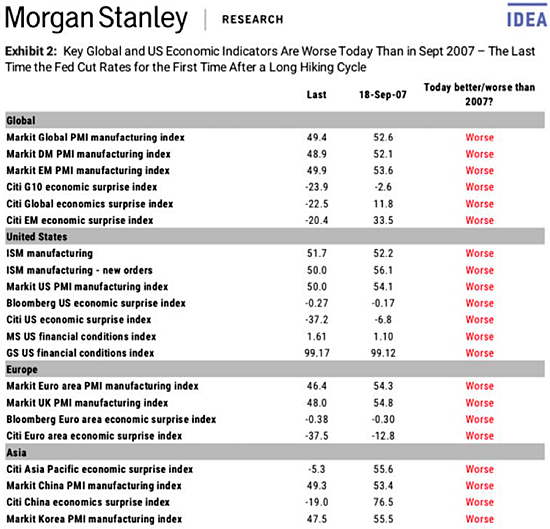 The Great Recession is the last time the Federal Reserve cut interest rates after a long hiking cycle. Fast-forward to today, with an overextended business cycle, insane negative interest rate policy (NIRP) across the board in the West, real interest rates are NIRP across the board if you subtract the official rates of inflation (in the U.S.), corporate debt with negative yields posing a risk unlike anything ever seen, and the Fed’s TaperCaper abruptly bloomed in Dec. 2018 from tightening “patience” to cutting rates after the slow train wreck to 2.5%. 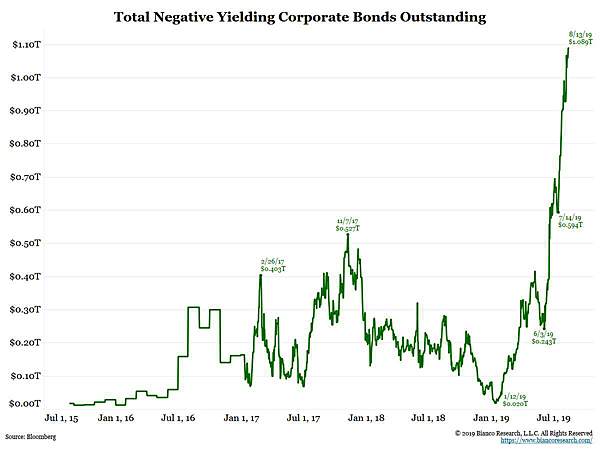 If you would like to rub salt into the doom and gloom this evening, rest your eyes upon the continued collapse in the Velocity of Money.

While the ninth inning of uncharted monetary policy is borderline musical chairs, the superrich are selling stocks, buying real assets, and keeping cash at the ready. Asia’s wealthy prefer physical gold, and central banks around the world are hoarding the pet rock in a frenzy not seen for 50 years. 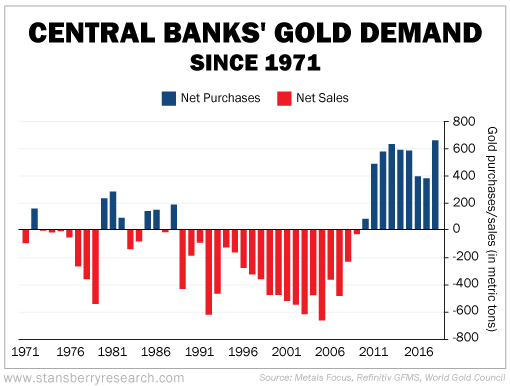 Since we are on the topic of central banks, let us revisit two of the most powerful men that governed monetary policy of Western mercantilism at Jackson Hole this past week. Jay Powell from the Federal Reserve said the U.S. economy was in a favorable place, but hinted at more rate cuts and significant risks on the horizon.

The Governor of the Bank of England, Mark Carney, rattled the establishment and awoke plebs, stealing the show at Jackson Hole vs. headlines from Jay and a trade war escalation with China. What should not be lost from Carney’s speech is that he is exiting his exalted position in Jan. 2020. The topics within his speech that revolve around de-dollarization and a global currency reset are not new, especially amongst the globalist power brokers and central banks that brainstorm often within their think tanks.

Lost amid recent market noise is this manifesto by uber-elite globalist Mark Carney calling for an end to the dollar’s reserve status, creation of a new benchmark currency and global financial power centered in the IMF. You know, little things like that. – Jim Rickards, Aug. 23

Here is an excerpt from Carney’s speech:

“The amplification of spillovers by the International Monetary and Financial System (IMFS) matters less when the global expansions are relatively synchronized or when the US economy is relatively weak. But when US conditions warrant tighter policy there than elsewhere, the strains in the system become evident.

These conditions emerged last year. US fiscal policy had boosted growth at a time when the US economy was near full employment. US monetary policy had to tighten consistent with the Fed’s dual mandate. The resulting dollar strength and financial spillovers tightened financial conditions in most other economies by more than was warranted by their domestic conditions (two thirds of the global economy was growing at below potential rates at the start of 2019, and that proportion has since risen to five sixths). More recently, the dramatic increase in trade tensions has reinforced their effects by increasing risk premium.

Today, the combination of heightened economic policy uncertainty, outright protectionism and concerns that further, negative shocks could not be adequately offset because of limited policy space is exacerbating the disinflationary bias in the global economy.

What then must be done?… In the medium term, policymakers need to reshuffle the deck… In the longer term, we need to change the game… Given the widespread dominance of the dollar in cross border claims, it is not surprising that developments in the US economy, by affecting the dollar exchange rate, can have large spillover effects to the rest of the world via asset markets… In the new world order, a reliance on keeping one’s house in order is no longer sufficient. The neighborhood too must change.”

The cryptophant crowd latched onto the potential for central banks’ crypto, but if they had read the actual speech to see what Carney was alluding to, maybe reality would set in. Perhaps it did, as the Bitcoin bump went poof after a kneejerk reaction higher.

“It is an open question whether such a new Synthetic Hegemonic Currency (SHC) would be best provided by the public sector, perhaps through a network of central bank digital currencies… The dollar’s influence on global financial conditions could similarly decline if a financial architecture developed around the new SHC and it displaced the dollar’s dominance in credit markets…. Widespread use of the SHC in international trade and finance would imply that the currencies that compose its basket could gradually be seen as reliable reserve assets… This would lessen the downward pressure on equilibrium interest rates and help alleviate the global liquidity trap… Given the experience of the past five years, I will close by adding urgency to Ben Bernanke’s challenge. Let’s end the malign neglect of the IMFS and build a system worthy of the diverse, multipolar global economy that is emerging.”

On the other hand, gold smoked all assets across the board and held firmly at Friday’s close of $1,526 per ounce. You can find my most recent analysis on gold in “NIRP Supports Gold’s Explosive Rally with Ultra-Bears and Ghosts in the Asylum” and ongoing Twitter thread since Aug. 15.

Any SHC would likely consist of a basket of currencies backed by a percentage of gold, and a digital ledger would facilitate international trade with balances due at the end of the year. That is a scenario where a shipment of gold could remediate the balance sheet. During a CNBC interview at Jackson Hole, Carney asked the host if he actually read the speech and went on to clarify his thoughts on the crypto subject.

“In a multi-polar world you need a multi-polar currency… spread out as a global basket of currencies and better for the system as a whole.”

Keep in mind that back in Feb. 2018, Carney said Bitcoin is not a legitimate currency by traditional definitions and is neither a means of exchange nor a store of value. Carney has never retracted those statements.

I will close up shop tonight with several articles, interviews, and relevant quotes that may clarify the indigestible media frenzy this past week.

The Case for a New International Monetary System… “We are denying the warped economic consequences of global trade conducted in the absence of orderly currency arrangements. We have not had a rules-based international monetary system since President Nixon ended the Bretton Woods agreement in August 1971. Today there are compelling reasons—political, economic, and strategic—for President Trump to initiate the establishment of a new international monetary system.. the vision of providing a solid monetary foundation for global free trade was shattered by Nixon’s decision to suspend gold convertibility of the dollar… The currency disorder that reigns today is anathema to any notion of free and fair trade.” – Judy Shelton Op-ed at Cato Institute, Summer 2018

The Danger To America is Not Socialism, Do You Know This Villain?… “Samuel Adams gave this warning in 1775: ‘For no People will tamely surrender their Liberties, nor can any be easily subdued, when Knowledge is diffusd and Virtue is preservd. On the Contrary, when People are universally ignorant, and debauchd in their Manners, they will sink under their own Weight without the Aid of foreign Invaders. (sic).’ Some years ago Dennis Prager said ‘we have forgotten what it means to be Americans, we have been sorely negligent in teaching our children about our Founding Fathers and the tyranny they overcame. We have failed to teach our children the Declaration of Independence, the Constitution and the principle of Natural Law which teaches us that our rights are gifted to us by our Creator and not the government.’” – Krisanne Hall, Jan. 2019

Is the dollar’s “exorbitant privilege” is ending…  “Given the persistent—and rising—deficits in the United States (in both fiscal and trade), we believe the U.S. dollar could become vulnerable to a loss of value relative to a more diversified basket of currencies, including gold. As we scan client portfolios, we see that many of them have far more U.S. dollar exposure than we feel is prudent. At this stage of the economic cycle, we believe this exposure should be more diversified. In many cases, our recommendation would likely be to place a higher weighting on other G10 currencies, currencies in Asia and gold.”  – JPMorgan, Jul. 10

The Road To Civil War As I Predicted Long Ago – David Icke, Aug. 9