If only Benjamin was around to talk about his love of turkeys today and witness what a turkey in headlights might look like. The Turkish lira (TRY) plunged today and roiled the global equity markets as fear of additional turmoil or contagion sent investors running for safety in paper assets like the yen and U.S. Government bonds. The lira plummeted 22% against the USD in its worst day since Turkey’s financial crisis in 2001 and crashed nearly 80% against the USD YTD, raising concerns about a full-blown economic crisis. It appears that today’s chaos came on the heels of a deepening rift with the United States, concerns about its own economy, and a lack of action by the political class to properly manage their economy and monetary policy.

After the POTUS doubled down on tariffs for metal imports from Turkey, President Erdogan urged the Turkish peasantry to “trust in God” and exchange their gold, euros, and dollars for lira. The new tariffs are 20% on aluminum and 50% on steel.

“If there is anyone who has dollars, euros, or gold under their pillows, they should go exchange it for liras at our banks. This is a national, domestic battle. This will be my people’s response to those who have waged an economic war against us. Relations with countries who behave like this have come to a point of no salvaging.” – Erdogan

The guest on Fox Business was a bit sanguine about the possibility of U.S. contagion, but it’s worth a listen anyway…

US markets at risk from Turkey’s financial crisis? – Fox Business

Good luck with a “sell your gold jewelry and coins for lira” policy. The peasantry has been on a serious gold buying spree ever since 2016, when Erdogan told them to begin selling dollars and buying gold, but the peasants were buying it up anyway following the 2016 coup attempt because the coup created fear and concern over political uncertainties. Not to mention the CBRT has been reportedly repatriating its gold reserves from overseas since 2017.

Golden Rush-Out: Turkey Extracts Its Bullion Reserves From U.S… “Local media cited government sources as saying that the Central Bank of the Republic of Turkey (CBRT) has transferred its gold reserves from the US Federal Reserve System to Ankara. In March 2018, the CBRT’s gold reserves were worth 25.3 billion dollars; 220 tons of Turkish gold was stored in the US, according to the sources. The largest private Turkish banks also withdrew their gold reserves from abroad, responding to President Erdogan’s call to get rid of exchange rate’s pressure and to use gold against the dollar. In particular, the Halk Bankasi bank transferred 29 tons of gold to Turkey, according to the Turkish newspaper Milliyet.” – Sputnik, Mar. 2018

Turkey has looked like a disaster waiting to happen for quite a while. Erdogan has progressively transformed a well-performing democratic economy into an autocratic failure. The recent diplomatic spat over a detained American evangelical preacher resulting in sanctions against two Turkish politicians, as well as growing concerns over Turkey’s allegiance to NATO, are not helping the situation. In recent days, Turkish lawyers were threatening to invade the U.S. Incirlik Air Base in Turkey where NATO keeps a nuclear weapons cache in order to arrest U.S. military personnel for alleged ties to terrorist groups. It is not the first time Turkish authorities have threatened the base, as the Pentagon and NATO are growing weary of their ability to secure continued access to that strategic installation.

Take notice of today’s gold spike priced in lira, topping out with a 23% rocket shot (RYPO x15) and closing out the day with a respectable 15% gain. 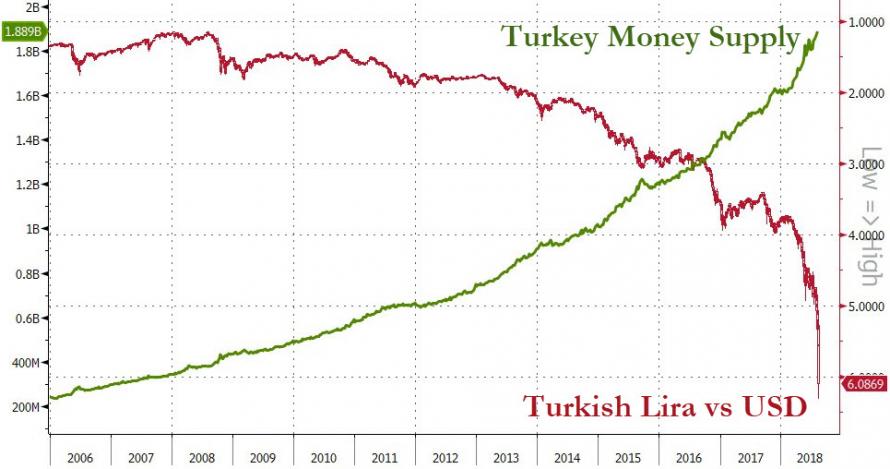 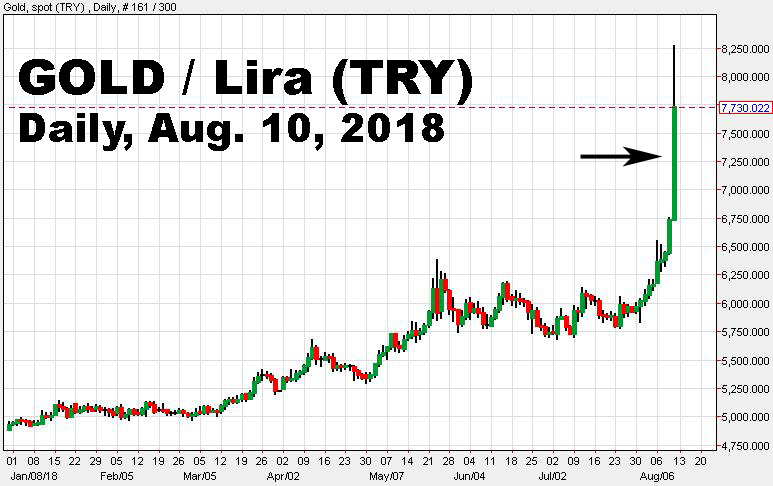 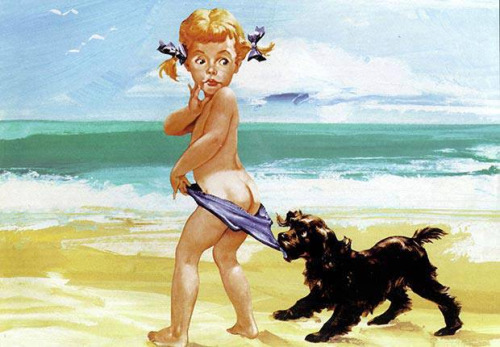 Since we are on the topic of gold, did you see the Commitment of Traders report today?  The commercials (bullion banks) have been building their core long positions for weeks, and dumped a huge chunk of shorts in the low USD $1,200s last week. The large specs (hedge funds) short positions grab the dumb money headlines, while the real news is ‘smart money’ on the other side of the trade.  A major short squeeze appears to be imminent. 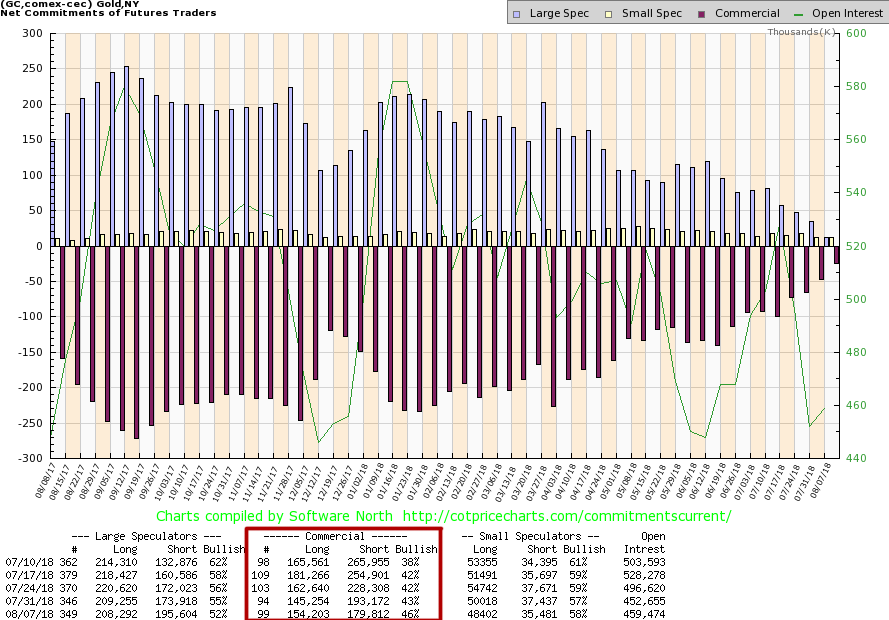 The Turkish Crisis: What You Need To Know About Erdogan, The Lira, Turkey… “Unfortunately for all investors, the dispute between Turkey and the U.S. has a far-reaching global impact. The European Central Bank is reportedly concerned over the health of southern European banks, which have lent large amounts of money to Turkey. According to the Bank of International Settlement, Spanish banks hold $83.3 billion of Turkish debt, French banks hold $38.4 billion and Italian banks hold $17 billion. Defaults on debts this large could threaten the stability of the European financial system. Outside of the Eurozone, other banks around the world are also heavily exposed to Turkish debt.” – MorningStar, Aug. 10

The currency crisis is making it difficult for investors to justify European exposure and emerging markets. It may launch the domino effect as investors pull out of banks with high counterparty risk exposure to Turkey and move into U.S. assets.

Is there a solution to Turkey’s problems? To get the ball rolling, Erdogan must regain confidence from the market players by letting the world see that he is in charge by immediately implementing monetary policy changes. That would typically require raising interest rates decisively and slamming on the national debt brakes without hesitation. It may also require a humble request to the IMF for a little help from your friends, and that is if Erdogan still considers the West and his NATO allies as strategic partners. I doubt he will do an about-face anytime soon, and the POTUS is definitely not going to budge and look weak without a negotiation that benefits everyone.

Turkey says Trump tariff move will harm ties, vows retaliation…“As with all measures taken against Turkey, the necessary response will be given.  The move disregarded the rules of the World Trade Organisation (WTO).”  – AFP, Aug. 10

Erdogan will likely continue to scream conspiracy and blame everyone else but himself or his policy-pushing cronies. It will all be the “speculators’” fault. Such follies are standard practice when any asset class reeks havoc upon a city, country, or corporation. Traders are always blamed for a fat finger, along with a dash of collusion in the dark corners of the night. Forget the algorithm-driven chaos because a majority of folks, including government officials, have no clue how unhinged the system actually is, as it is being managed by mindless robots across the planet.

If the lira is allowed to collapse further, in turn driving inflation even higher and making it more difficult for Turkey to pay its debts, not to mention corporate sector debt, especially any debt denominated in foreign currencies, it will be very bad news for Turkish banks, and contagion could take hold across the financial markets, resulting in unknown consequences.

The Doors – Riders on the Storm 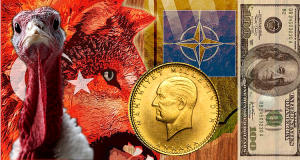