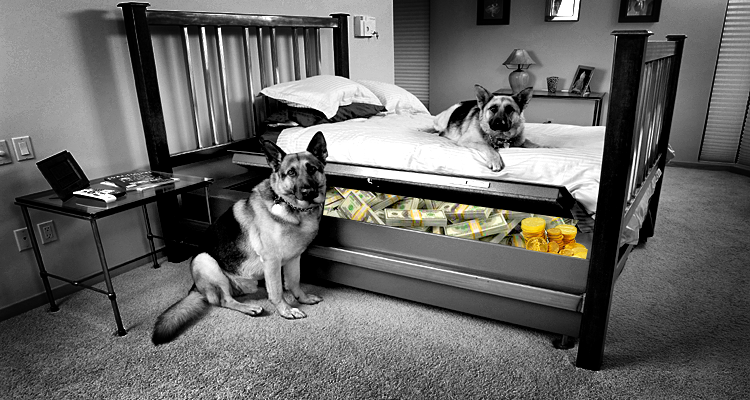 Physical forms of currency such as cash and personal checks are increasingly falling out of favor with global consumers for alternative forms of electronic payment. Online banking and automatic bill pay availability have made the use of cash for high-cost purchases, writing checks, and other traditional means of transaction less and less attractive. The trend is undeniable when you consider e-commerce has grown to represent almost 10% of all U.S. retail sales and is growing by nearly 15% annually. Think of how wide-ranging the effect is upon an economy when a traditional supply chain from manufacturer to consumer is eliminated. There is also a paradigm shift occurring with trust in the use of mobile payment applications.

“If you weren’t hiding under a rock since the 1990s, you probably noticed how cash became a debit card, other monies flew into digital clouds, and we now have cryptophants sporting digital wallets. If you are old enough, you witnessed the demise of gold backed U.S. cash, the last silver certificate of $1 denomination in 1964, the $500, $1,000, $5,000, and $10,000 Federal Reserve note in 1969… Let us cut to the chase (pun intended). The globalist goal is to track you, record you, and tax every single penny you spend. Unfortunately, many bright folks do not get it… The “mark of the beast” is roaming the lands.” – TraderStef, Jul. 2017

But nobody eye know gon’ bite

– Prince, “Muse to the Pharaoh”

Despite all the hype and advantage that electronic payment systems may offer, cash is far from reaching an extinction-level event and is more common in some places than you may have thought. 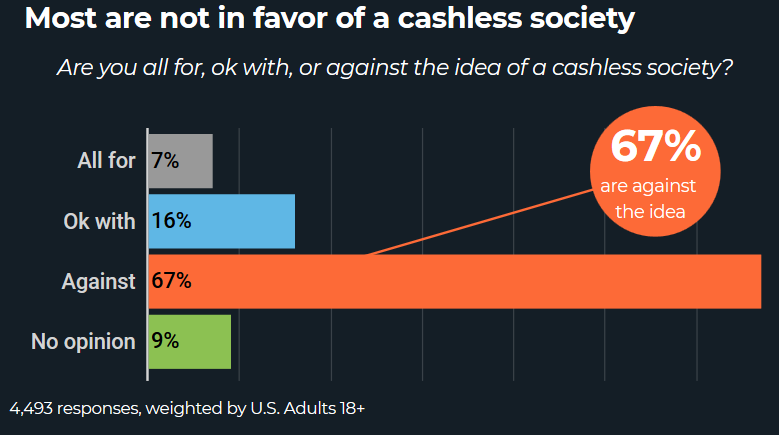 “Cash usage in the U.S. has largely held steady since 2003, despite an increasing number of digital payment methods. Usage has typically ranged from 14.2 to 15.1 percent of GDP, an exception being 2009, when the subprime mortgage crisis contributed to a sudden increase. The economy has since improved and cash share gradually declined, reaching 12.7 percent in 2016.” – Pymnts.com

The British security company G4S released its World Cash Report in April 2018, which surveyed 47 countries covering 75% of the global population and over 90% of the world’s GDP. The report shows that demand for cash is on the rise globally. Cash in circulation relative to GDP increased 9.6% across the globe, up from 8.1% in 2011. Payment habits vary greatly from region to region. In Europe, for example, 80% of point-of-sale purchases transact via cash, while in North America, where card payments are most common, cash accounts for only 31%. In Asia, the rise in online commerce has not eliminated cash, and 3 out of 4 online purchases in several countries are cash-on-delivery. In India, the cash share compared to its GDP is 49.3% so far in 2019. In Mexico, 90% of the population prefers using cash and there are only 10 bank branches for every 100,000 people. Meanwhile, in Sweden, cash accounts for only 2% of the total transactions.

“People trust cash; it’s free to use and readily available for consumers, it’s confidential, it can’t be hacked and it doesn’t run out of battery power– these unique qualities continue to hold significant value to people living on all continents. Wherever people are in the world, they use and value a range of payment options. There is no region where everyone chooses the same way to pay and cash remains hugely important.”

Do gold and silver in the “no counterparty risk” department ring any bells?

Even though Sweden leads the herd to a cashless society, the government now recommends that each citizen keep cash under their bed in small denominations for emergencies due to fears of terrorism or cyber warfare.

‘Stockpile coins and banknotes’: Sweden tells its citizens to squirrel away hard cash under their beds…  “Cashless payments are all the rage but people in Sweden have been told to squirrel away notes and coins… Emergencies envisioned by the Swedish government range from power cuts and other accident interruptions to computer networks… Sweden became the first European country to issue modern banknotes, in 1661 – ahead of the Bank of England, which followed in 1694.” – Daily Mail, May 2019

While the introduction of cashless stores and banning of cash for use in everyday transactions creeps into the daily life of U.S. citizens, the fear of dependence upon electronic payment systems is developing into a backlash of sorts and the launching of local initiatives to get the unbanked into banking.

As cashless stores grow, so does the backlash… “Hembert Figueroa just wanted a taco. So he was surprised to learn the dollar bills in his pocket were no good at Dos Toros Taqueria in Manhattan, one of a small but growing number of establishments across the U.S. where customers can only pay by card or smart phone. Cash-free stores are generating a backlash among some activists and liberal-leaning policymakers who say the practice discriminates against people like Figueroa, who either lack bank accounts or rely on cash for many transactions.” – AP, Apr. 2019 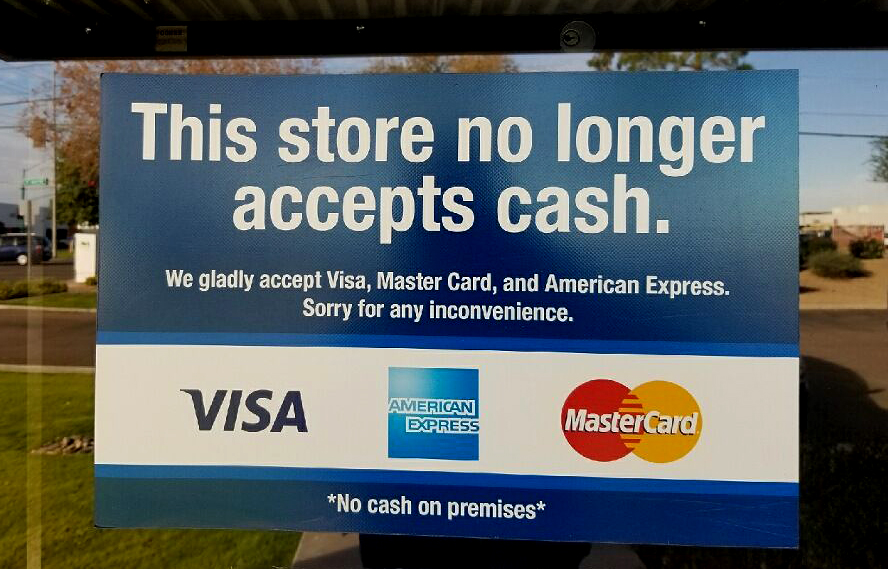 A growing number of businesses hate cash because they think cash transactions take longer and the existence of cash on premises poses a security risk. If you’ve traveled by air recently, you probably experienced the “cashless cabin” trend where wine, nuts, soda, and confectionaries must be paid with a credit or debit card. Sports stadiums have also joined the cashless herd by requiring that payments for hot dogs and beverages at your seat or concession stand be made with plastic. Credit card companies also hate cash since they receive a commission on every purchase through transaction fees, and Visa launched a “Cashless Challenge” campaign to give $10,000 to small businesses that eliminate cash payments. Big Brother really hates cash, so much so that the IMF is busy dreaming up a way to inflict cashless commerce on the heels of financial crises by implementing deep negative interest rate policy (D-NIRP) economics.

The Macroeconomics of De-Cashing… “Although some countries most likely will de-cash in a few years, going completely cashless should be phased in steps. The de-cashing process could build on the initial and largely uncontested steps, such as the phasing out of large denomination bills, the placement of ceilings on cash transactions, and the reporting of cash moves across the borders. Further steps could include creating economic incentives to reduce the use of cash in transactions, simplifying the opening and use of transferrable deposits, and further computerizing the financial system.” – IMF, Mar. 2017

Cashing In: How to Make Negative Interest Rates Work… “In a cashless world, there would be no lower bound on interest rates. A central bank could reduce the policy rate from, say, 2% to minus 4% to counter a severe recession. The interest rate cut would transmit to bank deposits, loans, and bonds. Without cash, depositors would have to pay the negative interest rate to keep their money with the bank, making consumption and investment more attractive. This would jolt lending, boost demand, and stimulate the economy. When cash is available, however, cutting rates significantly into negative territory becomes impossible. Cash has the same purchasing power as bank deposits, but at zero nominal interest. Moreover, it can be obtained in unlimited quantities in exchange for bank money. Therefore, instead of paying negative interest, one can simply hold cash at zero interest. Cash is a free option on zero interest, and acts as an interest rate floor.” – IMF, Feb. 2019

Enabling Deep Negative Rates to Fight Recessions: A Guide… “The experience of the Great Recession and its aftermath revealed that a lower bound on interest rates can be a serious obstacle for fighting recessions. However, the zero lower bound is not a law of nature; it is a policy choice. The central message of this paper is that with readily available tools a central bank can enable deep negative rates whenever needed—thus maintaining the power of monetary policy in the future to end recessions within a short time. This paper demonstrates that a subset of these tools can have a big effect in enabling deep negative rates with administratively small actions on the part of the central bank.” – IMF, Apr. 2019

The war on cash is not going away, and Big Brother’s Orwellian panopticon plan to digitize currency will slowly erode away your liberty, freedom, and net worth until you wake up one day.

“If the American people ever allow private banks to control the issue of their money, first by inflation and then by deflation, the banks and corporations that will grow up around them (around the banks), will deprive the people of their property until their children will wake up homeless on the continent their fathers conquered. The issuing power of currency shall be taken from the banks and restored to the people, to whom it properly belongs” – Thomas Jefferson

Real Negative Interest Rate Policy (NIRP) Vs. Gold… “A clandestine policy of NIRP is an attempt by central banks to reduce global debt levels. The last time I checked there was $75 trillion in global money supply, low to near zero interest rate policy (ZIRP) across the board, an inverted yield curve in the U.S. that is flip-flopping, and $11 trillion of sovereign negative yield bonds with 18 countries on the NIRP list. It all adds up to an upside-down world with more liquidity and more leverage at lower rates.” – TraderStef, Apr. 2019

In the meantime, a bed bunker safe might be an option. 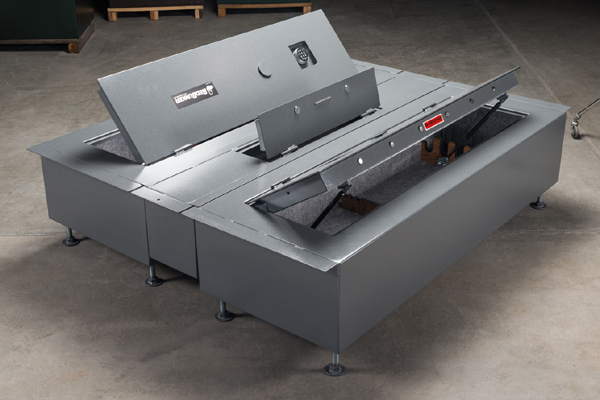 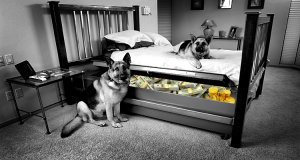