The Dow and S&P 500 Plunge Continues. Your Move – The Charts Say?

I published “Trade Wars and Fedspeak Plunges the Dow and S&P 500 – The Charts Say?” back on Mar. 22.  Those charts are included below, along with new charts and assistance from Doc Holiday and Johnny Ringo. Enjoy their famous poker scene at the end of the article.

The opinions of how, why, and where the stock market is headed continue to flow like Niagara Falls, just as they were after the initial January rollover and February plunge, and the markets have not yet recovered, by a long shot.  I am not going to muddy the waters with too much news to take in.  Albeit, it is all still in my head, even if I try to ignore it, so please forgive me for the Rocket Man plug… 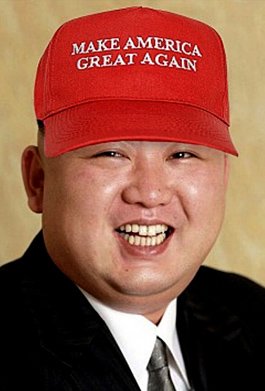 The North Korea situation is not over until the fat lady sings.  I also believe the Noble Peace Prize nomination of the POTUS to be premature.  But hey, Obama got one immediately after taking office for doing nothing. I digress.

Donald Trump formally nominated for a Nobel Prize for “his tireless work to bring peace to our world” – The Telegraph, May 2

I also went out on a limb with the Trump clan because they were taking credit for a stock market rally following the 2016 election.  I suggested it would have been prudent to not “own it” and let the markets settle in for a year or two first while waiting for potential progress on the political and fiscal fronts to take shape, while retaining the political capital earned.  Taking credit while markets were overheating in spike mode juxtaposed against bubble claims made by the POTUS before he took office will not age well if the markets really get whacked.  Plausible deniability is a much better Trump card. 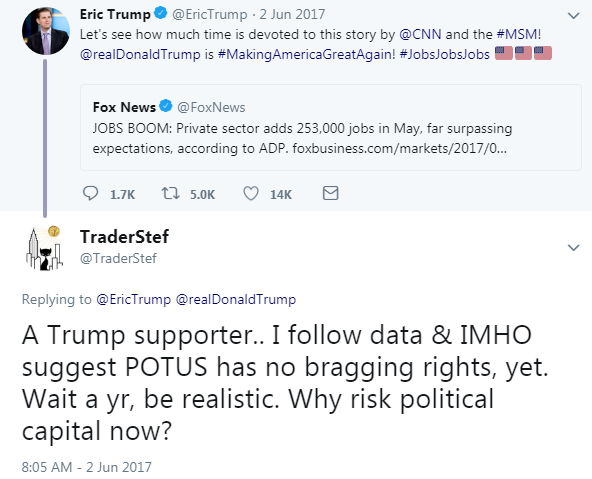 Can you believe everyone is drooling over the “symmetric on inflation” statement from the FOMC this week?  I have a newsflash: it’s not the first time, and the Fed folks have been writing about it for at least a couple years.  Google it and scroll a few pages.

The Fed might have buried a key policy signal to investors in its March statement – Business Insider, Mar. 2017

A few more articles to peruse…

At the Fed, the Scene Is Being Set for Financial Disaster – A crash could prove to be Donald Trump’s worst legacy… “Warning: What you are about to read is not about Russia, the 2016 election, or the latest person to depart from the White House in a storm of tweets. It’s the Beltway story with lars in play and an economy to commandeer, hiding in plain sight… We have entered a landmark moment: no president since Woodrow Wilson (during whose administration the Federal Reserve was established) will have appointed as many board members to the Fed as Donald Trump. His fingerprints will, in other words, not just be on Supreme Court decisions, but, no less significantly, on Fed policy-making for years to come—even though, like that court, it occupies a mandated position of political independence.” – Nomi Prins for The Nation, Apr. 26

Speculative Bond Short Hits New High: Others Claim “Rates Headed to Zero”…  “Inflationistas think a major inflationary move is at hand and they bet that with futures. I suggest the opposite… Overdue credit card debts are piling up. More Americans are falling behind on mortgages. Car sales are dismal. Consumer spending is drying up. The global economy is slowing. These numbers are huge deflationary. Here are my definitions.” – Mish Shedlock, May 1

Bill Gross Throws In Towel On Bond Bear Market… “It appears that Jeff Gundlach was right when he said, ‘Bill Gross Is Early’ on his bond bear market call…  Reminding his audience of the rivalry between himself and Bill Gross, Gundlach disagreed with the former bond king, who made headlines today with his statement that the bond bull market is over, and said that ‘Gross is too early with his TSY bear market call.’ What is the catalyst for Gundlach? As he explained, one ‘needs to see the 30Y at 2.99% or above for the trendline to break.’” – ZeroHedge, May 3 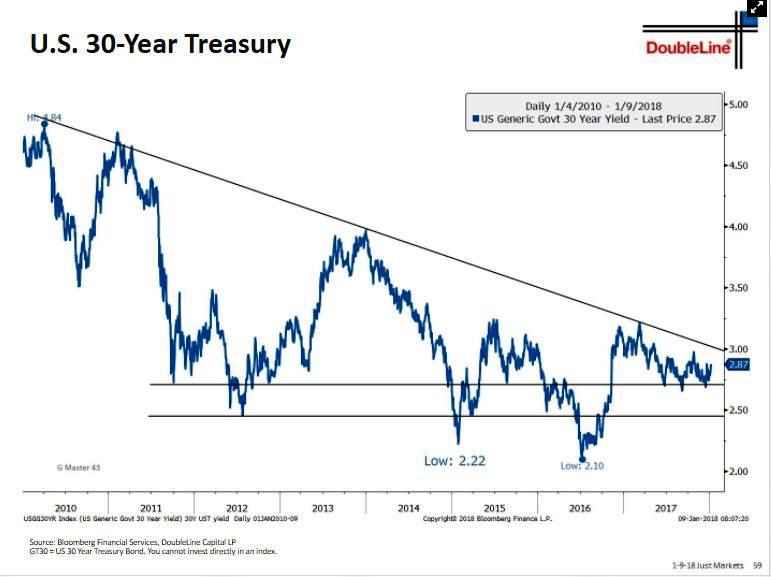 On to the charts.  To view a larger version of any chart, right-click on it and choose your “view image” option. 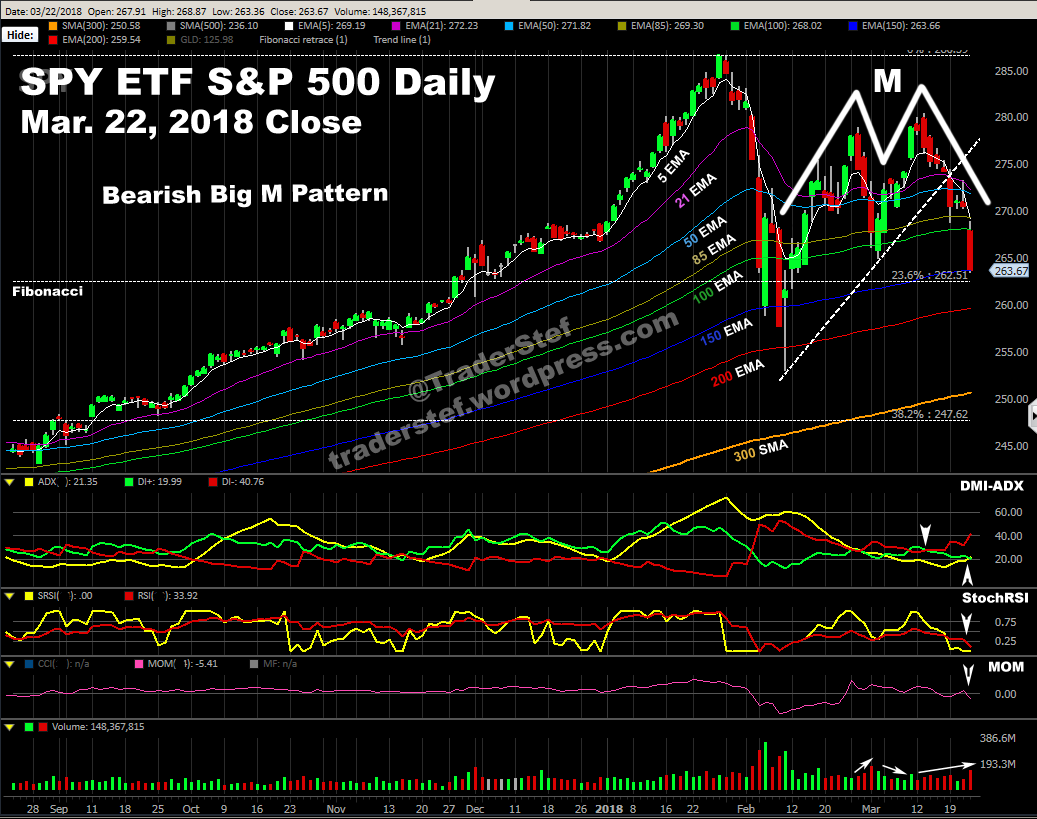 “We do have the ingredients of a potential Double Top.  With the wave down since Mar. 13th, a trendline drawn up from the Feb. 9th low was taken out decisively, and a bearish Big M pattern has formed. With today’s 724pt plunge, the 100 EMA is decisively breached, with the price putting on the brakes at the 150 EMA, slightly above the 23.6% Fibonacci. Today’s downside Soldier Candlestick sets the stage for the potential of more downside price action. The 200 EMA would be the next bus stop, and if momentum continues further, a visit approaching the Feb. 9th low, or possibly the 300 Simple Moving Average (SMA) and 38.2% Fibonacci are all in the cards. The studies are bearish across the board, with a negative Alligator Tongue set-up on the DMI-ADX, the StochRSI is bouncing along the bottom of an oversold condition, the Momentum Indicator is going south, and volumes are falling on each price move up, while increasing on each price move down. Outlook for the chart is Bearish.” 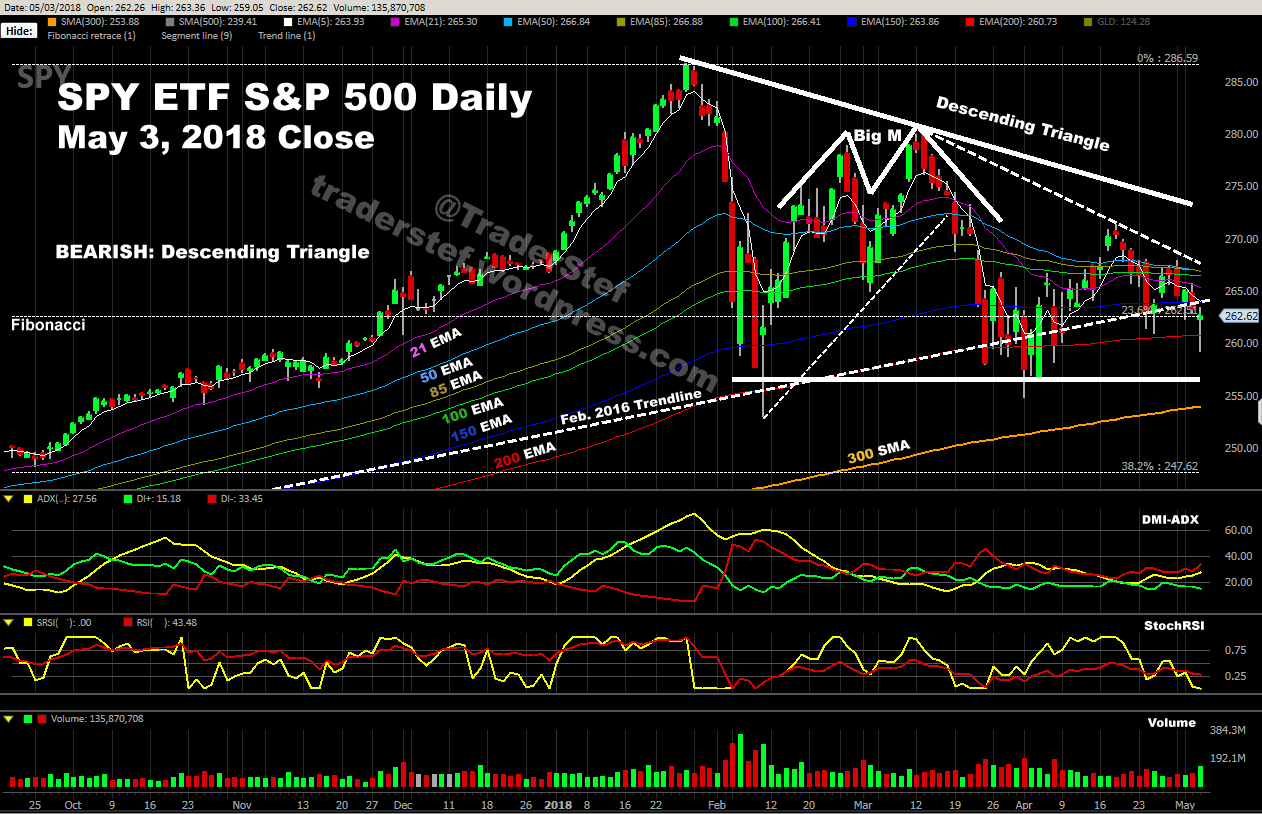 The new pattern that appears to be taking hold is a bearish Descending Triangle.  The Big M played out as suspected, with a Double Top confirmed, following the late January high.  The price continued to fall, with spurts of rising sell volume as it bounced along the 200 EMA.  The price almost collapsed down to the 300 SMA, but a trendline drawn up from the Feb. and Nov. 2016 lows provided additional support and continues to do so.  There was a pivot to the upside during April, and all the moving averages were taken back out for three days, but that price rise came with lower buy volume prints, which are typically a bearish indicator.  Since late April, the price has fallen back down to the 200 EMA, but it did close above it at the 23.6% Fibonacci as of today’s close.  Take note that since the second half of the Big M, the 21 EMA has fallen through all the moving averages except the 150 and 200. The DMI-ADX study continues a negative print as it has since the second half of the Big M, with no sign of reversing to the positive.  The StochRSI traveled topside during the pivot but is now back in the valley of oversold, where it could remain for a brief period or flatline if the price plunges to the 300 SMA or if the price advances to the next Fibonacci level down.  The chart remains Bearish. 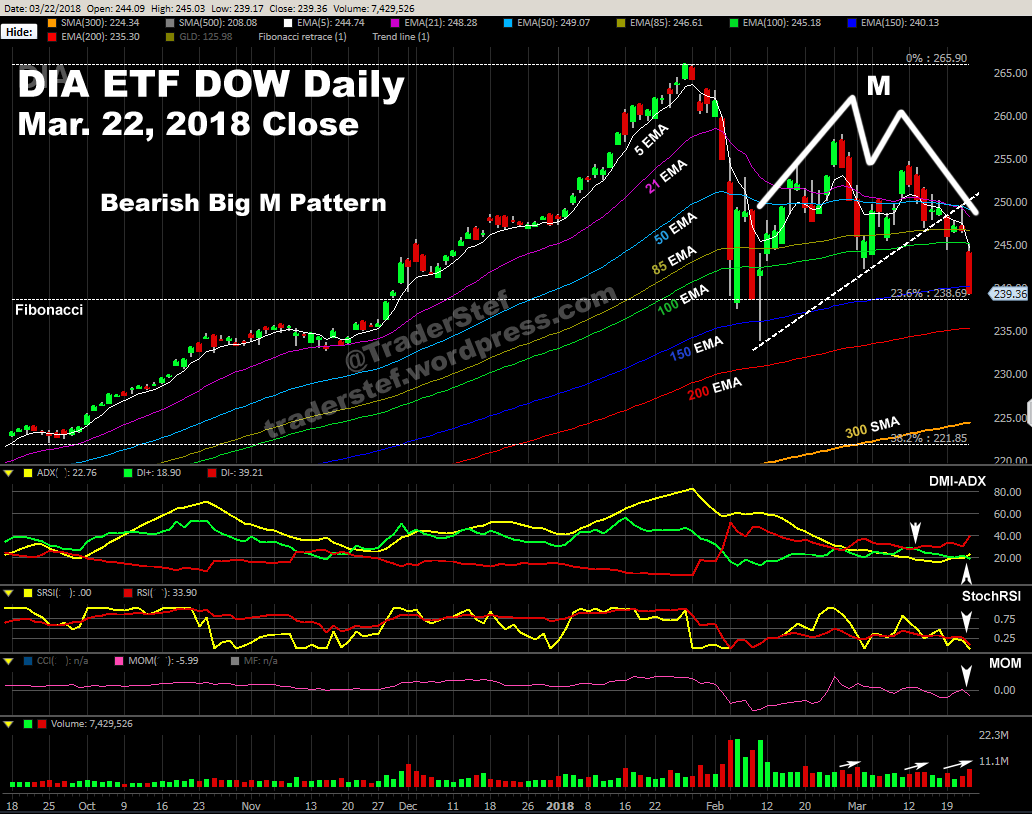 “Analysis on the $DIA is identical to the $SPY. Outlook for the chart is Bearish.” 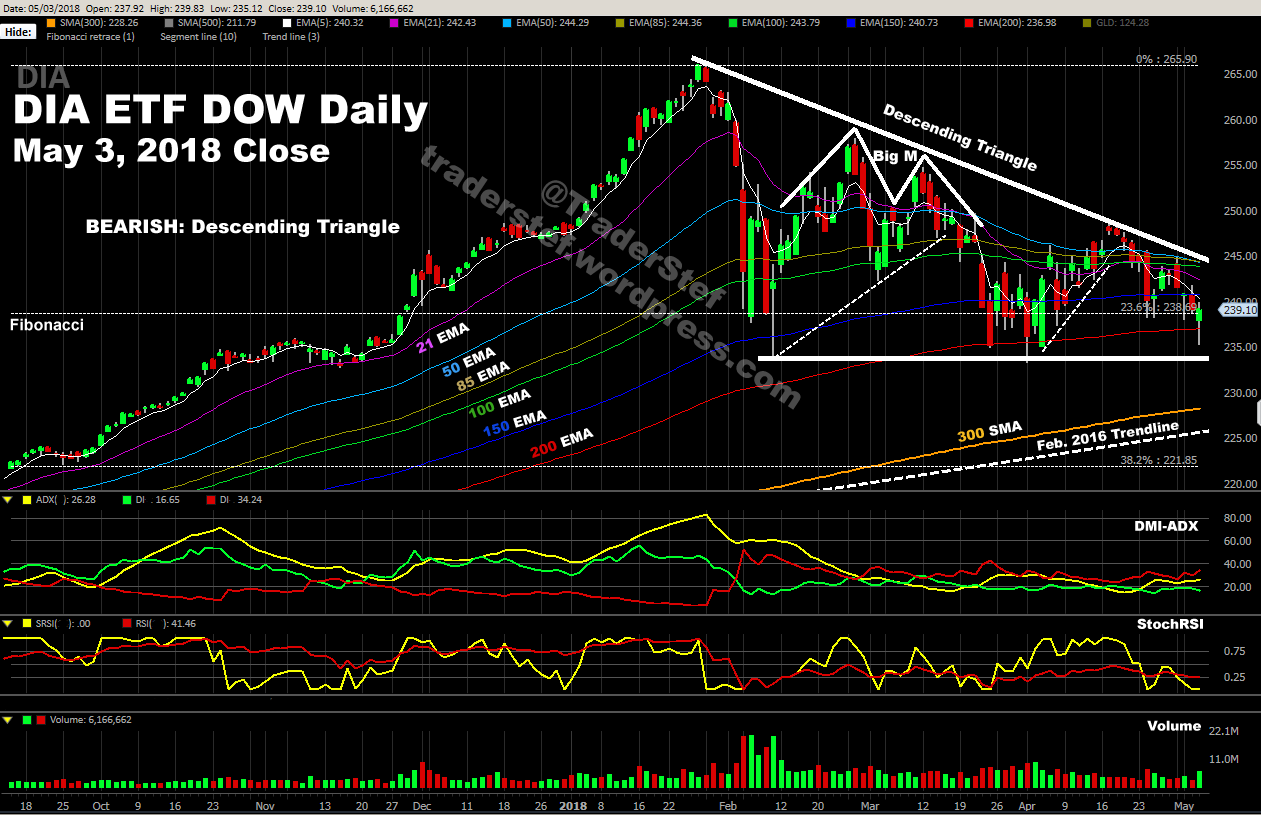 The analysis on the $DIA is identical to the $SPY, with one exception.  The trendline drawn up from the Feb. and Nov. 2016 lows is not touched.  Outlook for the chart remains Bearish.

Tombstone (1993): Doc Holliday vs. Johnny Ringo.  Did you know that the city of Tombstone, AZ founded in 1879, was due to a historic mining claim responsible for the Arizona Silver Rush, after the Great Gold Rush and American Civil War?