Econ Data is Burning, and Gold Technical Analysis for Luddites 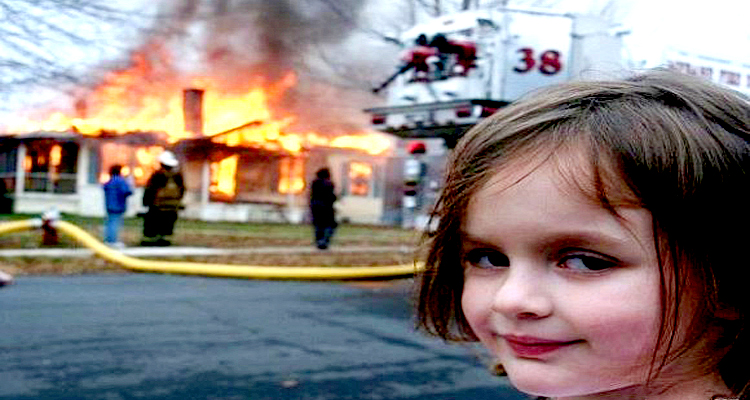 A technical analysis Luddite is a trader/investor who despises automated trading platforms and realizes the only way to beat the machines 70% of the time is to play them at their own game – pattern recognition and math. Improvise, adapt, and overcome with fusion analysis.

Some economic data releases from this week are worthy of review before moving on to the gold charts tonight. In summary, interest rates remain near ZIRP or are NIRP around the world, the Fed is printing liquidity into the financial system at a quicker rate than during the Great Financial Crisis, one TBTF bank let a cat out of the bag by forecasting an economic collapse due to the Fed’s “not QE,” and global debt surged to $250 trillion. With all that said, Jay Powell made it very clear last week that inflation is the bellwether for monetary policy decisions in the near-term unless some other risk brewing on the world stage steals the show. Additional data doom can be found at “A Mashup on the National Debt, GDP, Velocity of Money, NIRP, and Gold,” published on Oct. 30.

The U.S. industrial production data released for October is the worst print since March of 2009. 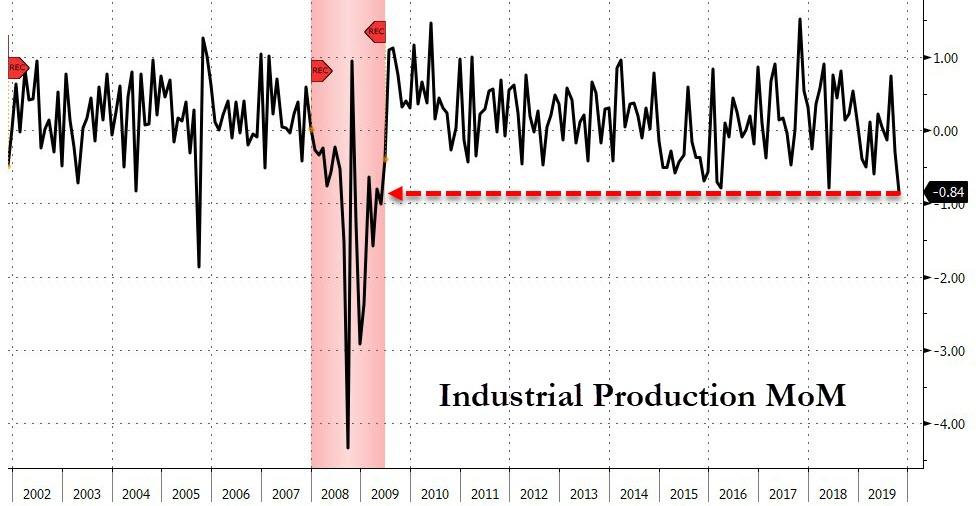 Why did the stock market brush off such a bad industrial production report today? The blame has been placed on General Motors due to the 40-day strike. Rumor has it that Ford may be next. If autos are removed from the equation, industrial production dipped only 0.1% instead of 0.8%. Due to negative economic data that continues to pop up around the world, it is possible that global manufacturing output growth will remain near zero for an extended period.

The Fed was likely disappointed with the import and export price data released today, which fell at the fastest pace in three years on a year-over-year basis. Can you say “deflation?” 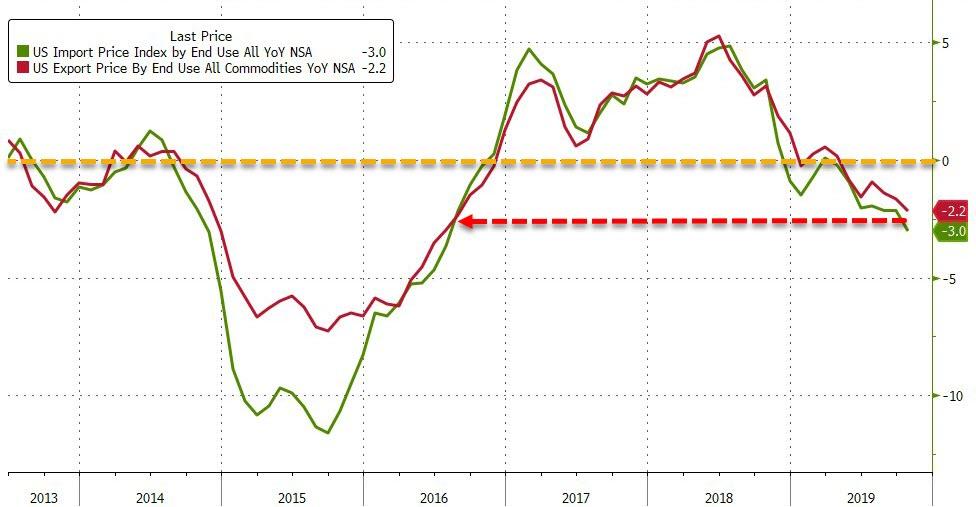 The price of products imported into the U.S. fell across the board in October while oil tanked 3.7%. Costs have plunged 3% over the past year, making it the largest decline in a 12-month period since 2016. Some products have become more affordable in the U.S. as a result, but that adds unwanted deflation on the Fed’s plate. Export prices also dove into the deflationary pool, with a 2.2% decline over the past year. Official inflation data remains low to stagnant around the world and is unlikely to rise by much with continued reports of paltry economic growth. Tariffs from trade wars increased prices on few goods and services.

As we approach the holiday shopping season in the U.S., the consumer is not keen on splurging this year. Annual retail sales growth slowed down considerably. 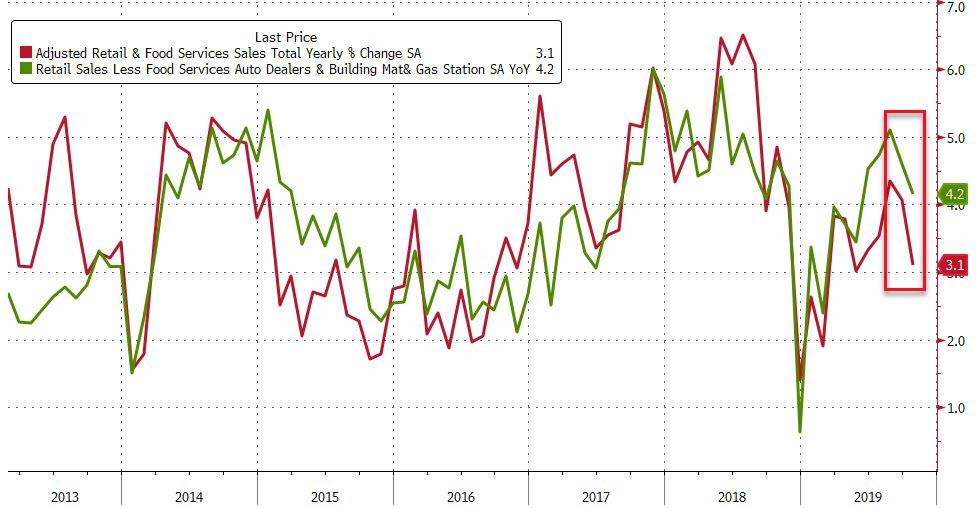 GDP estimates from the Fed’s GDPNow and NowCast for 4Q19 are not looking good for the holiday shopping season. The GDPNow forecast plunged to just 0.3% from 1.0% only a week ago, and NowCast fell from 0.7% to 0.4%. It is possible that GDP could print negative in the near future.

“After this morning’s retail trade releases from the U.S. Census Bureau, and this morning’s industrial production report from the Federal Reserve Board of Governors, the NowCasts of fourth-quarter real personal consumption expenditures growth and fourth-quarter real gross private domestic investment growth decreased from 2.1 percent and -2.3 percent, respectively, to 1.7 percent and -4.4 percent, respectively.” 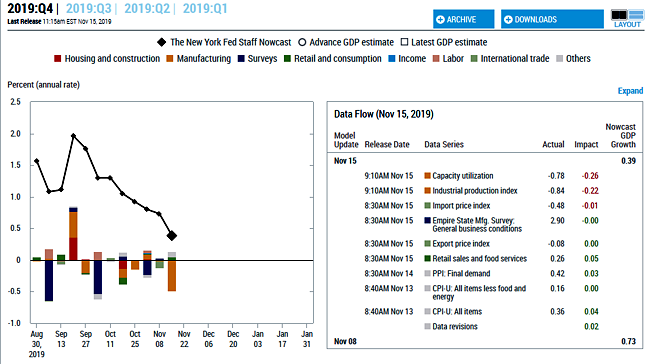 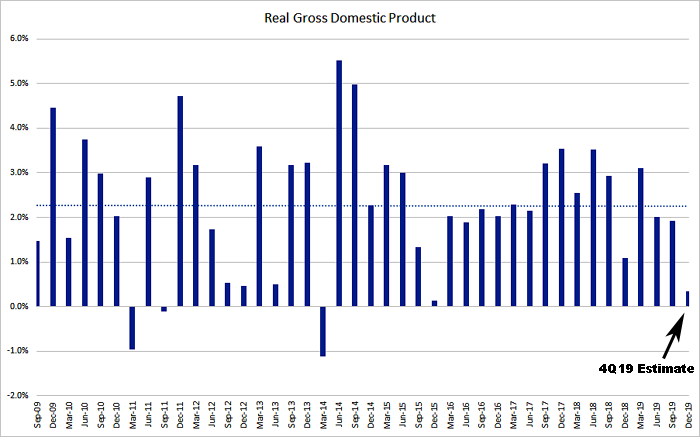 The Cass Freight Index remains in contraction. The data includes all domestic freight modes and is derived from $28 billion in transactions processed by Cass annually on behalf of its client base of hundreds of large shippers. The data is a broad sampling of industries, including consumer-packaged goods, food, automotive, chemical, OEM, retail, and heavy equipment. 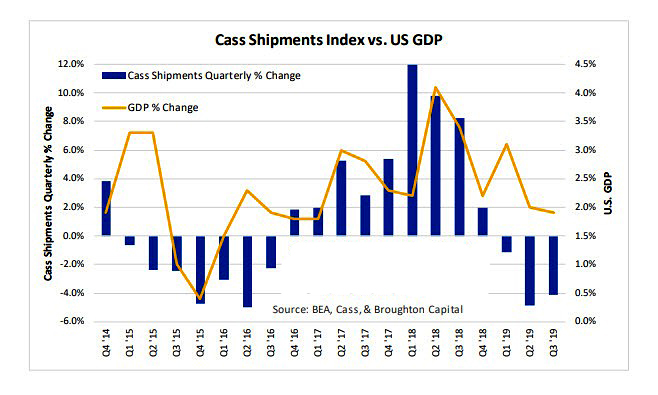 Here are the links to my recent analyses on the price advance of gold. To view a larger version of any chart, right-click on it and choose your “view image” option.

Here is the 20-year seasonality chart for gold that is marked for where we are today.

Here is the gold spot weekly chart as of the Nov. 15 close, overlaid with the CFTC’s Commitments of Traders (CoT) report data from Nov. 12 and released on Nov. 15. The CoT is always delayed by one week. The Nov. 19 CoT data covering the previous week’s price action will be released on Friday, Nov. 21. 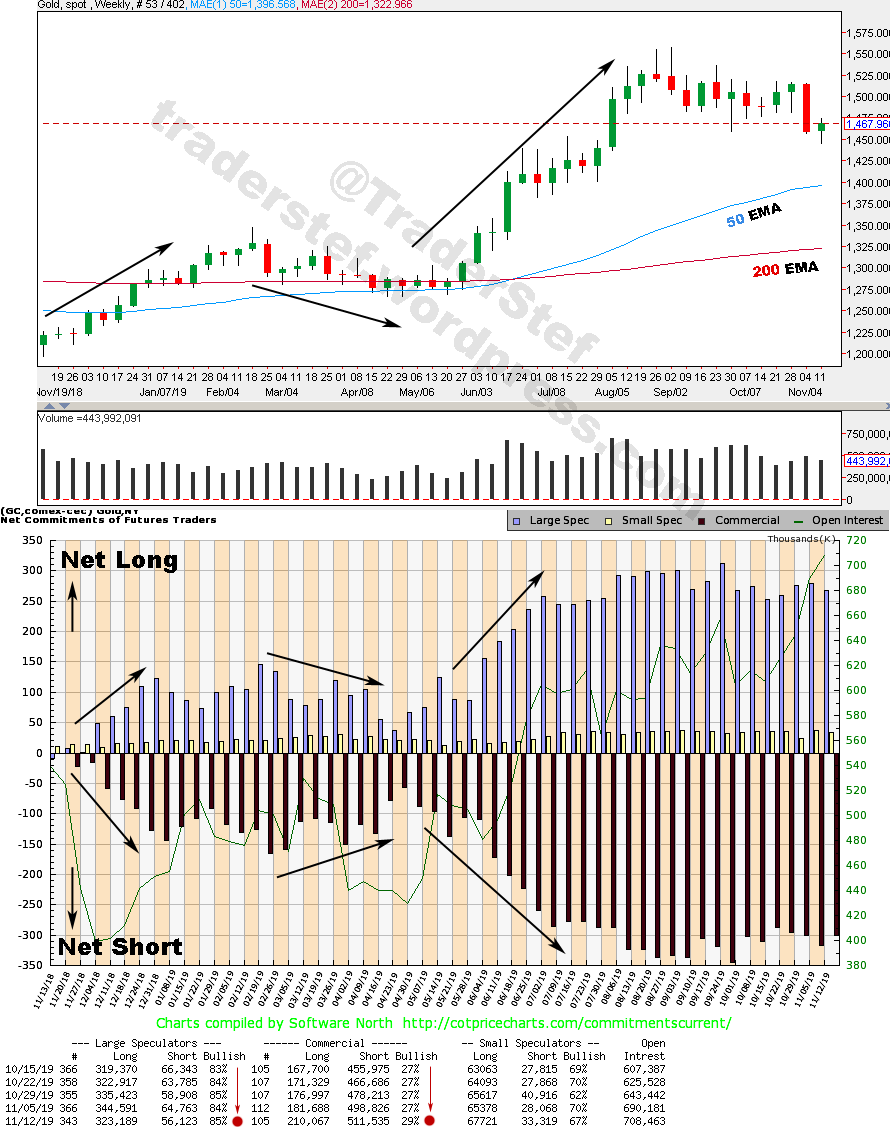 The purpose of the overlay is to help identify the near-term price trend based on positioning by the commercials (bullion banks) and large specs (hedge funds). Almost without exception, the commercial (bullion banks) traders build short positions during a rising price trend and add longs when the price is falling. Large specs (hedge funds) add long or short positions to capture the momo play of the current trend. When the price is approaching an inflection point, their positioning begins to flip. Zoom in to the bottom of the chart and note the Nov. 12 data points marked with red dots. I included the 50 & 200 Exponential Moving Averages (EMA) for reference. Note that both the commercials’ and large specs’ bullishness are growing despite fluctuations in the short vs. long data, as the overall Open Interest (green line) is growing. 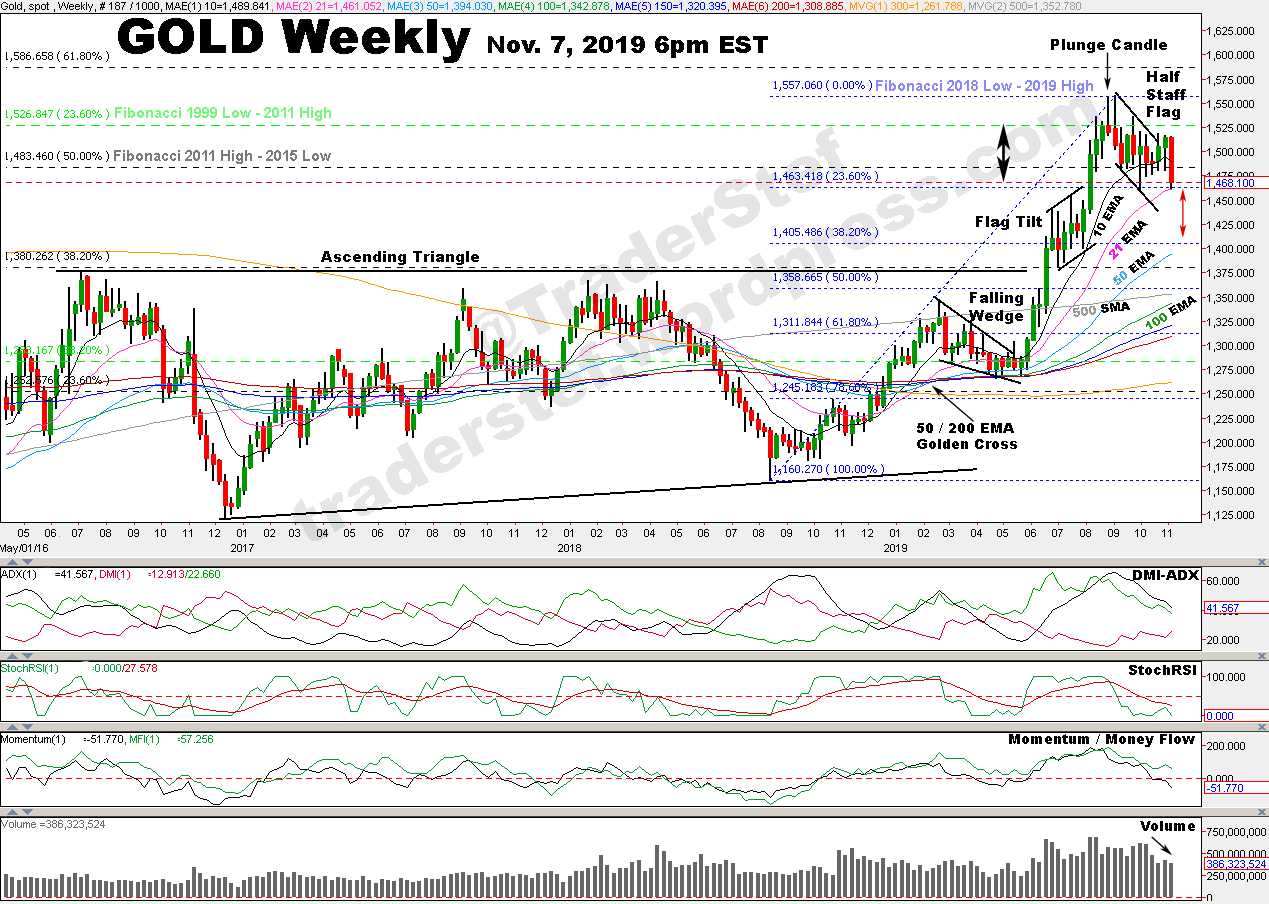 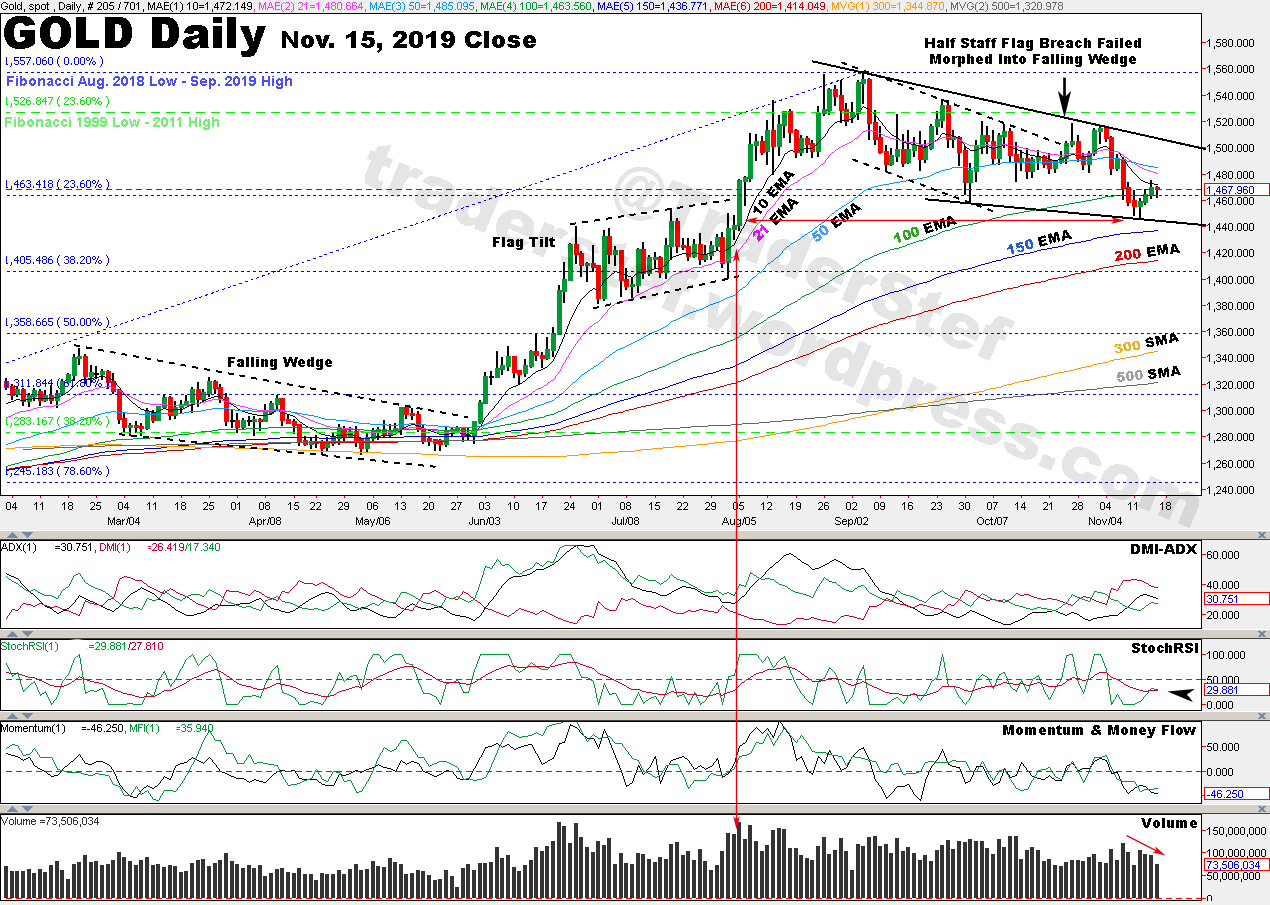 “The price action got interesting during the second half of the trading day on Friday after the Fed announced continued REPO operations until Oct.10 and China’s negotiators for the trade war departed the U.S. early… the price action cleared the 10 and 21 EMA resistance with a $1,515.34 print at the close. The $1,526 Fibonacci must be breached again on volume in order for the price to retest the $1,557.06 high and clear the way for a challenge of the $1,586 Fibonacci level. Volume continues to falter and must pick up the pace in order to challenge the price levels noted. The DMI-ADX remains positive but indecisive, the StochRSI has risen up and out into a positive trend, and the Momentum and Money Flow are back on the rise.”

“This is the sixth week that the gold price has not been able to retake the $1,526 Fibonacci level. Despite the pullback, there is no major technical damage to the chart thus far, but the situation is precarious. Today’s price action tapped the $1,463 Fibonacci that matches a low put in five weeks ago, and due to that length of time, the 21 Exponential Moving Average (EMA) is now acting as support. If the 21 EMA is breached to the downside on heavy sell volume, the price could free-fall inside the gap between two Fibonacci levels where there are no moving averages, which is pointed out by the double red arrow. A worse-case scenario is $1,400 if significant progress with China confirms in the near-term, but several lateral support levels with substantial buy volumes in the previous Flag Tilt pattern will provide some support between $1,430 and $1,450. Unless substantial dip buyers appear soon or some other market event trips the machines into risk-on mode, the risk is high for further downside. One positive that stands out is that Volume has fallen throughout the price correction since mid-September. The DMI-ADX remains positive but continues to roll over, the StochRSI is deep into oversold territory, and the Momentum and Money Flow are in plunge mode. I remain bullish long-term, but caution is warranted until $1,526 is taken out with conviction. In the meantime, it is a scalping environment for traders and a core position-building opportunity for the seasoned investor.”

The China trade war headlines have become a dominant force in the price action for gold. In late September, a bullish Half Staff Flag was threatening a breakout before news triggered automated trading platforms and whipped gold back under its topside trendline. Positive headlines on the potential for a trade deal are currently having a more pronounced effect on downside price action than negative headlines are having on upside movements. During the first week of November, stock markets were giddy over a potential first-phase deal, and gold experienced a sharp retreat to the $1,483 Fibonacci and 21 EMA (see weekly chart). A seesaw of sentiment about the deal followed, and automated stop-loss trading triggered more downside to $1,445.62 over a three-day period. Take note of the long, red arrows on the daily chart that point out three large buy volume days where the current price action has found lateral support from the previous Flag Tilt pattern. The choppy price action and pivot off $1,446 morphed the Half Staff Flag into a Falling Wedge pattern. Toward the end of this week, doubts about a trade deal delivered upward momentum to the gold price and printed a high of $1,475 on Thursday and a weekly close at $1,468.

The price action has closed back above the 100 EMA on the daily for three consecutive days. The 10 EMA is the immediate overhead resistance. The 50 EMA near the $1,483 Fibonacci (see weekly) is the next resistance, and that price level provided support from September through the first week of November. The topside trendline of the Falling Wedge is resting at $1,500. The DMI-ADX is beginning to roll over and out of a negative momentum setup, the StochRSI is threatening a break to the upside, the Momentum and Money Flow have bottomed out, and the Volume was falling with the fall in price early in the week.

The 50 EMA and topside trendline of the Falling Wedge have become more important resistance levels than the $1,526 ever was by itself. Also, keep eyes on $1,500 for upside momentum, and beware of the China trade war headlines because the mindless machines buy and sell without a conscious.

Whether or not you monitor the Democrat clown show masquerading as an impeachment inquiry, the following five-minute video clip of Republican Rep. Elise Stefanik is worth your time. Stefanik takes the former U.S. Ambassador to Ukraine to task on details and ruins shifty Schiff’s sexist sandbox. The clip nicely sums up two days of nonsense.