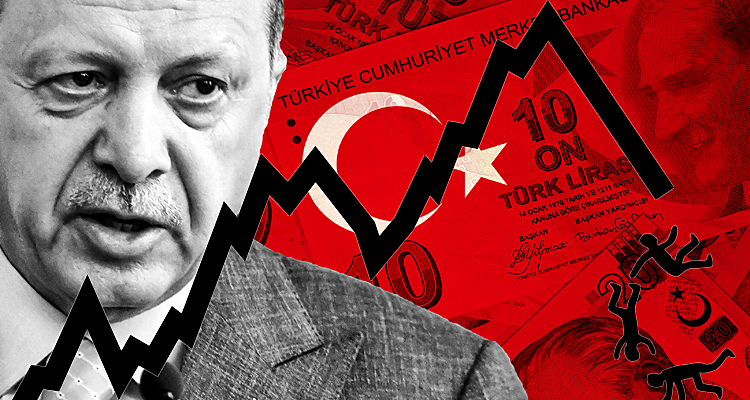 Turkey’s economic meltdown was developing for a while without much coverage in the U.S. mainstream press, at least until Apple announced a shutdown of sales through its Turkish Website on Nov. 24. Apple was forced to halt sales after a historic 15% plunge in the Turkish lira that caused chaos in currency repricing. Retailers in Turkey continue to struggle with rapid price adjustments due to the hyperinflation-like situation and economic turmoil. The prices of Apple products were already significantly higher than in the U.S. due to additional taxes and miscellaneous fees. Apple reopened its online store on Nov. 30.

Apple product sales in Turkey reopens… “Apple has officially reopened product sales in Turkey after shutting it down due to Turkish lira and economic instability. Prices across Apple products have also significantly increased due to inflation in the region. The country’s native currency, Turkish lira, devalued versus the US dollar and caused the Cupertino-based company to temporarily halt sales.” – iLounge

The lira has fallen to record lows against the U.S. dollar over concerns that more economic turmoil is afoot after President Erdogan defended recent interest rate cuts. The lira lost 43% of its value YTD during the last week of November and more than 22% in the previous week alone.

Turks are wrestling with early signs of hyperinflation as prices rise daily. The cost of milk, medications, and toilet paper are soaring, gas stations close when they run out of stock, unemployment is through the roof, the lira is plunging against the euro and dollar, wages and pensions no longer cover the cost of staples to survive, and the level of poverty is growing across the country. Bread lines have sprung up at neighborhood kiosks because people are turning to cheap government-issued bread, and potatoes and onions have become popular to meet basic needs and avoid starvation.

Many Turks Can’t Afford Bread, and Bakers Can’t Afford to Make It… “When it comes to bread, a hallowed staple that Turks traditionally eat with every meal, the government has intervened significantly, pressuring bakeries to sell the traditional white loaf at a price lower than it costs to make, hoping to short-circuit the inflation that Mr. Erdogan fears could sow discontent and dim his election chances 18 months from now. Grocery stores have been forced to stick to a fixed price for selling bread that is set by the Chamber of Bakeries, a trade association, but most bakers said the order came from the central government… Yet, in a sign of the depth of the economic crisis, bakeries forced to keep prices low are facing bankruptcy. ‘I cannot turn around the business,’ said Ahmet Ucar, 39, whose bakery stood up the hill from the government kiosk. ‘The price of flour keeps increasing.’” – NYT, Dec. 15

Turkey’s unstable economy is stuck in a downward economic spiral. High interest rates on bonds initially attracted foreign investment to accept risk and keep lending, but that eventually stunted economic growth. President Erdogan directed the central bank to lower interest rates and insisted that higher rates were the cause of inflation, even though lower rates put more money into circulation with increased borrowing and spending, which ultimately drives inflation higher. The central bank has cut its key interest rate by 400 basis points to 15% since Sep. 2021, in line with Erdogan’s plan to prioritize exports and lending against a wall of criticism from economists and lawmakers that viewed his policy as reckless.

The lower-rate environment also contributed to a speculative bubble in the Borsa Istanbul Stock Exchange (BIST) as investors searched for yield on their capital. In an attempt to avoid a major depreciation of the lira in currency markets, Turkish banks began selling off dollar reserves to manipulate the lira exchange rate and are now running on empty. Adding to the monetary and fiscal mismanagement is the global pandemic and supply chain crisis, and that dynamic limited revenue from Turkish exports and collapsed a thriving pre-pandemic tourism industry that was responsible for 12.7% of its GDP.

On Dec. 16, Turkey’s central bank announced a cut in the one-week repo auction rate from 15% to 14%. That was the fourth meeting in a row where it cut interest rates, despite inflation reaching 4x the target rate. Today’s trading of equities, equity derivatives, and debt repo transactions were halted twice within an hour after the BIST fell as much as 7% on concerns that rate cuts will create an uncontrollable inflationary spiral. When trading resumed, the index fell to a 9.1% loss within a few minutes but closed for the day with an 8.5% loss.

The stock market sell-off accelerated the lira’s plunge to a 135% YTD high of 17 liras to the dollar. Real interest rates are falling further below zero, with official annual inflation at 21.3% and independent estimates as high as 58%. The largest banks in Turkey were among the companies leading today’s stock market rout, with shares of both TSKB Bank and Parsan Bank plunging 8.85%. 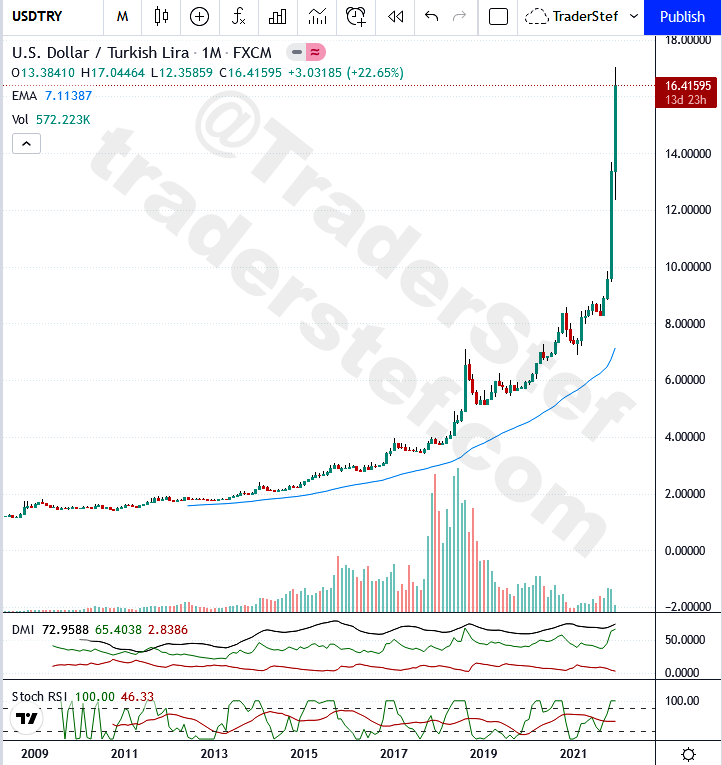 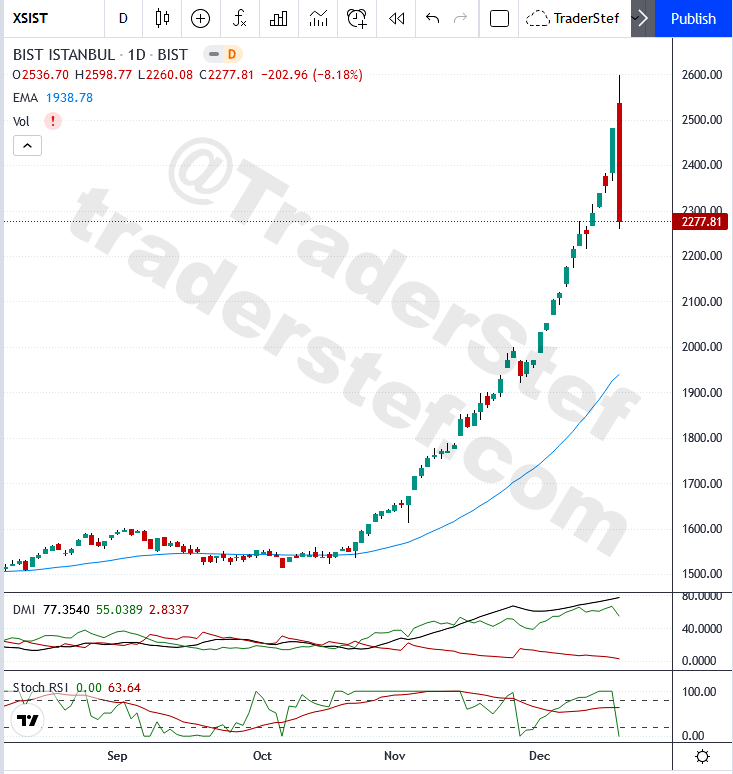 Turkey’s central bank intervention in the currency market today is the fifth time in November it attempted to support the lira. It is estimated that Turkey’s central bank has more foreign currency liabilities than assets, which provides no firepower in the future to try to stabilize its currency. The lira continued to fall in after-hours trading before the weekly close. The collapsing lira makes it likely that Turkey will add more fuel to the fire by implementing capital controls to restrict money from flowing out of the country. The Turkish central bank hinted that it plans to halt further interest rate cuts for the next three months while monitoring the repercussions of its monetary policy decisions.

The Turks are not ignorant about the mechanics of money and are fleeing to the safe haven of gold and silver as a store of value.

Turks Flee to Gold, Bitcoin, and Foreign Currency as Government Devalues Lira… “The rising price of everything is hard to miss when you see it in the groceries, holiday gifts, and the tab at the fuel pump. Inflation isn’t just an American problem… At a time when officials want to squeeze out independent cryptocurrencies and even eliminate anonymous cash, it’s a chilling warning of the danger of giving governments free rein to mess with our money… ‘I had never experienced such a deplorable life. I go to sleep, I wake up and the prices have gone up. I bought a 5-litre can of (cooking) oil, it was 40 lira. I went back, it was 80 lira,’ a widowed mother of two told the AP in November… ‘Turks have traditionally used gold as savings and there may be as much as 5,000 tonnes of it ‘under mattresses’, with more added after the recent buying spree,’ Reuters reported last year even before the currency lost so much of its value. Tellingly, even though Turkish banks accept deposits in both gold and foreign currency, many people avoid them out of fear the government might seize private funds to bail itself out. ‘Smart Turks are keeping their savings at home, whether in gold or FX,’ The National Interest noted earlier this year.” – Reason, Dec. 1

In Turkey, critics say the sultan has no clothes. Erdogan’s advisers won’t tell him… “The autocratic Erdogan – who ascended to power during George W. Bush’s first term as U.S. president – has effectively declared war on financial orthodoxy, throwing fuel on the fire of a currency crisis by lowering interest rates when economists argue he should be doing exactly the opposite: jacking them up to defend the lira.” – Stamford Advocate, Dec. 17

How Bad Can Inflation Be? Turkey Offers a Warning – WSJ, Dec. 17 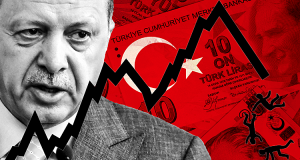