Yellen is Dancing With Bears in the Woods of Monetary Policy

Last week’s FOMC meeting is likely to be the lipstick on a pig moment.  The TaperCaper will continue to its bitter conclusion unless some financial miracle occurs over the next few months, which is highly unlikely.

Regarding the stock market, it could do a “Rocket Man” and soar due to hyperinflation at some point, but not until after a crash so the Fed can put a lead foot back on the QE pedal.  I have stated on many occasions that all the data is bad.  It is so bad that the Fed is ignoring it and restating old platitudes, like “transitory” and “slack.”  They’re in the mode of forget all of it, discontinue some data charts, throw out the models, and let’s wing it!  Will QT be the greatest Hail Mary pass of all time?  Nothing looks good geopolitically, economically, or domestically. With the bear kissing Yellen’s hand in mind (image courtesy of @VICTORLEONARDIB), today’s post is a link garden of video and article goodies to consider for your reading pleasure.  Welcome to the Twilight Zone, savvies.

Got your gold and silver?

“After spending many years in Wall Street and after making and losing millions of dollars I want to tell you this: It never was my thinking that made big money for me. It was always my sitting.” – Jesse Livermore, Reminiscences of a Stock Operator 1923 (Free PDF Book)

VIDEO: Janet Yellen’s Plan to Stay – “Feds says they’re going to be ‘non-data dependent’ on implementing Quantitative Tightening.  That tells me they might get up to the run rate… and what if… to show the market that they have the discipline to exit, so it’s ok for us to re-enter… this could well be a set-up… (as per) Kenneth Rogoff’s paper released very recently said Central Banks around the world should be preparing for Negative Interest Rates (NIRP) and more Quantitative Easing” – DiMartino Booth, Sept. 21

Infographic: The Everything Bubble is Ready to Pop… “It wasn’t always this way. We never used to get a giant, speculative bubble every 7–8 years. We really didn’t.  In 2000, we had the dot-com bubble.  In 2007, we had the housing bubble.  In 2017, we have the everything bubble.” – John Mauldin Economics, Sept. 19

The Federal Reserve is Peddling Tinker Bell Economics… “The Fed is waiting for wages to push up prices, but that’s not about to happen” – MarketWatch, Sept. 19

The Fed Balance Sheet – It’s Not Going to Shrink… “Regardless of what the Fed has to say, they’re not going to do anything. Or, if they do anything, it’s simply going to be to create the impression that they’re doing something – that they’re going to follow through with their plan. But nothing is going to happen, because before they get even a tiny fraction of the way, they’re going to have to reverse course, because they’re not going to allow interest rates to spike. They’re not going to let the entire phony house of cards economy collapse, except to the extent that they might allow a little bit of a collapse to make Trump look bad. So, that may be the needle they’re trying to thread.” – Peter Schiff, Sept. 19

This Fed is on a Mission… “Even hurricanes won’t push the Fed off track: Hurricanes Harvey, Irma, and Maria have devastated many communities, inflicting severe hardship. Storm-related disruptions and rebuilding will affect economic activity in the near term, but past experience suggests that the storms are unlikely to materially alter the course of the national economy over the medium term.” – Wolf Street, Sept. 20

“Exactly how many warnings do you need before you figure out that something bad is about to happen?… 1) Investor Confidence 2) All Hat, No Cattle 3) Valuations 4) Share Buy Backs” – Lance Roberts, Sept. 21

QT1 Will Lead to QE4. The Economy is Slowing… “Even without any action, retail sales, real incomes, auto sales and even labor force participation are all declining. Every important economic indicator shows that the U.S. economy is slowing right now. When you add in QT, we may very well be in a recession very soon. Because they’re getting ready for a potential recession where they’ll have to cut rates yet again. Then it’s back to QE. You could call that QE4 or QE1 part 2. The Fed has essentially trapped itself into a state of perpetual manipulation.” – Jim Rickards, Sept. 21

Stupidity Well Anchored: Absurdity of Inflation Expectations in Graphic Form… “No Reliable Measures: There is no single highly reliable measure” of longer-run inflation expectations, Fed Governor Lael Brainard told The Economic Club of New York on Sept. 5.  Lovely.  She’s also correct. Yet, she proposes to know what to do about it! How idiotic is that? – Mish Shedlock, Sept. 21

Here’s why I’m betting against the Fed’s decision to unwind economic stimulus… “The Fed’s announcement amounts to switching from the largest extended money-printing exercise in history to the largest extended money un-printing exercise in history. Neither they nor we know exactly how it is going to work because it has never been done before. But we do know the numbers are huge. And the net effect on the economy is pain — higher interest rates, lower growth, lower stock and bond prices. The question is how long they will stick with the program as the pain level rises. Here are a few things to think about:” – CNBC, Sept. 21

Yield Curve Flattens Dramatically, Looking Quite Recessionary…“Chart is as of the end-of-day on September 20 following the interest rate and balance sheet reduction announcement by the FOMC.” – Mish Shedlock, Sept. 21 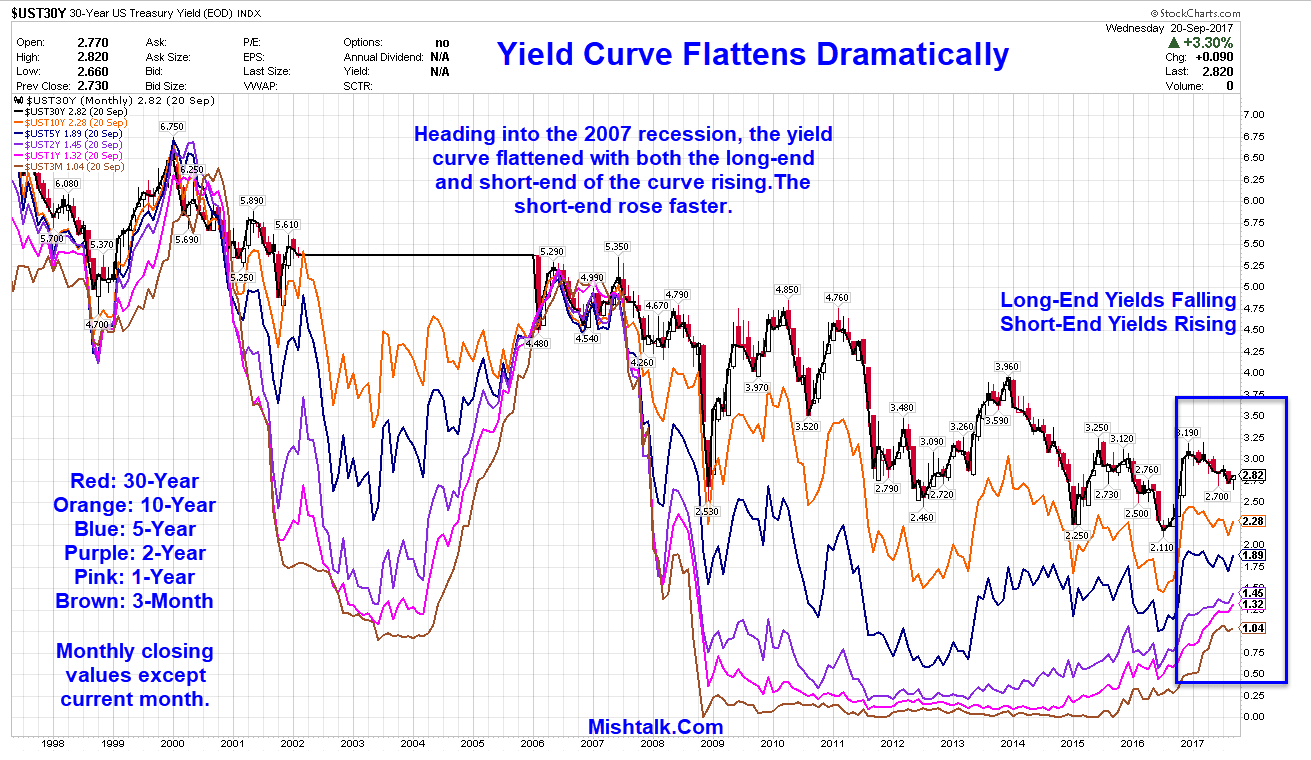 “Unfortunately, what the Federal Reserve is quickly realizing is they have become trapped by their own ‘data-dependent’ analysis. Despite ongoing commentary of improving labor markets and economic growth, their own indicators have continued to suggest something very different. Now they are simply considering abandoning those tools… Will this ultimately lead to a policy misstep the disrupts the financial, and most importantly, the credit markets? Definitely. Why do I say that?  Because there have been absolutely ZERO times in history that the Federal Reserve has begun an interest-rate hiking campaign that has not eventually led to a negative outcome… I believe, the Fed understands that economic cycles do not last forever, and we are closer to the next recession than not.  While raising rates will accelerate a potential recession and a significant market correction, from the Fed’s perspective it might be the ‘lesser of two evils. Being caught near the ‘zero bound’ at the onset of a recession leaves few options for the Federal Reserve to stabilize an economic decline.” – Real Investment Report, Sept. 22 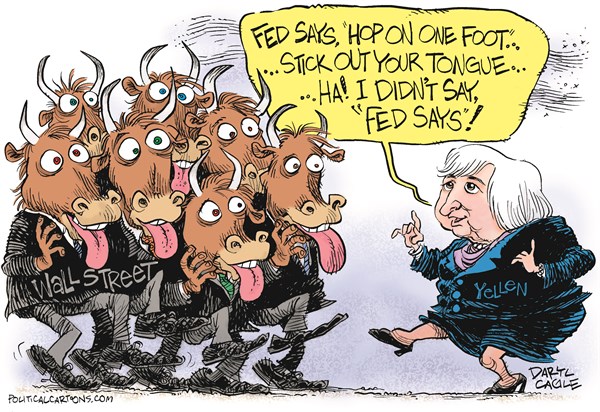