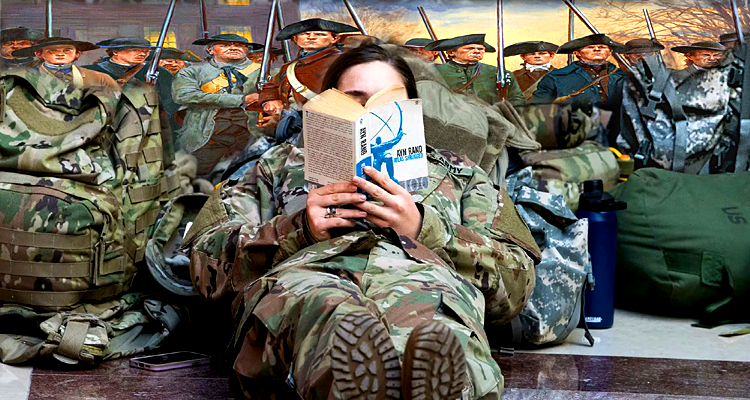 A photograph taken by Tom Williams of Getty Images was circulated through various media platforms last week. Unfortunately, it was met without fanfare due to its significance and what it ultimately represents. The image is of a solitary female National Guard soldier resting upon a marble floor in Capitol Hill as she reads the last novel written by Ayn Rand. I overlaid that photo with colonists from the American Revolution for today’s header.

Ayn was a Russian-American novelist, philosopher, playwright, and screenwriter who is responsible for a philosophical system called Objectivism, which is a major influence on the conservative and libertarian party and justifies their political views. “Atlas Shrugged” (1957) was Ayn’s final work of fiction and is a dramatization of her unique vision of existence for man’s highest potential. The book took twelve years of her life to complete and is considered her magnum opus.

Atlas Shrugged – You Still Have Time

Memoir and Official Correspondence… “‘They were men that had not learned the art of submission, nor had they been trained to the art of war. But our astonishing success taught the enemies of liberty that undisciplined freemen are superior to veteran slaves.’ As an afterword to the letter, Stark included a brief passage to be read as a toast to the veterans: ‘Live free or die. Death is not the greatest of evils.’” – General John Stark (1809), New England Living

Defiance over “taxation without representation” lit the fuse for the Boston Tea Party in December of 1773, then the British Parliament passed the Coercive (aka Intolerable) Acts in 1774. The provisions within the Acts were offensive to Americans and was an obvious punishment doled out by the King of England. It became clear that the British might deploy its army in the near future and that realization augmented a plan to prepare for armed resistance if necessary.

“Whenever destroyers appear among men, they start by destroying money, for money is men’s protection and the base of a moral existence. Destroyers seize gold and leave to its owners a counterfeit pile of paper. This kills all objective standards and delivers men into the arbitrary power of an arbitrary setter of values. Gold was an objective value, an equivalent of wealth produced. Paper is a mortgage on wealth that does not exist, backed by a gun aimed at those who are expected to produce it.” – Ayn Rand

The colonists in Lancaster County, Pennsylvania, determined “That in the event of Great Britain attempting to force unjust laws upon us by the strength of arms, our cause we leave to heaven and our rifles.” A South Carolina newspaper essay that was reprinted in Virginia, urged that any law that had to be enforced by the military was illegitimate.

“Do not open your mouth to tell me that your mind has convinced you of your right to force my mind. Force and mind are opposites. Morality ends where a gun begins.” – Ayn Rand

The Royal Governor of Massachusetts, General Thomas Gage, only allowed town meetings to take place once per year. When he tried to break up an illegal town meeting in Salem by deploying Redcoats, roughly 3,000 armed colonists arrived and the Redcoats retreated. Gage was informed that the entire population who were 16-years of age or older owned a firearm and a pantry of gunpowder. Since Gage only had 2,000 Redcoats in Boston and realized he was outnumbered by an armed population, his first option was to deprive the colonists of gunpowder.

Contemporary gunpowder remains stable in almost all conditions vs. the more volatile “black powder” in the eighteenth century. For that reason, large quantities of black powder were usually stored in a town’s “powder house” that was built with reinforced brick walls. Powder houses stored large reserves for individuals, merchants, and local militias.

Colonial law usually required militiamen and households to have their own firearm with a minimum amount of powder, but not everyone was able to afford it.  Therefore, local governments would sometimes supply “public arms” and powder to the militia. The rules varied on whether militiamen with public arms were allowed to keep them at home and were often stored in a special armory or powder house.

“We are fast approaching the stage of the ultimate inversion: the stage where the government is free to do anything it pleases, while the citizens may act only by permission; which is the stage of the darkest periods of human history, the stage of rule by brute force.” – Ayn Rand

On September 1, 1774, 260 of Gage’s Redcoats sailed up the Mystic River and confiscated hundreds of barrels of gunpowder from the Charlestown powder house. That event became known as the “Powder Alarm” in New England and was considered a serious provocation by the British. Within one day, 20,000 militiamen organized and marched towards Boston. As rumors spread through Connecticut and Massachusetts that there was fighting in the streets of Boston, the marching militia had reliable intelligence that the rumors were untrue and the war did not commence in September. That did not dilute a clear message that the British would use force to seize their arms and powder. The colonists considered such seizures as an act of war and would fight to retain their right of self-defense and freedom from tyranny.

“A government is the most dangerous threat to man’s rights: it holds a legal monopoly on the use of physical force against legally disarmed victims.” – Ayn Rand

Five days after the Powder Alarm, the militia in Worcester County gathered on the Worcester Common as the Worcester Convention took over the reins of government, and ordered the resignations of all militia officers that received their commission from the Royal Governor. The officers resigned and received new commissions from the Worcester Convention. At the same time, the folks of Suffolk County that included Boston, adopted the “Suffolk Resolves.” The 19-point document focused on complaints over the Powder Alarm and took control of the local militia away from the Royal Governor. The militia also scheduled group practice with firearms once a week.

The First Continental Congress, which had just assembled in Philadelphia, unanimously endorsed the Suffolk Resolves and urged all the colonies to send supplies to help the Bostonians.

When the Massachusetts Assembly convened, General Gage declared the gathering illegal. They reassembled as the “Provincial Congress,” and on October 26, 1774, they condemned military rule and criticized Gage for “the unlawful seizure of ammunition from the arsenal at Boston.” The Provincial Congress asked for all militia companies to organize and elect their own officers and that 25% of them (aka the Minutemen) were to “equip and hold themselves in readiness to march at the shortest notice.” It was also declared that everyone who did not already have a gun should get one, and start practicing diligently.

“Run for your life from any man who tells you that money is evil. That sentence is the leper’s bell of an approaching looter. So long as men live together on earth and need means to deal with one another–their only substitute, if they abandon money, is the muzzle of a gun.” – Ayn Rand

If you were not familiar with the true story behind our inalienable Second Amendment right, now you understand it has absolutely nothing to do with hunting. The right to bear arms is right up there with no taxation without representation when assigning blame to the patriots’ motivation for the American Revolution.

Increased Gun Sales ‘Don’t Fit the Caricature’ of a Typical Owner… “21 million guns sold in 2020… The vice president of marketing for gun store Brownells, Ryan Repp, told Varney &Co. on Monday that based on their sales, 40% of new gun owners are women and African Americans are the ‘largest growing group’ with an increase of 58% from the year before.” – Fox Business, Jan. 4

“Joe Biden promises to ‘defeat the NRA.’ Kamala Harris screams, ‘the NRA has got to go.’ Anti-gun politicians, activists, and the media demonize our millions of members. We will never let them take our guns. Let’s keep fighting and show them who we are. – NRA, Jan. 18

In case you missed them, consider reading the following articles on today’s topic.

Gun Sales Might Spike as an Inept Capitol Hill Desecrates the Constitution… “Abandoned, rejected, and repealed legislative efforts from the past will rise from the graveyard.” – TraderStef, Dec. 2018 (Twitter thread)

Live Free or Die… “Is a blunt declaration of truth in the eyes of a crime victim or veteran from any battle you choose.” – TraderStef, Dec.12, 2020 (Twitter thread) 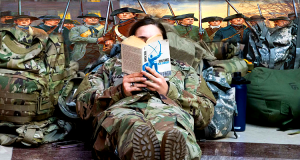