Are you tired of the boring 1988 Economist magazine cover art depicting a new world currency in 2018? Me too, so I gave it a slight overhaul with a golden (pun intended) halo of the sun and Earth in today’s headline graphic. Today is ground zero if you extrapolated the date engraved upon the future coin as prophetic. The truth of the matter is that currency and financial system resets occur over a period of time, then a D-Day eventually comes to pass upon the peasantry. The great financial crisis that transpired ten years ago was a financial system reset slow train wreck, and D-Day culminated over a weekend with the Lehman Brothers collapse decision at the NYFRB.

As a primer to the leading up of a potential reset, or a reset to avoid another salvage operation that does not fix underlying issues, consider reviewing Three (Four) Bankers of a Financial Armageddon Salvage Operation, published on Sep. 14. The reset topic came up at the end of my interview with Dr. Dave Janda this past weekend without much time to expound on it, so the following are my humble two cents. I do not know how or when it will come to fruition, but we can peek into the whys and roads that are building to facilitate it.

Here is a flow chart of sorts that lays out the backbone of our current financial order of core players, as I understand them to be. More entities can be added, but this synopsis serves the purpose. A portion of the following information incorporates insights covered by Kenneth Storey.

A large amount of press has surfaced about growing risks within the financial markets, despite efforts by several goldilocks power brokers to the contrary, and a few others included among the editorials in the link garden below to add color to the unfolding de-dollarization process.

The role of gold in a multicurrency reserve system – World Gold Council, Jul. 5

BIS warns global economy risks crisis ‘relapse’… “There is little ‘medicine’ left to treat the patient a second time. ‘Things look rather fragile,’ BIS chief economist Claudio Borio told reporters in a conference call. The Basel-based BIS, considered the central bank for central banks, warned in its annual report that the recovery after the 2007-2008 global financial crisis had been ‘highly unbalanced’, with emerging economies especially facing mounting pressure… After years of ultra-accommodating monetary policy, the US Federal Reserve has begun hiking interest rates, while the European Central Bank (ECB) recently announced it would end its stimulus program at the end of this year. But amidst this normalization process, BIS noted a stark divergence between growth in the US market and the situation in emerging economies especially.” – The Business Times, Sep. 25

A Three-Way Train Wreck Is About to Derail the Markets… “Markets have been notably docile lately despite crises in Argentina, Turkey, Indonesia, Iran, China, Venezuela and elsewhere. Political crises related to Brexit and U.S. political dysfunction have not roiled global markets so far. The calm and low volatility are about to end. The China-Iran nexus in confrontation with the U.S. is the last straw.” – Jim Rickards at The Daily Reckoning, Oct. 1

Chairman of the Economic and Development Review Committee at the OECD: Bad Financial Moon Rising… “In reality, all is not well beneath the surface. Should another financial crisis materialize, the subsequent recession might be even costlier than the last one, not least because policymakers will face unprecedented economic and political constraints in responding to it.” – Project Syndicate, Oct. 3

World economy at risk of another financial crash, says IMF… “Debt levels are well above 2008 and failure to reform banking system could trigger crisis – ‘large challenges loom for global economy to prevent a second Great Depression’” – The Guardian, Oct. 3

The global economy not looking quite as rosy, IMF says…“International Monetary Fund cuts growth forecast for this year and next and said downside risks are now elevated” – MarketWatch, Oct. 9

Chinese currency set to explode internationally as IMF formally places it in the SDR’s basket of currencies… “The IMF had already announced the acceptance of the Yuan into their monetary reserves more than two years ago, but this week the currency became fully adopted and on equal par with the dollar, euro, pound, and yen… China has also been given sole authority to sell IMF (SDR) bonds, which when coupled with the fact that they are already the world’s largest banking entity means that transitioning the RMB into an international settlement currency is now just a mouse click away for Beijing…” – Shotgun Economics, Oct. 8

*TRUMP SAYS HE DOESN’T LIKE WHAT THE FED IS DOING – Oct. 9

Turkish President Erdogan calls on African countries to use local currencies for trade and businesses with Turkey – “dependence on USD dollar is becoming more of a burden instead of a convenience.” – China Xinhua News, Oct. 10

The following list of circumstances is priming the pump for a currency reset scenario. A majority have already taken place to some degree, are ongoing, or are in the process of surfacing and are not listed in any particular order, although some require another for implementation with reason.

√ The consolidation of and creation of currency blocks (i.e. EUR within the European Union)

√ U.S. drains the swamp and attempts are made to roll back the globalist agenda

√ U.S. demands the world fund its fair share of U.N., NATO, and war on terror expenses

√ U.S. reduces or eliminates aid to foreign countries and organizations 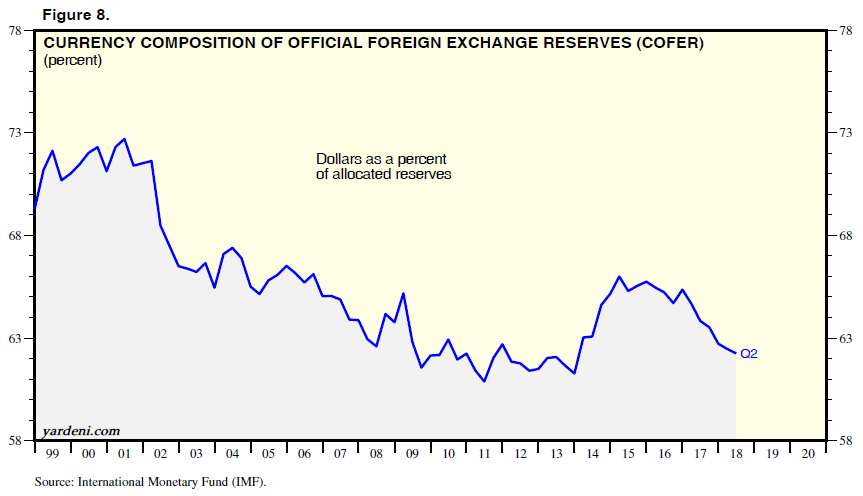 √ Yuan and IMF SDRs increase in use as reserve currencies

√ Sanctions, tariffs, and trade wars escalate with some resolution

√ E.U. and Japan begin QT w/o QE or increase of cash in circulation

√ Global oil and gold to be priced in SDRs, USD, yuan

√ EURO dollars and petrodollars replaced by SDRs flow back to U.S., causing inflation

√ IMF adjusts SDR basket, with the yuan having a larger percentage leading to being on par

A liquidity crisis beyond the central banks’ ability to subdue a total blowout could force an injection of SDRs by the IMF. A debt jubilee restructure of sovereign debts prior to a liquidity crisis would help ward off the worst of consequences but would take place anyways post-crisis to facilitate the restructuring of existing debt and monetary systems. A new world currency (backed by what as a guarantee?) and multi-reserve system will surface for international trade and settlements. The Federal Reserve would eventually liquidate, while a new U.S. Treasury notes system is implemented and a domestic USD backed by gold and/or silver could replace current Federal Reserve notes. No matter the outcome, an upward revaluation in the price of gold is highly likely.

Since the formation of the Federal Reserve and IRS in 1913, the USD has depreciated by a stunning 95%. 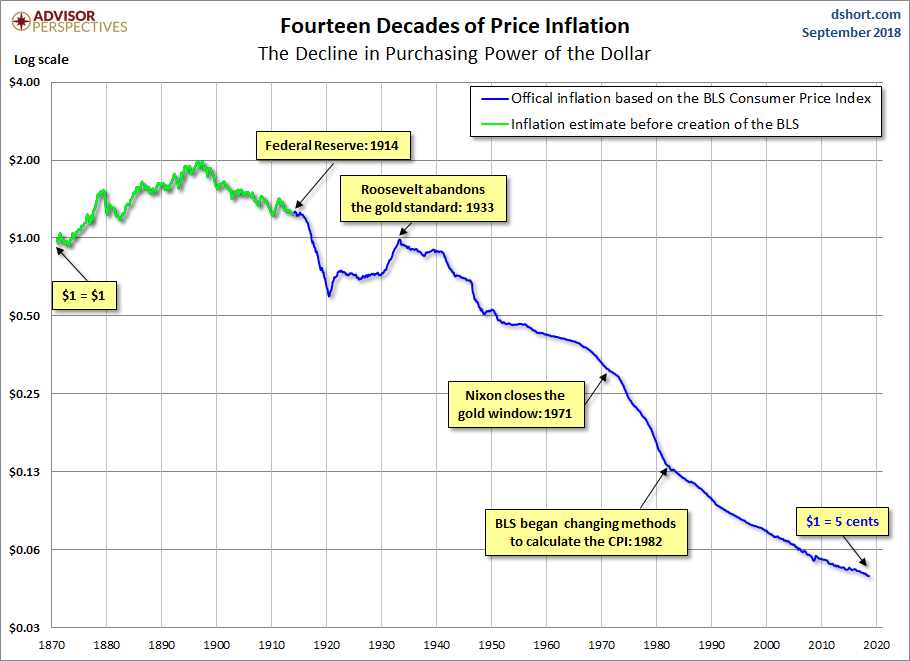 It is unlikely that the power brokers who formulated the Bretton Woods Agreement in 1944 following WWII expected the USD to dominate the global reserve forever, but it is difficult to ascertain a forward-looking mindset dominated by a Keynesian Economics theory. In the U.S. alone, monetary standards have shifted many times since 1770, with the Nixon Shock in 1971 as a standout that ended the ability to exchange USD for gold as set forth at Bretton Woods. 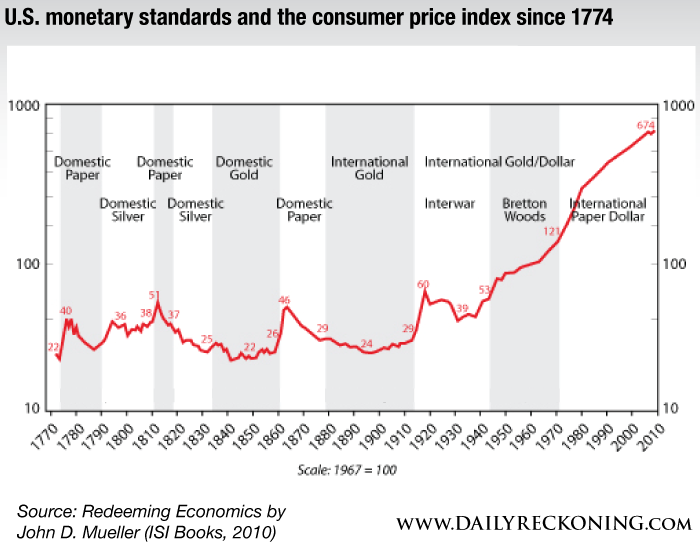 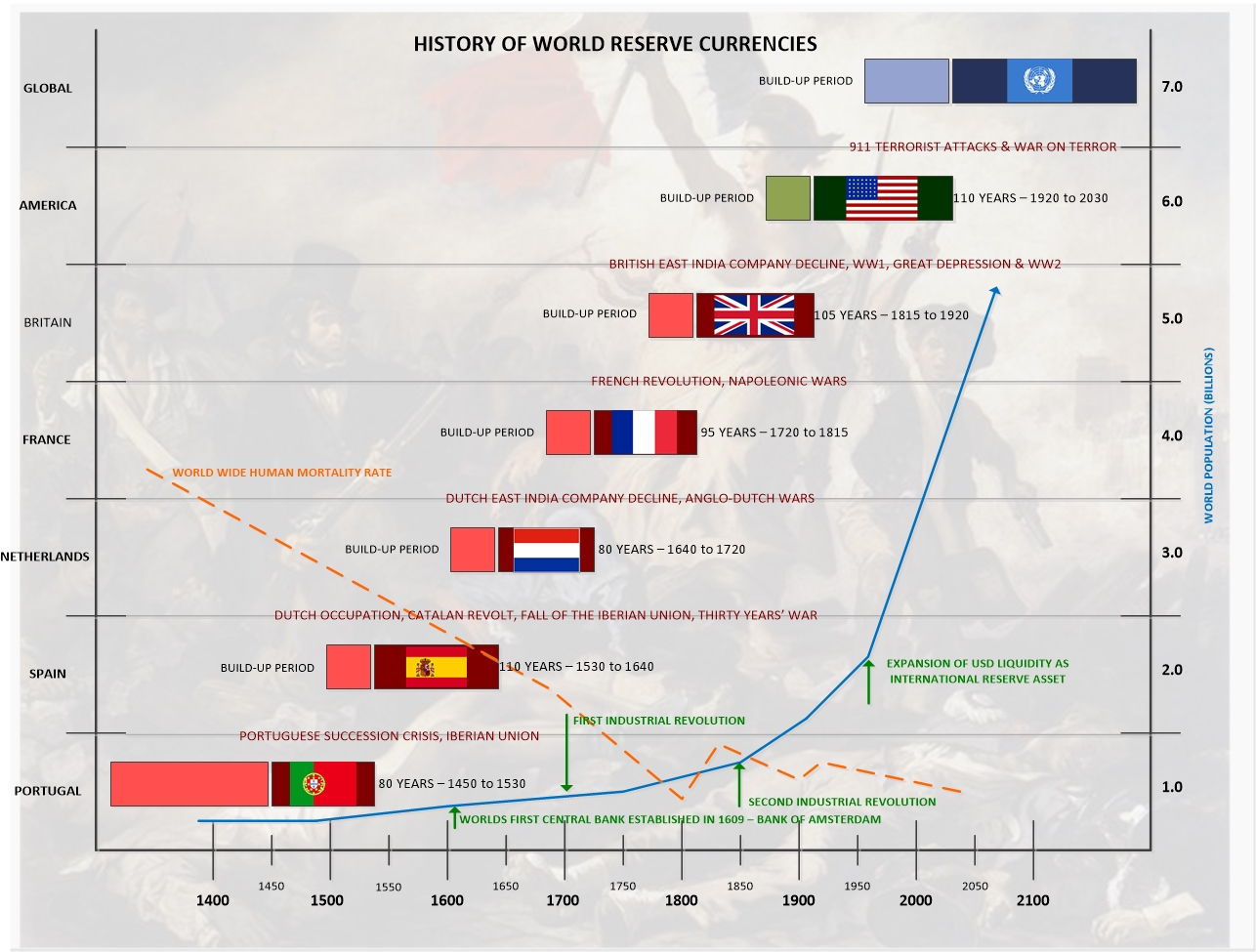 Because of U.S. fiscal and monetary mismanagement, the Bretton Woods financial system collapsed and was a key factor that influenced Europe to form a monetary union and launch of the euro in 1999. U.S. debt is currently over $21 trillion and growing daily, and it does not include $200+ trillion in unfunded liabilities. In 2011, Standard & Poor’s downgraded U.S. sovereign debt for the first time, from AAA to A, and the U.S. Treasury’s printing press continued unabated with a USD “exorbitant privilege” intact. Fast-forward to present day and financial pundits such as Jeffrey Sachs believe that “America’s monetary stewardship has stumbled badly over the years, and Trump’s misrule could hasten the end of the dollar’s predominance.”

The lack of sound fiscal and monetary policy telegraphs to the world that nothing has changed, with China and Russia taking the lead by diversifying their foreign reserves and taking decisive measures to reduce their dependence upon the USD hegemony. The USD still accounts for approximately 85% of all forex transactions, despite making up only 25% of the world economy.

Winds of change are blowing, and it would be foolish to focus on the when and whys for a global currency reset event. The global debt bomb is chiming in at $250 trillion and counting. It would be prudent to prepare your financial house ahead of time, rather than finding yourself in this casino situation with your capital crushed through inflation and devaluation and seeing access to safe haven assets are sparse and priced beyond your means when you need them the most while the house wins. 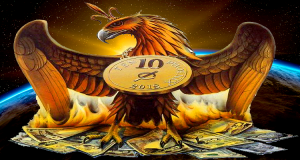