Gold and Silver Bullish Despite the Presstitutes – Technical Analysis

The trolls and presstitutes who pollute the precious metals arena were likely confused about how gold and silver could possibly rally after a suspected Plunge Protection Team (PPT) stock market event this past week. Despite a lack of any factual evidence that an intervention occurred within equities or the precious metals, a handful of hardcore conspiracy hacks may have wasted precious minutes of your time this week. The folks on Main Street I speak with are hungry for realistic, actionable analyses and are thoroughly bored with manipulation clickbait and regurgitated Fedspeak.

ICYMI, here is the official public relations note provided by the Secretary of the Treasury, Steve Mnuchin: 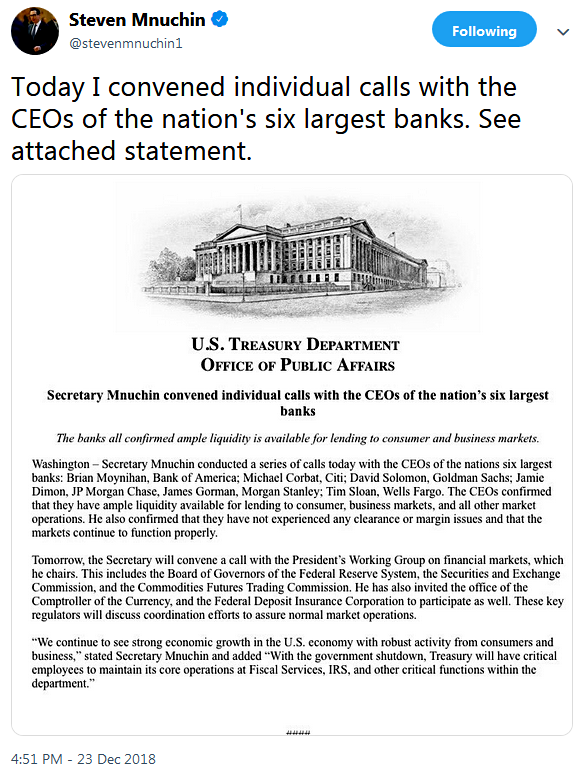 The PPT had a meeting about recent market volatility. Thank goodness they did!  Remember Aug. 2009, when Jim Cramer had his famous meltdown on live television while pleading for the Federal Reserve to pick up the phone and call systemically important financial institutions during the run-up to The Great Recession? If I was at the Fed or Treasury Department today, what would keep me up at night and is worthy of a PPT topic is the deterioration of the USD as a global reserve currency, not manipulating gold or silver.

Speaking of the USD (aka Petrodollar), a rumor is floating that silver will not rally until oil does. The following chart compares the price of silver vs. oil over the past 28 years. There are intermittent lapses without correlation, but the long-standing divergence since Jun. 2016 is different this time. If you think waiting for oil to rally is the strategy for playing a silver bull, you might be thrown off and miss the bus. 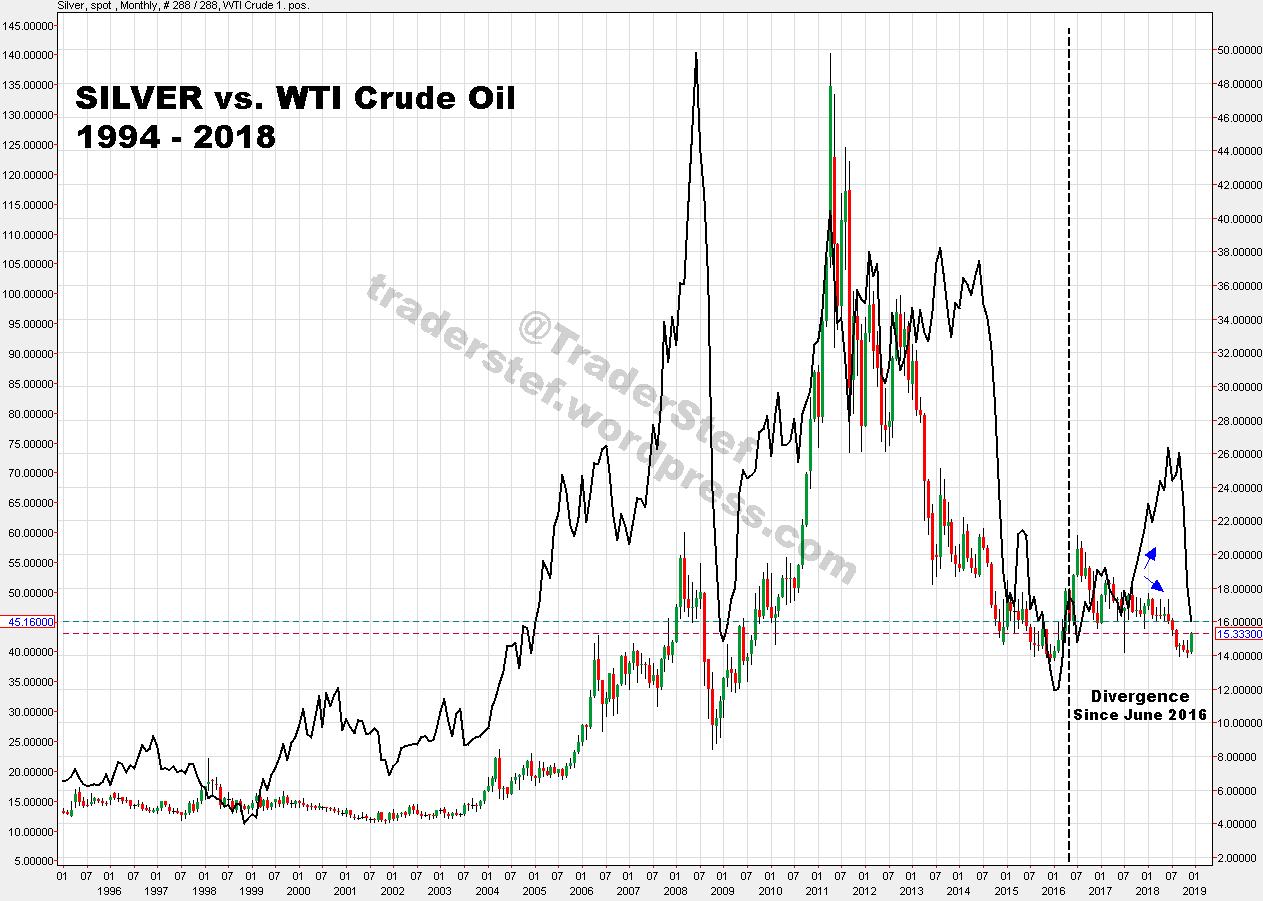 With the U.S. emerging as the world leader in oil production, that is the primary reason for a shift in its price dynamic in relation to other assets.  Consider reading an article I penned in Jan. 2018, “A Return of the Black Gold Rush,” along with its ongoing Twitter thread.  Here are two additional charts on oil production. The red arrows signify Jun. 2016. 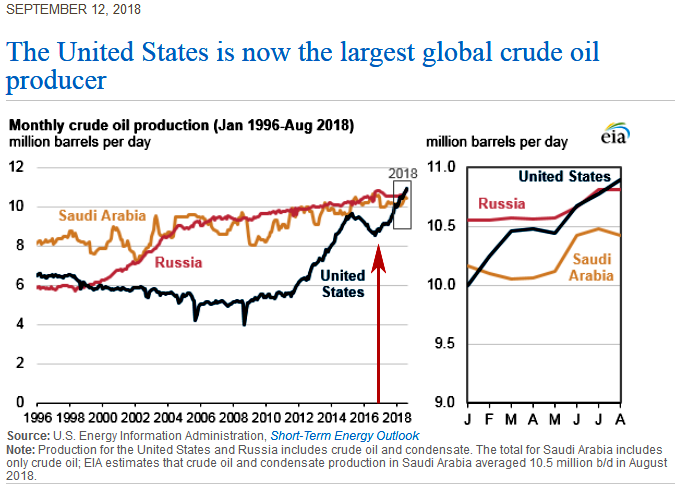 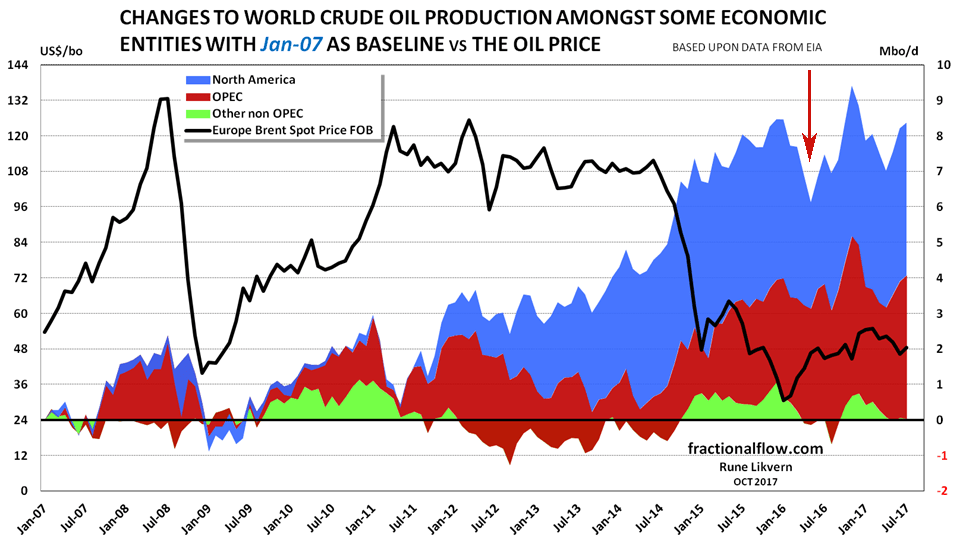 One final item before we move on to technical analyses of gold and silver is a Fox Business “Bulls & Bears” segment that pivots off Steve Mnuchin’s comments about automated trading. Unfortunately, they fall into the sinkhole of artificial intelligence, algorithms, high-frequency trading, and automated platforms without offering any solution. IMHO, a start would be fusion analysis with a focus on charts to assist with your investment decisions. 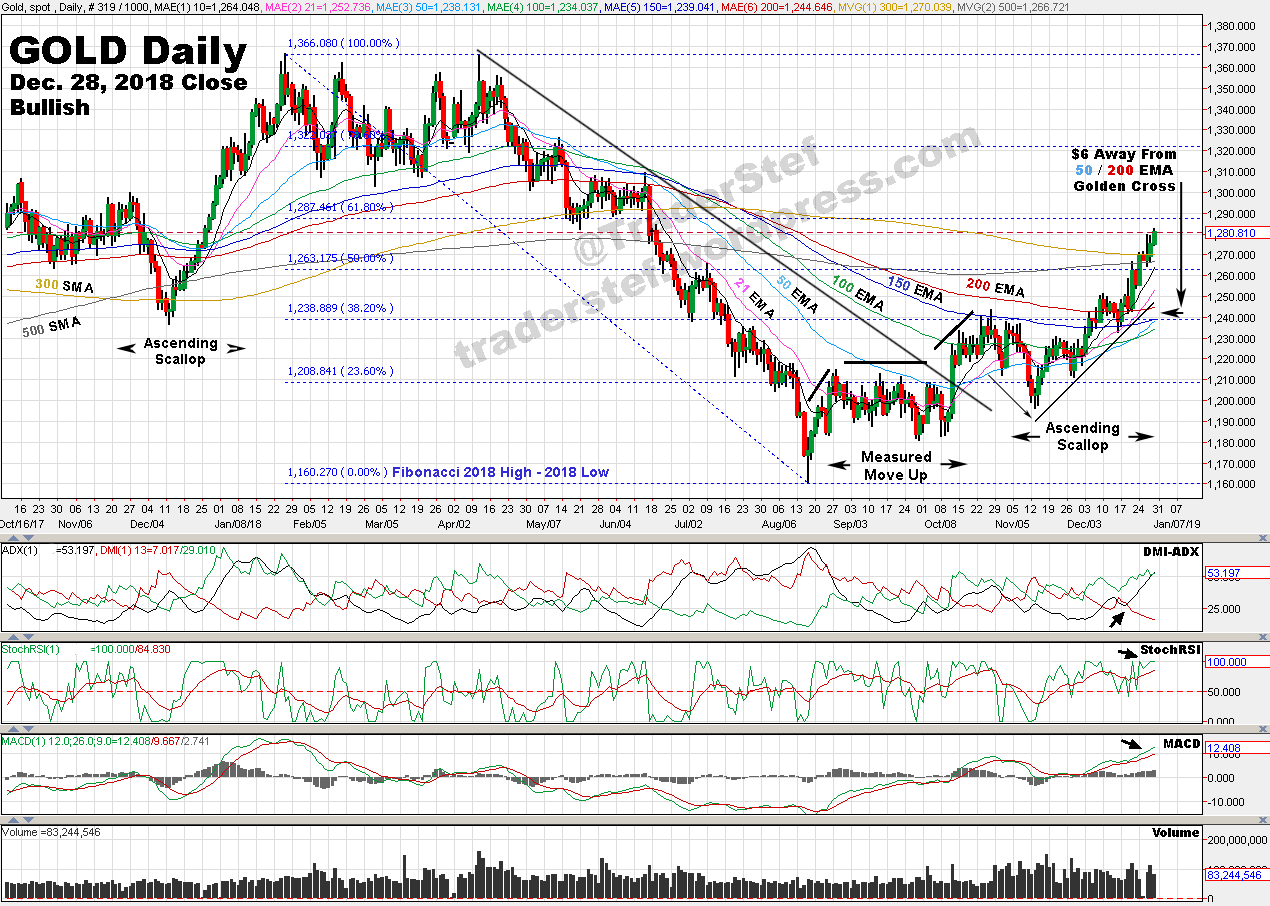 “I suspect that short of a gold positive or negative news item, the price will remain stable until the FOMC meeting announcement on Wednesday.  Following the FOMC, we have the potential for a government shutdown over the weekend. I remain neutral on price until the $1,251 high is taken out with conviction on the price and volume.” 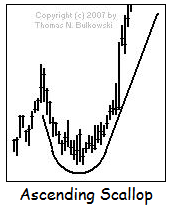 When the price broke away from congestion at the 200 Exponential Moving Average (EMA) and 38.2% Fibonacci level on Dec. 20, it quickly rose to a $1,281 close on Dec. 28. That was a nice $30 sweet spot – momo play opportunity.  The spike in price has introduced an Ascending Scallop pattern out of a Measured Move Up.  A price target can be calculated when a Throwback (aka handle) occurs as a shallow reversal in price.  A Throwback might take place as we approach the 68.2% Fibonacci level, where several layers of lateral resistance are located due to the price chop from Feb. through Jun.  The studies are flashing bullish, as all the moving averages are below the price, the DMI-ADX momentum is strong with an Alligator Tongue set-up, the StochRSI is toppy but can remain there until a Throwback occurs, the MACD is positive, and buy volumes were strong during the rise in price. Keep your eyes on the 50/200 EMAs for a Golden Cross in the near-term. 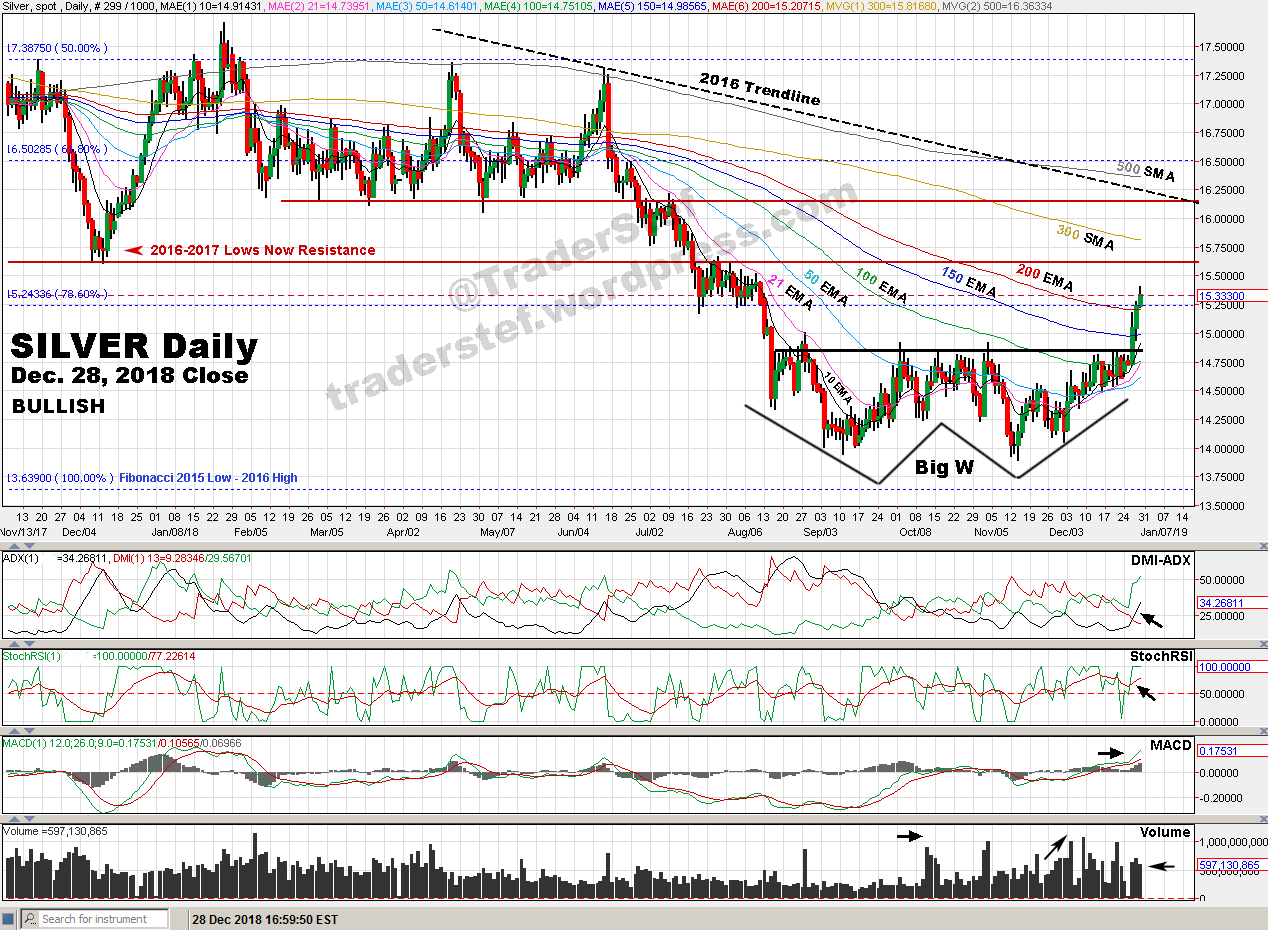 From the Dec. 26 daily chart analysis:

“I have waited for gold to make a solid move beyond $1,250 again, as that would be a signal for silver to break away from its $15 lateral resistance. Silver appears to be making progress in that direction and has an opportunity to catch up to gold’s bull accumulation phase that began in Dec. 2015… the Adam & Eve Double Bottom confirms if $16 is taken out decisively… The Big W candlestick details are clearer on the daily. The lows in late July and the 200 EMA are responsible for stopping today’s price action in its tracks. The DMI-ADX turned positive with conviction and the StochRSI broke out to positive momentum. Note that the volume spikes in Big W’s second half coincide with price spikes. The daily is bullish near-term.”

The silver price continues onward, with a solid close at $15.33 for the week. The bullish Big W pattern (the Eve side of the Adam & Eve Double Bottom drawn back to Dec. 2015) appears to be history, but Adam & Eve does not confirm until all the moving averages and 2016 trendline are taken out with conviction. The break above the 200 EMA only has a $0.13 spread as of the $15.33 close, so a few more dimes to the upside with a solid push above the 2016-2017 lateral resistance would be encouraging.  As with gold, the silver price is approaching several layers of lateral resistance, while the DMI-ADX momentum is strong with an Alligator Tongue set-up, the StochRSI is not as toppy but can remain there until substantial resistance forces a pullback, and buy volumes were strong during the rise in price. The spread for a Golden Cross is $0.45, and outlook is bullish in the near-term.

This one is for the manipulation blabbermouths… BlabberMouf – Wake Up Call

Gold and Silver Bullish Despite the Presstitutes – Technical Analysis

Gold and Silver Bullish Despite the Presstitutes – Technical Analysis by TraderStef