Gold and Silver on a Hot Summer Road – Technical Analysis 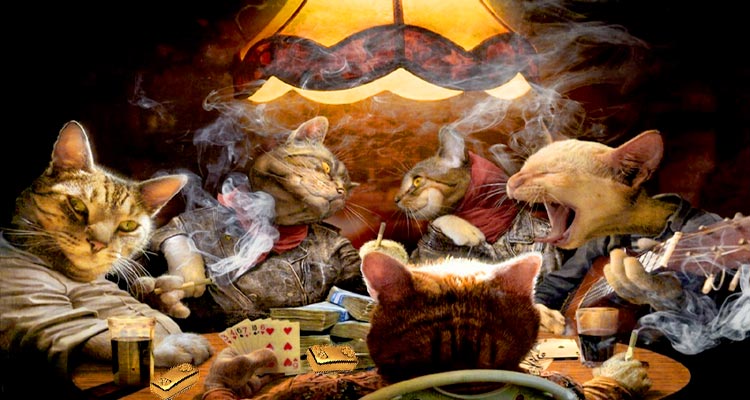 Warmer weather is on our doorstep in the U.S. and precious metals typically have a bull run until late summer or early fall. If you missed it, the “In Gold We Trust” report for 2021 was released this month and I highly recommend that you at least review the chartbook.

Let’s move right to real interest rates, seasonality, the Gold Bugs Index, U.S. dollar, and the recent price action in gold and silver. To view a larger version of any chart, right-click on it and choose your “view image” option.

Gold has had an inverse relationship with negative real interest rates during its bull run since 1999. The price action in gold has consolidated since its Aug. 2020 high, as the 10-year rate experienced a temporary spike before retracing a large chunk of its gains. Subsequently, gold printed a Double Bottom from Mar. to Apr. 2021. Here is a visual of the gold price vs. the real interest rate on 10-year Treasury notes since 2000: 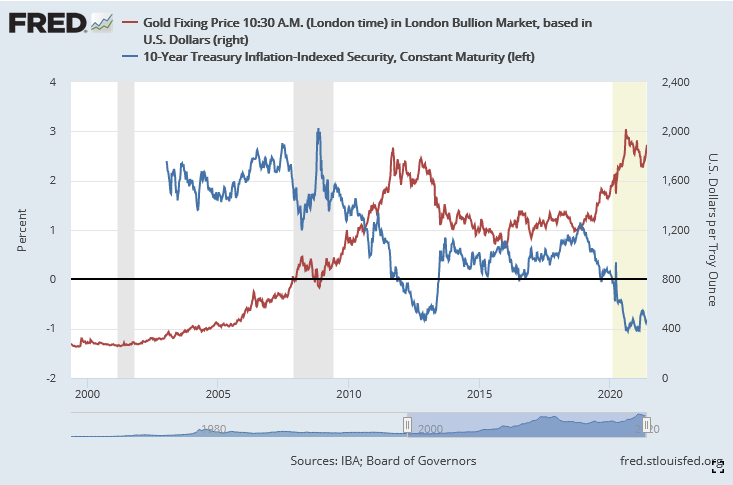 Now is a good time to reflect on a few relevant points that have appeared in the press since last spring.

Video: Economist Stephen Roach issues new dollar crash warning… “Not only does he see growing odds of a double-dip recession, the Yale University senior fellow believes his ‘seemingly crazed idea’ that the dollar would crash shouldn’t be so crazy anymore.” – CNBC, Sep. 2020

Gold Is a Hedge Against Bad Government Decisions… “Many erroneously believe gold is some sort of inflation hedge, because of the 1970s. It’s also not a hedge against stock market crashes. Gold is a hedge on government authorities making poor economic choices. Inflation is usually the result of those poor decisions.” – Bloomberg, Nov. 2020

A 4th-Wave Of COVID-19 Will Push (Nominal) Rates To Zero… “It isn’t over, and financial markets don’t accept that yet. I realize suggesting anything negative about the virus is misanthropic, but the truth matters, and the optics are misleading.” – Real Investment Advice, Feb. 2021

Video: Scott Minerd on rate increases and inflation… “It’s a fool’s game to predict an end to the bull market every time we make a new low in rates.” – CNBC, Mar. 2021 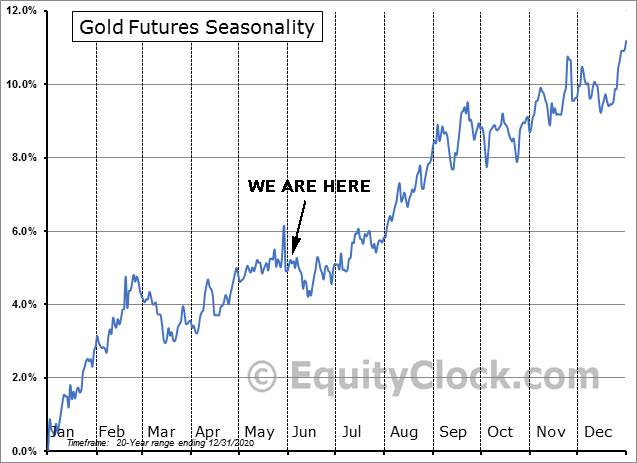 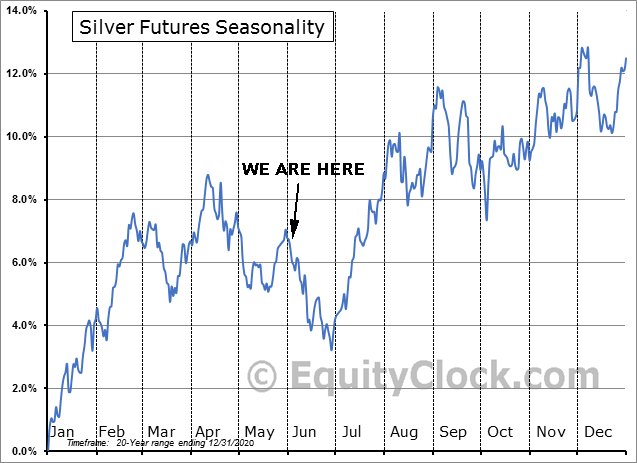 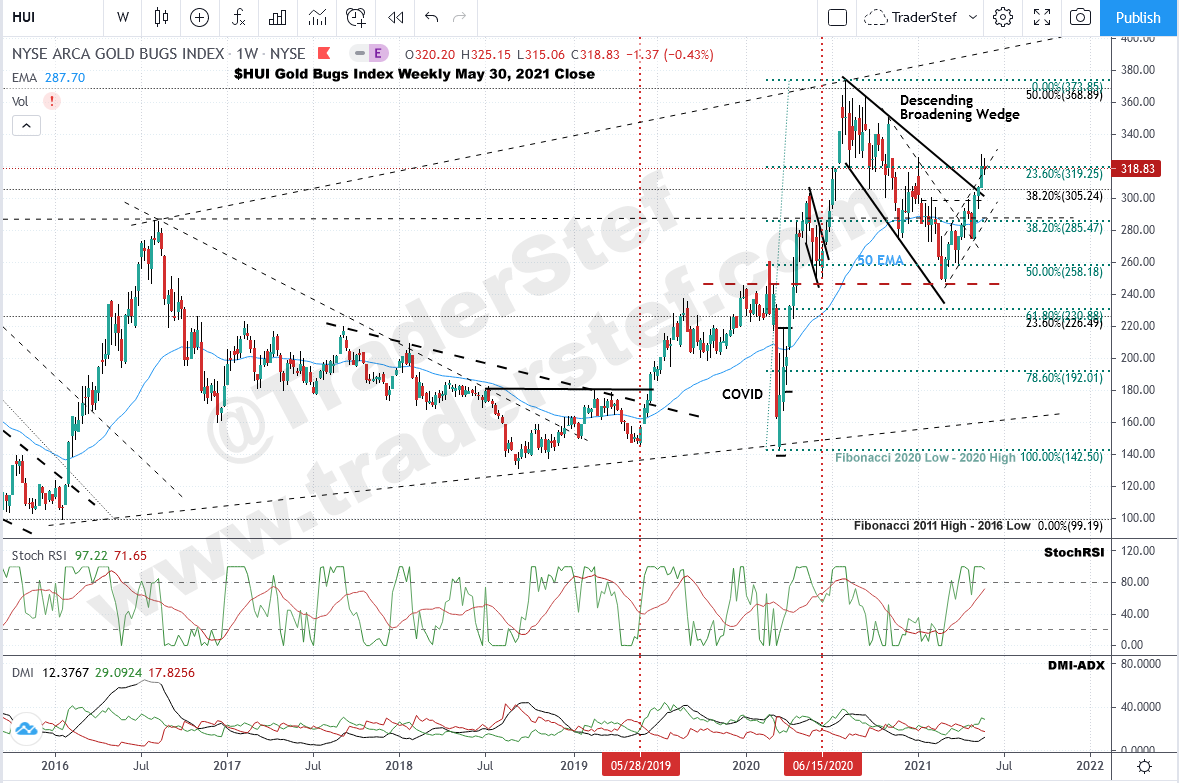 “The HUI is threatening to break out from a Descending Broadening Wedge. The red vertical lines mark the beginning of summer seasonality in 2019 and 2020.”

The HUI is one of the most prominent precious metals indices along with the Philadelphia Gold and Silver Index (XAU). The HUI exclusively tracks gold mining stocks, while XAU includes gold and silver mining companies along with those that hedge their production.

As anticipated in my recent analysis, a breakout from the Descending Broadening Wedge has taken place and mirrors gold’s price action. There are not a lot of significant resistance levels between the current price level of $318.83 and the Aug. 2020 high at $373.85. The DMI-ADX is not in a power trend set up but is almost there, and the StochRSI is nearing an overbought level but may remain there for a while. The 50 Exponential Moving Average (EMA) was decisively taken out during the first week of May and provided momentum to clear the Descending Broadening Wedge’s topside trendline. The chart is bullish and will likely take a breather before attempting a major move this summer. 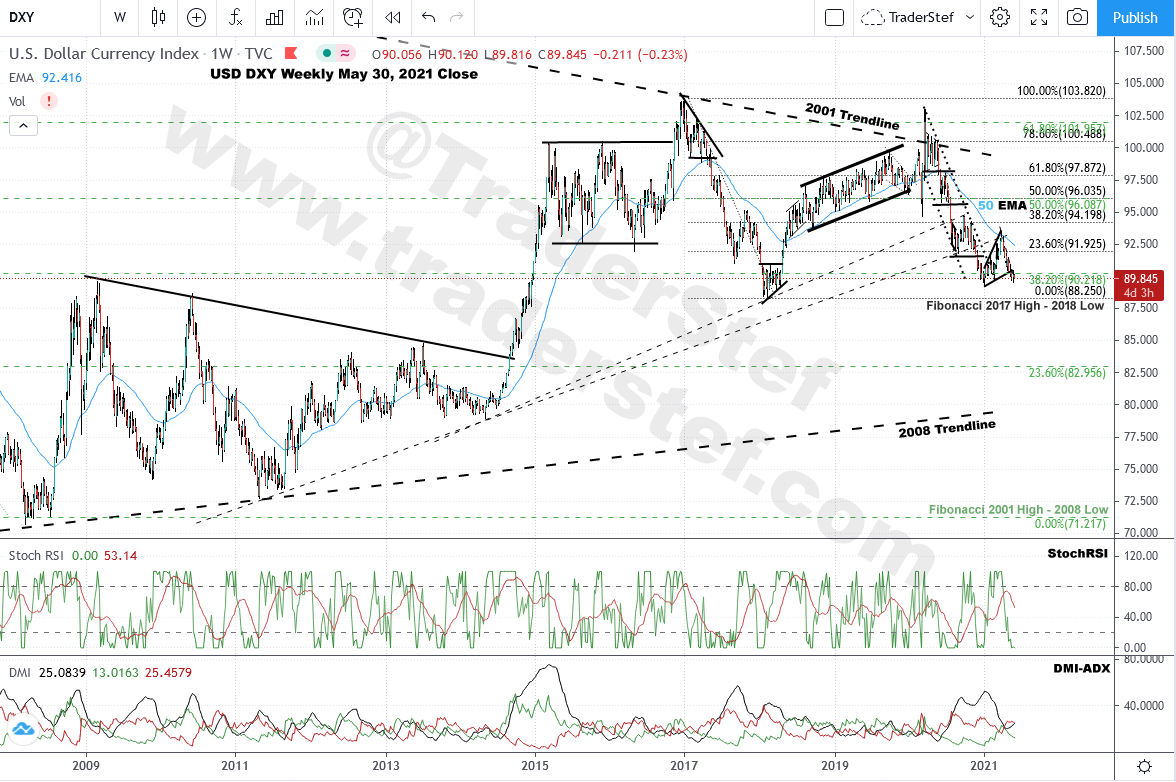 “The pandemic’s Herald Wave arrived on U.S. shores as global equity markets turned volatile before settling into their respective trends. The USD was nearing a new high at 102.99 during the second week of March, then began plunging after the initial lockdown announcements and accelerated through several support levels and moving averages into late May through the end of July. The price action has been chopping between 92 and 95 since August and is now showing the first sign of breaching 92. There are a few immediate support areas that include two Fibonacci levels just above 91… and lateral support drawn back to 2008 that intersects with an 88.25 Fibonacci low from Feb. 2018. This week’s price action has put a bearish 50/200 EMA Death Cross on the table. The DMI-ADX is in a negative momentum trend, the StochRSI appears to be breaking down… The near-term looks bearish.”

A 50/200 Death Cross occurred on the weekly (not shown on the chart above) in early Dec. 2020. The Fibonacci levels down to 90 have been breached and the price action is threatening a break below the 2018 low at 88.25. The dollar chart is looking bearish and support levels are scarce on the way down to 83.

Countries went on a gold-buying spree before coronavirus took hold… “The global economy was flashing danger signs long before the pandemic… and Central banks added the second highest tonnage in 50 years.” – The Conversation, May, 2020

Plenty of gas left in gold’s climb… “An influx of investors increasing their exposure to gold has sent the precious metal’s price to its highest in more than three months, and strategists say there is plenty left in the tank to support further gains.” – Financial Review, May 2021

Central banks turning to gold again… “After a relatively slow start to the year, central banks are taking an interest in gold, which could be an essential support for prices, according to analysts at Commerzbank.” – Kitco, May 2021 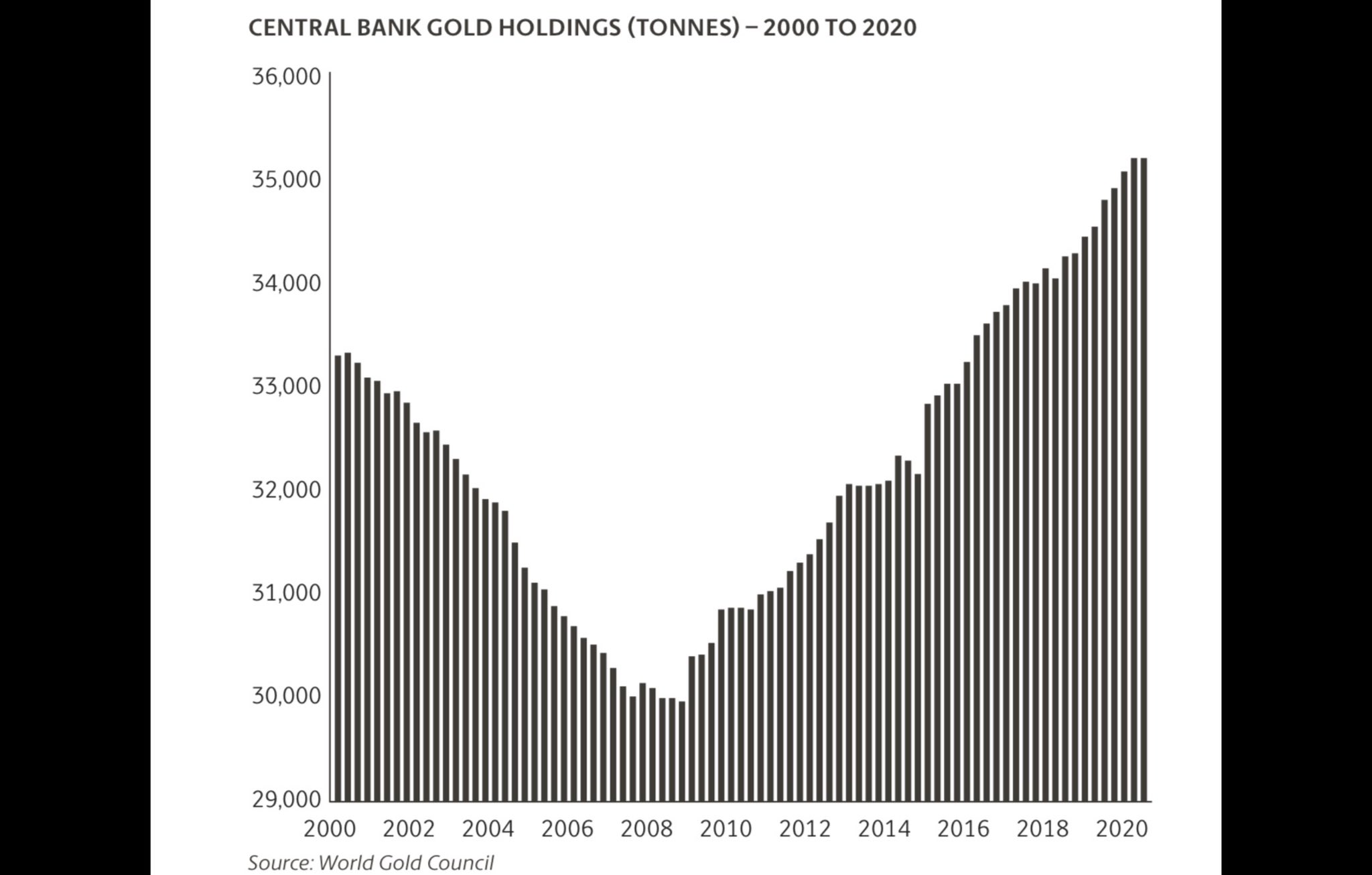 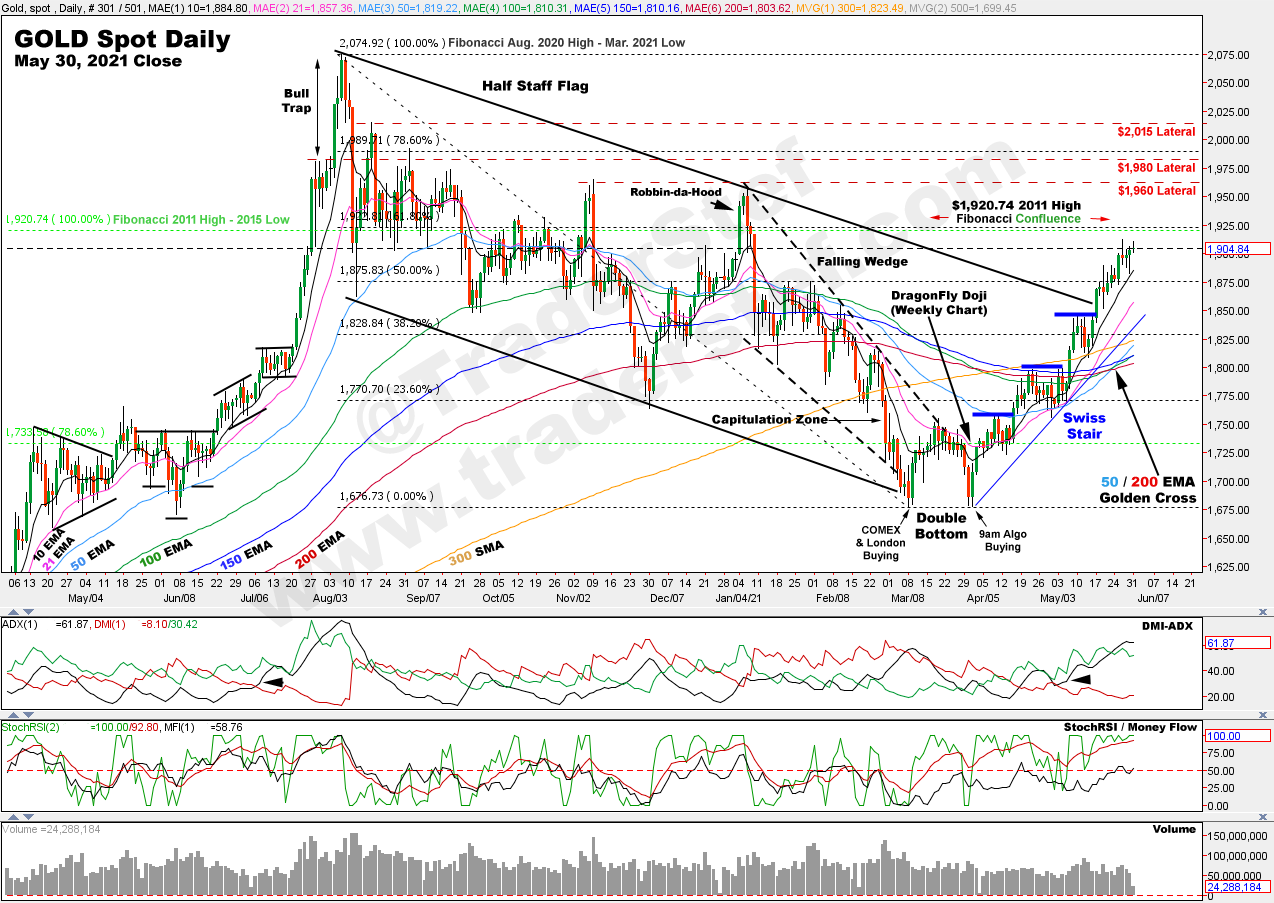 “The Dragonfly Doji that completed an Adam & Adam Double Bottom continues to verify its relevance for the rally that began 5 weeks ago. It occurred at the confluence of a lower trendline drawn up from June 2019, a lateral support from the Inverse Head ‘n Shoulders drawn back to June 2020, the Half Staff Flag’s lower trendline drawn down from Aug. 2020, and confirmed a breakout from the Falling Wedge drawn down from the Jan. 2021 high. The rallies this past week were all fueled by falling dollar correlations, and the jobs report this morning was the icing on the cake that solidified Thursday’s break above $1,800… The topside trendline of the Half Staff Flag is the next battle at around $1,860, then a solid break above the $1,880 lateral will reopen a challenge of the $1,920 2011 high. The price action has less resistance to work through since last month and remains ripe for intraday scalps while working its way through to $1,980.”

The pattern that stands out on the daily chart is a Swiss Stair that immediately followed a bullish DragonFly Doji candlestick on the weekly chart. The difference between the Swiss and typical steps that often appear on charts, is that the Swiss are almost mathematically equal in distance and are indicative of smart money accumulating positions in anticipation of a significant move. The second pattern that stands out is a 50/200 EMA Golden Cross, which is also indicative of imminent upside movement. Also, notice how all of the moving averages are moving back into bullish alignment.

The price action is bullish, but it does appear that a healthy breather is in order near the $1,920 lateral and Fibonacci Confluence. The Alligator Tongue power trend set up on the DMI-ADX is slightly long in the tooth along with the StochRSI, which are another indication that a healthy breather may be in order before challenging the $1,960, the more important $1,980, and finally $2,015.  There is not much more to say because all the stars are lining up for a hot summer. The gold chart is very bullish.

Video: Jim Rickards Drops Truth Bombs Behind LBMA Silver Inventory Mishap… “The LBMA overstated their silver holdings in April, an error which they later rectified. Rickards gives his thoughts on the matter and other theories circulating in the gold and silver market. – Stansberry Research, May 24 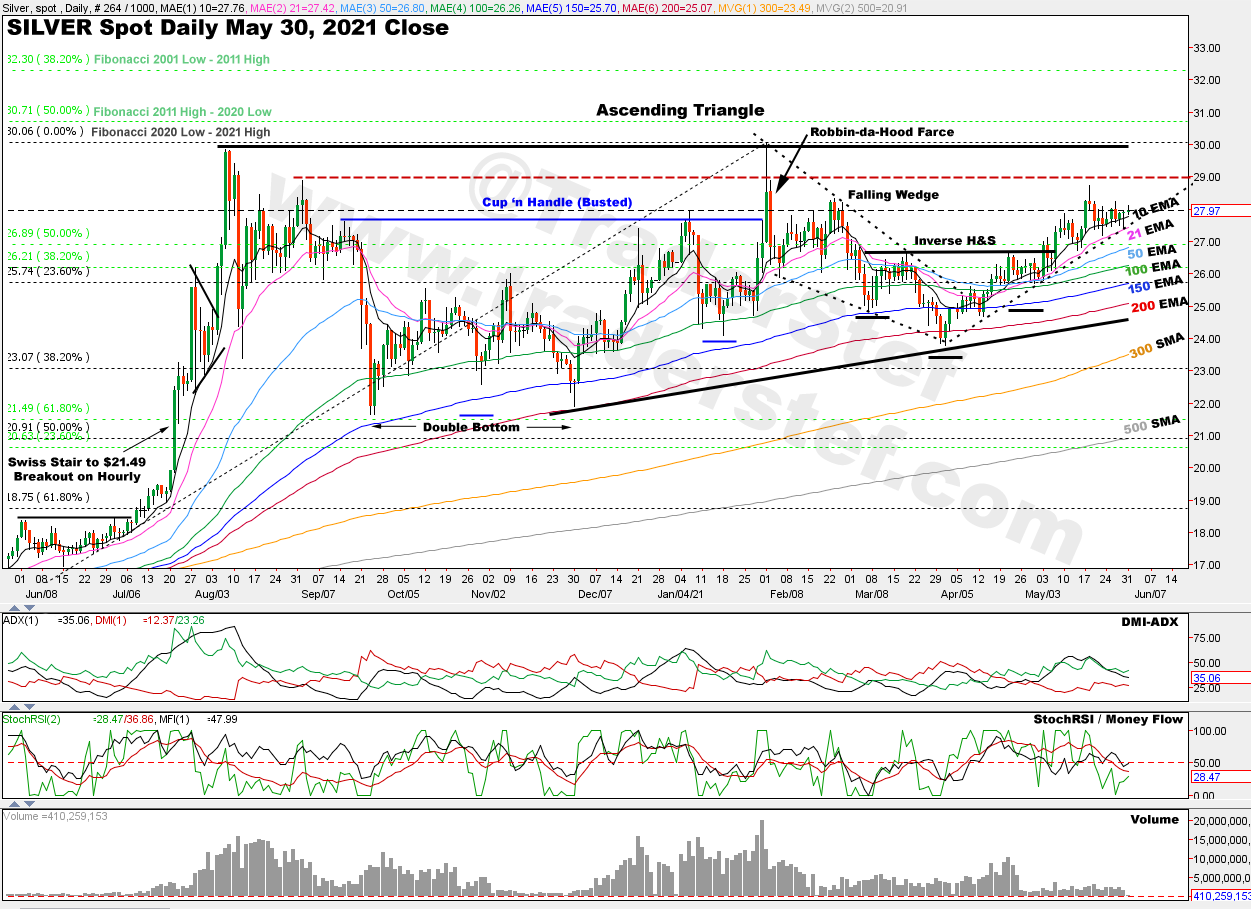 “After breaking away from the Falling Wedge, the price has printed higher lows within a steady Up Channel. The price closed at $27.43 this week and is sitting on the topside set of Fibonacci confluences. The dominant pattern that is forming is a bullish Ascending Triangle with its topside trendline at $30. The StochRSI is steadily making upward progress, the DMI-ADX is closer than gold’s to forming an Alligator Tongue power trend setup, and buy Volume is rising along with a rising price. The price action is edging closer to the all-important $29 to $30 resistance zone. If the $29-$30 level is taken out decisively on price and Volume, a bull run to $50 could be explosive. Stay on your toes.”

The silver daily chart is very constructive while the price action is trending above all the moving averages. The Ascending Triangle continues to build and a bullish Inverse Head ‘n Shoulders launched the price action above $27. The $28 lateral resistance has been a challenge for a week as the DMI-ADX and StochRSI slowly reset to resume a positive trend. As noted on numerous occasions, the $29 and $30 resistance levels are a big deal. The longer silver consolidates here and follows gold’s lead, the more likely a breach above $30 will happen sooner than later. The silver chart is bullish and a breather with gold would be healthy. Beyond that, there is a potential for a really hot summer with blistering upside moves on the way to $40 or $50. 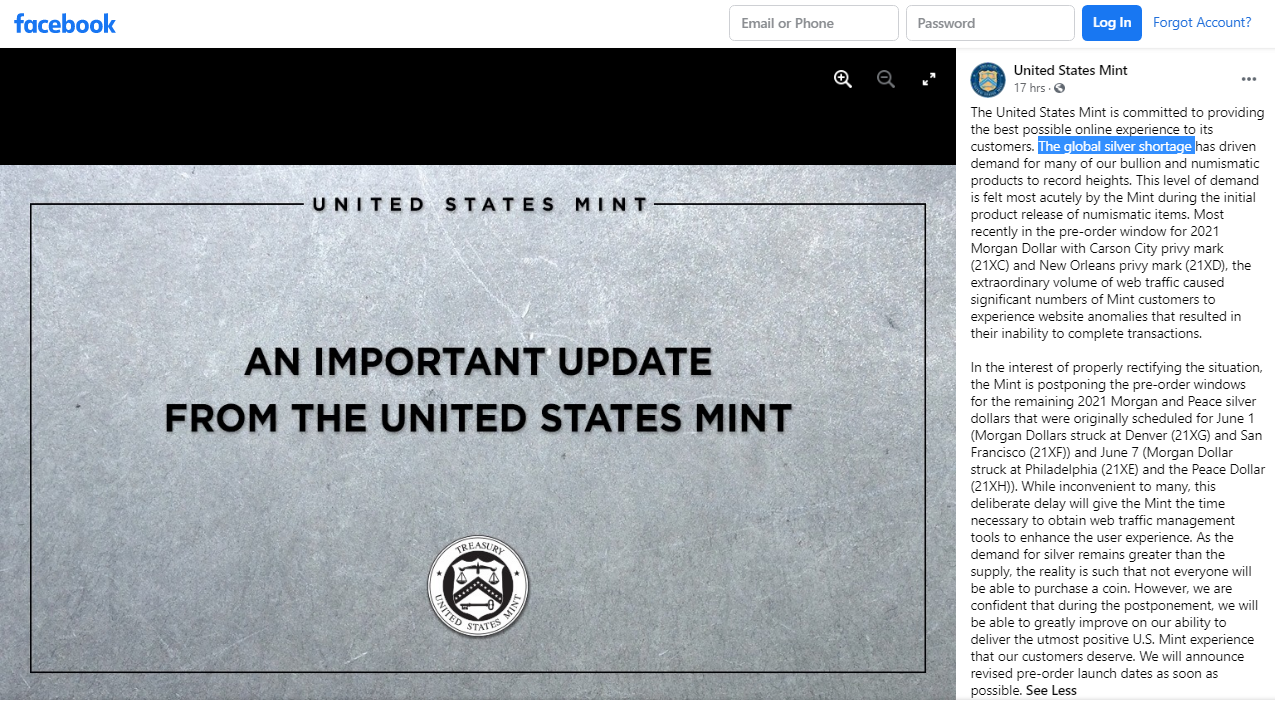