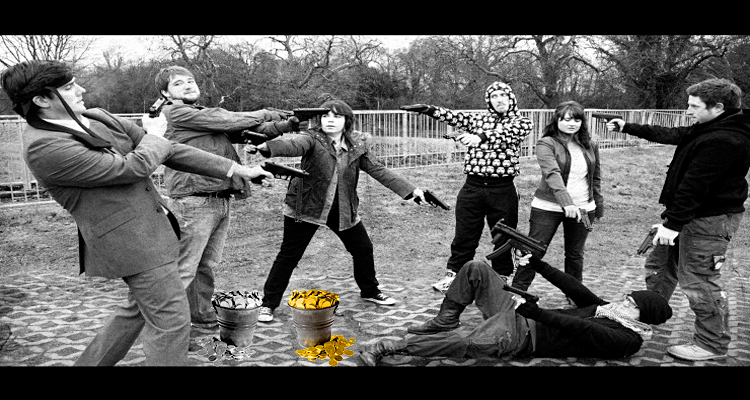 After penning Part 1 and discussing the incessant whining and manipulation fear that repeatedly boils to the surface when gold or silver does not meet plebeian expectations, even more complaints from retail investors, trolls, and a few pundits were heard loud and clear this week. Some folks never seem to get enough of outdated narratives that conceal their emotional attachment to an investment in precious metals. The market does not care about your feelings, and it would be wise to assess your motives and choices of where to invest your capital in the future. If you have not already done so, please take time to review the gold and silver commentary and charts in Part 1 before continuing with today’s analyses.

Eric Yeung hit the nail on the head last Friday:

This week’s complaint from the bleacher seats was gold and silver contract expirations in the futures market, but it was not a significant influence this time around. If you review a few years of gold on a weekly candlestick chart and overlay it with expirations, the number of weekly closes that are higher or lower than the opening price are roughly equal. Another narrative that surfaced is spoofing by institutional banking, but that cup of fear does not hold water today either. A lawsuit against JPMorgan was cited from last fall when they paid $60 million for spoofing in the precious metals. That case is actually six years old and prior to the 2014/15 switch to a fully automated ‘fix’ via Gold Spot, and regulators are now keen to spoofing idiots. 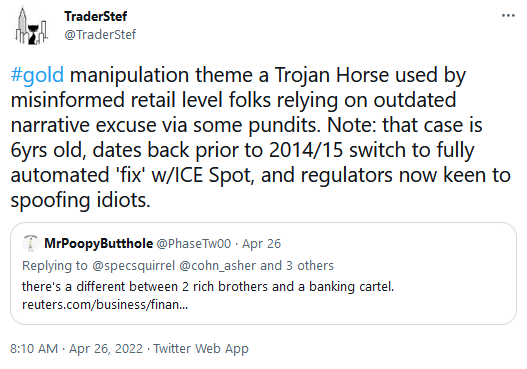 With the above in mind, let’s consider a few data points that influenced the financial markets in April. The legacy media propaganda about the war between Russia and Ukraine is now long in the tooth. Reality is just beginning to set in. Russia isn’t losing and is accomplishing what it set out to do. What is prolonging the conflict, escalating it, and fostering an economic disaster in the West, is that the U.S. and NATO have launched a proxy war against Russia with economic sanctions, providing lethal weaponry, and encouraging foreign mercenaries to fight alongside the Ukrainian military. This geopolitical situation is growing more dangerous and foolish between the nuclear powers.

In mid-April, a huge story was the sinking of Russia’s Moskva battleship cruiser in the Black Sea. It took a few days for an official acknowledgement out of Moscow, but that’s the fog of war effect. What makes it worse, is that NATO is providing real-time intelligence on the battlefield and more than likely contributed to the sinking of the Moskva. What’s also disturbing is that covert military operations are now striking deep inside Russian territory. Here are a few articles and commentary to consider: 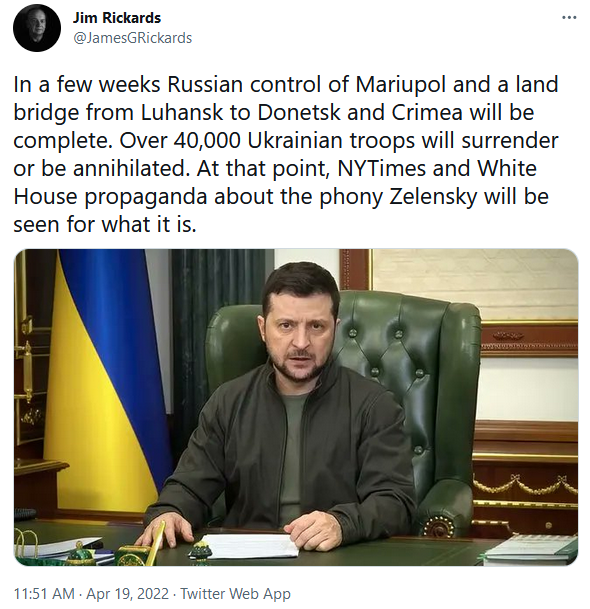 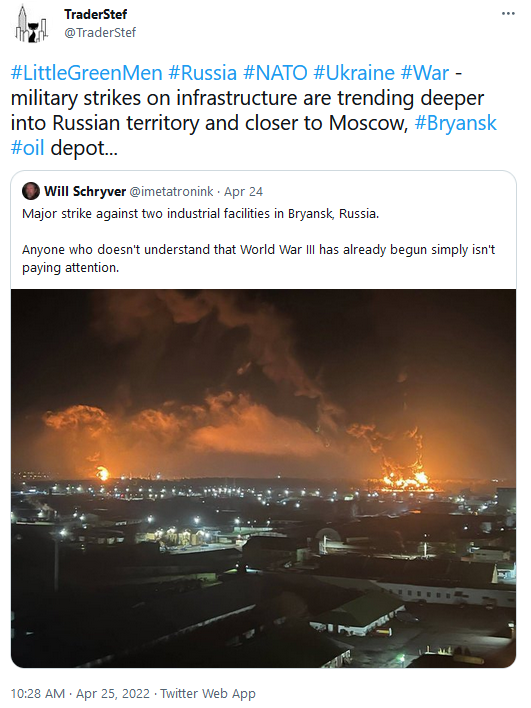 On top of issues like rampant inflation, economic data points that point to a recession on our doorstep, food shortages, and China’s new lockdown that’s set to launch a wicked supply chain crisis this summer, the escalation of war on the European continent is encouraging capital to flee Europe and into the U.S. The unprecedented circumstances noted above have contributed to the recent rally in the dollar. If you’re looking for static correlations in financial markets, that’s not the world we’re currently living in. I put together a monthly chart on Apr. 15 that compares the USD, Euro, and Gold Spot since the early 90s. The USD is still considered a safe haven in the West’s bankrupt neighborhood because big pockets are parking their capital in the U.S. 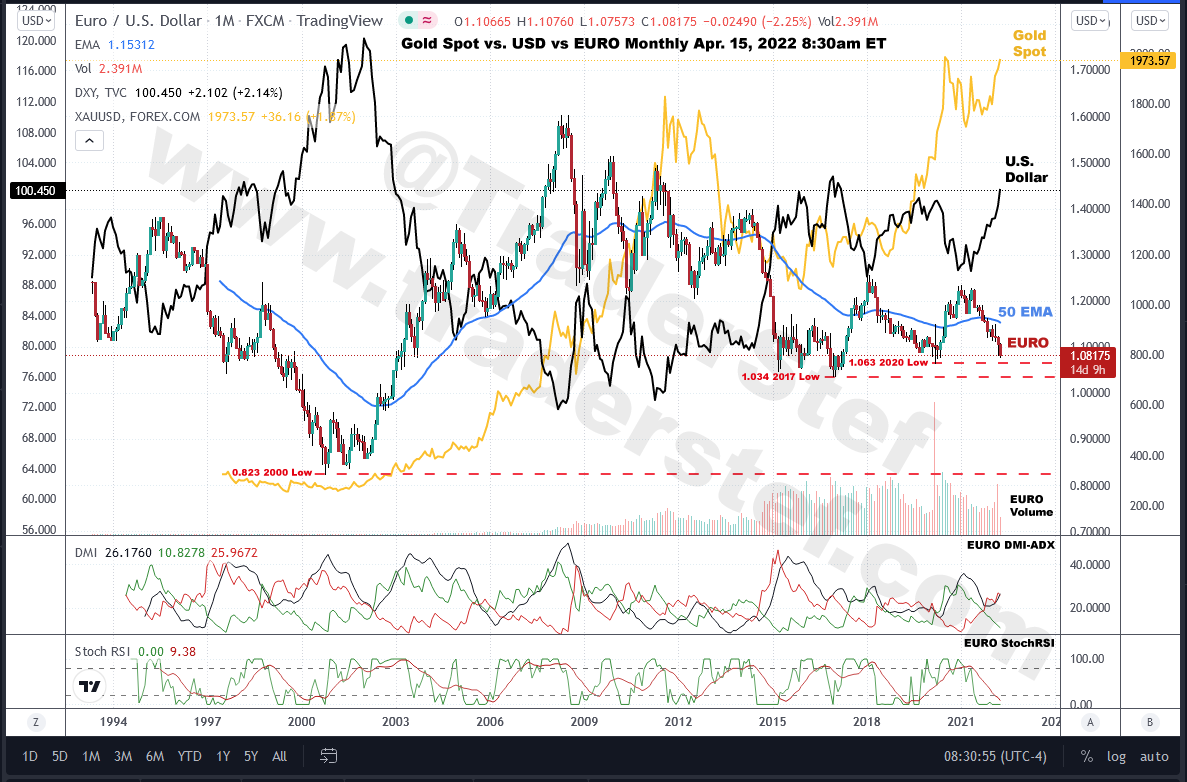 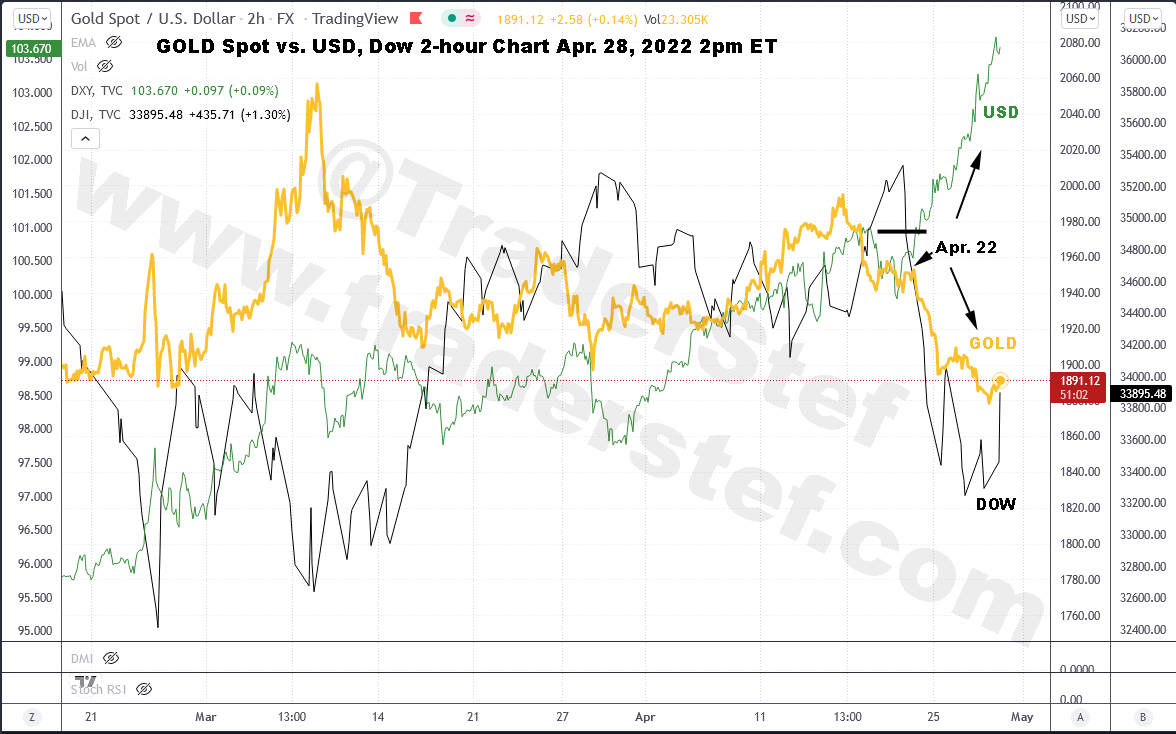 Another variable that is often overlooked and contributed to a pullback in the price of gold this week was noted by Jim Rickards. Liquidity is an issue when the stock market gets whacked and paper gold is sold for cash to provide liquidity for potential or existing margin calls. 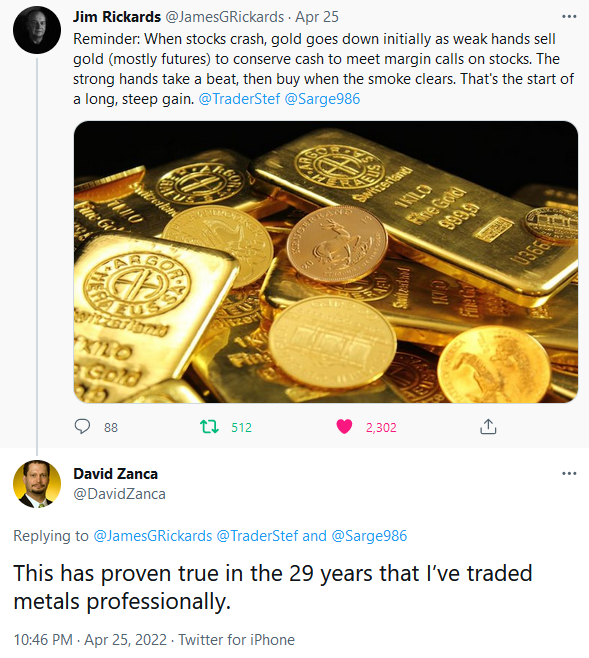 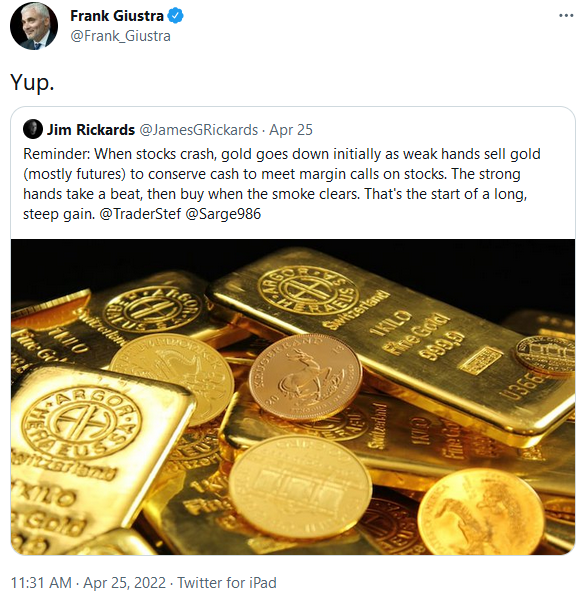 Lastly, I noted in Part 1 that we’re in the middle of spring seasonality and the price action is typically choppy until very late spring or early summer. 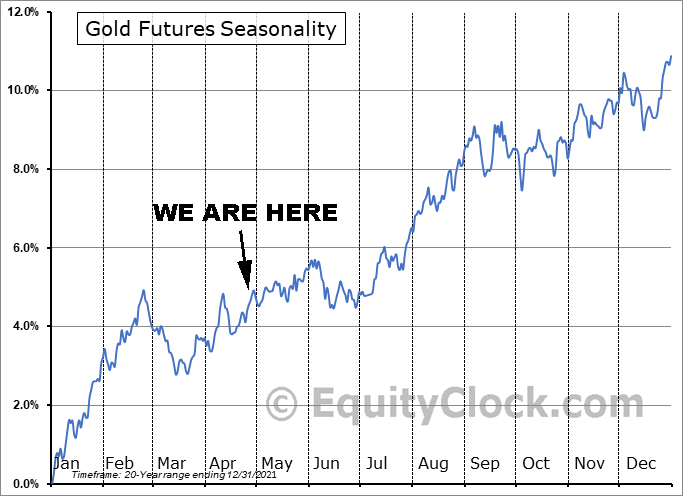 The following chart might suppress some whining from those that believe gold isn’t rising fast enough or high enough. 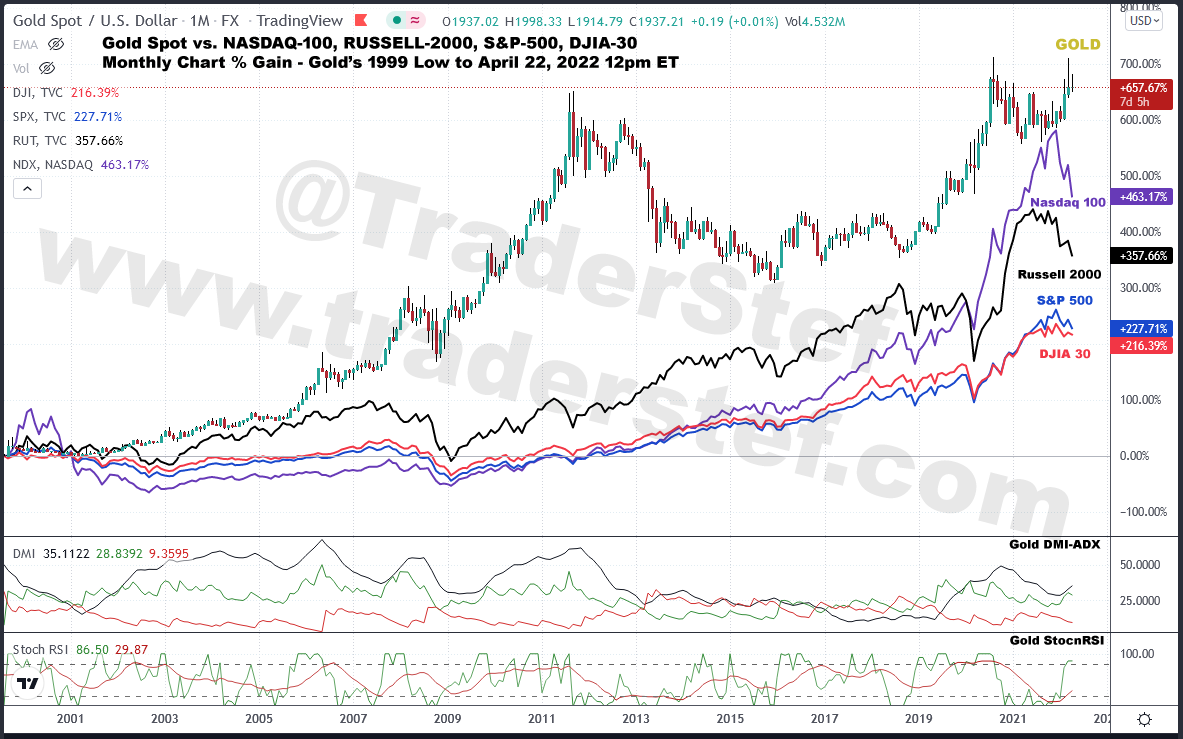 Let’s move on to technical analysis of gold and silver as of today’s stock market close. To view a larger version of either chart below, right-click on it and choose your “view image” option. 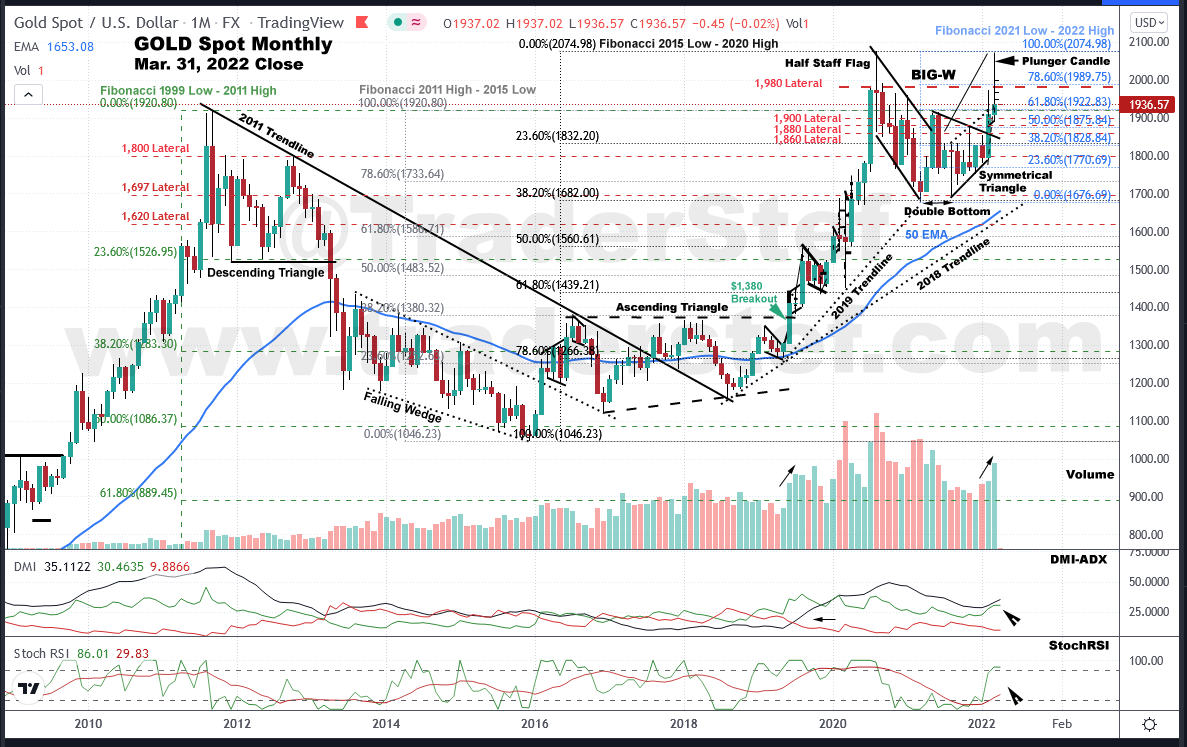 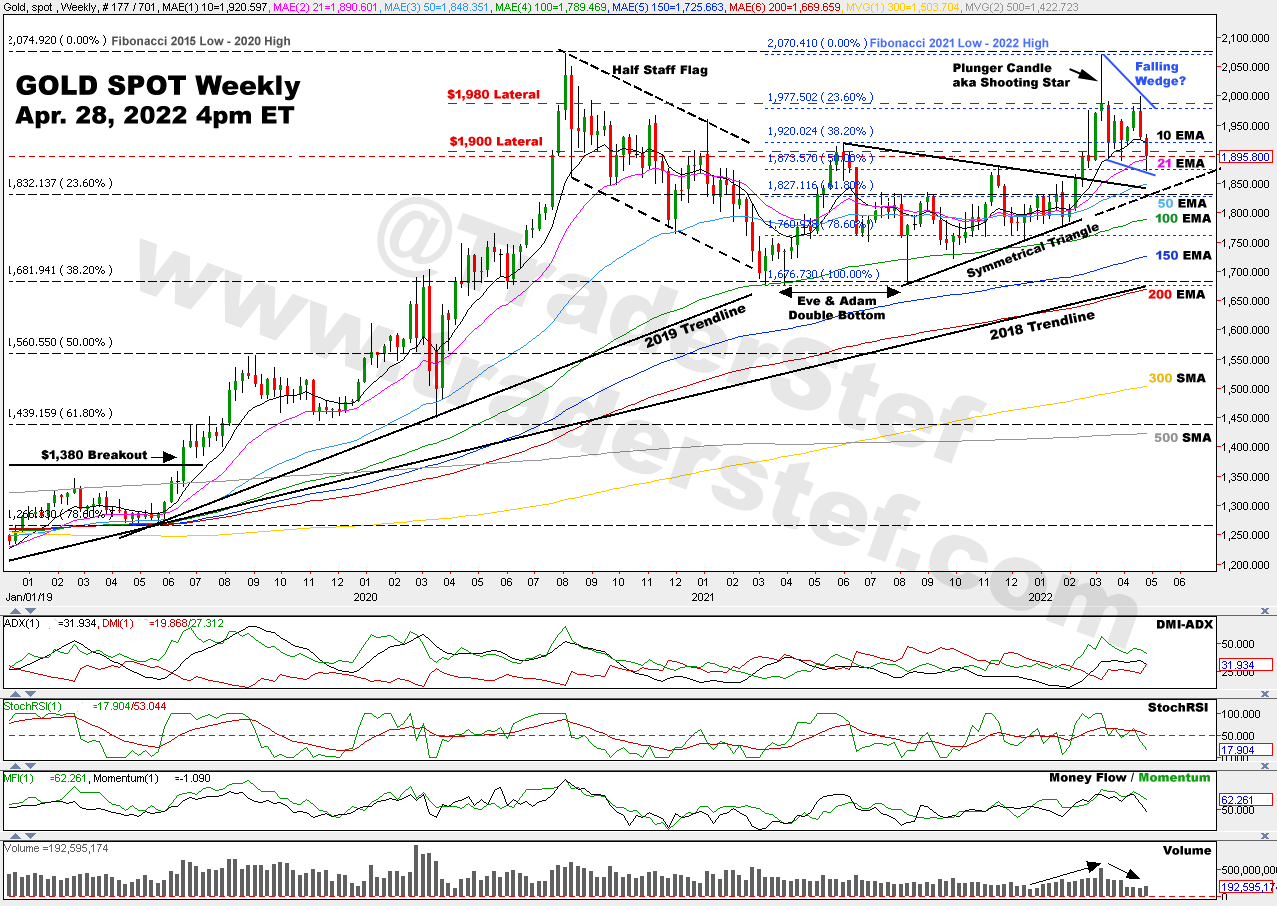 “The Symmetrical Triangle pattern on the weekly chart with lower highs since June 2021 and higher lows since August was left in the dust since mid-February. There is still a chance for a Throwback that will test the Symmetrical Triangle’s topside trendline, Fibonacci levels above it, and $1,900 to confirm solid support before challenging the all-time high of $2,075. Take note of the Swiss Stair pattern (mid-February) on the hourly chart ($1,870-$1,900) that provided support during price volatility… As expected since the fall of 2020, $1,980 is an important resistance level to penetrate… Gold is not completely out of the woods but is making powerful progress, and the chart is bullish. The chart is ripe for scalping intraday sweet spots, and caution is warranted until $1,980 is left in the dust before risking large paper positions for a swing trade.”

“The monthly candlestick for March ended as a bearish Plunger Candle (aka Shooting Star) with a $1,890 low and closed today at $1,937… Due to the accelerated price spike that tapped an all-time-high area, the chart has developed a bullish Big-W pattern. As noted in the Mar. 4 analysis, the Throwback could revisit the topside trendline of the Symmetrical Triangle. As the days tick away, that trendline trends downward and is currently at $1,850. Don’t be surprised if it has a visit and is probed for support. Precious metals are currently in spring seasonality and the price action is typically choppy until the next rally in late spring or early summer. News headlines generated about the Ukraine war are having noticeable impacts on the intraday price action. Despite the pullback, the monthly chart outlook is bullish. Don’t dismiss the fact that higher prices beget larger price swings and monthly chart indicators shift at a much slower pace that shorter time frame candlesticks. The chart is ripe for scalping intraday.”

The weekly candlestick in the first week of March printed a bearish Plunger Candle and was followed by another for its entire month. Please note the highlighted text above from the Mar. 31 analysis. A Plunger tells you there was significant selling pressure off its high and warns that further downside in the near-term is likely. Gold has printed a high of $1,998 in April, a $1,872 low today, and bounced back to $1,896 by the end of New York trading hours. The buy Volume within a Swiss Stair that formed above the Symmetrical Triangle’s topside trendline breakout is providing support around $1,870. The price could still drop further into late spring and test the 50 Exponential Moving Average (EMA) and Symmetrical Triangle’s topside trendline as support near $1,850. A bullish Falling Wedge may be forming, but it’s too early to call. If the price action taps $1,850, the Falling Wedge would morph into a Half Staff Flag.

The DMI-ADX is still trending positive but indecisive, the StochRSI indicates that extended chop or more downside is possible, and the Money Flow and Momentum is rolling over. The good news is that Volume is falling with a Throwback in price and that’s indicative of an oversold condition. No major technical damage has taken place. The chart is neutral to bullish and ripe for scalping sweet spots until $1,980 is left in the dust before risking large paper positions for swing trades. 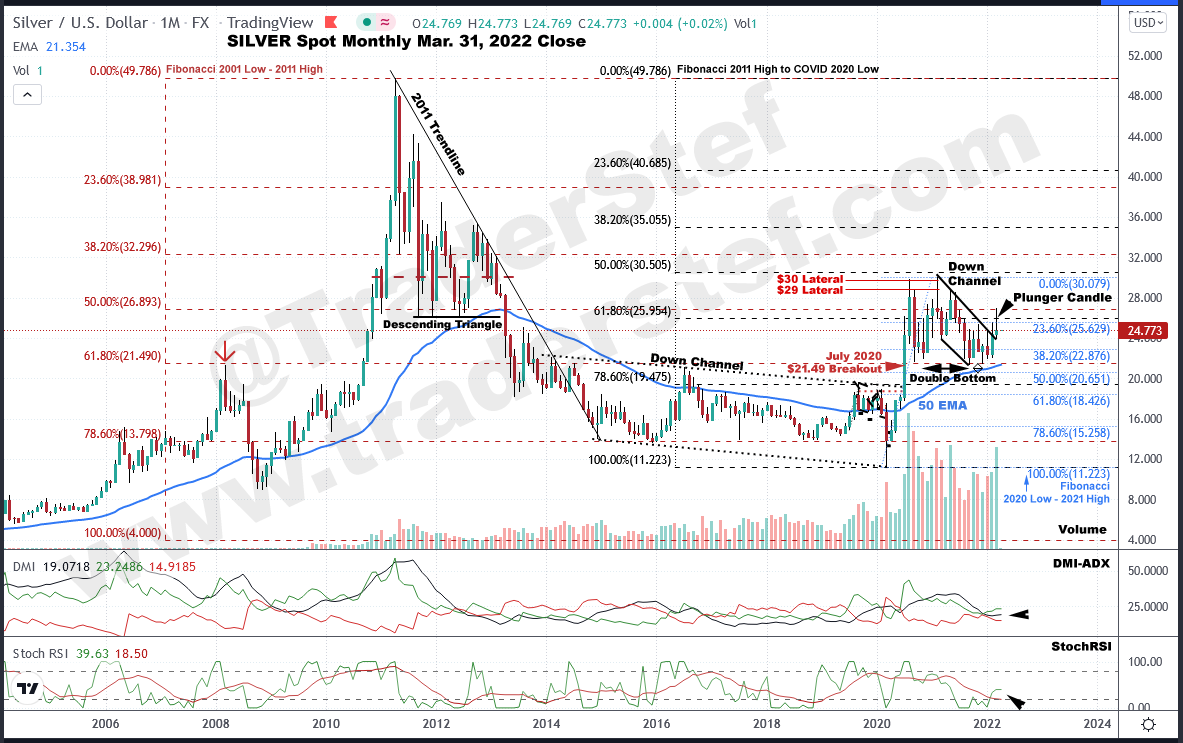 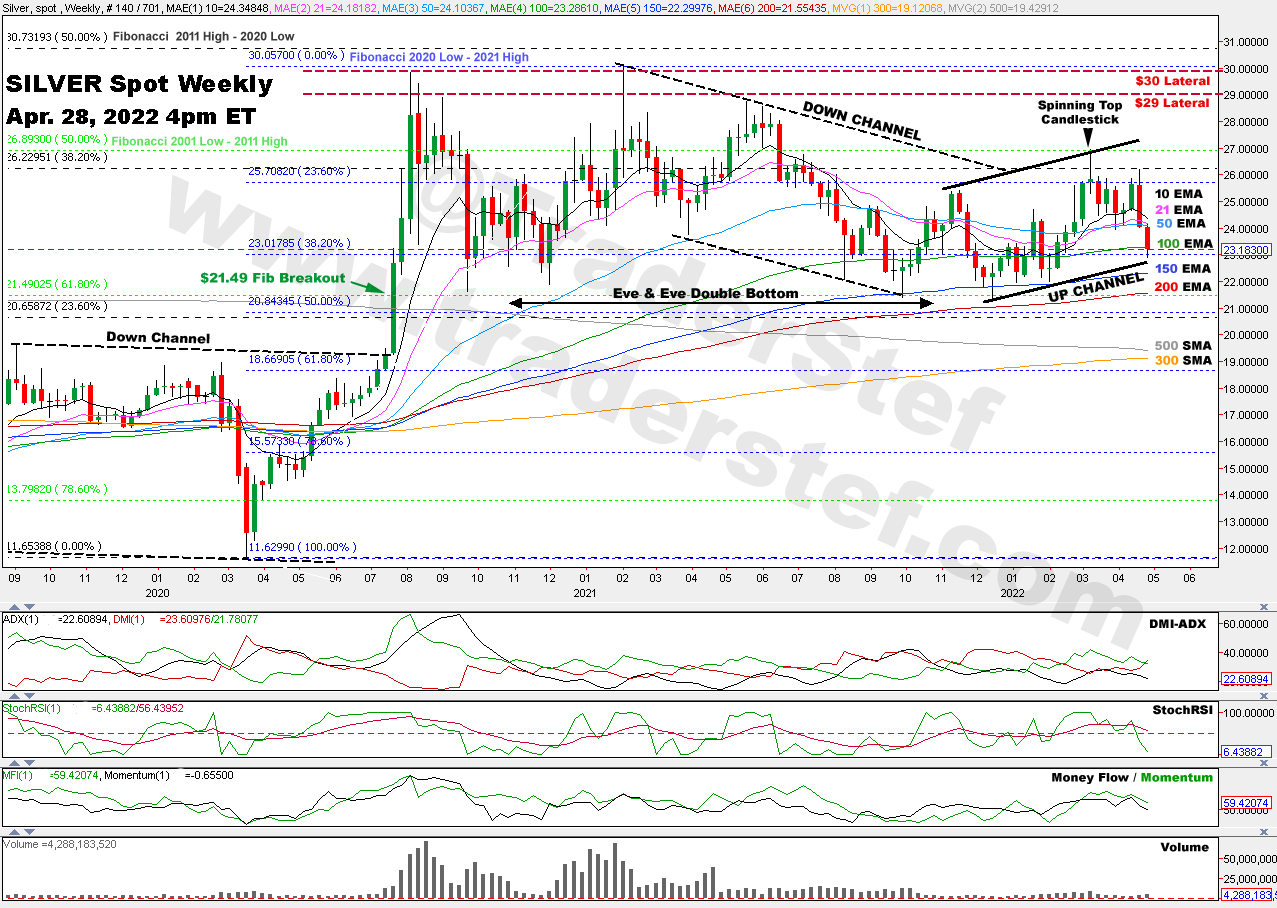 “Silver is not out of the woods, and the chart is ripe for scalping intraday sweet spots. $25.70 is the last substantial resistance to conquer before $29 and $30 are challenged for all the marbles. Caution is warranted before layering in large paper positions for swing trades until $29 and $30 are left in the dust.”

“In the month of March, silver printed a high of $26.93 on Mar. 8, a low of $23.95 on Mar. 29, and closed today at $24.77. Silver also printed a Plunger Candle… It’s worth repeating that the $21.49 Fibonacci level has maintained its role as a support level through all volatility since the Jul. 2020 breakout and Aug. 2020 high. It deserves a gold star for performance. The chart is ripe for intraday sweet spot scalps, but caution is warranted before layering in large paper positions for swing trades until $29 and $30 are left in the dust.”

Silver has printed a high of $26.19 in April, a $22.87 low today, and bounced back to $23.18 by the end of New York trading hours. The weekly candlestick in the first week of March printed an indecisive Spinning Top and closed out the month with a bearish Plunger Candle. It appears that an Up Channel is taking shape off of the Eve & Eve Double Bottom at $21.49 support. This week’s price fall was halted at the 100 EMA.

The DMI-ADX has struggled to remain positive in April and is now indecisive, the StochRSI is trending negative, Money Flow and Momentum are rolling over, and Volume is unremarkable. As usual, silver will take its marching orders from whatever gold decides to do in the near-term, and is in the neutral to bullish camp as long as $21.49 support holds firm. After the price actions pivots to the upside, silver will be ripe for intraday scalping opportunities. Caution is warranted before layering in large paper positions for swing trades until $29 and $30 are left in the dust.

If you’re still upset about the recent price action in precious metals, the following music video was made just for you.

Texas Hippie Coalition – Pissed Off and Mad About It