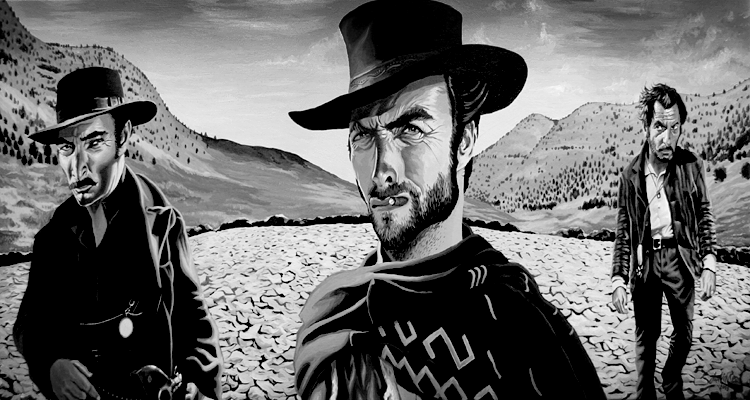 Today’s analyses will provide more insight on silver than gold, but a technical analysis with charts for each are included. If you have not already done so, read the full commentary in “Gold and Silver Outlook for Summer 2022” Part 1 (Twitter thread), published on May 31. The dollar (USD) has had a wicked rally since March that put downward price pressure across the commodities sector and silver experienced an extra slap in the face due to its 50%+ exposure to industrial use. I suggest a review of my USD technical analysis in “$300 Trillion Global Debt, Raging Inflation, and War as the Dollar Spikes,” published on July 14. To view a larger version of any chart below, right-click on it and choose your “view image” option.

Here are the seasonality charts for gold and silver futures: 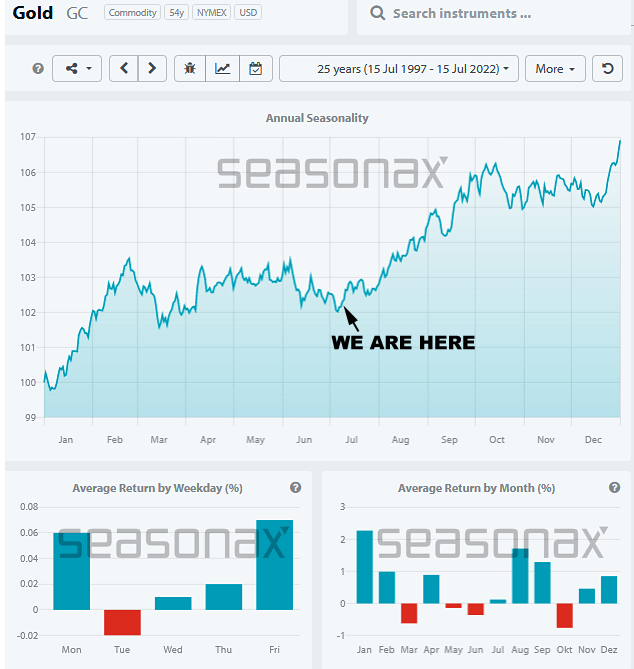 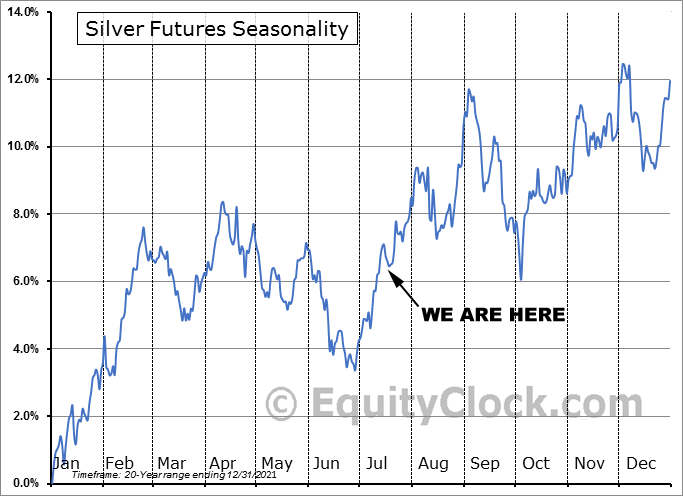 The chart below is a YoY overlay with silver spot weekly as of the Jul. 15, 2022 close, and the CFTC’s Commitments of Traders (CoT) report data as of Jul. 12 that was released on Jul. 15. The CoT is always delayed by one week. The CoT Jul. 19 report will cover the previous week’s data and is released on Jul. 22.

The purpose for an overlay is to help identify near-term price trends based on positioning by the commercials (i.e., bullion banks), and the large speculators  (i.e., hedge funds) data that’s combined with small speculators on the bar chart. Almost without exception, the commercials build short positions during a rising price trend and add longs when the price is falling. That strategy goes against the retail mindset. On the other hand, large specs capture the momo play in either direction by adding long positions during rallies and go short on pullbacks. When price approaches an inflection point that’s extremely overbought or oversold, the positioning begins to flip. Zoom in to the red line and view the Cot Jul. 12 data points. Note the arrows I embedded, and the shift in the last four weeks in long vs. short positioning in the commercials vs. large specs vs. the silver price action. 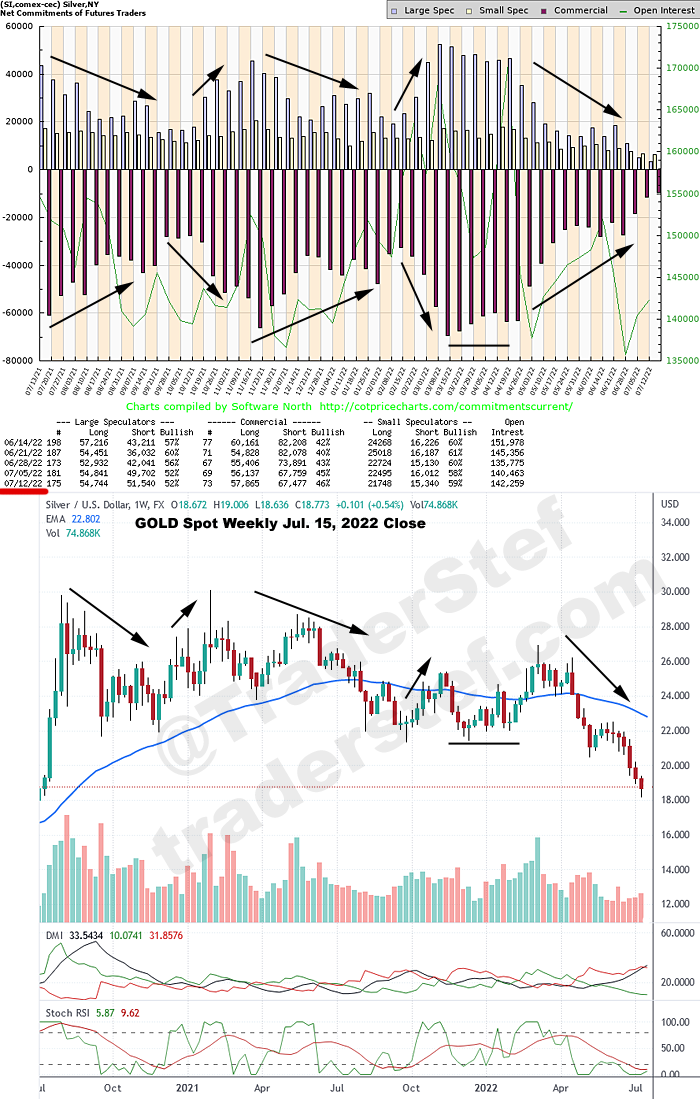 A lot of analyses are floating around that’s confident the current CoT set-up in silver is indicative of an imminent rally. That would coincide with typical summer seasonality, but it does not always materialize. The current CoT set-up vs. the last twenty years or so is very rare, but that does not guarantee a spectacular upside move. I covered a similar situation in “The Good, The Bad, and The Ugly for Silver,” published in Apr. 2018. The price action subsequently fell an additional $2, chopped sideways for four months through the summer, then finally pivoted to the upside in Dec. 2018 and ended with a $5 rally. The majority of that gain occurred through the summer of 2019.

The bottom line is that you cannot rely heavily on futures rhetoric that routinely blames outdated manipulation narratives. Gold and silver are certainly in a technical and fundamental position to rally before India’s fall wedding season, but the buck stops at the spot price chart. With that said, let’s move on to the technical analysis of gold and silver. 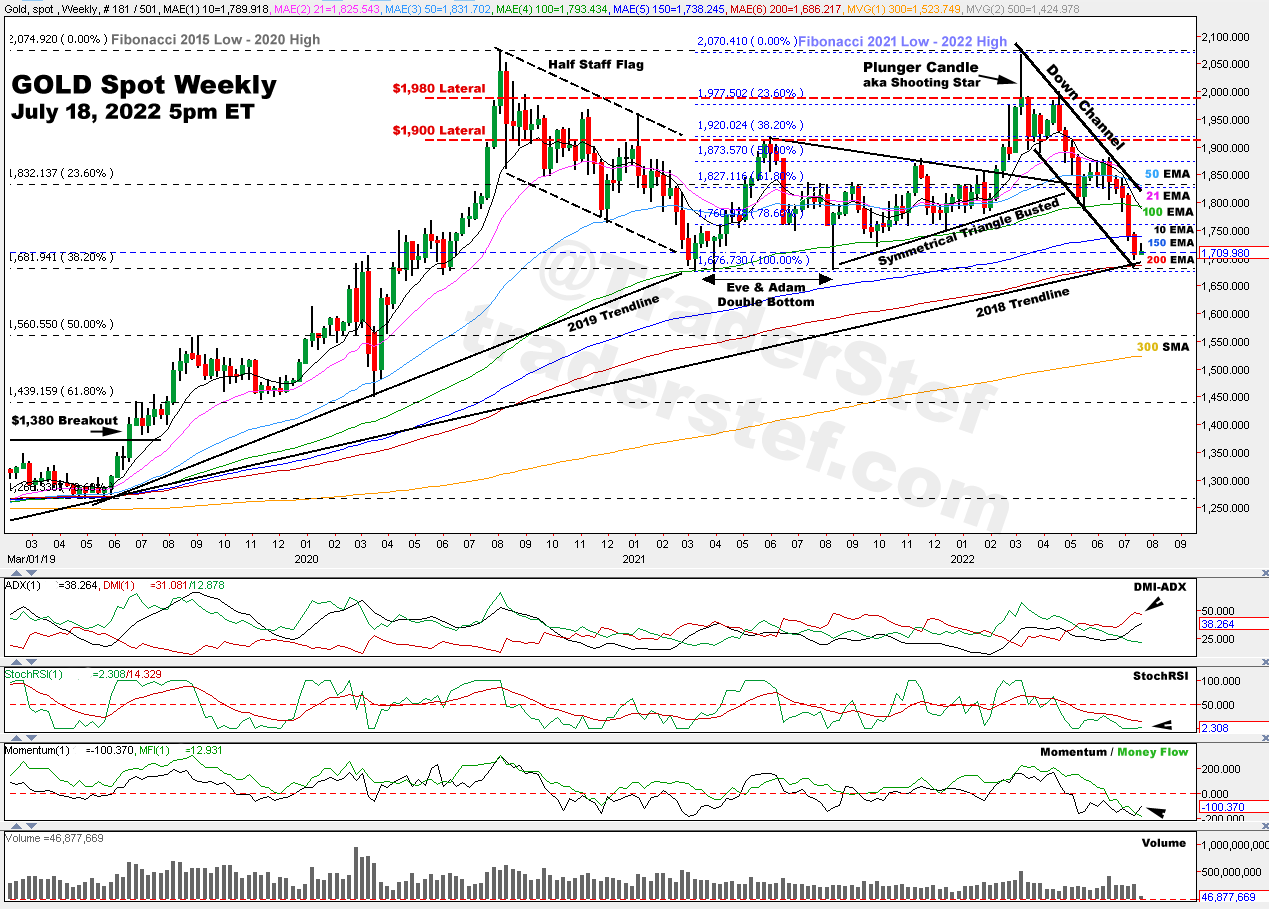 Excerpt from the May 31, 2022 weekly gold chart analysis:

“In late March, an explosive rally took hold in the USD and paralleled the U.S. stock markets third wave down. That combination and factors noted in the spring analyses forced gold into a substantial Throwback…. The DMI-ADX is still trending indecisive, the StochRSI is indicative of continued chop in the price action, the Money Flow and Momentum have not yet pivoted to the upside… Gold is not out of the woods. Unless a major geopolitical or financial news event jolts gold out of spring seasonality before the end of June, expect volatility and consolidation to continue a while longer.”

The Plunger Candle (aka Shooting Star) that printed in March was a reliable indicator that a correction was coming. The subsequent Down Channel is clearly defined on the chart. An explosive stage in the USD rally that pushed gold down through several support levels has abated since last Thursday. Gold has not broken through an important confluence of support that includes the 200 Exponential Average (EMA), a 38.2% Fibonacci retracement level at $1,682, the 2018 lower trendline, and the Eve & Adam Double Bottom lateral from mid-2021. The hourly and daily chart (not shown) have positive signals that gold’s correction may be in the process of ending, and a period of sideways chop is in the cards before any uptrend can solidify. The weekly chart is not a glorious sight, but it’s more positive than silver while holding above the lateral confluence of support.

The bearish DMI-ADX is showing the first indication of exhaustion, the StochRSI study is in extreme oversold territory, Money Flow has not yet turned upwards, Momentum is just beginning to reverse its downtrend, and Volume is unremarkable but steady. The next two weeks will impact markets with the Fed’s FOMC meeting next week and the war in Ukraine is set to escalate. The gold chart is neutral as the confluence of support is holding, but could turn bullish in the near-term if the USD remains subdued and/or the Fed provides any hint of backing off the interest rate peddle as the recession takes hold. 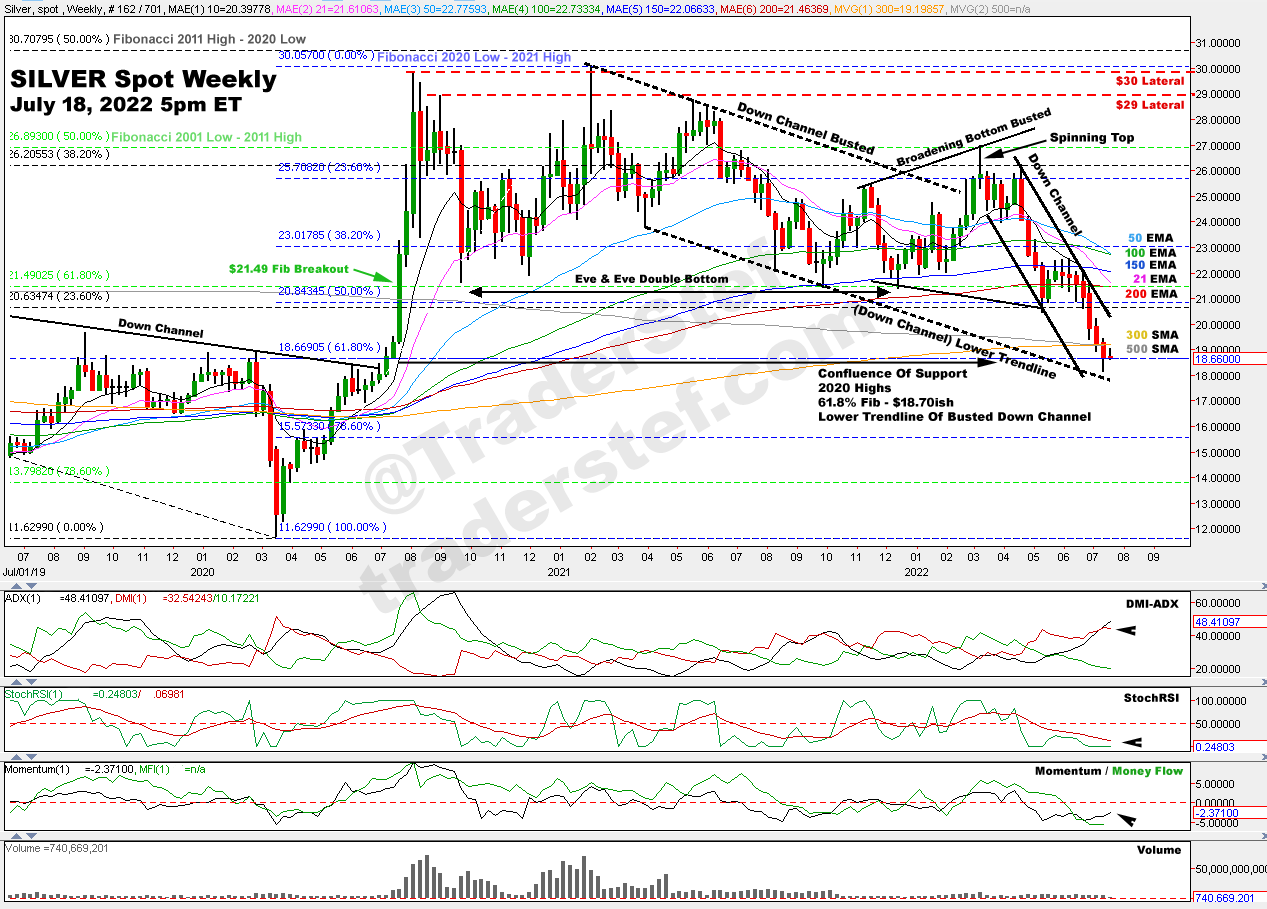 Excerpt from the May 31, 2022 weekly silver chart analysis:

“Silver follows gold’s lead and that certainly rang true in the month of May… there’s still hope for silver to break free. Note that the $21.49 Fibonacci (lateral support) level and Eve & Eve Double Bottom were briefly breached and immediately bought… The price action is trying to break back above the 150 EMA and closed at $21.54 today… The DMI-ADX returned to a negative trend in May, the StochRSI is trended negative, and Money Flow and Momentum are looking for a bottom to pivot off of.”

The first week of March printed an indecisive Spinning Top and the subsequent Down Channel broke through $21.49 lateral support during a concurrent spike in the USD. Similar to the gold chart, silver is resting upon a confluence of support that includes highs from late 2020, a 61.8% Fibonacci retracement level at $18.70ish, and the lower trendline of a busted Down Channel that’s drawn back to 2021. The set-up on the DMI-ADX, StochRSI, Momentum, and Money Flow are identical to the gold chart. The Volume is unremarkable. There are signs on the hourly and daily chart (not shown) that silver’s correction could be in the process of ending. I have laddered positions into the $SLV ETF since late June, as the paper market has fallen into the all-in-sustaining-costs (AISC) abyss of silver mining production.

Meanwhile, retail premiums on physical bullion coin are sky-high and supplies are intermittent since summer of 2020. The retail price for a bright-uncirculated 1oz American Silver Eagle is roughly $35 with the paper market trading at $18.60 this evening. 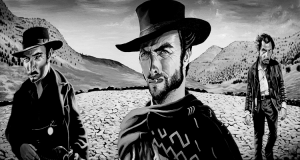