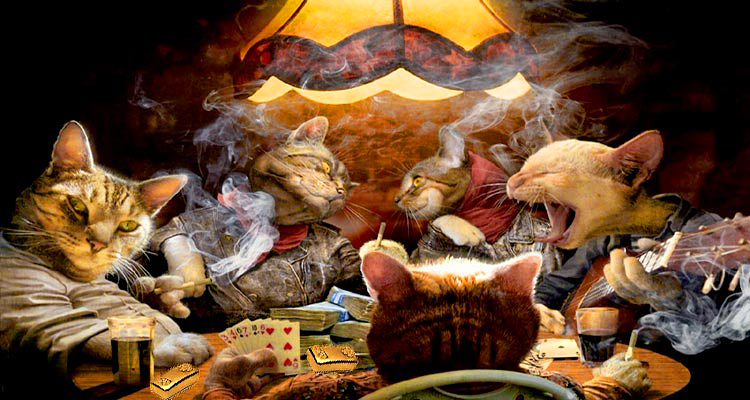 There is a broader war on our doorstep that will multiply the rate of economic hardship at home and abroad as we accelerate toward a global recession. The timing could not be worse as partisan political upheaval dominates Capitol Hill, and Deep State folks are slated to do some explaining under oath about numerous issues. The House will also be scrutinizing a hoard of destructive fiscal policies and out-of-control debt issuance. Those are a few of the many reasons why China is liquidating long-term U.S. Treasury holdings and buying gold bullion at a quickened pace along with many other countries. After witnessing the sanctions imposed against Russia by the collective West due to a proxy war with NATO in Ukraine, the CCP is in a rush to mitigate the financial risk that would result from its looming takeover of Taiwan.

“China and Russia are now the largest savers of gold. The central banks of the two countries are buying gold at the fastest pace since 1967. The main message is that Russia and China no longer want to rely on the US dollar as their main reserve asset.” – Jackson Hinkle, Dec. 31, 2022

What’s Going on with Gold?… “Goldbugs are cheering that there has been a central bank buying of gold. They think somehow that this is because they are bullish on gold. What seems to be going over their heads is what I warned before – when China starts to sell US debt, war is coming. I have made it very clear that the precursor to war is always capital flows. That will be on steroids this year.” – Armstrong Economics, Jan. 10, 2023

European stability is threatened by debt defaults that are expected to surge as a result of fiscal and monetary irresponsibility. The U.K. had a glimpse of that turmoil when a bond crisis erupted in the fall of 2022 and the Bank of England (BoE) was forced to stabilize Britain’s economy and pension funds with a dose of quantitative easing (QE). Japan also launched a new round of QE. Its central bank announced that it is buying $68 billion of Japan’s government bonds per month until at least March of 2023. Take note that the U.S. national debt is currently $31.5 trillion, and the interest paid to service that debt will reach $1 trillion annually before the end of this decade. That’s not sustainable with the Federal Reserve’s current quantitative tightening (QT) and the hiking of interest rates.

Janet Yellen’s Treasury Department issued a warning to Congress this past week that the U.S. will default on its debt by June 2023 if action is not taken “in a timely manner” to raise the debt limit. Aside from the numerous political battles that ultimately led to raising the debt limit in the past, the current atmosphere is reminiscent of a situation in mid-2011 when the U.S. credit rating was downgraded for the first time in history and gold rallied to $1,920 per ounce on the heels of an established bull run. The Taper Caper is threatening to manifest in the first half of 2023.

Yellen warns of U.S. default risk by early June, urges debt limit hike… “Republicans now in control of the House have threatened to use the debt ceiling as leverage to demand spending cuts from Democrats and the Biden administration. This has raised concerns in Washington and on Wall Street about a bruising fight over the debt ceiling this year that could be at least as disruptive as the protracted battle of 2011, which prompted a brief downgrade of the U.S. credit rating and years of forced domestic and military spending cuts. The White House said on Friday after Yellen’s letter that it will not negotiate over raising the debt ceiling. ‘This should be done without conditions,’ White House spokesperson Karine Jean-Pierre told reporters. ‘There’s going to be no negotiation over it.’” – Reuters, Jan. 13

Let’s move on to the technical analysis of gold and silver. Be mindful that a window of opportunity for swing or scalp trading paper ETFs, mining stocks, or futures contracts does not necessarily equate to the timing for buying physical bullion and coins. To view a larger version of any chart below, right-click on it and choose your “view image” option. Here is an excerpt from Part 1:

“The precious metals have made solid upside progress on the price charts since last month’s technical analysis with a rally after consolidation in a bottoming phase. They’re both on the doorstep of potential gains as we transition into the New Year if winter seasonality comes to fruition via India’s wedding season.” – TraderStef, Dec. 14 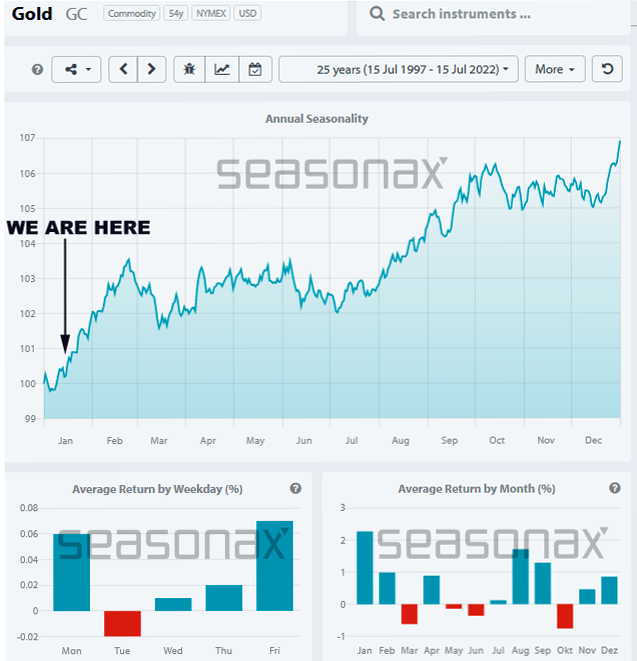 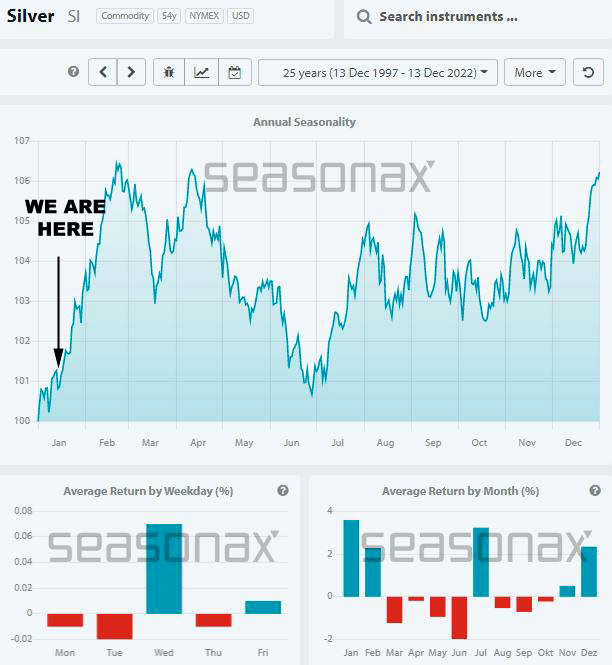 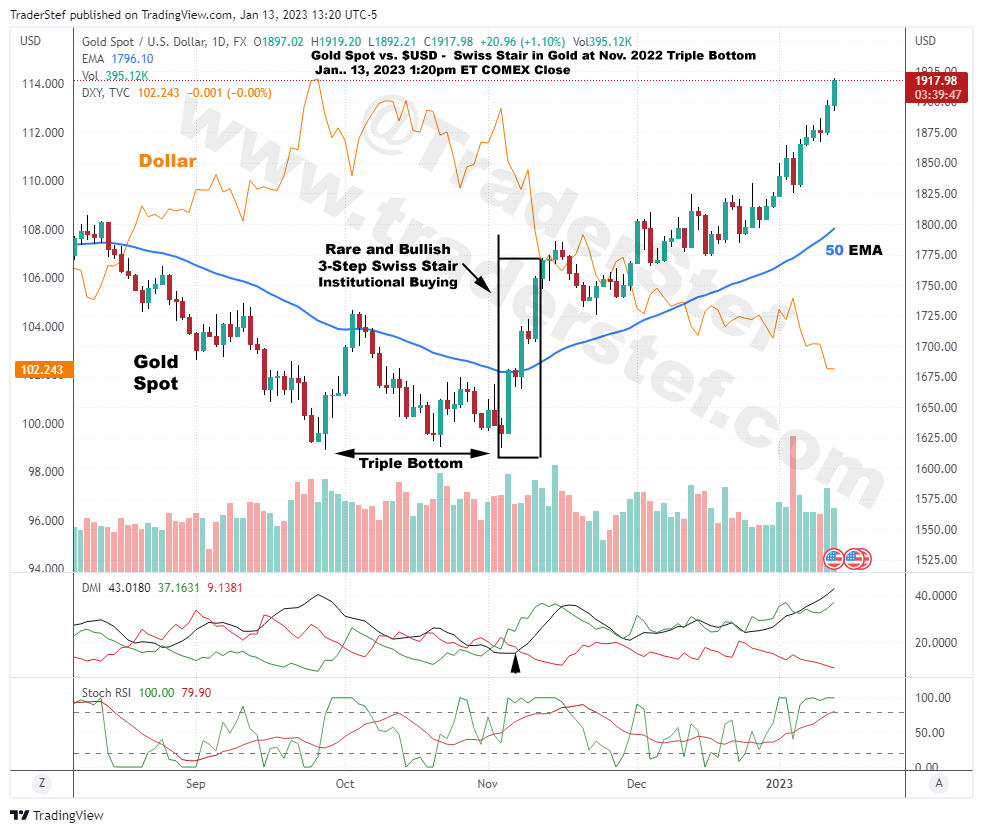 Here’s an explanation of the Swiss Stair’s significance from trader Dan Norcini in Nov. of 2009: 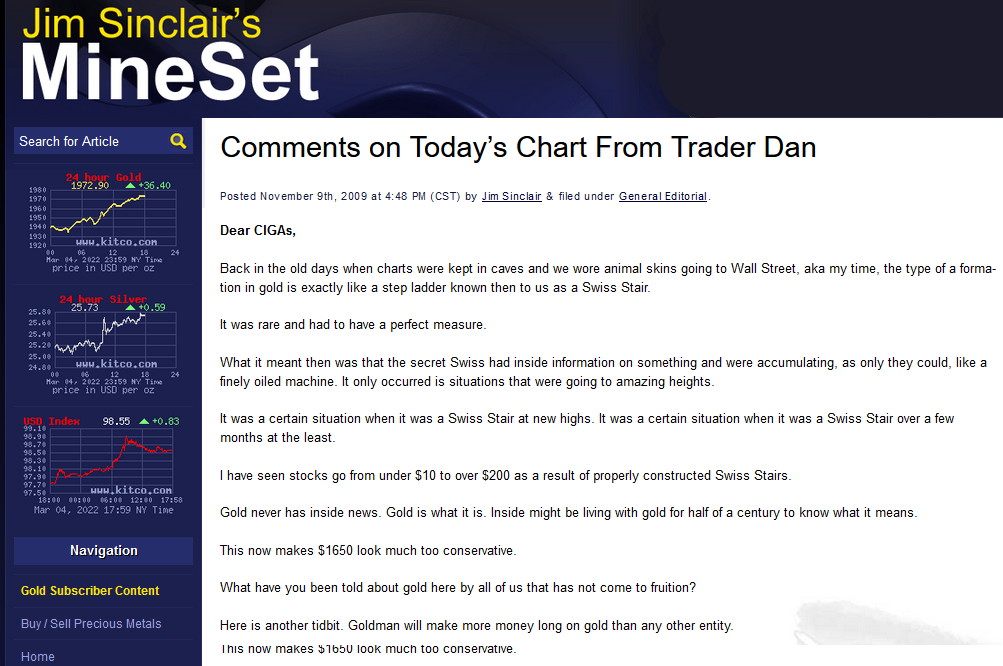 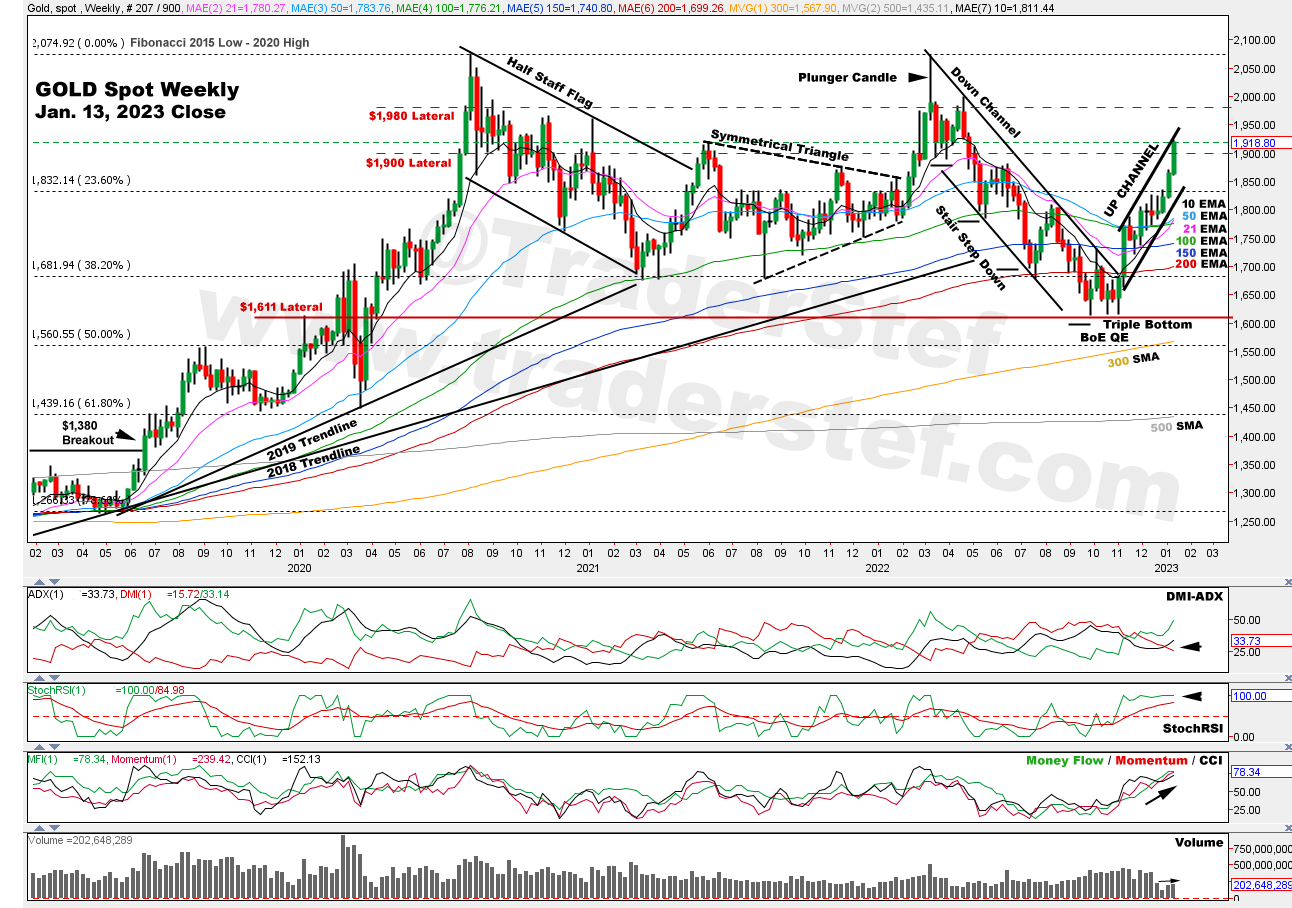 “After four brutal stair steps into a downtrend since March, gold is attempting to solidify a bottoming phase… Despite the U.S. stock market disappointment with Jay Powell’s post-FOMC fedspeak this past Wednesday, markets rallied all day Friday after the dollar plunged more than 2-full points on the heels of a less than stellar unemployment report. Gold’s rally was substantial, but price action on the weekly chart did not take out the Down Channel’s overhead trendline, 200 Exponential Moving Average (EMA), and 38.2% Fibonacci level at $1,680… The $1,611 lateral support is more relevant as each week passes without a break lower. As of Friday’s close, we have a Triple Bottom within a choppy and tight horizontal channel, and a solid Hammer Candle that could lead to additional upside… Gold is still not out of the woods and the chart is neutral until the DMI-ADX reverses to a bullish strength-of-trend signal. In the meantime, there will be opportunities to scalp any upside price action.”

“Gold printed a high of $1,824 yesterday following the lower than expected 7.1% CPI inflation print, was choppy under $1,815 ahead of today’s FOMC meeting, then closed at $1,806 after a bout of volatility during the monetary policy announcement and live presser… Volume printed lower last week, and this week’s candlestick and Volume bar do not finalize until Friday’s close… The chart is bullish heading into New Year and winter seasonality, but caution is warranted with the usual year-end profit taking and book squaring in financial markets. Also, keep a close eye on the dollar’s price action. If it falls below the 2017-20 lateral, gold will likely rise, but if it pivots into a relief rally, gold will likely tumble to support. Gold’s next topside resistance is in the $1,830s and support is wherever the 50 EMA trends.”

The pet rock has had a solid $300 rally after the pivot off a Triple Bottom consolidation above $1,611 lateral support. It decisively breached the Down Channel’s topside trendline and moved through all the moving averages in November, took a breather during December at around $1,800, held above the 50 EMA, and tapped the 23.6% Fibonacci at $1,832. The price action thus far in January has tapped $1,920 (2011 high) within a tight Up Channel and might have the momentum to challenge the Aug. 2020 and Mar. 2022 all-time highs at $2,075. There were numerous opportunities in the fall to layer in core paper positions at lower price points or scalp trade the intraday price action.

The DMI-ADX is now trending positive with an Alligator Tongue power trend setup, StochRSI is in an overbought condition and could hold a while longer, Momentum, Money Flow, and the Commodity Channel Index (CCI) are nearing a peak, Volume remains steady but unremarkable following the holidays, and all the moving averages are lining up nicely. Gold has enjoyed a substantial rally as the dollar pulled back. The chart remains bullish with the next resistance at $1,980, and be cautious of volatility while scalping intraday trades. Support is wherever the 50 EMA is trending. 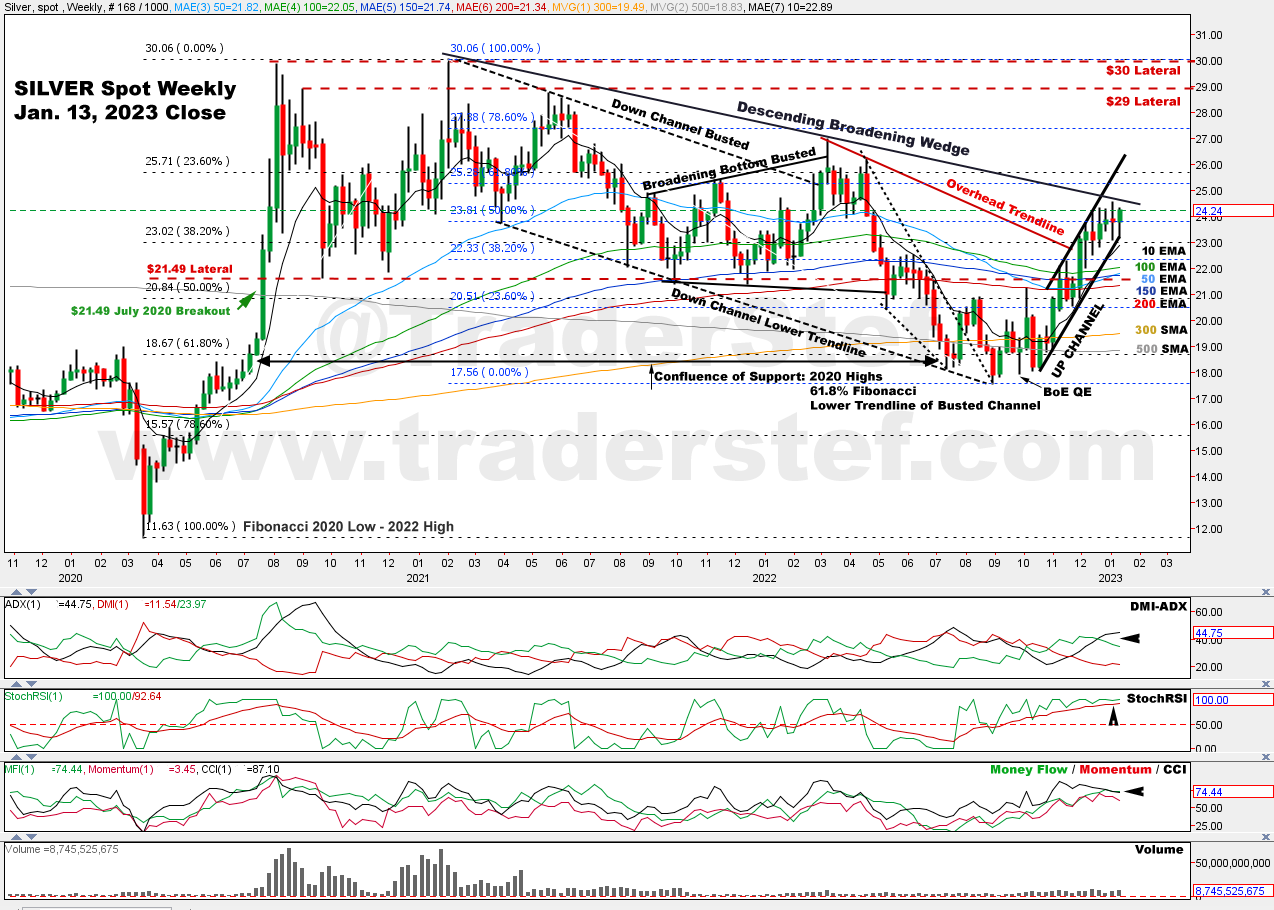 “The price action continues to pivot off a confluence of support noted in July’s analysis and formed a Triple Bottom… Note that there hasn’t been a Death Cross of the 50 & 200 EMA… In order for silver to end its current malaise, it must breakout from the overhead trendline, $21.49 lateral, and leave the 50 EMA in the dust. The chart is neutral until the DMI-ADX reverses to a bullish strength-of-trend signal. In the meantime, there will be opportunities to scalp any upside price action.”

“Silver rallied more than $6.50 off the $17.53 August low to this week’s high of $24.11. A solid Up Channel formed since October and sliced through an overhead trendline and resistance noted last month, consolidated at $21.49 during November, took out all of the moving averages including the 50 EMA, and pierced the last topside trendline (red) this month. There were numerous opportunities this fall to layer in core paper positions at lower price points or scalp trade the intraday price action. I cautioned that $24 could be the next consolidation level heading into the FOMC policy announcement, and that’s where resistance surfaced today with a close at $23.83. The chart is bullish heading into the New Year and winter seasonality, but caution is warranted with year-end profit taking and book squaring in financial markets… Silver’s next topside resistance is the 23.6% Fibonacci level at $25.70 to $26, and support is wherever the 50 EMA trends.”

The price action in silver printed a high of $24.54 last week and continues to consolidate at around $24 within a tight Up Channel with bouts of intraday volatility. The topside trendline of a Descending Broadening Wedge drawn back to Jan. 2021 is a significant resistance level to breakout from, and must be done with conviction if $29 and $30 are to be challenged in the near-term. This week’s candlestick closed as a Hammer Candle and is indicative of additional upside after a consolidation.

The DMI-ADX is in a positive trend but flattening out, StochRSI is in overbought territory, Money Flow, Momentum, and CCI have peaked and are indecisive, Volume is unremarkable with a slight increase since the fall, and all the moving averages are slowly lining up into a bullish stance. The silver chart is bullish but be cautions of continued volatility while scalping intraday trades. The next resistance is $25.70 to $27.50 and support is wherever the 50 EMA is trending.

Will the Economy Collapse Completely in 2023? – Martin Armstrong on Uncensored w/Maria Zeee, Jan. 12 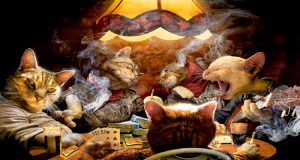