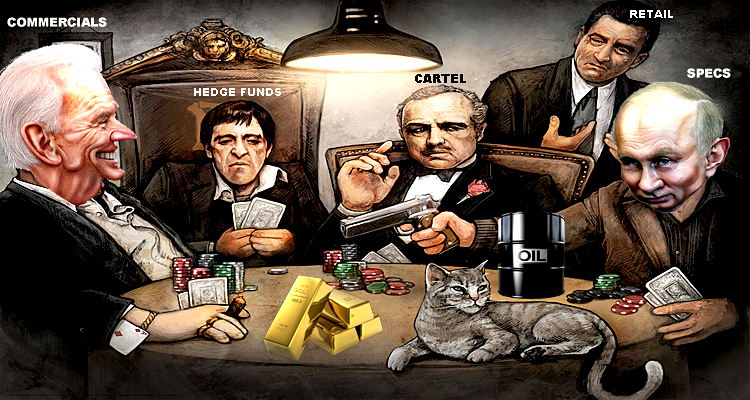 The geopolitical situation in the world took a turn for the worse after publishing last month’s gold and silver technical analysis on Feb. 13. I won’t rant too long tonight about “the Ukraine” (PDF file) and ongoing conflict with Russia that originates from policies undertaken by U.S. and NATO, but I want to at least share a few thoughts before taking a look at last week’s rally in the precious metals. If you need to get up to speed on a war that’s threatening to go nuclear as Google searches for potassium-iodide skyrocket, consider reading “Little Green Men and Metal Poised to Strike” Part 1, 2, 3, and 4 (Twitter thread), along with “Russia’s Retreat From Counterparty Risk and SWIFT Over Ukraine” Part 1 and 2 (Twitter thread).

Colonel Macgregor – “I think Zelensky is a puppet”

It’s stunning to me that U.S. government policy is so focused on its attempt to crash the Russian economy with sanctions. Politicos appear to relish in fantasies that the economic ramifications will remain somewhat contained and not blow up the precarious fiscal and policy blunders in the U.S. Purple elephants and war hawks are gathered around watering holes on Capitol Hill and filling themselves with hope that the government mindset in Russia will simply disappear and a new one will magically exit Ukraine if enough economic buttons can push the bear into a corner. If you have any doubt about those thoughts, consider Senator Lindsey Graham’s call for Putin’s assassination that would set the world ablaze as China’s dragon is breathing down our neck over Taiwan.

“Sen. Lindsey Graham Thursday called for Russians to ‘step up’ and kill President Vladimir Putin amid Russia’s brutal war on Ukraine – then doubled down on the comments Friday morning.  ‘Somebody in Russia has to step up to the plate. Is there a Brutus in Russia? Is there a more successful Colonel Stauffenberg in the Russian military.’” – Fox News, Mar. 4

Military threats over Taiwan are “nothing but scrap iron” – China’s Foreign Ministry, Mar. 2

This war makes it blatantly clear how much people rely on their emotions rather than reason. It is widespread among those I thought possessed the wisdom to know better. The foreign policy establishment that’s currently stomping around Capitol Hill is bringing economic chaos, destruction, and death wherever they go and with whatever they do. Unfortunately, rigged elections or not, we the people are the enablers of this mess that extends through decades of political apathy. The Vice President of the U.S. made a few comments last week and peppered it with her notorious cackle that’s incredibly cringeworthy. The hard part to swallow is that she’s spot-on with the “off-script” assessment. Her statement brings to mind a few famous words that were spoken in a classic movie from the past.

Voters Got What They Asked For – Kamala Harris, Feb. 2022

The pundits and plebes that whined endlessly about gold or silver prices not rising to higher highs fast enough to match their expectations are now staring into a valley of darkness that’s on the precipice of a potential raging bull for all the wrong reasons. The weaponized reserve currency status of the dollar via sanctions and SWIFT is accelerating the demise of any moral authority that remains in U.S. hands. It’s time to assess the charts before I vanish into endless rabbit holes of demagoguery. To view a larger version of any chart below, right-click on it and choose your “view image” option. 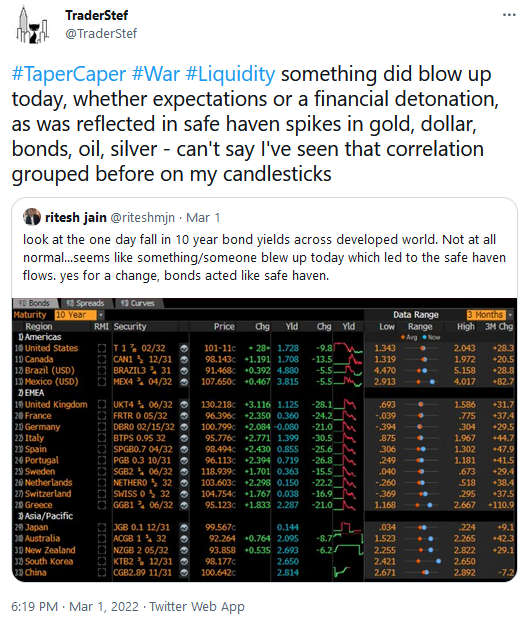 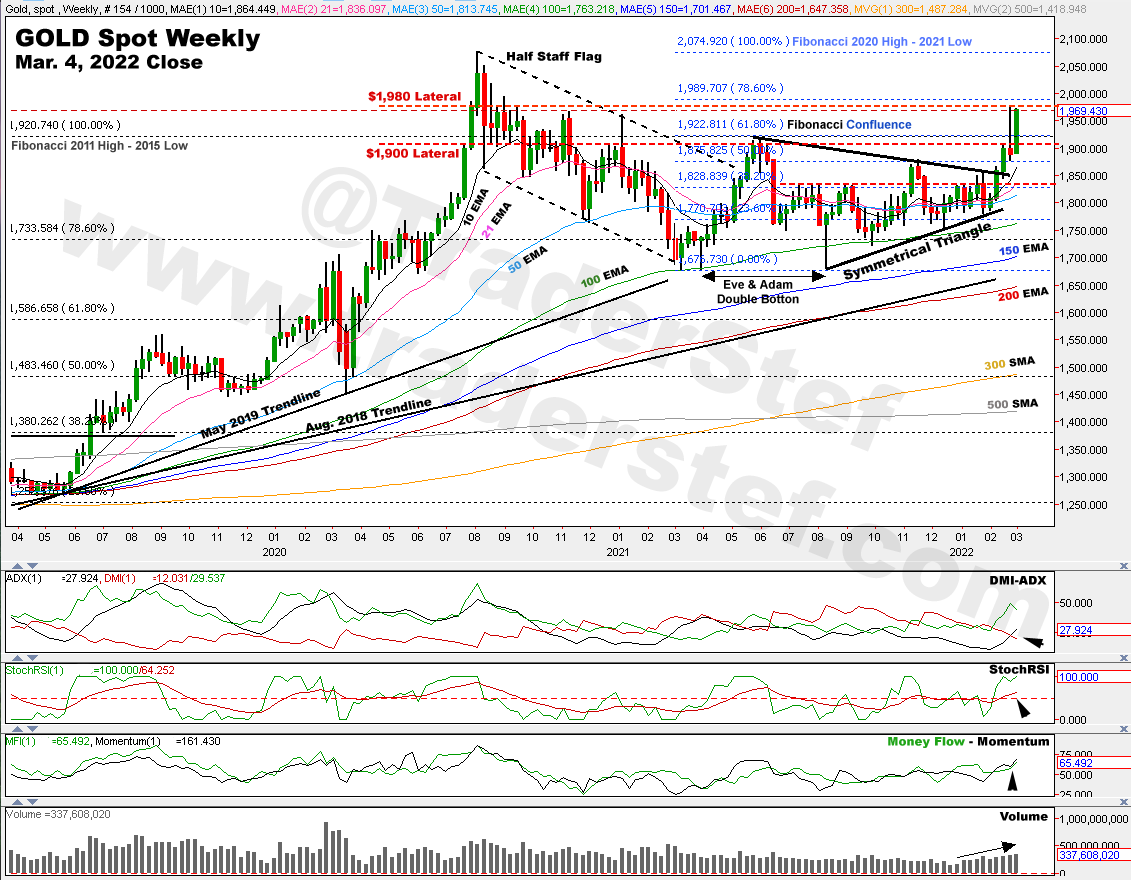 “Since the Aug. 2021 low of $1,680, gold rallied to $1,877 in November and retreated to $1,752 in mid-December, then surged to a high of $1,865 and closed at $1,858 this past Friday on concerns that Putin gave the go ahead for his military to move into Ukraine in mid-February or March. Gold’s technical indicators and studies are a mixed bag, but signals are leaning more bullish than they were in December… Gold is not out of the woods and the chart is ripe for scalping intraday sweet spots. It’s prudent to be patient for a decisive break through $1,980 on much larger buy Volume before layering in large paper positions for swing trades.”

The Symmetrical Triangle pattern on the weekly chart with lower highs since Jun. 2021 and higher lows since August was left in the dust since mid-February. There is still a chance for a Throwback that will test the Symmetrical Triangle’s topside trendline, Fibonacci levels above it, and $1,900 to confirm solid support before challenging the all-time high of $2,075. There is good support at $1,950 as seen on the hourly chart, which is the Neckline of an Inverse Head ‘n Shoulders continuation pattern that was taken out with conviction on Friday. Take note of the Swiss Stair pattern on the hourly chart that provided support during price volatility since mid-February. 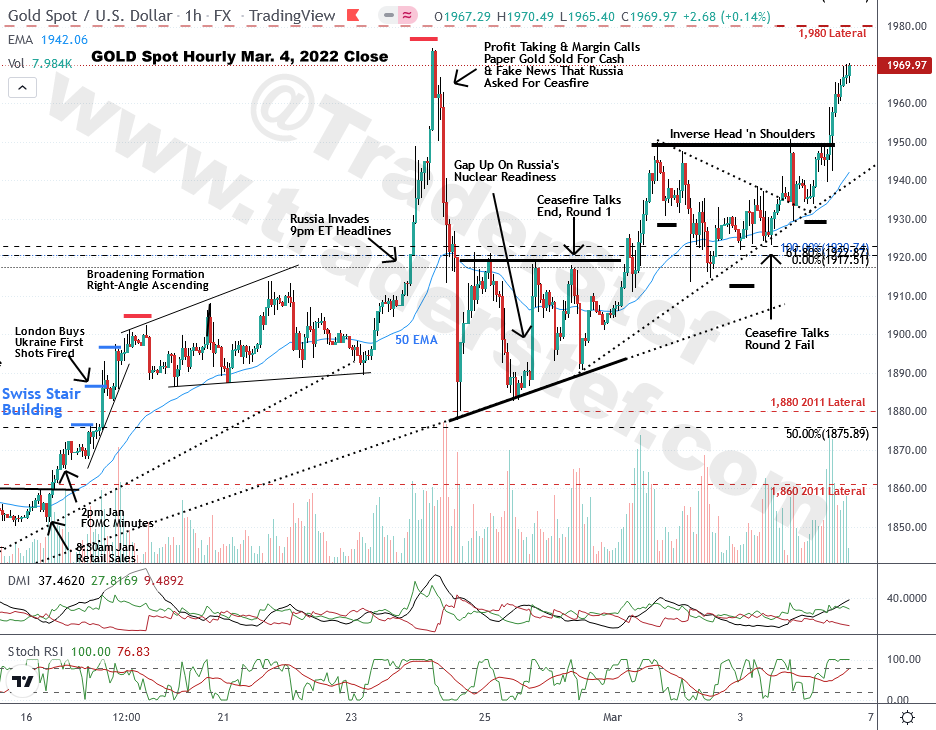 As expected since the fall of 2020, $1,980 is an important resistance level to penetrate as upward progress was halted there over last two weeks. All moving averages on the weekly chart are lined up to support a continuation of the upward trend. The DMI-ADX’s Alligator Tongue power trend set up is hesitating due to resistance at $1,980, the StochRSI is trending upward, the Money Flow and Momentum are rising with strength, and buy Volume is trending higher in lockstep with the price action.

Gold is not completely out of the woods but is making powerful progress, and the chart is bullish. The chart is ripe for scalping intraday sweet spots and caution is warranted until $1,980 is left in the dust before risking large paper positions for a swing trade. 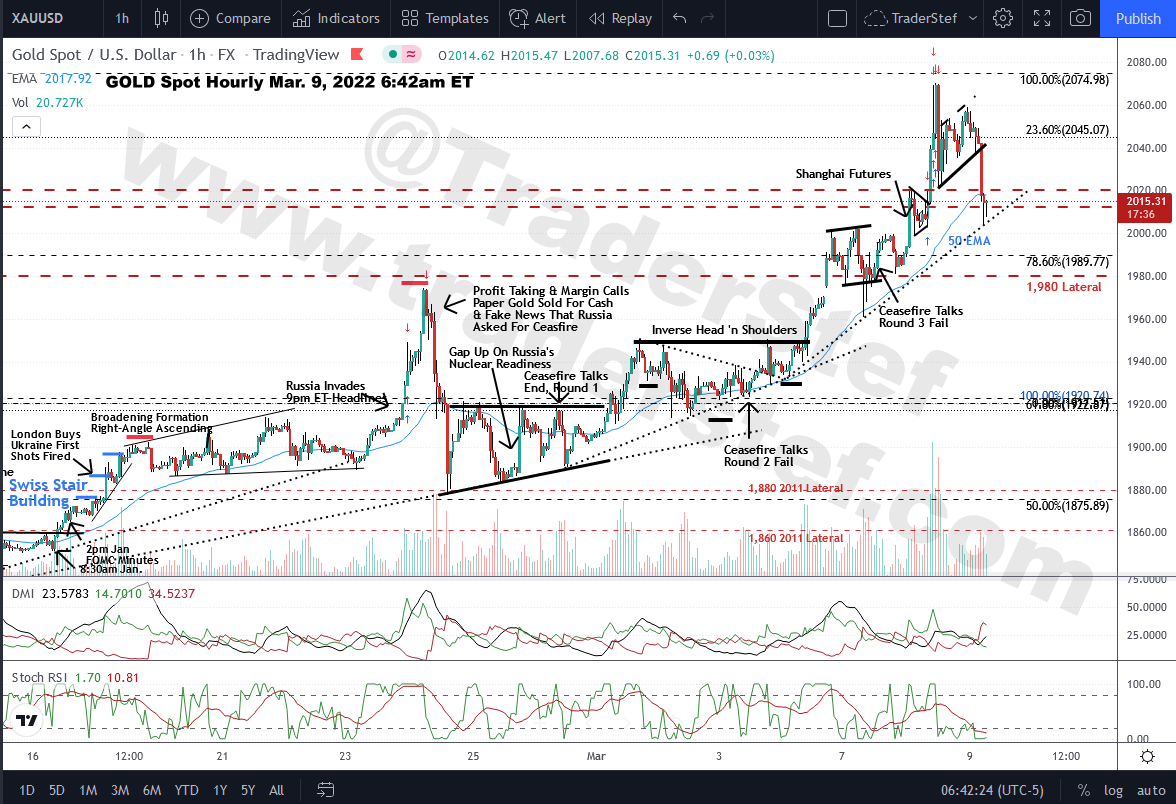 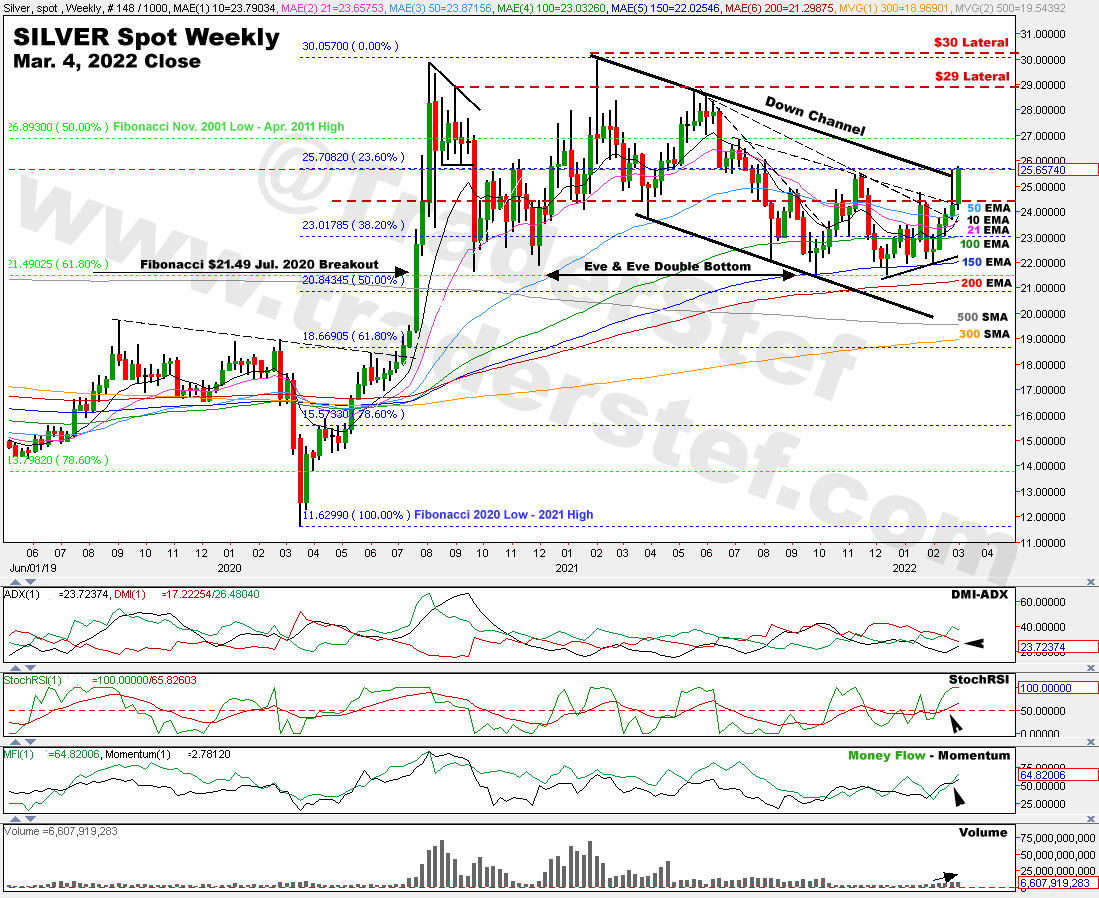 “The silver price is volatile and choppy since printing a $21.42 low in Sep. 2021 and $21.41 in early December. A high of $24.70 was made in mid-January that was followed by a dip to $22 during the first week of February. Silver rallied alongside gold on concerns over Russia and Ukraine with a high of $23.71 and closed on Friday at $23.47… Friday’s rally did not challenge the $24.50 lateral resistance because momentum stalled at the overhead 50 EMA… Topside resistance remains at $23 until the 50 EMA is left in the dust, then $25.70, $29, and $30 for all the marbles to layer in large paper positions for a swing trade.”

The silver price is making progress but not as bullish as gold. The weekly chart closed at $25.66 on Friday and peeped its head above the Down Channel’s topside trendline as the price action was halted at the 23.6% Fibonacci and $25.70 lateral resistance that were noted in the February and December analyses. There is intermittent resistance between $25.70 and $29 but nothing substantial if the upward trend continues with a decisive spike in buy Volume. Take note that the Cup ‘n Handle’s Rimline on the hourly chart is just below $25.70. 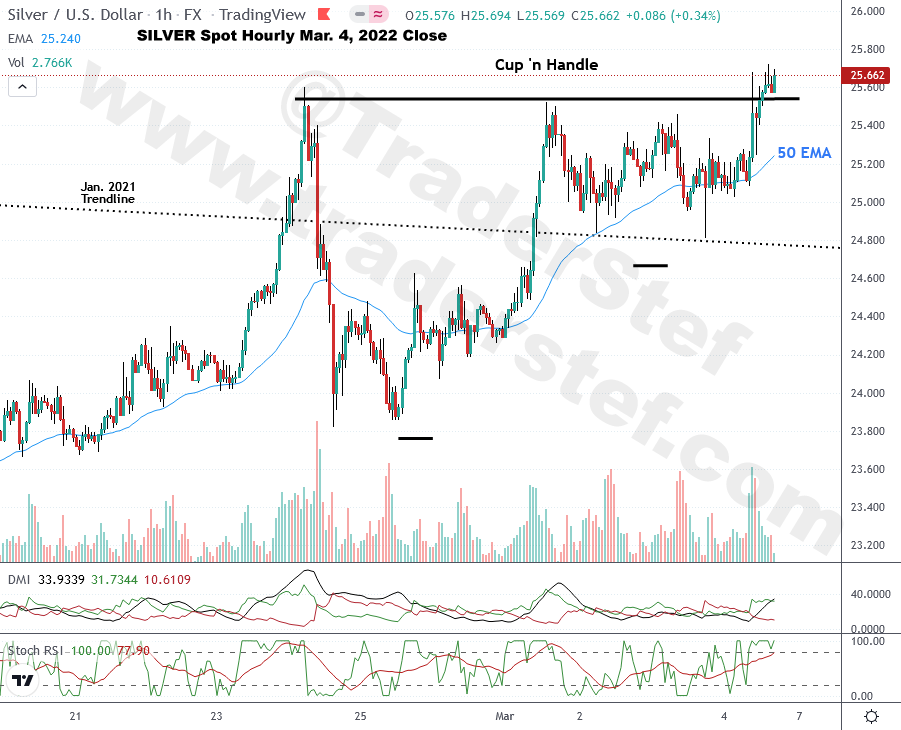 All moving averages on the weekly chart are lined up to support a continuation of an upward trend after the 50 EMA was taken out two weeks ago. The DMI-ADX is attempting to complete an Alligator Tongue setup, the StochRSI is trending upwards, the MoneyFlow and Momentum are rising together, but Volume remains unremarkable despite making some progress since February and is relatively low compared to the fall of 2020 and winter 2021.

Silver is not out of the woods, and the chart is ripe for scalping intraday sweet spots. $25.70 is the last substantial resistance to conquer before $29 and $30 are challenged for all the marbles. Caution is warranted before layering in large paper positions for swing trades until $29 and $30 are left in the dust.

Here are a few recent articles to consider and an interview before closing up shop tonight: 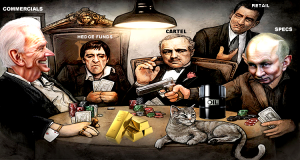