Ever since December of 2016, when the gold price came close to challenging the December 2015 low, the technical picture has been chock full of non-stop, short-term bullish studies and patterns off of that pivot.  So many set-ups have come and gone and metastasized, I lost track in my head. Fortunately, a time-stamped thread of gold charts dating back to September of 2015 on my Twit feed is available for prosperity’s record of perusal. A Twit follower once asked why I do “threads” with hashtags. Perhaps he will read this today and “get it,” as they are, for the record, outside of my head.

Gold has reached another precipice, as if we have not had enough of them following the 2013 smash-a-thon. Yes, “this time is different,” minus a smash, and the reasons are just too numerous to connect all the dots into a comprehensible story that anyone would even care about or enjoy reading. Just as one variable presented itself, another jettisoned to the forefront, resulting in an even higher number of short-term, bullish patterns that have kept piling on top of each other since late 2015.

It truly is freaking meowt because it will not stop!  Forget about any underlying chaos in banking, global stock markets, economic indicators, geopolitics, and precious metal fundamentals lurking below the bubbling surface, because the gold chart visual alone reeks of a yuge royal flush confluence.

Oh, and we have Cold War 2 lighting a big, fat, stealthy JASSM candle on the weekend party cake, on Friday the 13th, mind you, hovering over the potential biblical destruction of Damascus.  All that delivers a higher probability that while sipping hot chocolate in the “live free or die” state as winter refuses to leave my window view, only a brief heads-up is appropriate: 1) Beware of the cartel because a mini-puke at this intersection would fit their usual modus operandi and best interests.  2) The buy volume on the charts printed a rocking record this week.

There are now gold-backed cryptocurrencies for Muslims that conform with Sharia… “In the Islamic faith, it’s believed that economic activity should be based on real, physical assets, not speculation; observant Muslims also do not invest in banking products that offer returns via interest payments. Therefore, many people in the Gulf States and beyond do not consider bitcoin, ethereum, and other cryptos to be compliant with Sharia law. Cryptocurrencies writ large have not yet been officially banned in Saudi Arabia and the United Arab Emirates, but these governments have issued warnings about their citizens purchasing bitcoin. Because of this, Muslim markets have been slower to trade in digital currencies. And there is a lot of money to be made in Islamic finance: Muslim countries contribute about 9% of global GDP. To serve these wealthy Islamic populations, a new type of Sharia-approved crypto is cropping up.  In Dubai, a startup has created a cryptocurrency that is backed to one of the world’s most stable assets: gold. OneGram’s pitch is that each unit of value is backed by a physical gram of gold that is kept in a safe. This therefore limits volatility and speculation, and has been deemed acceptable under Islamic principles by Dubai-based al-Maali Consulting.”  – Quartz, Apr. 8

“Gold is painting a beautiful chart with a 16 month US$225 gain. So many technical points supporting and resisting but the upward path is preparing for a very strong move quite soon. We never know the true reason but try `squeeze.’” – Barry Dawes, Apr. 15

Oil, gold to gain on Syrian strikes, Russian retaliation in focus… “’Gold and oil will extend their gains on Monday, albeit modestly, when the markets open for the first time since Western powers launched a missile attack on Syria…  The news flow is actually better than what it looked like at one point during last week as the strike was surgical, followed by a pullback. Reports show a lot of care was taken not to hit Russian targets, which is a good sign and the market should take heart from that,” said Salman Ahmed, chief investment strategist at Lombard Odier investment managers in London.” – Reuters, Apr. 15

On to the charts.  To view a larger version of any chart, right-click on it and choose your “view image” option. 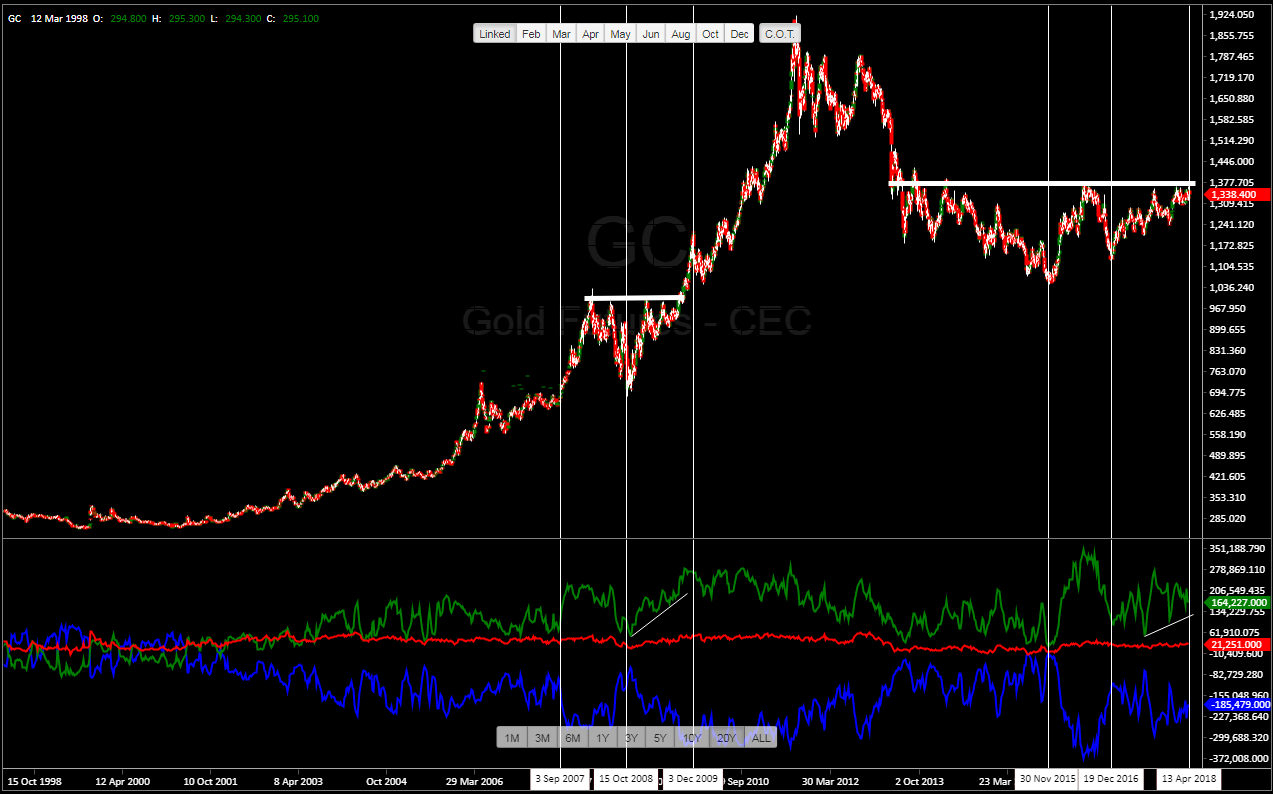 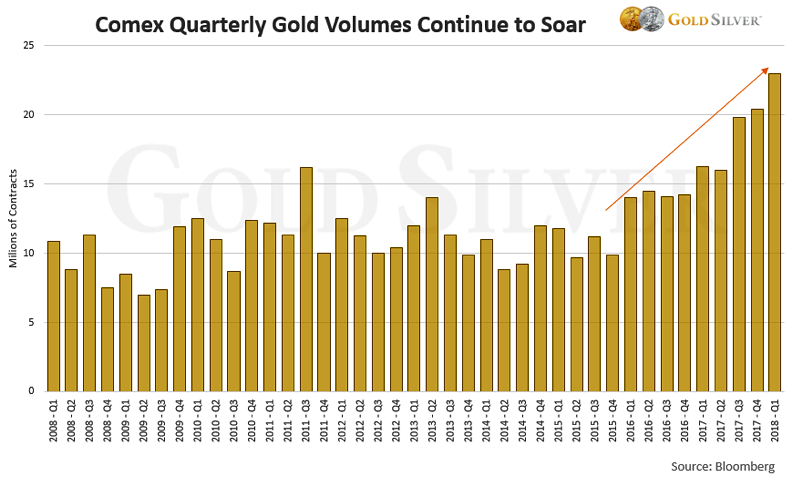 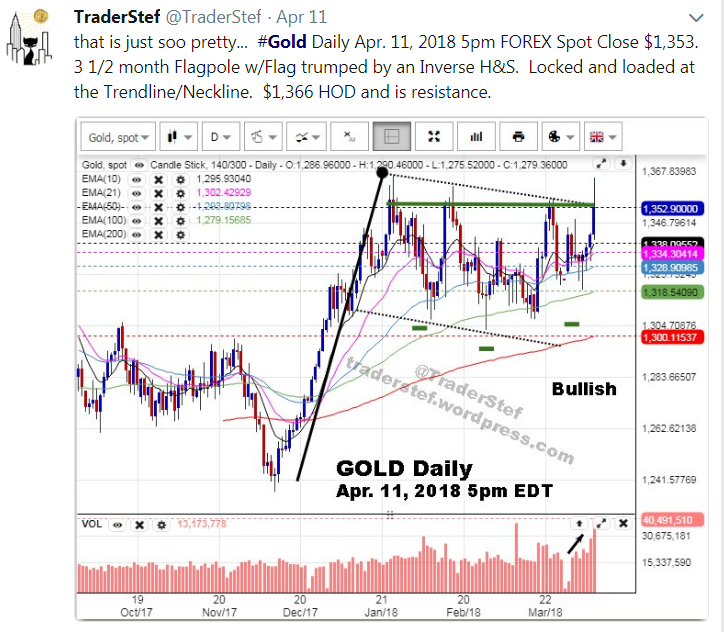 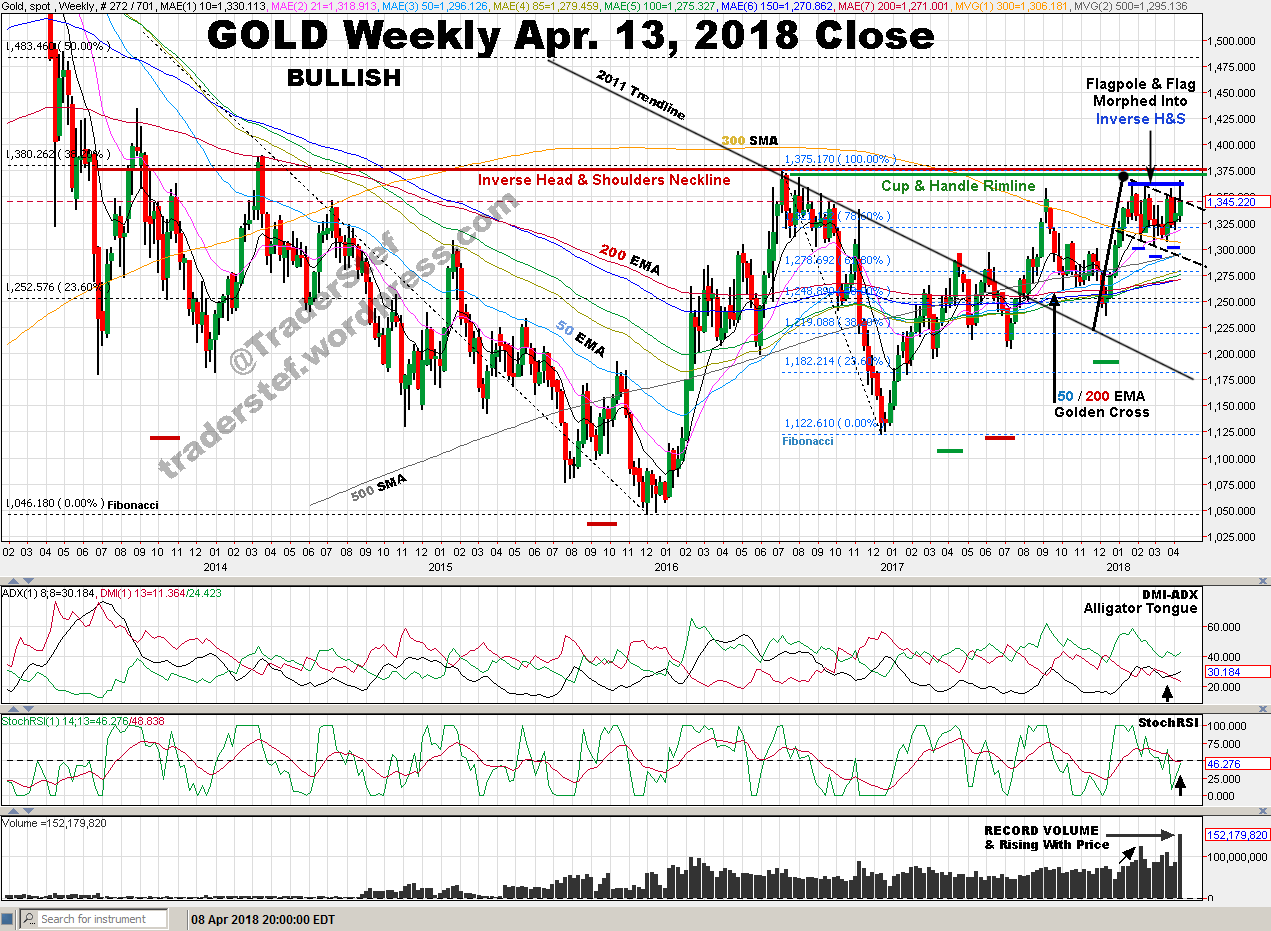 The most important study on this week’s chart is the record volume print. With an Inverse Head & Shoulders where you have buy volumes rise along with the price after the center of gravity low (head) that continues to rise through the remainder of the head and right shoulder, it is a very bullish indicator that substantially lifts the odds for upside breakouts. It is also better for the price to pull back after testing a neckline, then pivot to a breakout for a sustainable rally. The volume was not just higher this week, it blew away all previous counts. The rising volume pattern not only occurred through the right half of the longer-term Inverse H&S drawn back to 2013, it’s also occurring with a vengeance on the shorter timeframe Inverse H&S within the right shoulder of the longer-term pattern. A double whammy.  Not to mention, both Cup & Handle patterns remain in play.

The bullish Golden Cross that took place during Sep./Oct. 2017 continues to spread upward. The DMI-ADX has shifted to a more positive stance with an Alligator Tongue set-up. The StochRSI rolled over to the negative for a few weeks but has pivoted back up and shows a good chance of breaking out. All moving averages remain south of the price action. I still see the $1,380 Fibonacci level breakout as imminent.

As noted earlier, beware of the cartel because a mini-puke at this intersection would fit their usual modus operandi and best interests. If they fail, the mother of all short squeezes could take hold.