Gold Mining Stocks Follow-Up and Natural Laws of the Universe

If you take some time to leave the farm, your mind will be free. That realization is driven home while being confronted with repetitive voice patterns from folks that are yearning for yield and who blindly swim into counterparty risk pools they normally avoid like the plague. It’s causing me to pause and reflect again as we approach 2018.

Blaming (rather than citing) the Federal Reserve’s financial repressive monetary policy does not cut it any longer, as once you become aware, responsible choice inevitably presents itself, particularly when other people’s money is at risk.  Take note of that mirror in the bathroom, as it keeps telling you that no matter where you go, there you are. I also recently read that cryptocurrencies “are different” and technical analysis does not apply in that New World Order.  Out to pasture, you old fool; get hip to the blue pill.  New words for pattern analysis have also appeared via the precious minds of crypto converts in an attempt to replace established terminology based on historically-proven methodologies. Changing a label to contemporary flare for common core misfits because you refuse additional education or brief due diligence you feel is too excruciating to protect your capital due to a newfound bias of ingredient does not change the recipe, and it’s deceptive to yourself and all those that hold your opinion in high regard. If it makes you feel better about mortality at the expense of others, then laissez faire.  The identity of the following quote is protected. 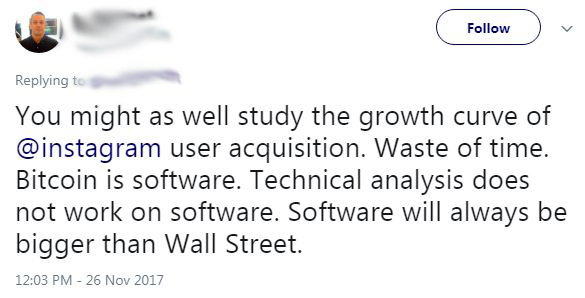 New toys to toddle are only different because it appears to herded peasants that they have a “new” (not really) financial vehicle to play with that cancels out risk, inflation, and all other forms of nasty fiat disease.  Thank God for civil wars to counter centralized utopian fantasies.  Fortunately, math that’s encoded within basic laws of nature (such as what Mr. Fibonacci discovered) underlie all forms of technical analysis and have not and will not morph into another one of Goldman Sachs’ Muppet shows.  Market results are a result of said laws.  In case you missed it, Quants code technical analysis fundamentals into those “resistance is futile,” Borg-like algorithms, which are also used with HFT, which is… software.  I digress.

Absolutely nothing in life is 100% accurate or perfect, except for the eloquent unfolding of our universe, despite how much we try not to die with access to FOMO, and alternatively a fear of the unknown.  It is, however, comforting to know that tools exist using Fusion Analysis and some mercantile sense (aka gut instincts) that provide a respected and proven hedge against the unknown in the financial realm of depositing your capital, if you so choose.  Your children and their children will appreciate you for seeing through repetitive malfeasance of the masses.

“Every movement in the market is the result of a natural law and of a cause which exists long before the effect takes place and can be determined years in advance. The future is but a repetition of the past, as the Bible plainly states.” – W.D. Gann

Natural Time Cycles: A Dow Forecast For 2018-2020… “TIME is the most important factor in determining market movements and by studying the past records of averages or individual stocks you will be able to prove for yourself that history does repeat and that by knowing the past you can tell the future.” – Real Investment Advice quotes W.D. Gann, Dec. 2017

“No truth meets more general acceptance than that the universe is ruled by law. Without law, it is self-evident there would be chaos, and where chaos is, nothing is… Man is no less a natural object than the sun or the moon, and his actions, too, in their metrical occurrence, are subject to analysis… Very extensive research in connection with… human activities indicates that practically all developments which result from our social-economic processes follow a law that causes them to repeat themselves in similar and constantly recurring serials of waves or impulses of definite number and pattern… The stock market illustrates the wave impulse common to social-economic activity… It has its law, just as is true of other things throughout the universe… The causes of these cyclical changes seem clearly to have their origin in the immutable natural law that governs all things, including the various moods of human behavior. Causes, therefore, tend to become relatively unimportant in the long term progress of the cycle. This fundamental law cannot be subverted or set aside by statutes or restrictions. Current news and political developments are of only incidental important, soon forgotten; their presumed influence on market trends is not as weighty as is commonly believed.” – Miners Are At Another Inflection Point, Avi Gilburt quotes R.N. Elliot, Dec. 2017 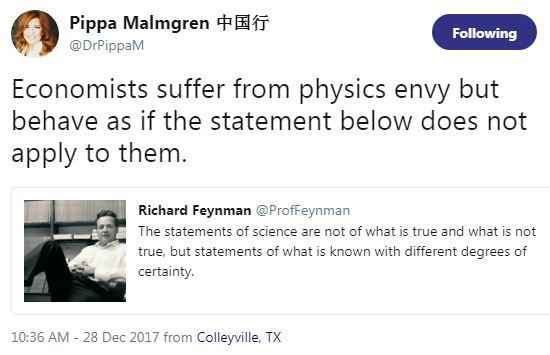 On another note, did you know that common core math education teaches 2+2=5?  Software and any technology, including a blockchain, would collapse by adopting such nonsense, and it speaks volumes about the mindsets we are dealing with in an evolving technological Borg ship.  It belongs in philosophical spheres – not to be used as a mathematical circle-jerk designed to dumb down the willing before they have matured into critically-thinking beings.

As promised, here is a follow-up from my recent Dec. 21st post, “Minding the Gold Mining Stocks and Some Rising Charts to Consider.”   I am reposting each chart with its notes, then following up with the chart from today’s close, Dec. 28th.  Let’s see how the four performed.  I consider trades like these to be bread and butter work. They’re very low risk, with reward dependent upon position size.

“In addition, after going over a couple hundred mining stocks, I added a few choice individual charts that are leading the pack from a technical point of view.  My primary filter is high volume to ensure tradable liquidity on a daily basis for scalps and swings, then all subsequent studies can be considered.  To view a larger version of any chart in this article, right-click on it and choose ‘view image.’”

Freeport-McMoRan – FCX weekly chart… “FCX has consistently put in higher lows since December 2015, and the topside trendline of an Ascending Triangle since December of 2016 has been breached for the last two weeks.  The price is currently sitting just above the 200 EMA by fifty cents.  There is not much resistance to the price on the upside.  The DMI-ADX is positive, and the StochRSI is showing strength.  As with the ETFs, this chart could use a nice bump in volume to assist in a decisive takeout of the 200 EMA so that the price can move along without hindrance. A near-term target is $22.” 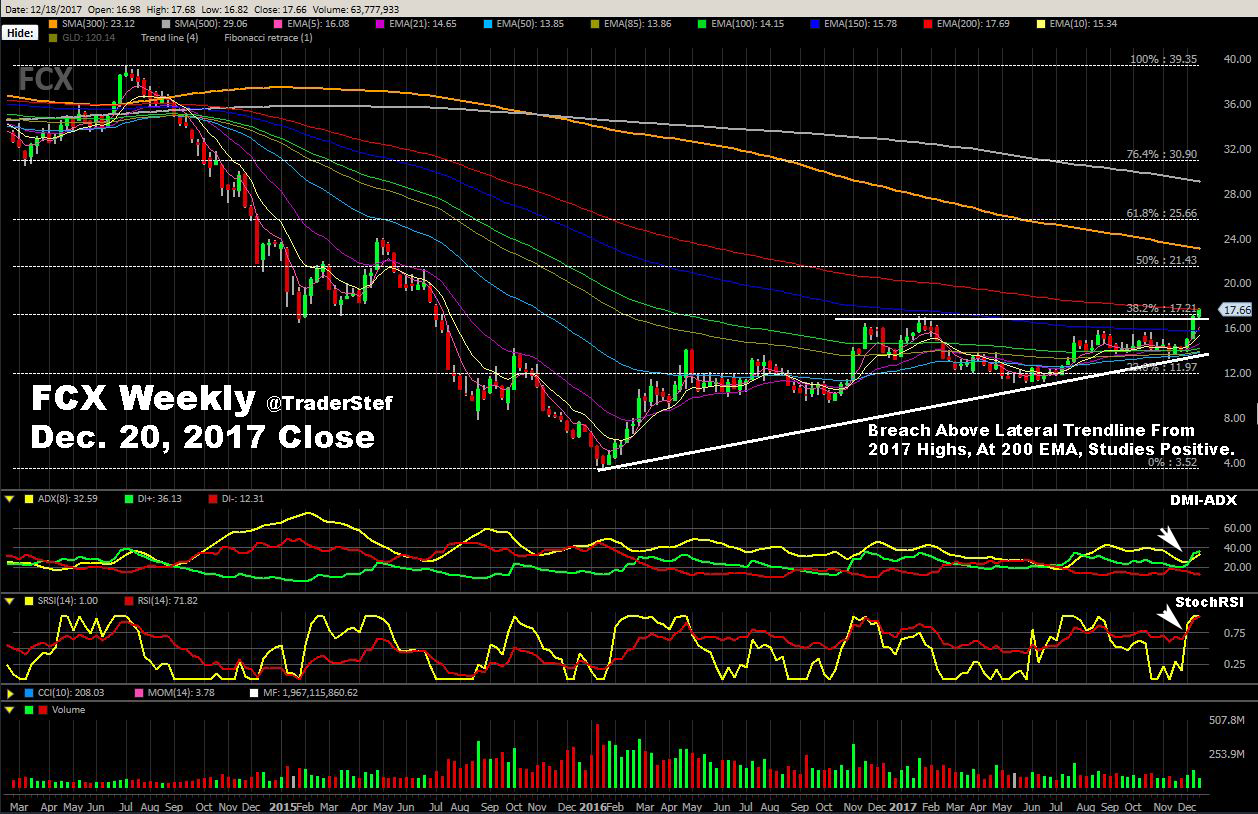 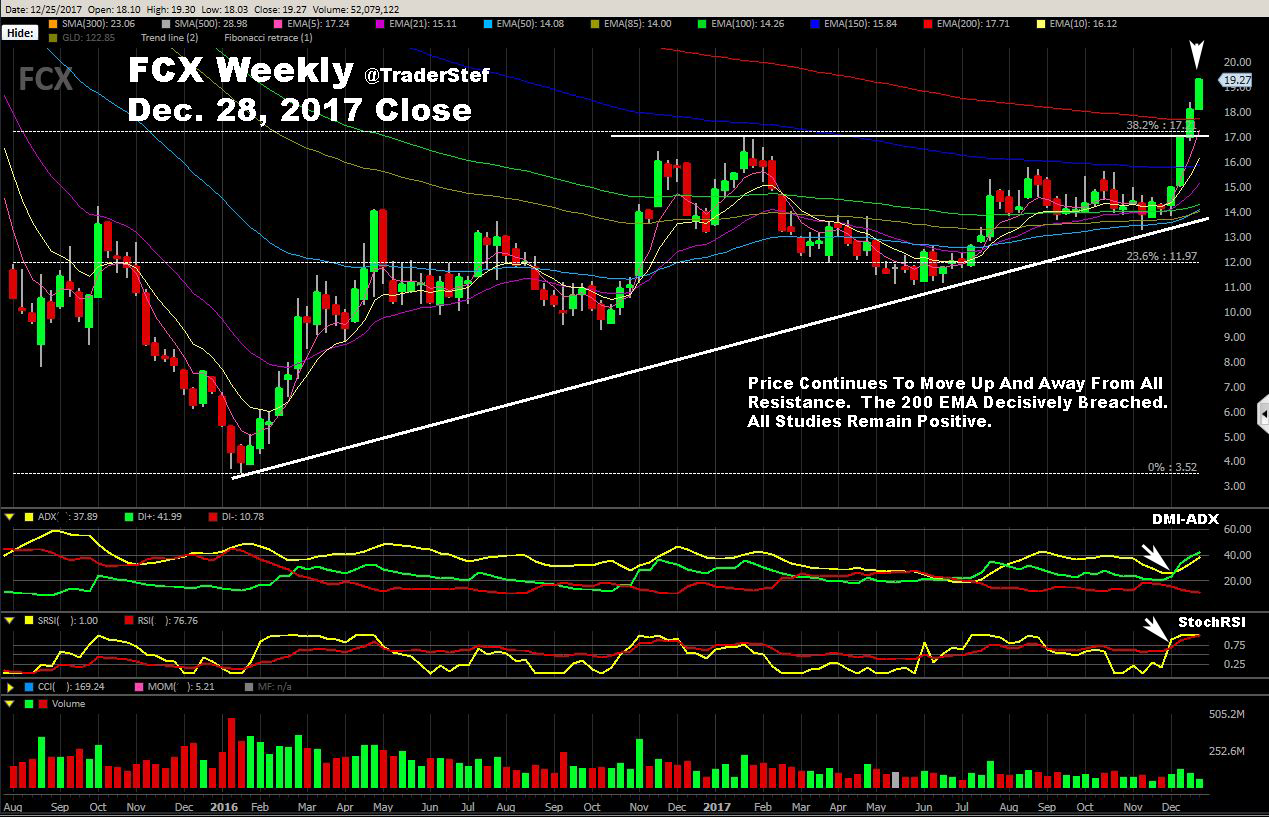 VALE Dec. 20th weekly chart analysis… “VALE has a very similar look to FCX.  One significant difference is that volumes remained stable, even during its capitulation phase in the second half of 2015. It has had a steady overall price movement without substantial swings, and it has consistently put in higher lows since December of 2015.  All of the EMAs have been left behind, and the 50/200 EMAs are about to make a bullish Golden Cross, as the price is challenging the Ascending Triangle’s topside trendline.  That topside trendline is also the rimline of a bullish Cup and Handle. The DMI-ADX is positive, and the StochRSI is strong.  A near-term target is $15.” 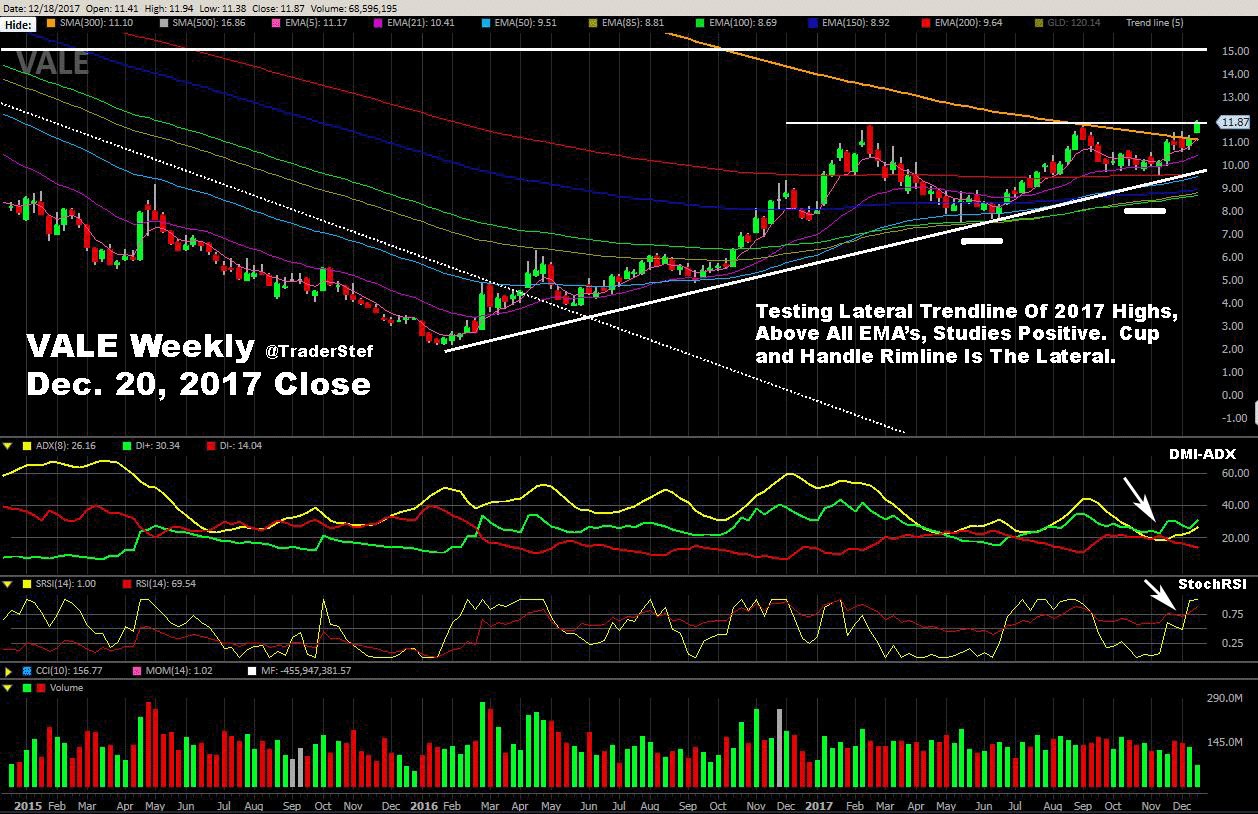 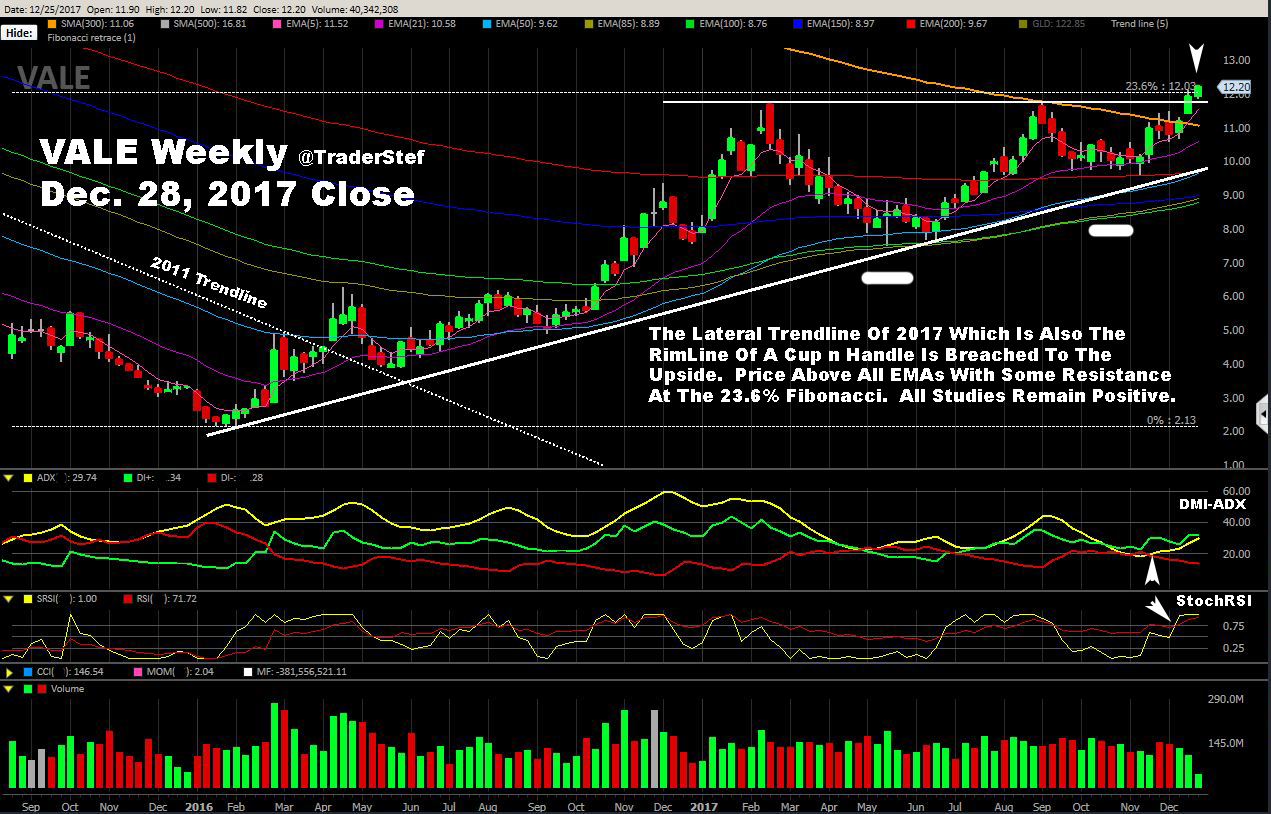 BHP Billiton Dec. 20th weekly chart analysis… “BHP looks similar to VALE and FCX, except there is no Ascending Triangle, but rather a short-term lateral trendline with a high of $44.62 to conquer from September of 2017.  The price has taken out the 200 EMA and must decisively take out the lateral for it to continue forward.  The DMI-ADX is setting up with positive momentum, and the StochRSI is upper bound, with a history of remaining on the high side during extended price moves.  Volume could use a kick, but the accumulation phase that took place immediately after 2015 came with solid buying volumes that put in a good base.  A near-term target is the low $50s.” 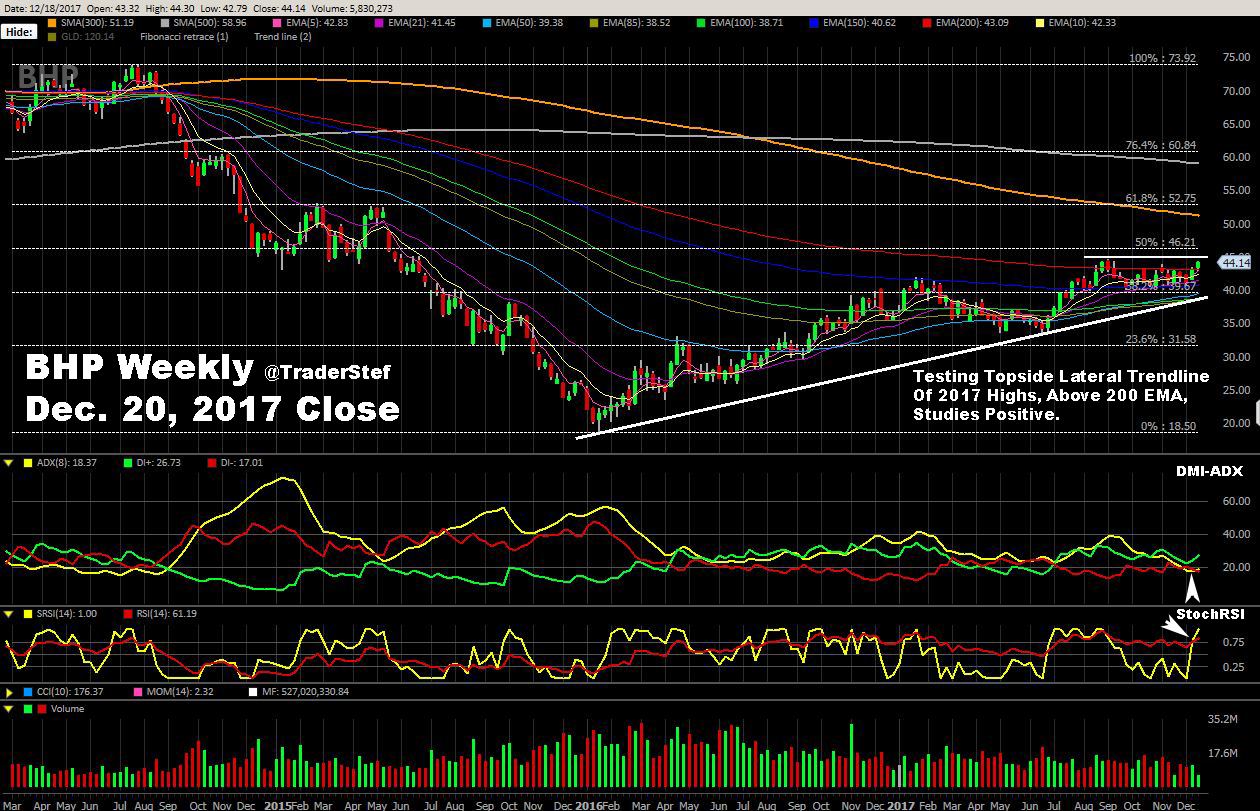 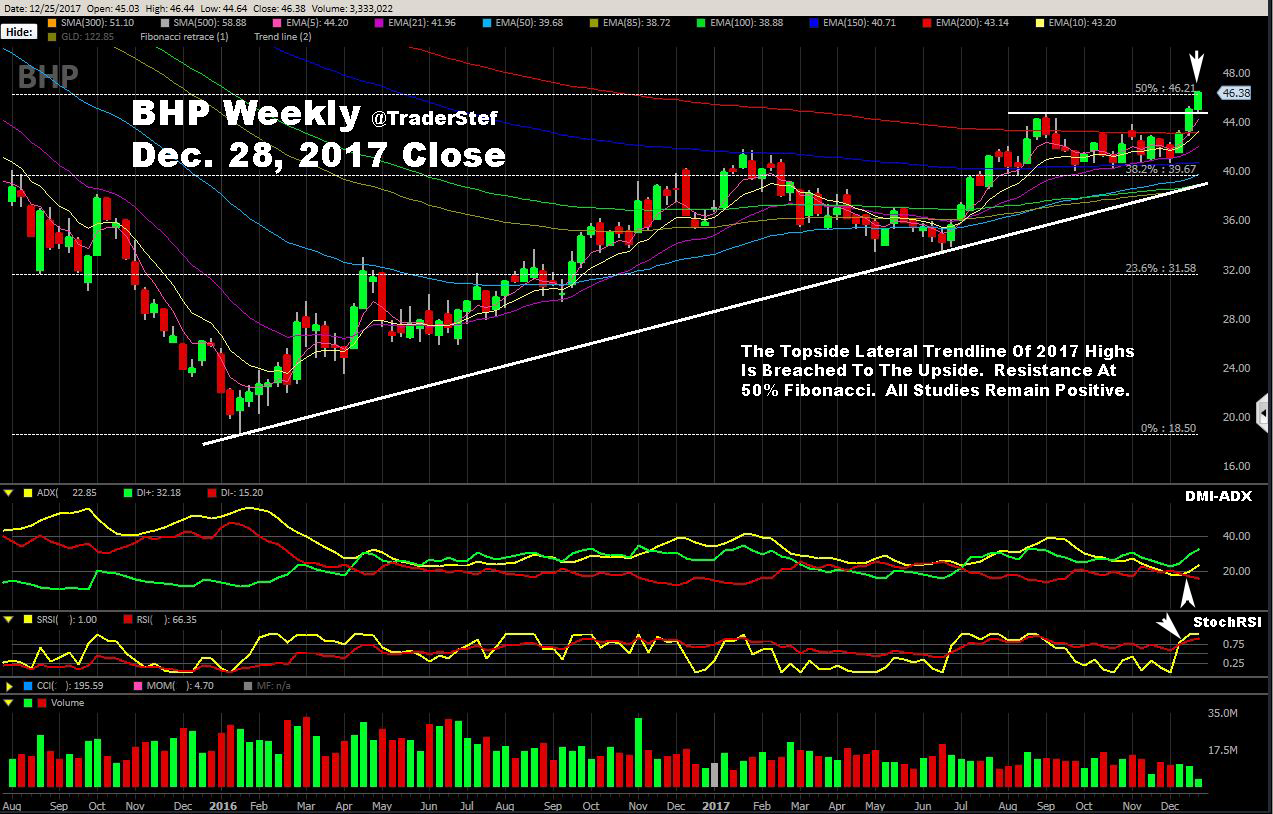 FSM (Fortuna Silver Mines) Dec. 20th weekly chart analysis… “FSM has decisively taken out the topside trendline drawn back to August 2016, as well as all the overhead EMAs.  The DMI-ADX has formed a classic Alligator Tongue set-up, which is very positive for momentum in the near-term.  The StochRSI is also showing strength, having reached its upper bound range, but could continue for an extended period of time, as it has done so in the past.  The volumes are looking good compared to 2015, and selling volumes look to have tapered off in capitulation while higher buying volumes are settling in.” 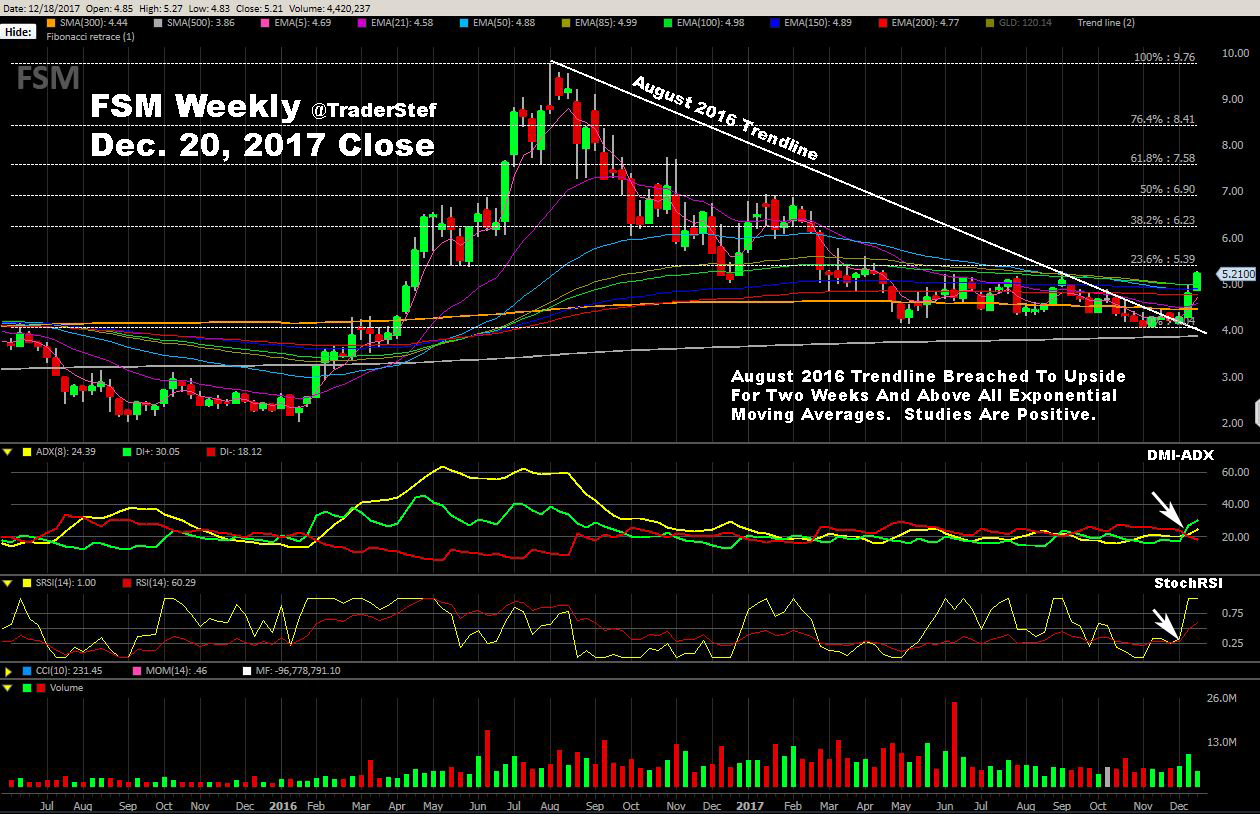 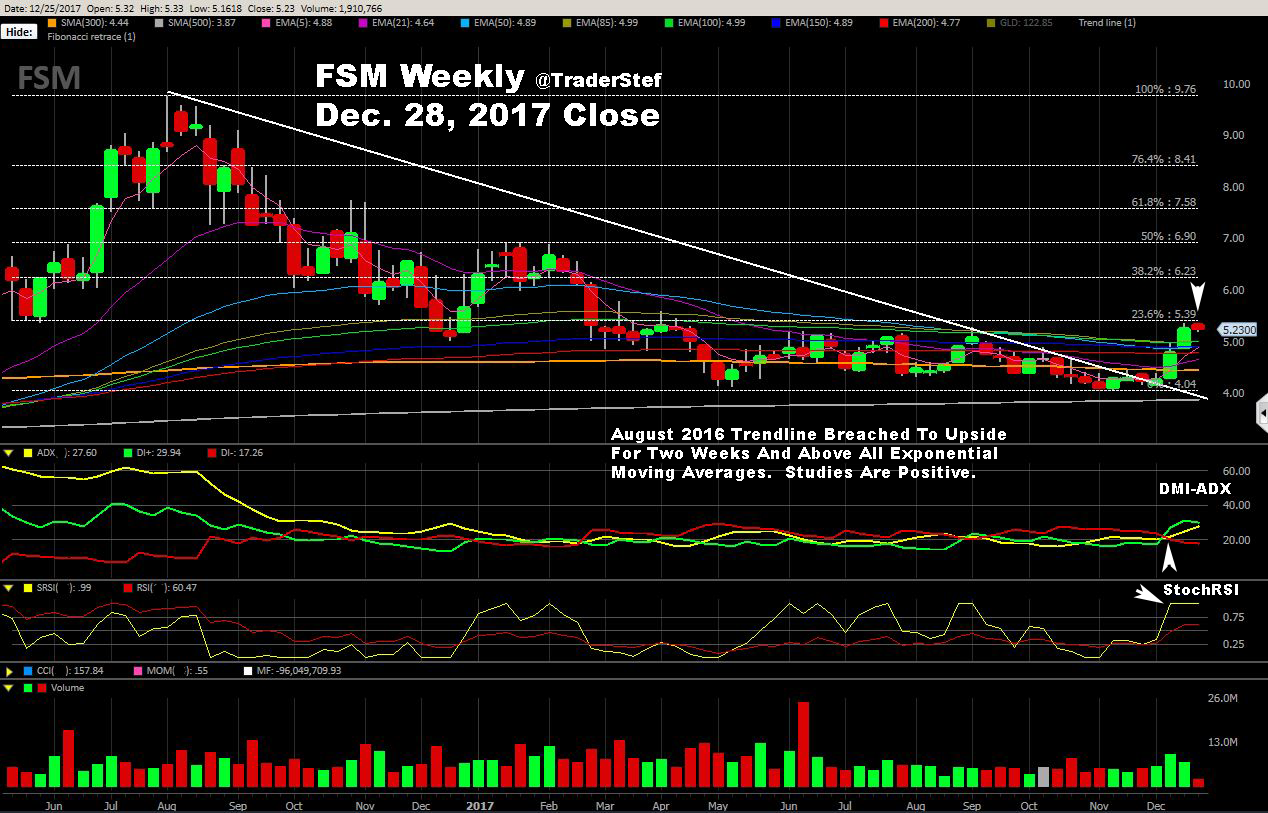