The November reading of U.S. Consumer Prices Index (CPI) showed a month-on-month drop of 0.3%, as released on Wednesday December 17th. The CPI is a proxy for inflation. It stands at the lowest point since early 2009 (courtesy of Zerohedge). Interestingly, without taking energy and food into account, there was a price increase of 1.7% year-on-year. We all know that these official figures are manipulated to the extent that they have lost their credibility. Nevertheless, the data are another confirmation of strong disinflationary pressures in the economic system.

That is important information for precious metals. It is not primarily the absolute rate of inflation that is relevant for the gold price, but rather the rate of change of inflation, i.e. disinflation. The ongoing collapse in the oil price is strengthening the disinflationary trend.

Gold is still holding up quite well, given the disinflationary trend. At least, the yellow metal has refused to break down so far, hovering at the lower end of its long term trading range. One of the supporting factors is undoubtedly the recent fear in the euro area. Risk in the European periphery has been rising in the last weeks, as evidenced by a rising yield spread between South European countries vs Germany. With the prospects of Greek elections at the end of January, and a victory of the anti-European party in the cards, the real break of the European Union is as real as it has never been before.

The difference with a couple of years ago is that central banks stand ready with their monetary bazooka. A banking crisis or a government bankruptcy would probably be nothing more than a temporary deflationary episode as central banks would intervene and increase the probability of more inflation.

Meantime, the price of gold remains steady, being in a tug of war between opposing forces (disinflation and a rising U.S. Dollar vs fear and loose monetary policies).

The physical market shows a clear trend of increasing tightness. We wrote about that in our last commentary.

When taking all these trends together, the prospects on stability in the long run are not that great. Nobody knows if and when we will hit an extreme scenario, but would it occur, then gold owners will be very well protected. In case of a deflationary bust, people would flee to physical gold for protection. In an already tight physical gold market, it would trigger a shortage. In the other extreme scenario, central banks would hyperinflate their currencies. Look at Russia today. Although the conditions are truly different, the end result is comparable: a sudden but aggressive spike in inflation. That is where gold’s inflation protection comes into play.

Let us be clear. We are not saying that gold will fare well in ALL scenarios. There are quite some scenarios between the two extreme ones we just described in which gold will not do very well. But one thing is for sure, thinking of gold in today’s conditions does not make too much sense. Pundits in mainstream media don’t find value in gold because they are thinking in today’s terms, with the perception that the monetary system is under control. Contrarian investors hold gold because they don’t trust that perception. 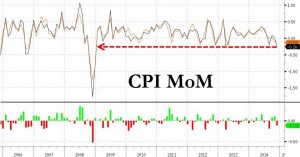 The November reading of U.S. Consumer Prices Index (CPI) showed a month-on-month drop of 0.3%, as released on Wednesday December 17th.