Gold Short Squeeze Out of a Commercial Bear Trap

Feeling a little dazed and confused is par for the course when navigating twists and turns in the gold market. There is a lot to cover this evening, so let us move right to the most recent Commitments of Traders (COT) report and gold chart technical analysis. To view a larger version of any chart, right-click on it and choose your “view image” option. If you have not already, I suggest you listen to the following interview before going any further.

Bloomberg Intelligence Senior Commodity Analyst Mike McGlone shares the indications futures markets are providing for the future, with a focus on gold and commodities – Bloomberg, Sep. 25

As a graceful gesture, I will not reveal any names of the following pundit(s) who attempted to debunk the importance of commercial traders going net long. The article focused on the ‘90s markets vs. today. Here is an excerpt from that recent analysis…

“There is a fallacy now spreading throughout the precious metals world… Gold’s Commitment of Traders (COT) Report, and the claim of the bullish setup that is being purported on account of the net long position by commercial traders and net short position by large speculators. Indeed, not a week goes by that we do not see articles published claiming that this myth is in fact true. We will not name any names here in this article, because the fallacy is nearly universally believed, and a quick Google search for ‘Gold COT report’ will reveal dozens of such misleading articles. The time has come to set the record straight.”

The dynamics between the Open Interest (OI) levels and net long or net short positions within the COT vs. the gold price and its fundamentals throughout the ‘90s carry substantially less weight when compared to the current set-up. The technology sector and related equities were the FOMO darling for investing throughout the ‘90s, which culminated into a Dotcom bust. Underlying stresses in global markets were relatively muted and did not metastasize until the late ‘90s, with financial events such as Thailand’s defaults triggering a market crash in Asia, Russia defaulting on its sovereign debt obligations, and the bankruptcy and subsequent Fed bailout of Long Term Capita Management.

When gold put in its spot low of $251.70 in August of 1999, the NASDAQ was launching into its final bubble leg that lasted until February 2000. On the fundamental side of gold, Brown’s Bottom began in 1999 when the U.K. started to sell off its gold reserves at the bottom of the gold market, and the commercial traders were in the process of building their most recent net long position until the summer of 2001.  Central Banks’ also flipped to the net-buyer side of the equation instead of selling over the last two decades.  Need I remind everyone the relevance of 9/11 in this whole equation? In my article “Smart Money Ace Up the Sleeve and a Gold Chart Update” (Part 1), I pointed out the following in regard to the commercials’ strategy as it exists thus far in this century.

“It is detrimental to the understanding of gold and silver price action to realize that smart money is always probing the opposite side of the trade, meaning they short the rising trend and momo plays, then ladder into long positions in the low-risk zone of downtrends. Carefully read the following until you understand it without a doubt and can repeat from memory. I inserted a few explanatory notes in parenthesis for the unseasoned.

‘It really is quite simple but critical to understand this – bullion bank (commercials are smart money in this wash and rinse scenario) selling caps gold to the upside as they attempt to eat through the plethora of bids in a rising market. They cannot hold back the rise (momo play) in gold but they attempt to contain it. Once upside momentum begins to wane, the technical’s turn and then the hedge fund (large speculators) money begins exiting as longs are liquidating. It is into this long liquidation that the bullion banks do their short covering as they lift the shorts by buying them back. However, and this is the big key to understanding gold, the biggest physical buyers of gold on the planet (including the Eastern Central Banks) who only buy when they believe gold is now ‘cheap,’ step in and actually compete with the bullion bank buying. That forces these perma bears to rapidly cover shorts at a much faster clip than they would prefer. After all, if the speculative (large and small spec) crowd is in the process of throwing away their gold (particularly after a algorithmic or cartel arranged mini-puke at a key technical level), why get in the way? Let them throw away as much as they can and the bullion banks can leisurely continue their short covering letting the market sink lower and lower as they profit all the way down. The problem that they have is the huge physical market in gold prevents them from having the luxury of sitting on their hands while the market drops lower (sometimes nearing the miners’ average cost of production per ounce). Therefore, they are forced to buy back at a much faster clip. That is what drops the open interest down to near the same levels as the last upleg began but leaves the price at a much higher level than the initial breakout run.’ – Trader Dan Norcini –Just the Facts, Feb. 2010”

I noted the following in “Smart Money Ace Up the Sleeve and a Gold Chart Update – Part 2” on Aug. 26.

“Despite the fraudulent paper chase, seasoned precious metal investors keep eyes on the data because it offers clues on low-risk entry points for physical, long-term core positions, as well as for paper swings and laddering core positions. As usual, the commercials were happily covering stale shorts and adding longs in earnest while the large specs (hedge funds) drove the algorithmic downside momo play. Commercials began accumulating in earnest, with record volume spikes beginning on Jun. 25, marking the first low-risk zone at $1,240-$1,260, then tighter zones all the way down to the $1,160 low… The return to an uptrend in gold is well overdue in extremely oversold, lopsided conditions. There is too much focus in the financial press about the large spec short positions, while ignoring what the commercials are doing. Gold rallied nearly $48 last week, and all I heard were crickets in the arena.”

Gold COMEX Futures vs. COT 20-years via TimingCharts as of the data available last week… 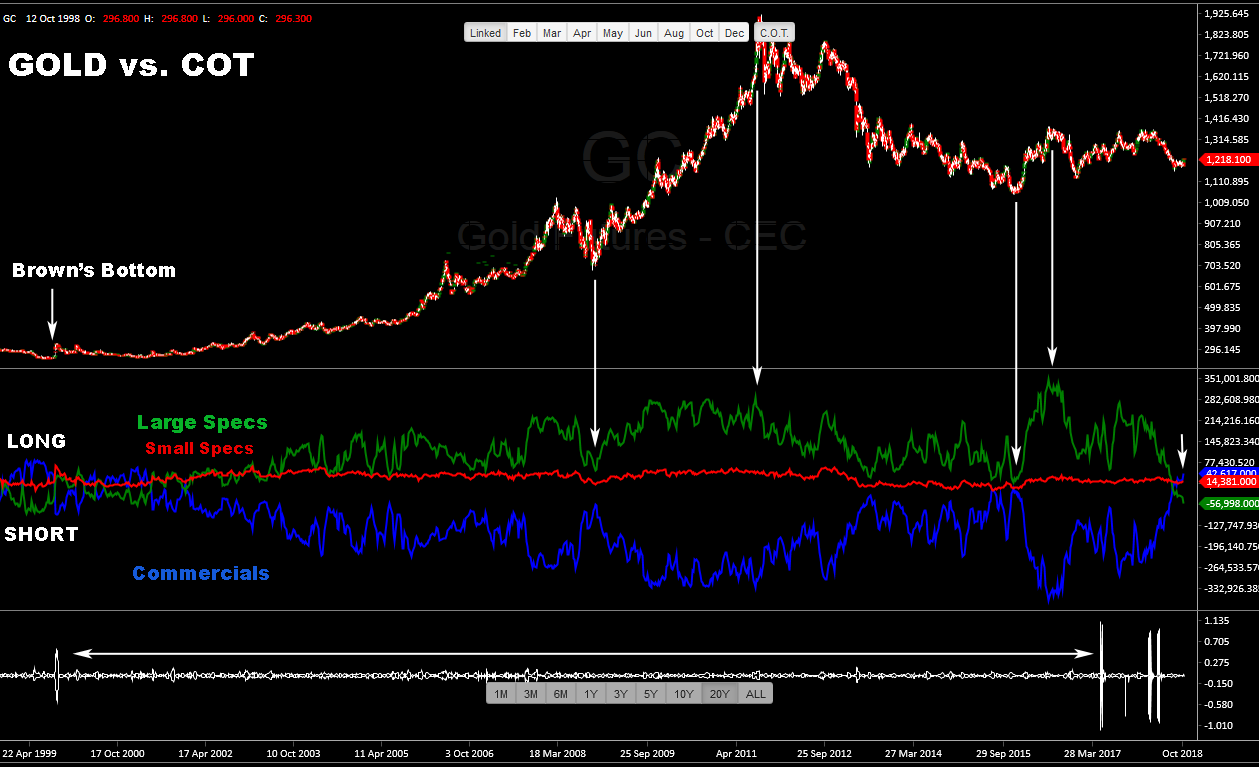 The annotations and arrows on the above chart emphasize Brown’s Bottom in relation to the commercials going net long late in the decade. A few other low and high points are arrowed that were not net short or net long extremes, and they emphasize that the commercials are always on the opposite side of the trade for the reasons noted above so eloquently by Trader Dan. The commercials have been accumulating long positions since early summer and are now in net long territory not seen since just prior to 9/11, with the large specs in way over their heads in short positions. The line on the bottom is a study few may recognize or know of, and I have chosen not to identify it at this time but included it to drive home an additional visual with the commercials going net long at the turn of the century vs. now.  Gold has advanced $72 since its low in August, 2018.

The following are one year of COT reports overlaid with the weekly gold chart. Take note of the commercial category data. The extremely lopsided positioning is beginning to produce an upside price trend with several short squeeze bursts since August. 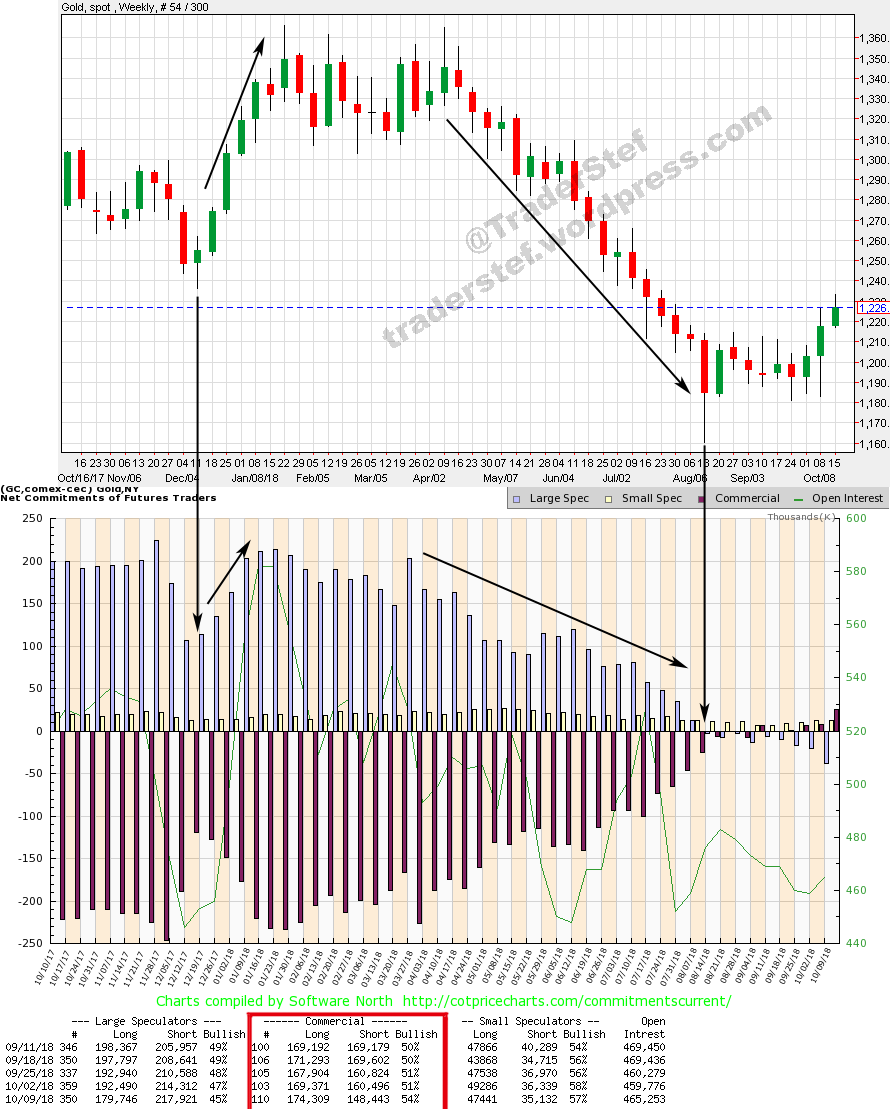 My article “Gold and Silver’s Saving Grace With a Sweet Spot Alert,” published on Oct. 4, included the following sweet spot alert posted on my website and Twitter feed on Oct. 2. 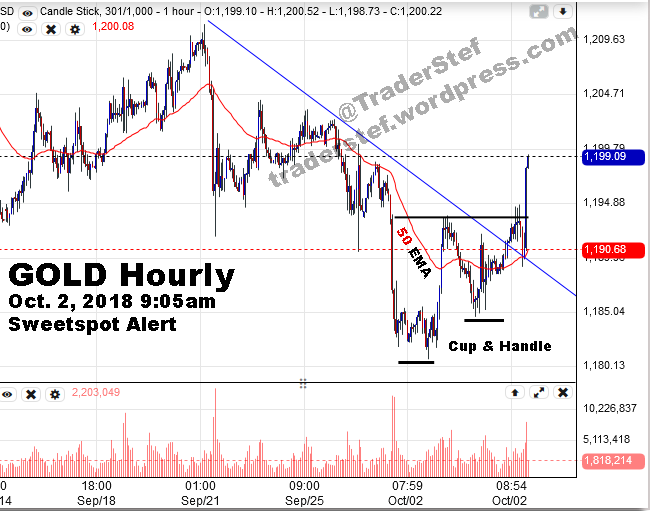 A few days later, on Oct. 7, I had the privilege of being a guest for another live, on-air interview on Operation Freedom with Dr. Dave Janda. We discussed gold and silver’s saving grace and other topics, along with gold charts that were not public. Here is the gold daily chart we discussed. 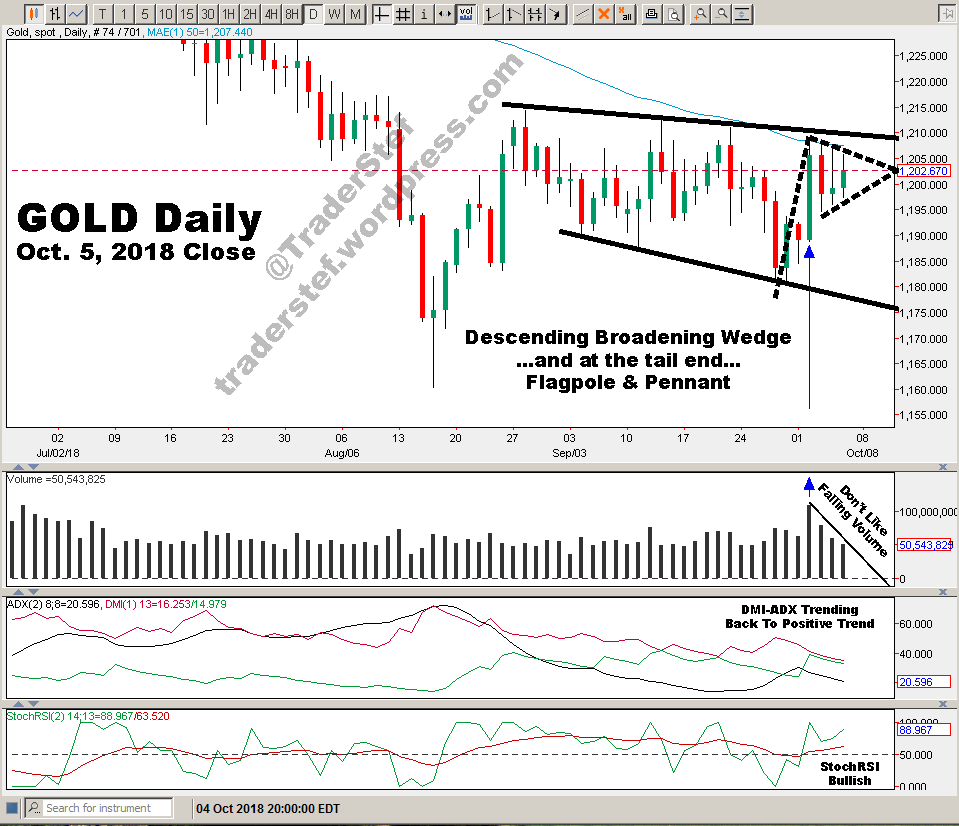 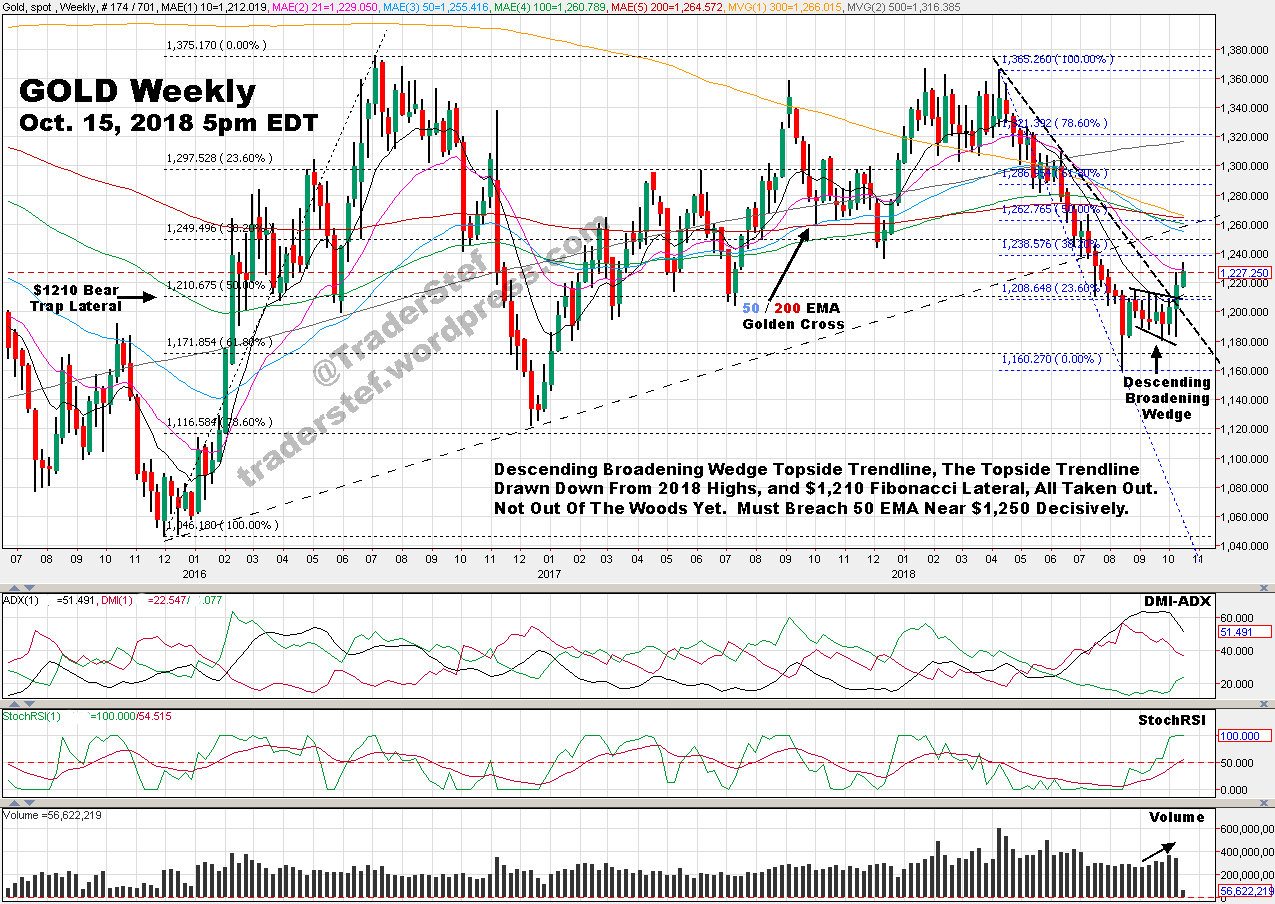 Gold printed a low of $1,160.27 on Aug. 16 and a high this morning at $1,231.33. Serious technical damage did occur with that break below the lower trendline drawn up from 2015, but a Golden Cross remained in play on the weekly and the pattern of higher lows since 2015 remain intact. The 50/200 Exponential Moving Averages (EMA) are now reversed but do not qualify as a decisive Death Cross due to upside price action over the last few weeks. However, the 50 EMA must be decisively breached to the upside on the weekly to avoid another negative midterm trend. The 50 EMA was left in the dust on the daily chart last week, along with the topside trendline of a Descending Broadening Wedge. The Bear Trap pattern with a Fibonacci $1,210 lateral appears to be in the bag, too, but would be more secure if the 50 EMA on the weekly is retaken. The DMI-ADX peaked and continues to break down from its negative trend, as the StochRSI reversed into bullish territory. The weekly volume is rising on the price rise and is positive. I remain bullish near-term and long-term, but neutral medium-term. Next target is a battle at $1,250 with the 50 EMA.

Here are a few articles to close out today’s analysis.