During my latest interview with Crush The Street following the 2016 Election of Trump back in November, I noted that markets would be Volatile.  The global geopolitical situation has ratcheted up with Syria and North Korea, most USA economic hard data is bad if not beginning to roll over, and we have USA domestic policy & debt where the Trump administration style of handling so many issues left on the table by Obama has global market players like Goldman Sachs scratching their heads and wondering what’s next.  Despite all the noise, the VIX Index has continued to trend downward and is currently sitting at or near historical lows.  But, there is a ‘new’ flavor of Volatility, perhaps one not seen since the days of Andrew Jackson which is why I’ve coined the new POTUS since February as TrumpTheJacksonian.  Note that ‘new’ portrait brought into the Oval Office… fuggetaboutit. 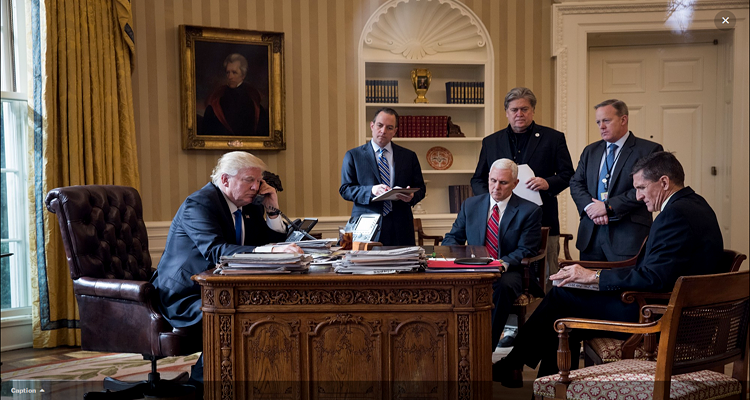 Sooo, enough about the mess left to the POTUS, as that topic deserves a whole post & book of its own.  Let’s move onto the main topic before the markets open in Asia.  If you’re not familiar with my Technical Analysis you can review a year and a half of time-stamped charts on my Twitter thread, and here is a link directly to the Gold & Silver Technical Analysis portion of my November interview. 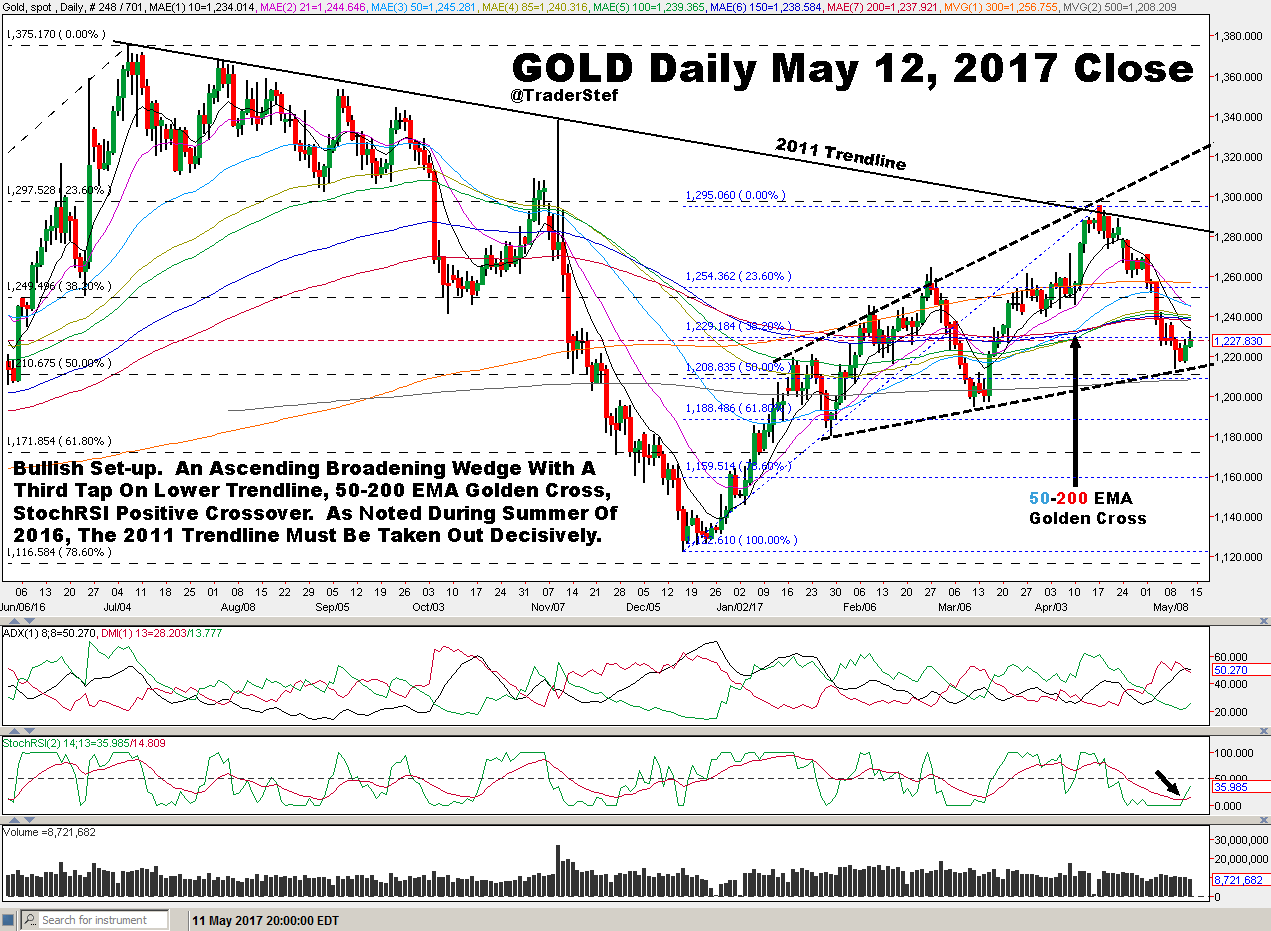 We’ve had some short term Volatility and a shallow dip as expected.  As per my warning given in the interview, the HUI ‘Gold Bugs Index’ was breaking down through the Neckline of a Head & Shoulders pattern which brought up the possibility of continued weakness in the Gold price, and it did.  Go take a look at a HUI chart from that week courtesy of GoldEagle.

Going forward, the Gold chart has developed an Ascending Broadening Wedge with higher highs and higher lows where price just tapped its lower Trendline this past week for a third time.  The StochRSI has turned positive, and a Golden Cross of the 50 & 200 EMA’s (Exponential Moving Averages) took place in early April.  We have the technical conditions for a Pivot upwards, but the rest of the world and its issues must line up with the stars for a sustained bullish move.  In order for Gold to continue onto the highs seen in 2011, the topside Trendline drawn down from 2011 must be taken out decisively on price & volume.  The longer it takes, the lower the price point becomes on that downward Trendline. 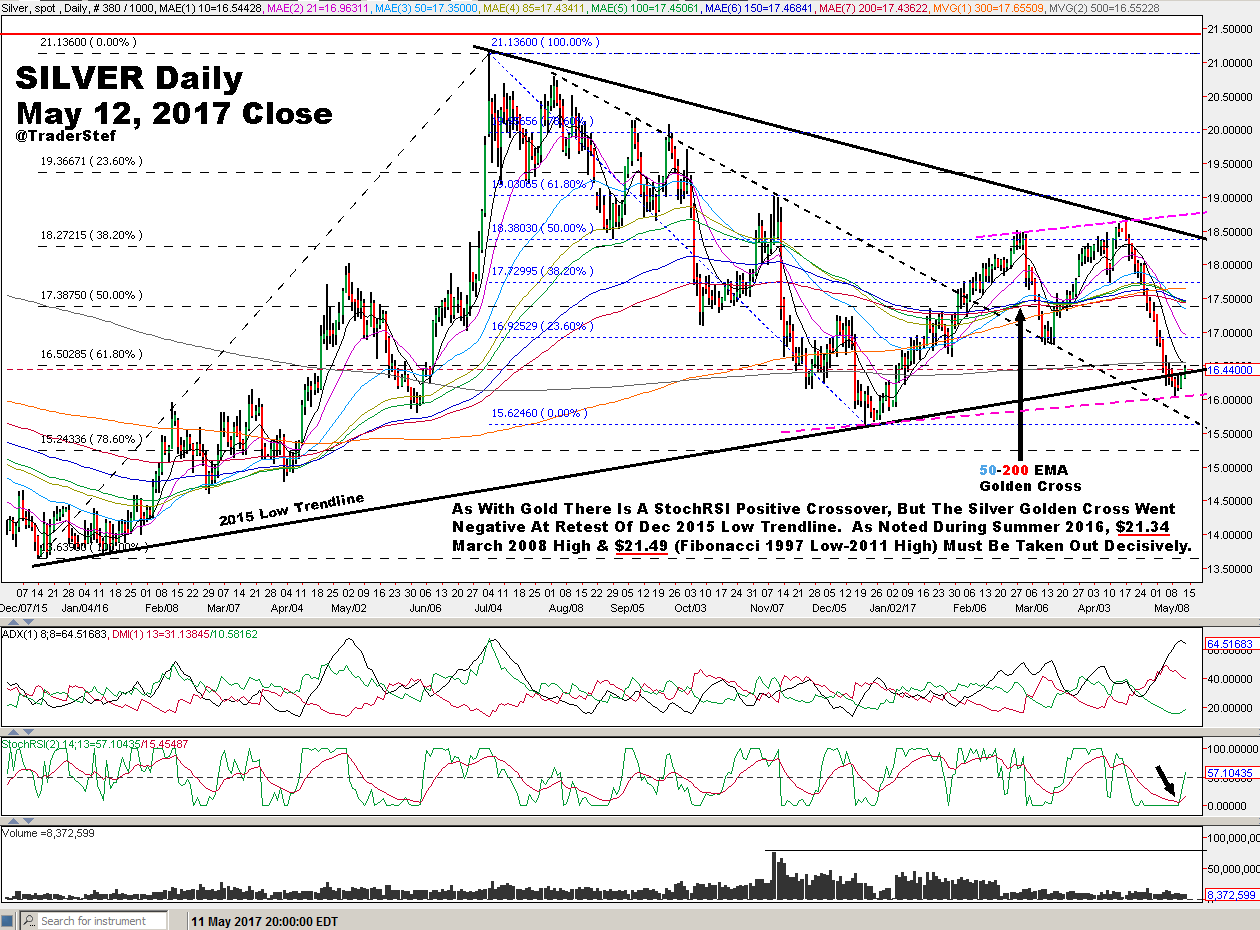 During the November interview I discussed the Inverse Head & Shoulders Neckline of around $16 which was taken out back in April 2016, and is now acting as a support area.  That price level has been tested twice since November.  Going forward, Silver also has support at the lower Trendline from the December 2015 lows.  The StochRSI has turned positive which is bullish, but the Golden Cross has briefly gone negative and Volume is pathetic.  Silver does not appear to have the strength of Gold at this time, but little brother usually catches up in the long run.  For the Silver bull to run back to its 2011 high and beyond, the laterals of $21.34 from its March 2008 High & $21.49 Fibonacci level (drawn from 1997 low to 2011 high) must be taken out decisively on price & volume. It tapped $21.13 last July, but didn’t have the strength to power onward.