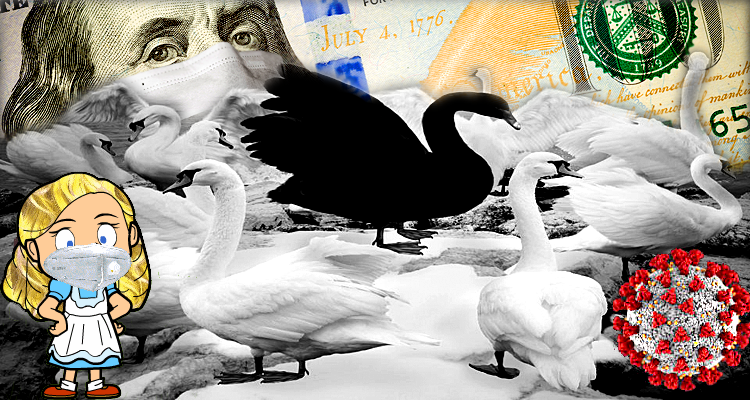 Uncertainty is the key word driving sentiment and reflected in a stock market correction since mid-October. In the days immediately following a breakdown in negotiations between Nancy Pelosi and the Trump administration on additional fiscal policy initiatives, several Federal Reserve officials gave speeches, wrote op-eds, interviewed in the financial media, and all of them failed to deliver a Goldilocks message to market participants.

Fed’s Rosengren says more QE may lack punch, fiscal power needed… … “‘Fiscal policy is the right tool for this time,’ Boston Fed President Eric Rosengren said during remarks Thursday after a speech he delivered at an online event hosted by Marquette University. ‘I think it’s tragic that it has not been employed already.’ President Donald Trump on Tuesday walked away from talks with Democrats amid differences over the size of another fiscal relief package. House Speaker Nancy Pelosi has since rebuffed his calls to pass relief legislation piecemeal. ‘It looks like it won’t happen until after the election,’ Rosengren said. ‘But hopefully, whoever is elected will nonetheless argue and get through Congress a significant stimulus package’… ‘Individuals and small businesses have been able to resume economic activity through substantial fiscal support,’ Kansas City Fed chief Esther George told an online conference organized by Wichita State University. ‘As the virus persists, and the funding provided to date dissipates, the recovery could stall.’” – BNN Bloomberg, Oct. 8

Fed’s Kaplan Doesn’t See Need for More QE Right Now… “Federal Reserve Bank of Dallas President Robert Kaplan discusses the outlook for the U.S. economy, the disagreements between the Republicans and the Democrats over a stimulus package, and the Fed’s asset purchases.” – Bloomberg Daybreak: Australia, Oct. 8

The Fed is really running out of firepower… “Unfortunately, the U.S. Federal Reserve is very near that point. This means America’s future prosperity depends more than ever on the government’s spending plans — something the president and Congress must recognize.” – Former NYFRB President Bill Dudley, BNN Bloomberg, Oct. 28

The RBA and the currency cage match… “In essence, the world’s central banks are playing a game of competitive devaluation – a currency cage match. That cage match got serious with the Fed’s move to flexible inflation targeting. That prompted a weaker US dollar that led other central banks to formulate similar plans to stem any marked appreciation of their currencies against the USD.” – Financial Review, Oct. 28

The S&P 500 fell 120 points (3.53%) and the Dow plunged 943 points (3.43%) today as the pandemic’s second wave is building worldwide and from a much higher caseload base in the U.S. than the initial Herald Wave, the lag time factor is in play with positivity rates beyond the 5% threshold with hospitalizations and deaths on the rise, and an effective vaccine solution remains elusive. The price of oil also fell sharply on expectations that energy demand will weaken along with the economy, and Treasury bond yields fell as capital seeks shelter. Economic sentiment for the U.S. and Europe is deteriorating quickly due to widespread lockdown measures in the news every day, more economic pain baked in the cake, riots and civil discontent taking place in the U.S. and the world, a failure of Congress to negotiate legislation for the CARES Act (part two) before the U.S. Nov. 3 presidential election, and fears over the election outcome with the potential for a contested vote that may extend for weeks. The Goldilocks narrative is back in quarantine until Congress ramps up the fiscal printing press again and the COVID-19 coronavirus threat finally recedes.

Let’s move on to technical analysis on the Dow and S&P 500. To view a larger version of any chart below, right-click on it and choose your “view image” option. 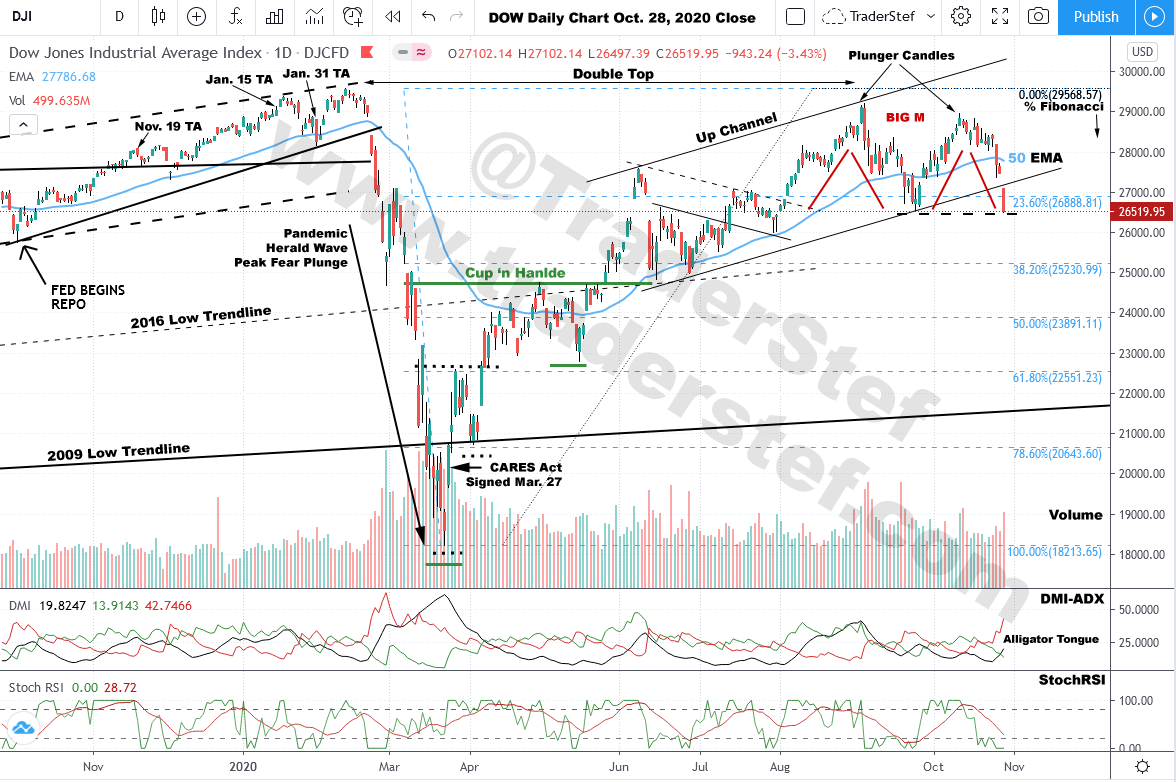 Excerpt from the Jan. 31 analysis:

“My expectation for the price action going forward with the Dow and S&P 500 is more bearish than noted on Jan. 15, 2020 (Part 2/ Nov. 2019 Part 1) with further losses on the table. There will be bouts of extreme volatility. Both indices are ripe for downside Scalping opportunities by seasoned traders. This is a good time for passive investors to have a money-market account in place and transfer the most vulnerable portion of a portfolio into cash, which will conserve capital while waiting for the correction to probe a bottom.” – A Bull Market and the Bear – Dow and S&P 500 Technical Analysis Part 3

Since January, the Dow plunged on initial pandemic fears to a low of 18,214 on Mar. 23, then rallied on the CARES Act legislation to a high of 29,199 on Sep. 2. The all-time high of 29,568 printed on Feb. 12, and we now have a Double Top and Big M pattern in play. Note that both peaks on the Big M printed a bearish Plunger candle. Today’s price action decisively left the 50 Exponential Moving Average (EMA) and lower trendline of an Up Channel in the dust and closed at 26,520 on top of the 23.6% Fibonacci level and a lateral support line drawn from Sep. 28. If this downside trend continues, the next bus stop is the 38.2% Fibonacci level at 25,231. The DMI-ADX has formed a bearish Alligator Tongue, the StochRSI has not yet bottomed and can remain in oversold territory for an extended period with volatile price action, and sell volumes are trending upwards with a falling price. All three studies are indicative of further downside. 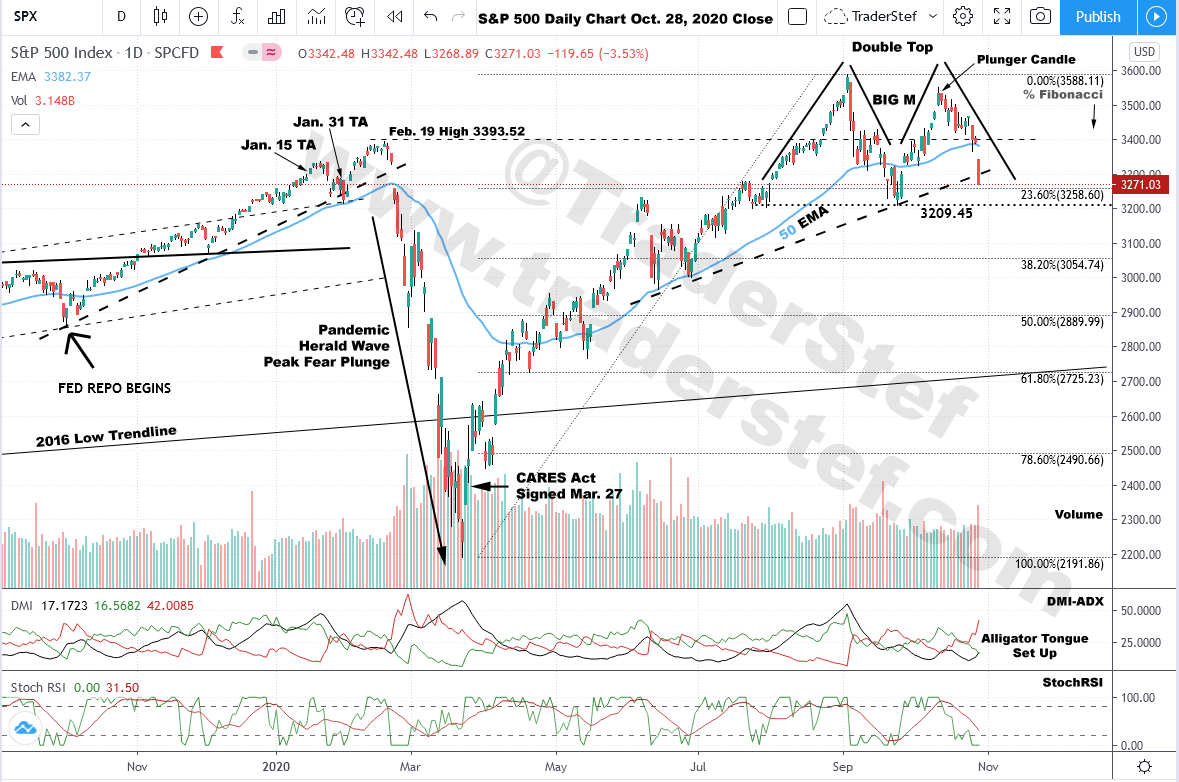 The S&P 500 chart is nearly identical to the Dow with a few exceptions. Since January, the price plunged on initial pandemic fears to a low of 2,192 on Mar. 23, then rallied on the CARES Act to an all-time high of 3,588 on Sep. 2. We now have a Double Top and Big M pattern in play after a new all-time high. The Big M printed a bearish Plunger candle on the second peak, today’s price action left the 50 EMA in the dust, and the price closed just above the 23.6% Fibonacci level of 3,259 and the lower trendline drawn back to the June 15 low. The studies are indicative of further downside. If the Big M baseline at 3,209 is decisively breached, the next bus stop is the 38.2% Fibonacci level at 3,055.

My expectation going forward for the Dow and S&P 500 is bearish in the near- and medium-term. There will be extreme volatility and the price action may pivot upward and find some support after the CARES Act sequel is resolved on Capitol Hill.

Lastly, the $VIX is spiking but has not yet reached the same levels that were seen in March. 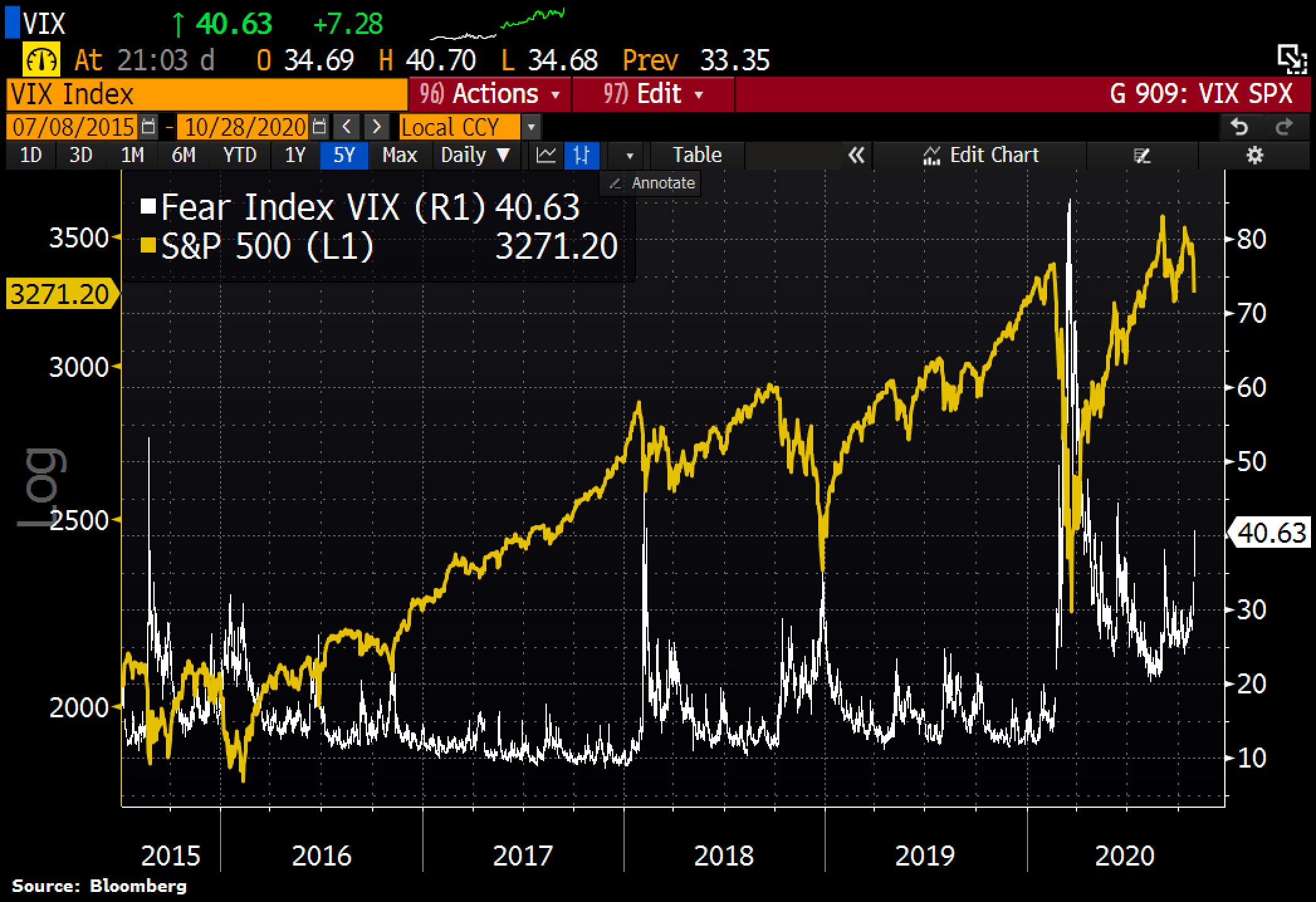 Below is a short video that sums up the extreme political division in the U.S. and the potential for a second American Civil War (audio link courtesy of John Bachelor). 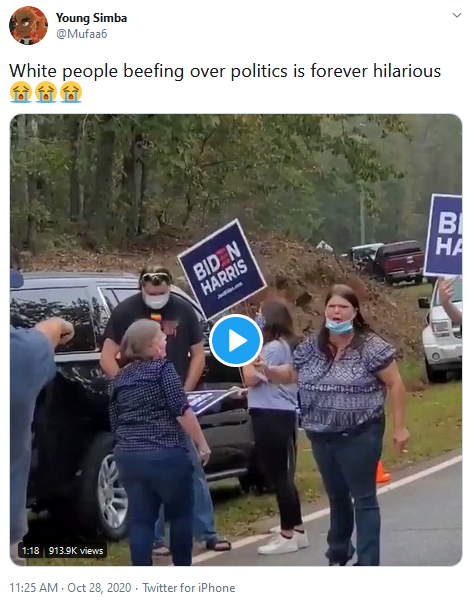 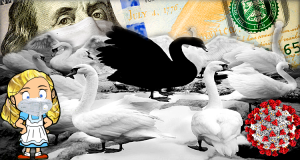